We must ask you once again to join us in mourning black trans women identified as the victims of murder. Kandis Capri, 35, was killed by gunshots on August 11th in Phoenix, possibly while trying to intervene in a domestic dispute. Elisha Walker, 20, of Rowan County North Carolina, went missing in October 2014. Police found Walker’s remains Thursday. They have taken Angel Arias, a known member of the Latin Kings street gang, into custody and charged him with her murder. 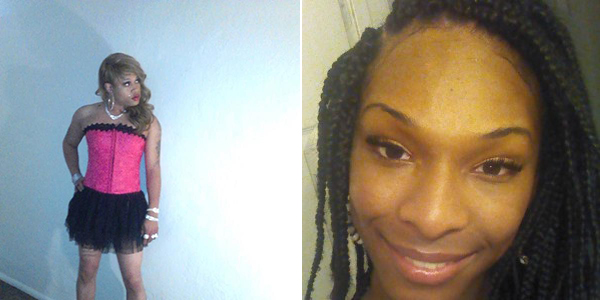 Media reports have provided few details about the women and their tragic deaths. In an interview with The Guardian, Capri’s mother Andria Gaines said she suspected her child’s murder might be a hate crime that occurred after Capri left a friend’s apartment to investigate whether her car had been towed. The two had a loving relationship despite Gaines’ initial resistance to accepting her daughter’s gender. Walker’s mother Rhonda Alexander said Walker was “always smiling and always had something sassy to say,” and said she is glad that Arias’s arrest brings some closure and justice for her family.

The news of these murders comes at the end of the week when we also learned of the murders of black trans woman Shade Schuler and black gender fluid trans person Ashton O’Hara. So far this year, 12 other trans women have been murdered. Almost all of them were women of color, and most were under the age of 30. They were Amber Monroe, 20; K.C. Haggard, 66; India Clarke, 25; Mercedes Williamson, 17; London Chanel, 21; Kristina Grant Infiniti, 47; Penny Proud, 21; Taja de Jesus, 36; Yazmin Vash Payne, 33; Ty Underwood, 24; Lamia Beard, 30 and Papi Edwards, age 20.

We also lift up the name of Mya Hall, a black trans woman who was shot by National Security Agency security guards after making a wrong turn into an incorrect exit, leading toward NSA headquarters in Baltimore.

This year so far, 15 dmab trans people — 16 when you include Hall, and 17 if you include Walker, whose date of death has not been confirmed by police — have been murdered, more than in all of 2014. This month alone we have learned the names of five black trans people who were murdered. Five times in two weeks, we have been confronted with the brutal reality of the violent consequences of transmisogyny and racism.

The hashtags #SayHerName and #BlackTransLivesMatter are lifting these trans people up while national media and many activists pay little attention. The most important thing we can do as a community is listen to trans women of color and respond to their needs. They cannot bear this weight, grief and anger alone. We must repeat the names of these individuals and demand justice for them. As Mey wrote after learning of O’Hara’s death:

There is an unchecked weapon of mass destruction moving throughout America that is aimed straight at the heart of trans women and dmab trans people of color. This avalanche of murders of Black and Latina trans women don’t seem to cause mainstream society to even bat an eye. We’ve already seen two more murders this year than all of last year and there doesn’t seem to be an end in sight. My heart is broken, my head is weary and I’m shaking as I’m writing this.

We must work together to dismantle systems that lead to these murders. We must fight against legal, systemic and social discrimination against trans women, especially trans women of color. We should read trans women’s words, support their activism and community development work and demand accountability from those who violate their rights and lives. Earlier this month Autostraddle published an excellent list of 24 ideas from trans Latina activist Lexi Adsit that break down some of the many ways the queer community must intervene to support, protect and celebrate trans women.

Trans women are being murdered, and that must mean the entire queer community is in a state of emergency. Today, say the names of Elisha Walker, Kandis Capri, and the 15 other dmab trans people our community has lost to transmisogynistic violence this year and commit to making the list stop growing.