The Leisha Hailey / Camila Grey Southwest situation has graduated from Internet sensation to television roundtable discussion.  Conan joked about the incident in his monologue last night and Sara Gilbert (resident lesbian over at The Talk) threw in a personal message from Leisha since they are tight IRL. The Hollywood Lesbian Scene is even smaller (and more incestuous) than your own posse, FYI.

Meanwhile, for those following kissing-gate, Southwest is now saying Leisha & Cam were thrown off the flight for cursing, not making out:

“Additional reports from our Employees and Customers onboard flight 2274 during a stop in El Paso on Sunday now confirm profane language was being used loudly by two passengers. At least one family who was offended by the loud profanity moved to another area of the cabin. Although we have reports of what Customers characterize as an excessive public display of affection, ultimately their aggressive reaction led to their removal from the aircraft. We do not tolerate discrimination against anyone for any reason. In this situation, their removal was directly and solely related to the escalated conversation that developed onboard the aircraft.“

To recap, please enjoy some Taiwanese anime of the incident in case you’ve been living under a rock for the past 72 hours:

During an appearance on Ellen this week, she revealed that she was diagnosed with breast cancer in February and underwent a double mastectomy, saying she didn’t want to take any chances of a recurrence. She tells Ellen that her original intention was to go in for breast reduction surgery and when routine pathology tests were done on the tissue removed during breast reduction surgery, cancer was found.

“I was very, very lucky because DCIS is basically stage zero cancer.  But cancer is cancer. I had the choice of, you can go back every three months and get it checked. Have a mammogram, MRI every three months just to see what it’s doing. But I’m not good at keeping on top of stuff. I’m sure I’m overdue for an oil change and a teeth cleaning already.  I have a lot of breast cancer history on my mother’s side of the family, which I didn’t know about.“

Despite her avid support for breast cancer awareness and fundraising, she added that she wasn’t sure about opening up about her struggle because she didn’t want to become a “poster girl” for the cause:

“How many things could I have? I’m black, then lesbian… I can’t be the poster child for everything! At least with the LGBT issues we get a parade, we get a float, it’s a party. I was real hesitant about doing this because, I hate walking. I got a lot of walks coming up!”

Ellen called paramedics to her studio on Monday after feeling “tightness and heaviness” in her chest Sunday night. She recounts the incident and reassures everyone that she is doing just fine: 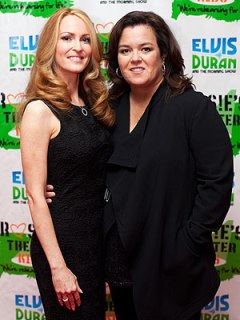 Has everyone season-passed the brand spankin’ new Rosie Show on OWN yet? Well, get on it because it starts Monday, October 10th! To coincide with the launch of the new show, she has debuted her brand new girlfriend (whom she met at Starbucks several months ago) at the Rosie Theater Kids Gala. I wonder if Tracy Kachtick Anders and her 6 kids are still living in the guest house?

Sean Maher (aka Dr. Simon Tam on Firefly) plays one of the closeted founding members of the Mattachine Society (one of the first gay rights groups in the country) on The Playboy Club and has just become the second out actor on the NBC series. He shares tales of his closeted Hollywood life with Entertainment Weekly and is super excited that “this is my coming out ball. I’ve been dying to do this.” He tells EW that although he was lucky enough to be a working Hollywood actor, he felt immense pressure from publicists to stay closeted: 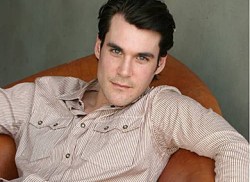 “…So that sort of started the idea of, okay, well, I’m working a lot, I guess I’ll just keep that gay part of my life on the back burner for now. I went so far as to sleep with women a couple times. It was a very confusing time for me. It was so exhausting, and I was so miserable. I didn’t really have any life other than work and this facade I was putting on. So I kept my friends from college [where he was out] separate from my work friends, and that was very confusing. I just kept going on and on painting this picture of somebody I wasn’t. I didn’t have time for a personal relationship anyway. And you just don’t realize that it’s eating away at your soul.”

Sean also has two adopted children with his partner of nine years.