The Messiah Complex cuts deep into the emotional, spiritual, and literal incarceration of Black people. It’s about the residue from slavery that sticks to our skin and lives in our spirits. This play highlights the ways that systems beget other systems, and how this kind of social control seeps into our relationships and families, until we find ourselves reinforcing violence onto each other, as an attempt to try to protect ourselves from the same kind of violence. This play tugs at the seams of our solidarity. And it explores what happens to us spiritually, when we collectively try to stuff ourselves into boxes that were never meant to fit our beautiful Black bodies. This play begs us to challenge the ways that normative constructions of Blackness, influence the way we live and love as queer Black people.

Born with a veil on her face, Messiah (played by Kymbali Craig) is a caulbearer, destined from birth to transcend and transform in ways she will not understand until later in life. The child of an ex-Panther, coming of age during the crack epidemic, Messiah is also a revolutionary. Nearly bringing herself up since adolescence, she learns various ways to protect herself from the coldness of this world — mostly because she has to. She loves hard, cares deeply about the people she loves and feels very protective over them as well.

Not yet sophisticated enough to understand everything that’s going on, Messiah is also struggling with her own issues and is left to emotionally fend for herself. So she learns early on that passing protects her, while simultaneously erasing part of her. She learns the pain of feeling split apart and split in half; before she is old enough to articulate why this world feels like too much to hold. Still, there is a way in which she knows that her road is bumpy because she was meant to travel a more complicated path.

Frustrated at trying to make sense of the emotional loss of her mother and the physical loss of her father (who disappears, but returns to her life at later times) the one thing she knows for sure, is that both of her parents are suffering in a way that her child heart can relate to, but doesn’t quite understand. And she’s terrified of learning what it feels like. So Messiah vacillates between feeling angry about the things that have happened and pretending they didn’t happen at all. On some level, she knows that closed mouths lead to closed hearts, but she must go through a process before she can open up. So she carries her secrets in her back pocket, like a safety pin poking through to her skin. Her silence is full of stories and her smile is full of sacrifice. 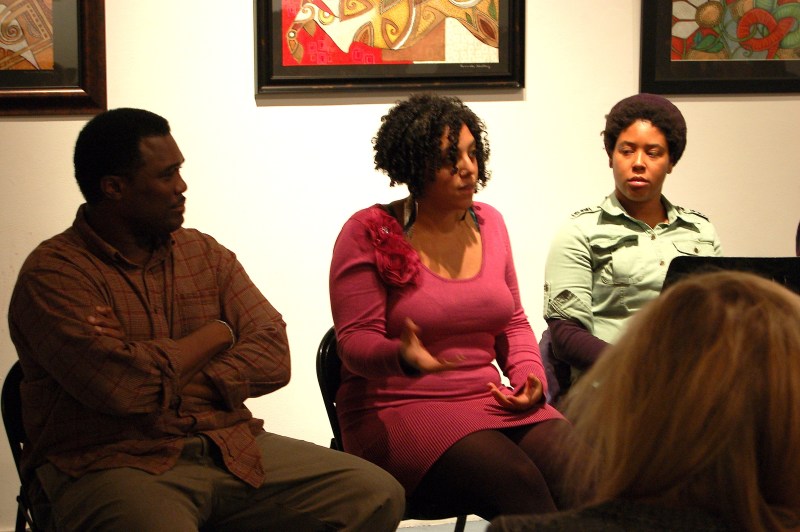 The Messiah Complex is radical because it takes on concepts of beauty, class differences, gender roles, and navigates love and life in a trans or gender-nonconforming body, within a Black context. Never before have I seen so many nuanced themes in an all Black cast. This play explores the ways in which we’ve maintained constructions of Black masculinity that don’t necessarily serve us. It explores how so many of us interpret the masculinity we see in our blood families as the kind we should later embody or seek to have in our relationships. It highlights the ways that Black masculine bodies continue to be appreciated for their sex, their anger, and their ability to protect; while leaving little room for their sadness, their vulnerability, and their need to be seen as whole.

In an accurate portrayal of relationship dynamics within a masculine/feminine dichotomy, we see this play out in Messiah’s relationship with her long-term girlfriend, Basimah. Basimah appreciates Messiah’s love, commitment, protection, and loyalty, but she also longs for Messiah to give her more — more gentle rawness, more range, and a display of emotions that expand beyond anger. Likewise, Messiah wants to give more to Basimah but struggles with the fact that Basimah is fed by many things in her life — not just their relationship. She wants to be Basimah’s all. In a tender moment, we see Messiah soften as Basimah strokes her hair and reassures her, “I gotta take care of my dreams like babies, but you my man.”

The Messiah Complex speaks to multi-level experiences of Black life, focusing specifically on trans and gender-nonconforming bodies, but it collectively encompasses all kinds of Black bodies and relationships — whether romantic, sexual, parental, or platonic. It deeply explores how limited ideas of masculinity and femininity, and constructions of “man” and “woman” hit us doubly hard as Black people and hurt us immeasurably deep as queer Black people. This play spits up and spits out the idea that any of us can escape the oppression that tells us there is only one way to be man or woman, or beautiful or powerful. And it shows us what happens when those of us who are most affected by these rigid constructions, get caught up in reinforcing them, as a means to survive in this world. This play is about negotiating emotional and physical survival, when people around you are barely hanging on. It’s about negotiating solidarity, when we are taught that allying with others has to mean losing some of ourselves. This play is about struggling to be who you are, and letting yourself expand when you realize you’ve outgrown the act of inflicting pain as a way to avoid addressing your own pain. It’s about realizing that people grow in different ways at different times, and knowing that your most valuable growth will come at a time when you’re less focused on what other people think and more focused on your commitment to being who you truly are in this life.

At various times throughout the play we hear Jay Z’s D’evils playing in the background, with the hook, (which borrows from both a Snoop Dogg song and a Prodigy lyric) “Dear God, I wonder can you save me…Illuminati want my mind, soul and my body” repeating over and over. And it is this combination of grittiness and rawness of ’90s hip hop that penetrates the audience’s ears and takes us back and forth between childhood Messiah and adulthood Messiah, now a woman in her late twenties, struggling with the unfinished pieces she has tried to lose along the way. Messiah is guided by spirits, but like many of the people in her community, she feels like she must continually make devilish deals instead of saving her own soul. She is in desperate need of a retrieval. She wants to feel more present in her body, but feels as though some of her is left in the tangled pieces of her childhood hands. With one parent now incarcerated, and the other an alcoholic, she is very much in touch with her childhood self. Her loneliness is familiar. But her power is tight in her adult hands. She just needs to open up.

The beat from D’evils is sampled from Allen Tousaint’s Go Back Home and The Messiah Complex is very much about coming home. It’s about the painful places we have to go to retrieve ourselves, and the painful existences we suffer until we do that. It’s about the ways in which we collectively suffer, when we fail to understand how we’re all connected. This life can either be circular or linear, depending on our paths. But everything we leave does not disappear.

In a powerful and painful scene, The Messiah Complex shows the same hands that once held their own body during an attack, attack another body as a means to protect themselves. This theme of protection and survival is present throughout the play. Messiah’s younger self and her older self are not that different. She eventually realizes that her childhood hands are also her adulthood hands. They’re just bigger and stronger. And they can hold a lot more. So she eventually makes peace with herself through a spiritual awakening that both apologizes and forgives. Ultimately, this play reminds us that we are bigger than our isms; alcoholism, addiction, as well as the self-deprecation that presents as internal racism, homophobia, and transphobia. We are bigger than the pain we feel ashamed of. We are more than what we do, when we don’t know better. But still, we have to do better — for ourselves and for each other.

Messiah does go away for a bit, but she later comes back. Like the birth veil suggests, she radically transcends. She holds her hands inside the hands of her love, now changed; she looks at Basimah and says, “Can I need you? I need you too.” Messiah was put here to transform and love. And she suffers because she feels cut off from that part of herself. But after a long and windy road, she returns. She has come back home, to her used to be.

Melanie is a freelance writer and poet in Brooklyn, NY. She enjoys writing prose about socialization and social constructs and the way they inform trauma, sexuality, and intimacy. She also enjoys writing poetry about want and wanting. Her writing can be found here: MelanieLauraSpeaks.com.