The River and the Mountain, by British playwright Beau Hopkins, might be the most dangerous play in town. That town is Kampala, Uganda. We all know Ugandan parliament wanted to kill the gays and no one can forget the brutal murder of David Kato, a prominent gay rights activist. We have an entire tag dedicated to Uganda. Uganda is not the safest of places to produce a play about at 29-year-old gay business man. But that’s what The River and the Mountain is about.

The play has been banned from Uganda’s national theatre because some government officials objected to it. David Cecil, one of the producers, told Associated Press that they were even banned from hanging posters there because the play had not been approved by the government. As a result, it is being performed at a little-known theatre in Kampala, the largest city and Uganda’s capital.  The protagonist, Samson, is a good man and a gay one. When his mother learns of his homosexuality, she tries to cure it by hiring a pastor, a private dancer and finally a witchdoctor. The play ends with his murder at the hands of his co-workers. Samson is a character that can be approached with empathy: “This could be your brother, your neighbor, your cousin,” said Cecil. And this in a country where homosexuality is illegal and the LGBT community is forced to live in almost absolute silence. The Washington Post highlights that there exists the constant fear of police raids that will shut down the production. Talk about a dangerous game. 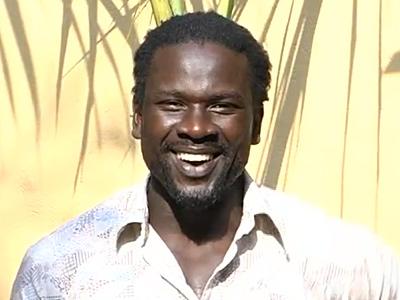 Samson from The River and the Mountain. via The Advocate.

Plays have a long history of inciting fear in governments and other powerful people that results in banning – look back as far as Molière and even farther. Molière, a French actor and playwright, wrote Tartuffe in 1664 and that was banned after being performed at Versailles for attacking and exposing the hypocrisy and deceit of the upper classes (aka, the King’s court.) People were afraid it would affect change, and wham, it was gone. And as you look through the history of theatre, you begin to realize that a playwright wasn’t tackling enough daring subject matter if they hadn’t been banned in some theatre somewhere. Theatre-goers have historically been a riotous bunch, so you can see where the fear would come from.

A modern audience member really recognizes the power of work on the stage to change the course of politics and daily life off the stage. Playwrights like Bertolt Brecht based their entire body of work off that power. And shows like The Laramie Project (about the murder of Matthew Shephard, a show that brought the discussion of hate crimes and trials to the nation) or The Vagina Monologues (dedicated to ending violence against vaginas and female-identified people) were written to directly engage with politics and to change the mindset of the culture around them, to explore territory that had not yet been explored. And by the way, both have been banned. And according to this article, banning may have helped the Vagina Monologues reach a wider audience. After all, what’s the first thing that happens when you forbid someone to take an action? All they can think about, all they want to do, is take that action. Banning a play is one way to get said play a lot of publicity. So is The River and the Mountain the next Laramie Project? I don’t know, it’s not available to read or see yet outside of their only production in Kampala (and believe me, I tried.) I’m not sure if the play is good, I’m not sure if the actors are good, but what I’m pretty positive about is that this work could play a part in affecting a slow, steady change in Uganda, if theatre history is to be believed. Someone is certainly worried about it.

So The River and the Mountain is the most dangerous play in town–for the status quo. For the oppressors. For every cog in the governmental machine that wants to kill the gays and for every negative opinion that keeps gays silent and gets them murdered. And if you want to find out where this production may lead,  you can go over to their We Fund page and suppor them.