Republicans claim to fight for the protection of lives, but the revised Senate health care bill released on Thursday indicates otherwise. Based on a previous version of the bill, the Better Care Reconciliation Act (BCRA) threatens to leave 22 million people without health care by 2026, according to the Congressional Budget Office. The CBO’s report of how much the revised bill would cost and how many people would lose insurance is expected on Monday. Defeating this bill is a matter of life and death to the transgender, gender non-conforming and intersex people of color (TPOC) who depend on Medicaid to survive.

“It’s just a part of genocide — people gentrifying our health care and taking it from us and telling us how we can have it and how we can’t,” Jade Dynasty told Autostraddle. Dynasty is a 22-year-old queer, trans mixed-race nightlife performer, producer, dancer, choreographer and activist based in Seattle who’s currently covered by Medicaid. 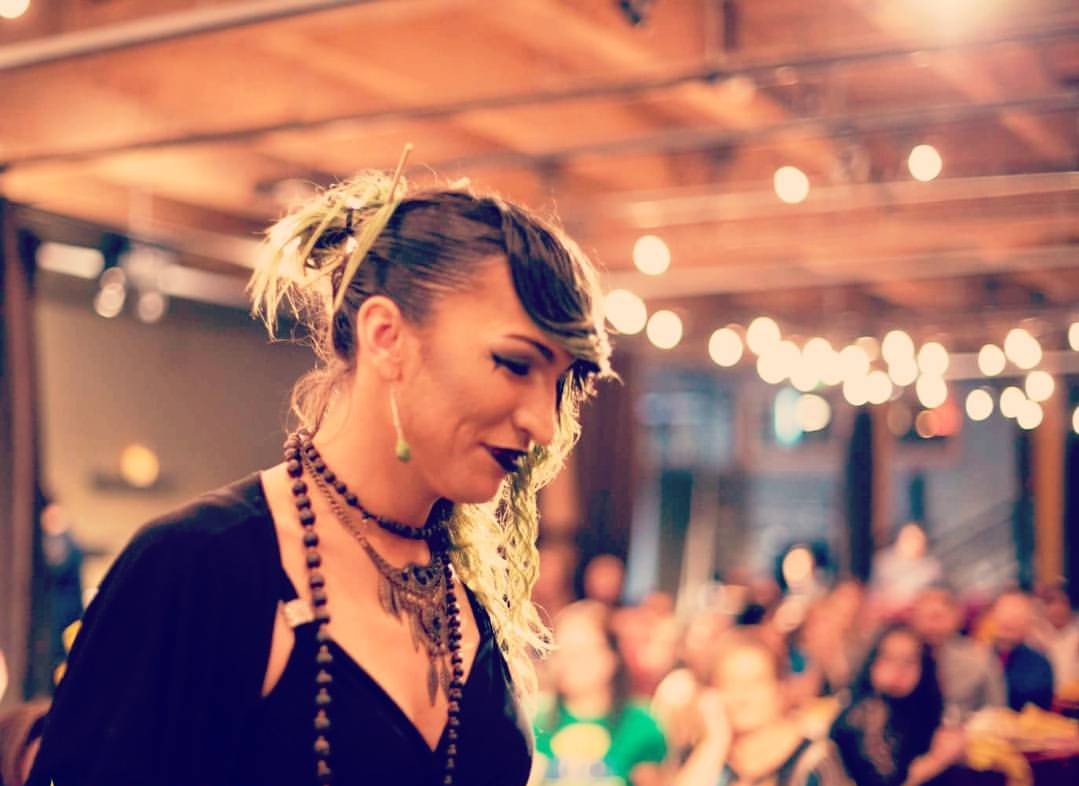 Dynasty benefited from the Medicaid expansion established in 2014 by former President Obama’s Affordable Care Act, also known as Obamacare, which allowed states to extend Medicaid coverage to adults without dependent children with incomes up to 138% of the federal poverty level. Washington is one of the 31 states (plus the District of Columbia) whose legislatures voted to accept federal money for the expansion. Historically, Medicaid was only available to single parents, disabled folks and low-income seniors but the expansion allowed more than 11 million people, including trans people, to become eligible and receive vital health care.

Under the new federal regulations, Medicaid was extended to any adult with an annual income of less than about $16,643. For comparison, before Medicaid expansion, eligibility was 100% of the federal poverty level or about $12,060. The expansion has been a lifeline for many queer and trans people, as they are more likely than non-LGBT people to live in poverty, especially trans people of color. According to the 2015 U.S. Transgender Survey, trans people of color — including Latinx (43%), American Indian (41%), multiracial (40%), and Black (38%) respondents — were up to three times as likely as the U.S. population (14%) to be living in poverty. In addition, the unemployment rate among respondents (15%) was three times higher than the unemployment rate in the U.S. population (5%), with Middle Eastern, American Indian, multiracial, Latinx, and Black respondents experiencing higher rates of unemployment. Thirteen percent of respondents to the 2015 U.S. Transgender Survey reported being covered by Medicaid; that’s ten percent more than in 2011 (before Obamacare).

If implemented, Trumpcare would freeze enrollment and gut $770 billion of federal funding from Medicaid in the next ten years, stripping health benefits from 15 million Americans.

“For people who are immigrants, of color, poor and who don’t have higher educations, it is hard for people to keep up with the potential roll backs and all the regulations changing. All laws should be accessible and clear for all people, and the uncertainty in the political climate only compounds the barriers facing the TGNCI community.”

Kyle Rapiñan and Stefanie Rivera, both directors at the Sylvia Rivera Law Project (SRLP) — a NYC-based legal representation and advocacy group named for the patron saint of trans rights — agree that trans, gender non-conforming and intersex individuals will be disparately impacted if Medicaid expansion is rolled back.

In a joint email statement to Autostraddle, Rapiñan and Rivera wrote, “For people who are immigrants, of color, poor and who don’t have higher educations, it is hard for people to keep up with the potential roll backs and all the regulations changing. All laws should be accessible and clear for all people, and the uncertainty in the political climate only compounds the barriers facing the TGNCI community.”

“The more ‘passable’ you are, the safer that it is for you in certain situations,” says Dynasty, who also notes that straddling the gender binary is more accepted in cities like Seattle that have protections for the trans community.

When trans people who rely on HRT cannot access it legally, turning to the black market for hormones may become their last resort. Several online pharmacy websites located outside of the U.S. sell illegal hormones. The SLRP wrote that when trans and gender non-conforming people are forced to obtain black market hormones, they are exposed to the risks of lifelong health complications and even death.

“‘Black market’ hormones are unsafe because they may not contain the hormones in the appropriate concentrations or may have been contaminated by unsafe handling and/or storage conditions,” Tangpricha said. “Even worse, the ‘black market’ hormones might not even have any hormones in them. The costs of hormones are relatively inexpensive and many free care clinics are now providing transgender medicine services. I highly recommend that people seek help from a medical professional to obtain low or no-cost hormone therapy.”

While Washington is one of 12 states to ban exclusions of transition-related care, such as HRT, in both private health insurance and Medicaid coverage, TPOC in the state who access health care still encounter racist, transphobic health care providers who are incompetent in trans issues. Dynasty says she’s had only one doctor, a cisgender white woman (she’s never had a trans doctor), in Seattle treat her like a human being, but the doctor can rarely see her because her clinic is across town from where Dynasty lives.

Zoe Samudzi, a 24-year-old writer and PhD student in medical sociology with an emphasis on trans health care at the University of California San Francisco, says that preventative care becomes difficult for trans people when they anticipate experiencing transphobia or trans-antagonism where they have to teach doctors.

“Trans folks have to be both the patient and the educator,” Samudzi says. “When it comes to trans folks of color, all of these structural issues around gender identity get compounded by these experiences of racism.”

“We have a responsibility as cis folks to do the work to dismantle these systems of domination that we are beneficiaries of and that we’re complicit in.”

Studies on trans people and health care are usually biased and often dreary, but they aren’t able to measure the enormous amount of resilience within TPOC that enables them to survive. Dynasty is just one of countless TPOC who unapologetically advocate for what they need within community and on a legislative level. They shouldn’t have to fight for basic human rights and cisgender people who identify as “allies” or “accomplices” have a duty to speak up when their rights are under attack, a principle Samudzi applies to her research.

“I am the beneficiary of this biomedical system that marginalizes trans people and makes my cis body a superior body,” says Samudzi, a cisgender queer Black woman. “We have a responsibility as cis folks to do the work to dismantle these systems of domination that we are beneficiaries of and that we’re complicit in.”

In their email statement, SRLP staff wrote, “Trans people and gender non-conforming people should be afforded high quality medical care and should be free from harm — we all must keep organizing to prevent state and interpersonal violence.”

This is what it will take to secure affordable, accessible health care and safer spaces for all TPOC. A quick action you can take is calling your senators and urging them to vote “no” on the BCRA and then asking all of your friends, co-workers, and schoolmates to do the same. Make your calls as soon as possible because Republicans are trying to rush the bill to a vote. If you have more time on your hands, get creative with your resistance, like the 60 disability rights activists who staged a die-in outside of Republican Sen. Mitch McConnell’s office on June 22 to oppose the bill. You don’t have to get arrested like they did, but at least use your talents and your privilege to be in solidarity with TPOC.

And if all else fails, Dynasty suggests that cis people can always help TPOC in their community take care of themselves by giving them money.

TPOC need our money, and they need it now. Far too many TPOC such as Princess Harmony, a 25-year-old Afro-Latina writer based in Philadelphia, are forced to raise money on crowdfunding sites simply to survive. A social worker is currently helping her obtain Medicaid, an attempt that will be for naught if Republicans get their way. While the fight against the dismantling of Medicaid is most urgent, we can’t forget that universal health care should be our long-term goal if we truly believe that health care is a human right.

“I think that the only health care reform bill that’s truly good for QTPOC is the Medicare for All bill that was introduced in Congress,” says Harmony.

According to National Nurses United, Medicare for All is a health care system that would require each state to “set up and administer comprehensive healthcare services as an entitlement for all, through a progressively financed, single-payer system, administered by the states.” Single-payer health care may be our best hope for the future, but unfortunately, Trumpcare is our immediate present. Trans people, especially TPOC, have enough to worry about without losing their health care.

It’s time to fight like hell to prevent the GOP’s latest bill from becoming law, just like Sylvia Rivera fought for liberation for us all.