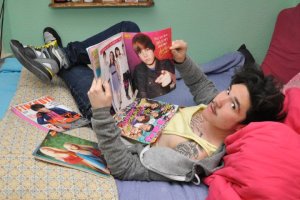 New York Magazine’s Transmen and the City talks about “gay guys who love ex-girls, and other Brooklyn permutations.” At first this looks like just another queer trend piece, and maybe it is, but we’re gonna focus on the fact that William Van Meter spent nearly an entire paragraph talking about how cute Amos Mac looked sipping his coffee on a recent trip to Brooklyn. Earlier today on the twitter machine, Amos noted that parts of the article weren’t entirely accurate.

For the record, Amos’s chest tattoo does not read IDENTITY, but rather LIFESTYLE, and has nothing to do with his trans identity at all. When we asked him to elaborate, he told us it was an inside joke. “An inside joke across my chest, yes, but whatever, it’s my body.” In case you couldn’t tell, it’s the little things like this that make us love him so.

The article posits that “many” transmen prefer to date women and goes on to describe a recent trend of trans guys dating / hooking up with queer male-born guys. This quote from just such a male-born guy sums up our thoughts pretty nicely:

“It’s juvenile to have a fear of biological woman parts and this idea that they make the gender of a person. People are attracted to other people. Part of being young and queer is you don’t need to put yourself into boxes.” – Ben Riskin

We actually do appreciate that a mainstream publication like New York Magazine would approach the topic of transmen and their culture with this sort of enthusiasm, even if it means that parts of the article weren’t perfect. But hey, it happens! Ten points for trying! Then again, we get yelled at for posting a Trans / Genderfuck / Stud gallery, so what do we know?

In case you missed it, read Laneia’s interview with Amos Mac for Autostraddle, in which he candidly discusses transitioning, feelings, and his kickass zine, Original Plumbing. San Francisco-area readers can attend the Original Plumbing Issue 3 Release Party at Eros on Wednesday (tomorrow) night, by the way. You’re welcome.

Related: This same issue of New York Magazine, which is generally one of our favorite magazines, includes a bar guide which features the best bar for younger gay men, the best bar for older gay men and the best gay crossover party but not a single lesbian bar. We went to the Nightlife Awards, we read GO, we know they exist!

AS FAT AS I WANNA BE:

You Are My Sisters: “Marginalized groups must work to resist the tendency to devalue or bristle over any member whose actions might be viewed as “making the rest of us look bad”. The work to end all forms of oppression does not involve policing group members to ensure they are “on message”. Ending oppression – be it fat or racial or gender or whathaveyou – requires an active commitment to resist any cultural messaging seeking to frame one member of a marginalized group as representative of all members – regardless of whether the framing presents the members in a negative or positive light.”

Maureen Dowd has a lovely little op-ed piece on SCOTUS nominee Elena Kagan that we think is supposed to be funny but is really just complete rubbish. (@nytimes)

Salon talks with the author of  She Looks Just Like You, a memoir about being a gay parent. – “Non-biological lesbian moms, like gay fathers who use surrogates, we’re in this weird zone between motherhood and fatherhood.” (@salon)

Iranian Lesbian Filmmaker Denied Asylum In The UK – “In Iran, the punishment for lesbianism involving mature consenting women consists of 100 lashes. This punishment can be applied up to three times. After a fourth violation of Iranian law, a woman convicted of “unrepentant homosexuality” is finally executed by hanging, often publicly, in front of a howling mob.” (@blogout)

ESPN’s Jeremy Schaap spoke with several South African women soccer players who were beaten and raped because they are lesbians. This is known as “corrective rape” and, according to one advocacy group, there are 10 new cases of corrective rape weekly in Cape Town alone. The most publicized case took place in 2008, when Eudy Simelane, a 29-year old out lesbian soccer player, was beaten, raped and stabbed to death. When asked if he cares about the lesbians who are raped, a young African man had this to say (from ESPN’s Corrective Rape, video below):

“Why do I care maybe for a person who likes to be like me? ‘Cause I’m the man. God created me to be a man. I have everything to be a man.”

The website PeaceWomen.org put together a really informative report in 2009 that you should read, bookmark and share – Hate Crimes: The Rise of Corrective Rape in South Africa (pdf). To learn more about Eudy’s story, watch this short video: A Story of Corrective Rape. Impressive to see this sort of coverage coming from such an unlikely source as ESPN.

Taqwacore Culture at South by Southwest – “Sena Hussain, describes herself as an ‘openly queer drag king and lead singer of a Taqwacore band.’ The best word to describe Hussain is unrepentant: “I’m not going to hold back…or hide anything really. I don’t care what kind of trouble I get into for it.” “(@racialicious)

They totally named the project after Neville’s frog (@feministing)

Lebanese Woman Wins Miss USA – “Fakih shows young Muslim and Lebanese girls that they too can be considered beautiful. Yes, part of a fucked up system of beauty, but this is still a meaningful change.” (@feministing)