Last night was the Democratic Presidential Town Hall, in which Bernie Sanders, Hillary Clinton and Martin O’Malley spent time “taking tough questions from voters on the hottest issues within their party and across the heartland.” If you aren’t interested in really paying attention to all that, you could also just watch the 30-second video promo that introduced the candidates by having them declare their main issues in a dramatic fashion; it basically sums up the important stuff.

CLINTON:  I am not going to let the Republicans rip up Obamacare.

O’MALLEY:  We should make it hard for criminals to get guns and easy for all Americans to vote.

A Town Hall is substantively different than the debates because the candidates are answering questions from actual voters, not just a debate moderator, and also because the Iowa Caucus, a major milestone in the election cycle, is so close — just a week away!

Most of the voter questions highlighted — they had to be chosen and vetted by the town hall, so this wasn’t a totally democratic (in the literal sense of the word) event — were more or less what you’d expect. Voters asked Sanders to clarify and defend the “socialist” label so citizens could feel more comfortable with it, and pressed him to explain how he’d pay for all his social programs. He answered that while citizens would end up paying more in taxes, they wouldn’t really mind because it would be offset by how much less they were paying for services like healthcare, which would be socialized. Sanders also doubled down on his plan to increase taxes for the wealthy despite accusations of bolstering “big government,” arguing that fairer distribution of wealth and free education are more important. 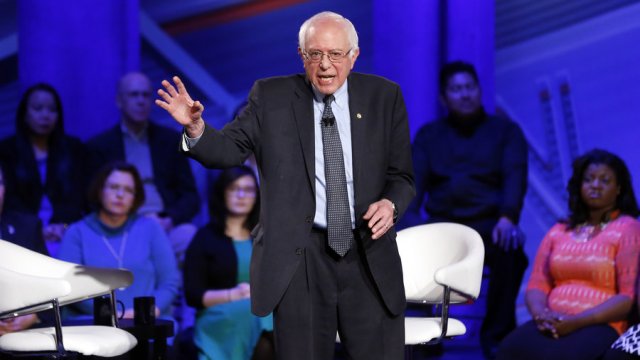 Bernie also got a chance to defend himself about his statements that Planned Parenthood and HRC are “establishment organizations,” a stance that disgruntled many voters who support Planned Parenthood and were annoyed to see the organization, deeply embattled this year, portrayed as such. He did reiterate his support of Planned Parenthood, but did so by insisting “no, no, no, no” at the woman who asked the question, implying she hadn’t understood what he REALLY meant and ultimately being kind of patronizing as he reminded her of his voting record on the right to choose. He argued that his plan to raise the cap on taxable income, which would impact women, actually made him a better candidate for women than Hillary, and that Hillary’s record on the Iraq war and the Keystone pipeline were points in his favor. He also says he’s going to release his medical records before Iowa to reassure voters who worry about his age and health, so if you’re dying to know Bernie’s cholesterol, great news for you.

O’Malley was given a chance to explain how he’s “planning to ensure racial equality when your history in office contradicts your current platform to fight structural racism,” which he did… I don’t know, he did some kind of job at. He mostly championed himself for putting away drug dealers, a record that’s sort of inherently reliant on police power, but also pointed out that he decriminalized marijuana, “banned the box on people who are applying for state employment,” and repealed the death penalty. He also talked about climate change as a key issue, comprehensive immigration reform with a pathway to citizenship, and increasing wages. He got one super fascinating question about beginning and diverse farmers and how to support the agricultural economy in a time of migration away from rural areas, which I really appreciated! O’Malley’s response was that he wants to reduce barriers to entry in farming through the Farm Bill, and push back against agricultural monopolies while incentivizing beginning farmers to farm. In maybe the most honest question of the night, moderator Chris Cuomo asked who O’Malley would tell his supporters to get behind in the caucuses if O’Malley doesn’t get enough support to make it farther. O’Malley said they should… stay strong in supporting O’Malley. Okay then! 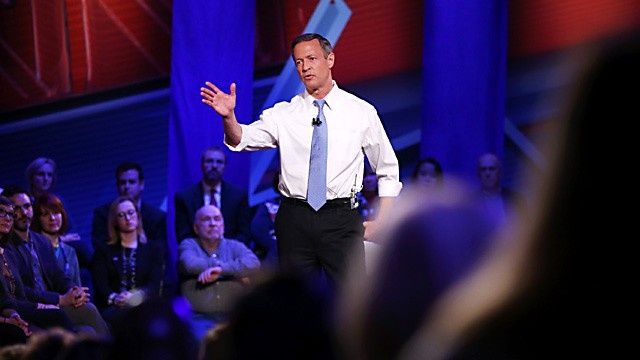 You keep going straight past the old abandoned barn, and take a right at the Walgreens, NOT at the post office

Hillary responded to discussion on the amount of criticism she’s received so far in the race and her support amongst younger voters — “People have thrown all kinds of things at me. …I just keep going forward… They throw all this stuff at me and I’m still standing. And you have to say to yourself, why are they throwing all of that? …Because I’ve been on the front lines of change and progress.” When asked what she would do for income inequality, Clinton reiterated that she has a strong record on ALL kinds of inequality, which is not actually a great answer to that question (“what’s so great about your lasagna recipe?” “WELL have you had my spaghetti??”)

Asked about how interventionist she’d be in terms of foreign policy as president, Clinton said that military action should always be a last resort, and also that America should “use the enormous capabilities that we have to project our values around the world, our cultural values, our freedoms, our human rights, and respect for the dignity of all people,” which sounds arguably interventionist. She told stories about working with both US and foreign governments to avoid military action and try to negotiate diplomatic solutions, which stands in sharp contrast to what Republicans are currently emphasizing. 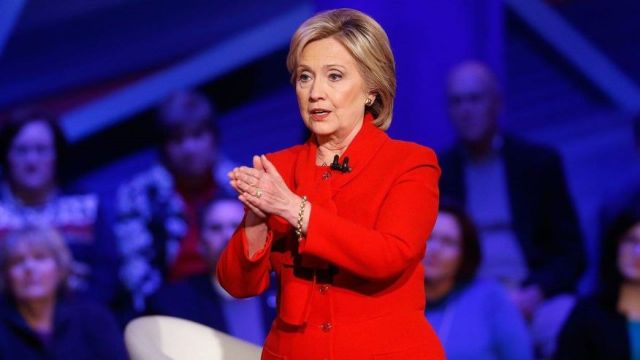 One of the most important questions asked of Hillary was from a Muslim-American vet named Erin Tariq-Monir — “How can we make sure that the United States today is — that we protect the constitutional rights of all groups of people without marginalizing any one community?  Specifically as a mother of three young children, as an American Muslim, how can I make sure that this country is the best place on earth to raise my family?” Unfortunately, Clinton’s answer didn’t give very substantive solutions — she decried Trump’s Islamophobia and said that we need to “stand against it,” but not what that would look like on a cultural or legislative level, and then morphed the answer into talking about Somali-American families she’s talked to who are “trying to protect their children from radicalization,” and how important it is to include Muslim nations when fighting against ISIS, which is a pretty far sidestep from the question of how to improve life for marginalized communities in the US. Hillary also got a weird take on a question that most candidates got, which was about how they would work with Republicans when in office, but the version posed to Hillary asked about “what is it inside you that can separate the human feeling of doing the Benghazi hearings, and then going back to that same group of people and saying, “OK, you know what? Let’s put that in the past.” Does it seem like coded language to ask the only woman candidate how her “human feelings” will impact the situation, plumbing whether she might be overly emotional or not emotional enough? Perhaps! Clinton’s response, which was “Well, I don’t know, I came out pretty well so I think it’d be very gracious of me to go back and talk to them” was a clever answer that didn’t invite further speculation or sound overly defensive. She also stayed strong on issues of Benghazi and her emails, reiterating that she’s done nothing wrong and that “my best defense is the truth.”

On the whole, the focus on a single candidate for an extended period of questioning rather than pinballing between them in a debate format showed them all in an interesting light — certainly it was beneficial for O’Malley, who doesn’t shine as bright as Clinton or Sanders in a debate, and who may have had his best performance of the race in this Town Hall. There was also added pressure on all candidates, though, in the sense that when they had time to talk instead of being compressed into quick twenty-second answers, we had more time to scrutinize and critique their responses rather than just hearing the soundbites. Who this benefited and who this hurt is probably more a matter of which candidate’s platform you already agree with most, but it’ll be interesting to see how it impacted any undecided voters in Iowa, who will have the chance to go to a caucus in a week. Until then!