Spoilers below for Tig Notaro‘s heartthrob helicopter hunk in Army of the Dead.

Zack Snyder’s new Netflix zombie-heist movie Army Of The Dead opens on the immediate precipice of a zombie outbreak in Las Vegas. A very Snyder opening montage ensues, complete with slow-motion gore, topless zombie showgirls wreaking havoc on a casino, a comically inept military response, average folks rising to the top as heroic zombie killers, and an eventual quarantine that boxes off Vegas from the rest of the world, trapping the remaining undead inside. The movie then truly begins when one of those average heroes is tapped by a nefarious rich dude to pull off the heist of a lifetime: He and his self-selected team of heist movie stock types must enter the city of the dead and break into a casino vault and retrieve millions of dollars in cash in order to change their lives. Of course, it also means they have to re-enter the city they violently fought their way out of and face the creatures that haunt their dreams. Oh, and also they’re racing against the clock because the American government is set to drop a nuke on the quarantine zone to contain the zombie problem once and for all.

The movie combines some of my favorite tropes from both zombie and heist movies, and while a two-and-a-half hour runtime should probably be illegal for either genre (90 minutes is the gold standard), I was on-board throughout. Army Of The Dead satisfies two specific formulas at once. There’s the requisite Assembling Of The Team heist movie sequence. There’s the requisite Dorky Guy Ends Up Being Pretty Decent At Killing Zombies zombie movie arc. Sometimes it’s nice to know exactly what you’re getting out of a movie. I watched with my girlfriend—a certified zombie movie enthusiast—who turned to me throughout to say “X is going to happen” and then X did indeed happen. Somehow this wasn’t annoying at all! It was just a nice, goofy time. And the fact that we could both accurately predict outcomes and “twists” felt like listening to a pop song for the first time and finding yourself already singing along to the chorus after only hearing it once. The familiar can be fun. 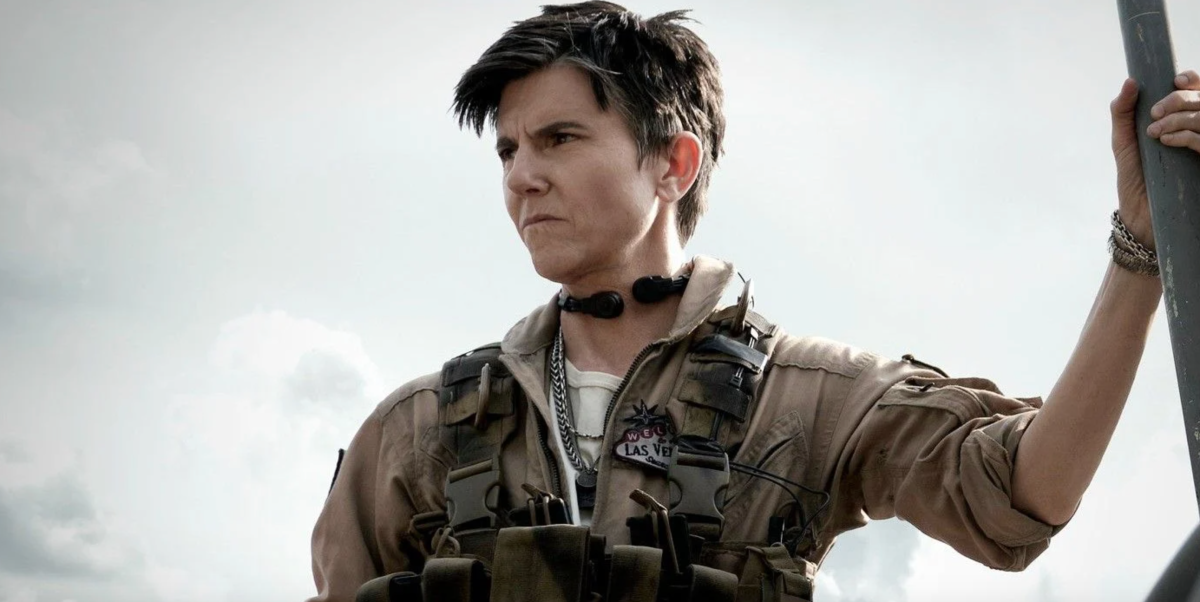 Army Of The Dead also did have a few special stunts up its sleeve, like a zombie tiger (cool), zombie horse (even cooler), and a zombie fetus (eh, more confusing than cool, but you know what? I’ll take it). It’s stylized, trashy, bloody action with just enough interpersonal drama (a father reconnecting with his daughter! an honestly ridiculous romance that swiftly ends with a snapped spine! unlikely friendships! betrayal!) to make these characters feel like slightly more than just players in a game.

But you are reading about this movie on Autostraddle dot com, so I have to imagine you have come here for one reason and one reason only: Tig Notaro. So in lieu of a full review of this movie, I am here to answer your pressing inquiries about Tig’s role in Army Of The Dead.

Who does Tig Notaro play in Army of the Dead?

Tig plays “the helicopter guy,” which is how her character literally refers to herself when she’s being recruited by Dave Bautista (oh yeah, wrestler-turned-actor Dave Bautista plays the team leader in the movie, and in addition to being action-movie rugged, he is also SENSITIVE, which is conveyed by the fact that he wears glasses and attempts to rebuild a relationship with his daughter). Upon checking imdb, I have discovered her name is Peters, which I’m sure is said at some point in the movie, but honestly? Character names do not matter here. What does matter is she is the helicopter guy, making her a key member of the heist crew because she’s their only way out of the walled city. When Sensitive Dave Bautista approaches her on an airfield and says he has a job for her and her cut will be $2 million, she agrees immediately, zero questions asked. She knows what she wants, and what she wants is $2 million.

How much of Army of the Dead is Tig Notaro in?

Pals, the answer will probably disappoint you. You see, Tig was actually a last-minute replacement in this movie. The role was originally played by Chris D’Elia, but following the lawsuit that alleged he pursued and exploited underage girls, Snyder cut him out of the film. Enter: Tig, who might not have been the obvious choice for the role but who was absolutely the obvious choice for the role. Sure, she has never done action before, but it turns out she was straight up born to be the smart-talking lovable asshole who gets the job done in a heist movie.

But because of the last-minute change and the difficulty of reshoots given COVID-19 filming restrictions, Tig ended up having to film most of her scenes with a green screen. So she’s delivering a stellar comedic performance without any of the other actors even being there! And while it’s visually pretty apparent this is the case, it works, because Tig makes it work. I mean, she’s used to working a stage on her own in her standup career, so it makes sense that she’s able to work a set all on her own. You can read more about the filming/editing process (which is honestly quite interesting!) on Vulture.

Tig basically does four things in this movie: 1. Stands/leans while smoking a cigar and looking hot 2. Wisecracks with the team while looking hot 3. Fixes a helicopter while looking hot 4. Flies a helicopter while looking hot. While her screen time is minimal, her presence is essential. First of all, she’s literally important as the only getaway option. But she also injects humor and weirdo fun, even though her character is limited in how she can interact with the team because of the filming constraints. And she does it all while serving a Top Gun butch look that steals scenes all on its own.

I don’t like zombie movies, but I want to see Tig Notaro. Should I watch the movie?

Honestly no???? Zombie movies are a very specific subgenre of action-horror, and if you typically don’t like the devices and tropes employed by that subgenre, you’re not going to like this movie! There’s blood, guts, bones, and brain matter. Zombies and humans alike are shot up, slashed, eaten, beheaded, crushed, and blown up. Mythology ends up being actually a little more robustly developed in this movie than in your typical zombie flick, but if you’re someone who needs answers to every question raised and who gets caught up on the logistics of sci-fi/horror, you’re probably going to feel unsatisfied.

This is a tangent, but it’s worth noting it’s also a very typical zombie movie in the sense there’s a social commentary/metaphor to all the zombie-killing and wide-scale infestation but it’s simultaneously not that deep. Vegas is the perfect setting for this get-rich scheme that is naturally rigged against its players. Traumatized and uncompensated for the heroics they once displayed during the zombie wars, this team’s motivation for entering a zombie-infested hellhole is, simply, the money. And I think the straightforwardness of that motive is actually a sharp critique of capitalism and the rigged systems that dominate American life. These characters are going to get rich or die trying. It’s the ultimate high-stakes gamble. But if there’s one thing I’ve learned from season four, episode six of The L Word, it’s that the house always wins.

So anyway, even though there’s (slightly) more than just blood and guts splashing across this film, you’re still not going to be into it if zombies are simply not your thing. And as mentioned, Tig plays a relatively small—though crucial from a plot and tone standpoint—role. Something you could do if your thirst outweighs your aversion to gore is what I like to call the Closeted College Kayla Netflix Method, which is where you pause the movie at the beginning and slide your cursor along the bottom of your stream and watch the little preview box until you catch a glimpse of Tig and watch her scenes only. Her scenes are typically not the ultra-gory ones. And yes, this method is named thusly because it is the way I often rewatched episodes of The L Word when I was closeted and in college, skipping through to watch only the sex scenes because I was lonely and horny.

Does Tig Notaro do anything gay in Army of the Dead?

I mean, arguably, yes. Leaning on things while wearing aviators and smoking a cigar does not exactly give off a heterosexual vibe. But no, she does not textually have a girlfriend or wife. She does not make out with anyone. But look, zombie movies aren’t exactly known for compelling romance, and when they do feature kissing, it’s usually swiftly followed by death. Army Of The Dead is simultaneously sexless and hypersexual in the way I often find super stylized action movies to be. In these types of movies, everyone is sweaty, muscled, and hot but also uncomplicated avatars whose bodies are impossibly resilient and skilled. The physical fantasy of it all and the detachment from real bodies ultimately stymy the sex appeal while at the same time over-eroticizing the subjects. The erotics are pretty bare and untethered from emotion. But again, as with the clean-cut satisfaction of a specific plot formula, there’s an obvious appeal to that. And as someone who has a long history of thirsting over action characters, it is very thrilling that this particular mussed-hair heartthrob is played by a 50-year-old lesbian. More please!

How many times do I have to say THIS IS A ZOMBIE MOVIE? I think you probably know the answer. Few characters survive in this genre. Without completely spoiling the specifics, I will say Peters lasts a good long while. And her demise is action-packed but not very gory. And even though there’s a small amount of blood, I do think one could make a solid argument she is not dead but just unconscious when we last see her???? But again, it’s a zombie movie. Almost everyone dies and even those who live aren’t exactly thriving. But I can assure you Tig’s character does spend much of this movie very much thriving! She isn’t as tortured or tragic as some of the other characters are. She’s mostly doing helicopter shit and being a hunk, and I love that for her.