Hello, ladies and gentlenerds, and welcome to this recap of Legends of Tomorrow episode 604, Body of Squid aka The One with Aliyah O’Brien.

We open this week in 1962 Cuba, where an alien pod crash lands. And the soldiers sure are surprised when not only do they find something that doesn’t look much like a missile at all, but also that there are tentacles inside.

Meanwhile, an alarm interrupts the Legends’ morning activities: sleepy, no-make up Zari 2.0 looking too much like Original Zari for Nate’s caveman brain, Behrad having a weed gummy snooze, Spooner working out. 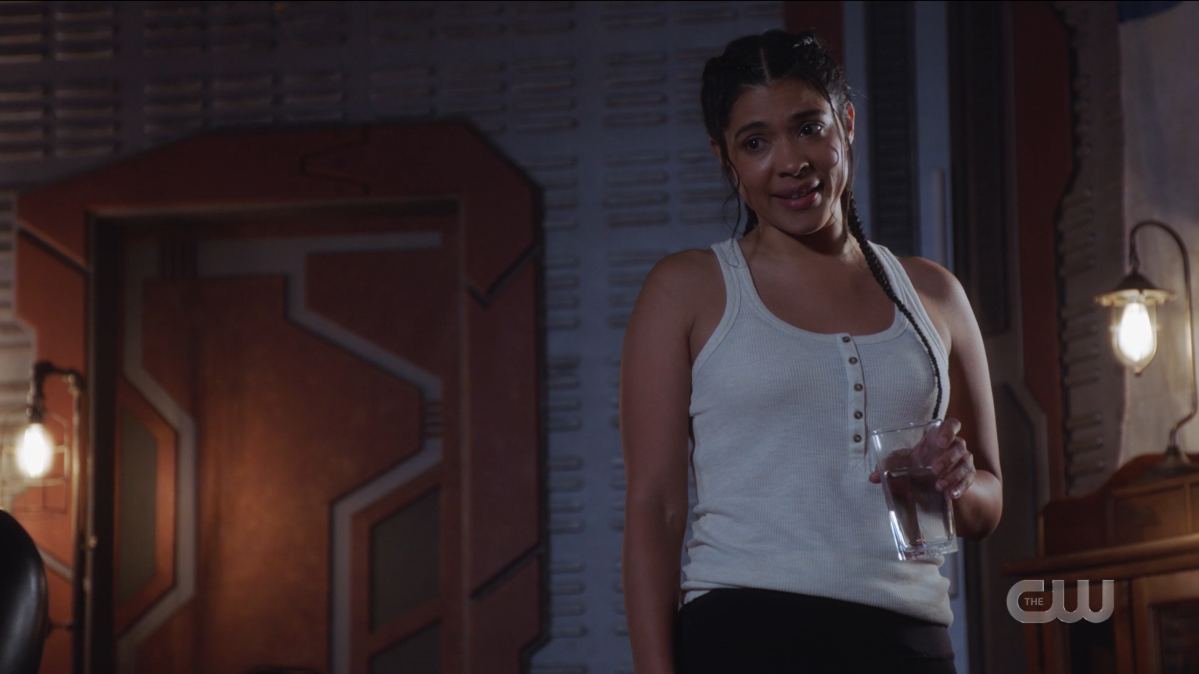 It was like she could sense my thirst for her.

Gideon says it’s not her doing, and Mick calls everyone to the bridge for a team meeting. He’s all cleaned up and says he has a lead on the alien they think will lead them to Sara’s location.

Ava is so excited she could scream. 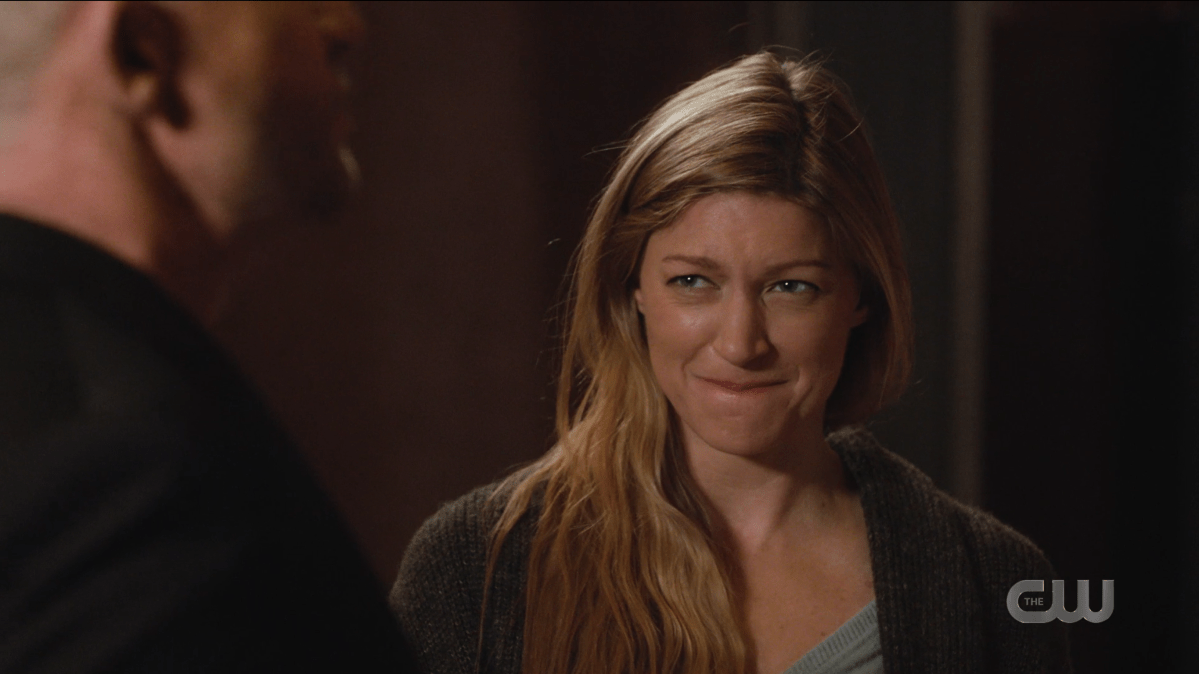 It’s always nice when someone else actually contributes to the group project.

Instead, she hugs him. They land in Cuba and as Spooner looks around at everyone rushing out to a mission in their pajamas, she asks why they didn’t just go back an hour earlier, or wait to go back until everyone was changed, but Zari explains that questions like this are answered by the principle of “totems shmotems” aka the hand-waving you grant sci-fi shows, especially re: time travel. We’re not here for the metaphysics.

They realize they forgot the snoozing Behrad but decide to press on anyway. They steal some trucks and shoot some guns, much to Spooner’s delight and Zari’s chagrin. 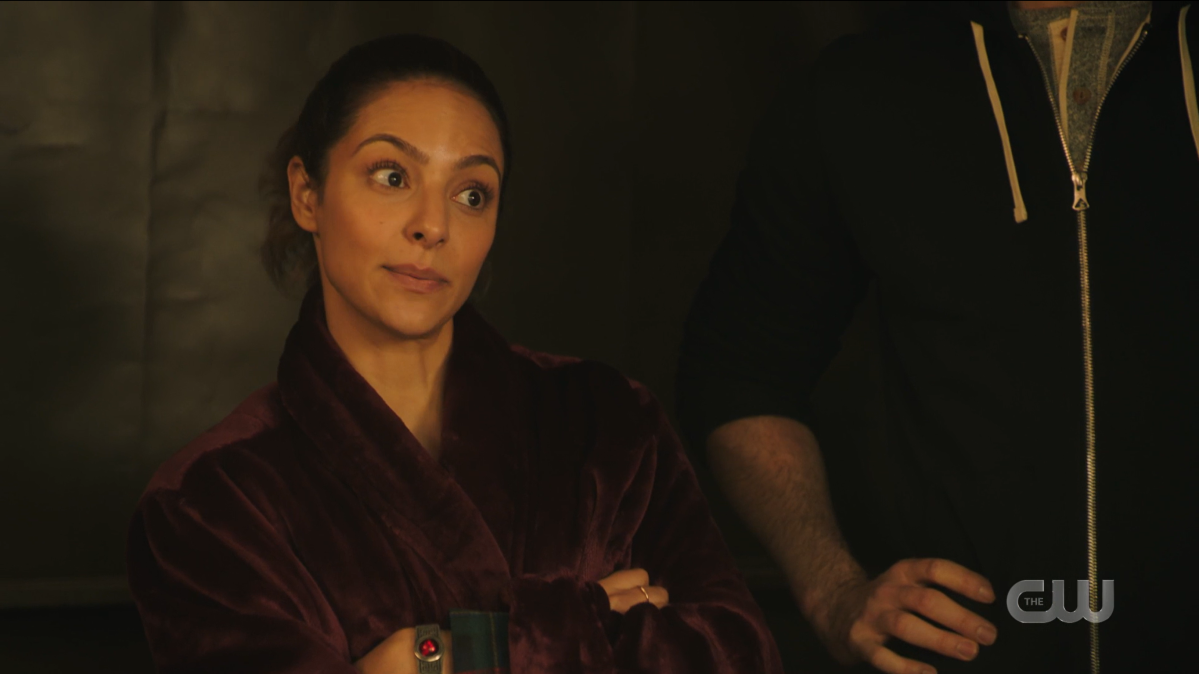 When they clear the scene and open the crate to inspect the alien pod, they realize they didn’t find the pod, but a missile. They realize with horror that they are smack dab in the middle of the Cuban Missile Crisis, and Ava is suddenly regretting letting Mick take point on this mission.

So the team splits up, Nate and Zari going to Washington to try to keep history on course, Ava finds Behrad and takes him to go to try to track down the alien, and Mick and Spooner sent to return the missile to the Russians they stole it from.

I feel bad that Zari became a whole new Zari and started dating a whole new man that isn’t good enough for her, and in this episode she STILL gets stuck with Nate. I especially feel bad because this week is Nate making friends with the boys’ club and even though Zari proves herself to be the most useful person in the room on more than one occasion, it was kind of a bummer she got stuck in the middle of it.

In more fun/typical shenanigans, Behrad poses as a soldier and Ava poses as a Russian doctor who specializes in aliens to get onto Fidel Castro’s base of operations. 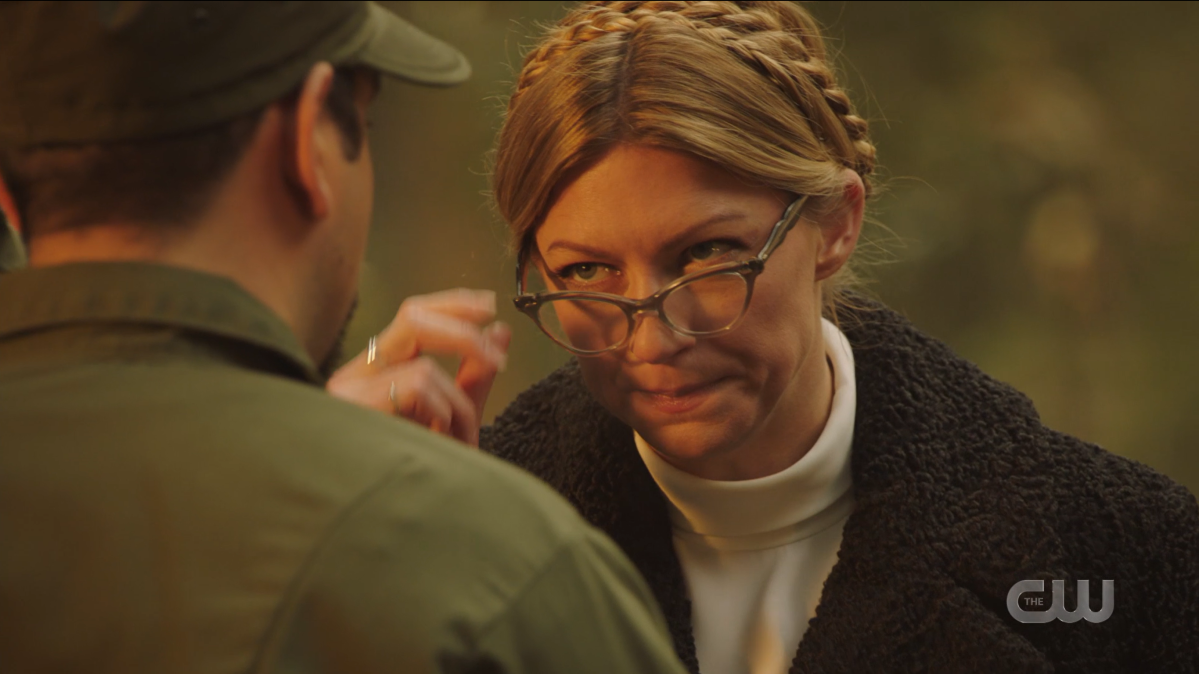 She gets led right into an operating room and is asked to start cutting, and the gush of silver blood immediately makes Behrad sick and Ava panic. Behrad runs out of the room to be sick and by the time he calms down, he is swept away into Fidel Castro’s office being mistaken for Che Guevara. Knowing he couldn’t pull that fake-out off, he instead insists he’s Che’s cousin, Jay, and is welcomed by the Commandante with open arms.

Things in the Oval Office start to take a turn as the President starts to buy into the military’s call for nuclear war, mostly because of the Legends’ meddling. I’ll be honest I mostly tuned out all this DefCon stuff because I feel the same way Zari did about the whole situation, which is mostly, huh? I’m here for the aliens, not the politics!

Speaking of aliens, with her new stint as Doctor McSteamy going horribly awry, Ava decides to dose everyone with the nitrous oxide. 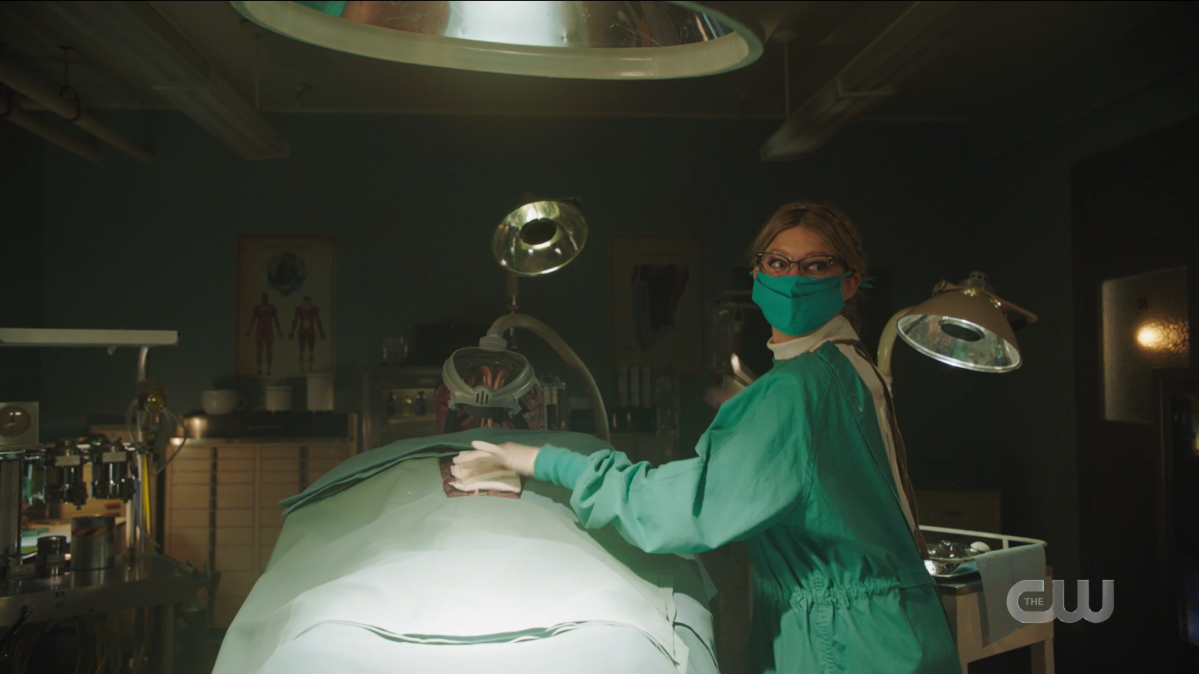 “Doctor doctor, give me the news, I’ve got a bad case of loving you.”

Now, I’m not 100% sure why she didn’t also go down; is she immune as a clone? Was she just maintaining her breathing better since she knew it was happening? Unclear, but again, totems shmotems. Once everyone is out, she kidnaps the alien and makes a break for it.

As she wheels the gurney for dear life, Spooner can sense the alien is waking up and she can tell it is PISSED. 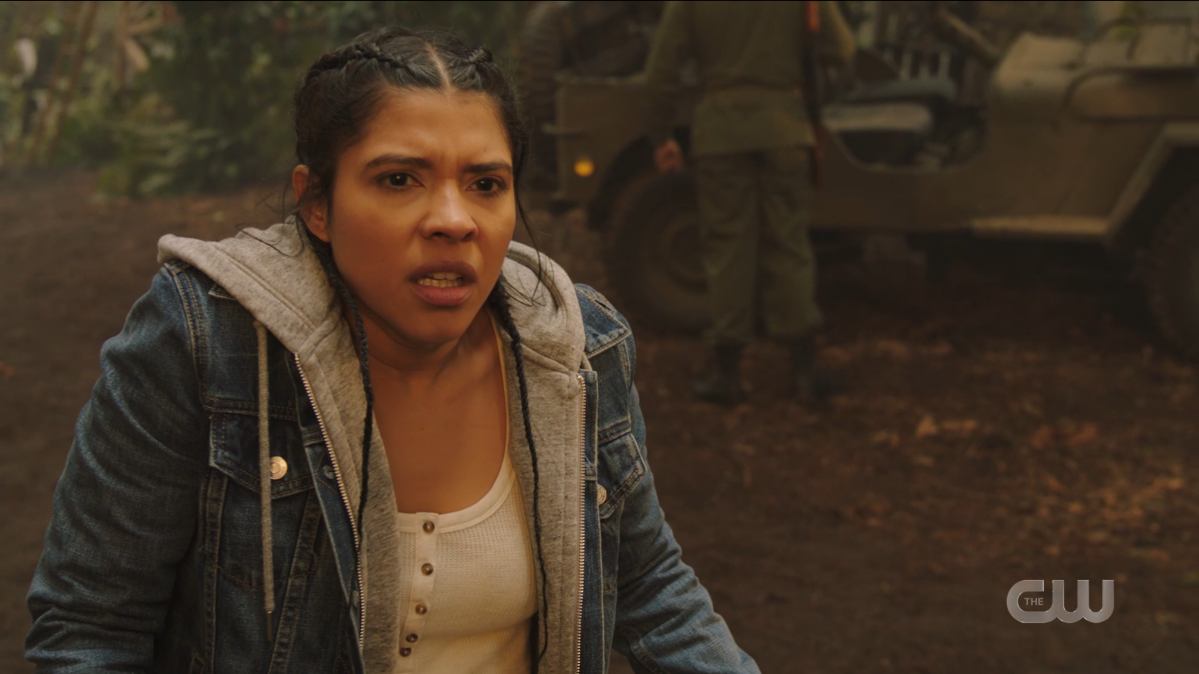 And luckily Spooner follows those feelings to find Ava and the alien before it makes lunch of our favorite lesbian time traveling clone.

In a surprisingly more chill situation, Behrad and Fidel Castro are eating weed gummies together. Behrad sings him a song on the guitar about hopping on the peace train, but that’s pretty quickly derailed when the alien makes an appearance and Fidel Castro thinks it was sent by the Americans. He decides to launch a missile, so Behrad sends his team a message telling them that whatever their plans are, they better hop to.

Ava starts to panic and she lashes out at Mick; she put him in charge and he made a lot of mistakes and now they might have just started World War 3. 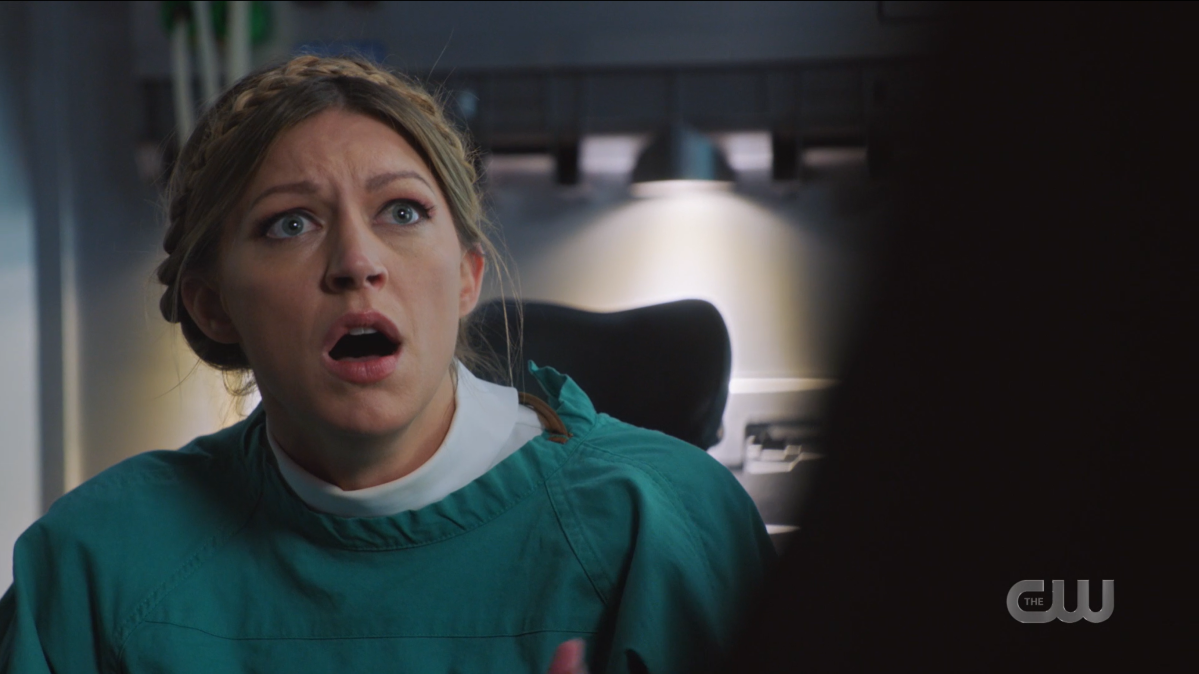 This is my face when I scroll through twitter half the time.

She lashes out at Mick and tells him that they have to fix history first and save Sara later. Mick asks if he’s supposed to go back to just being the grunting hot-head he was before and she gives him an exasperated yes and storms off.

Spooner and Mick go off in search of the alien, and Spooner doesn’t think Ava was right about Mick. She knows what it’s like to have a grumpy shell, she knows there’s likely a softer center underneath. But before they can get too deep, Spooner senses the alien nearby. But her alien senses are getting stronger and she can not only sense that it’s nearby, she can sense what it feels, what it wants…what she’s thinking. 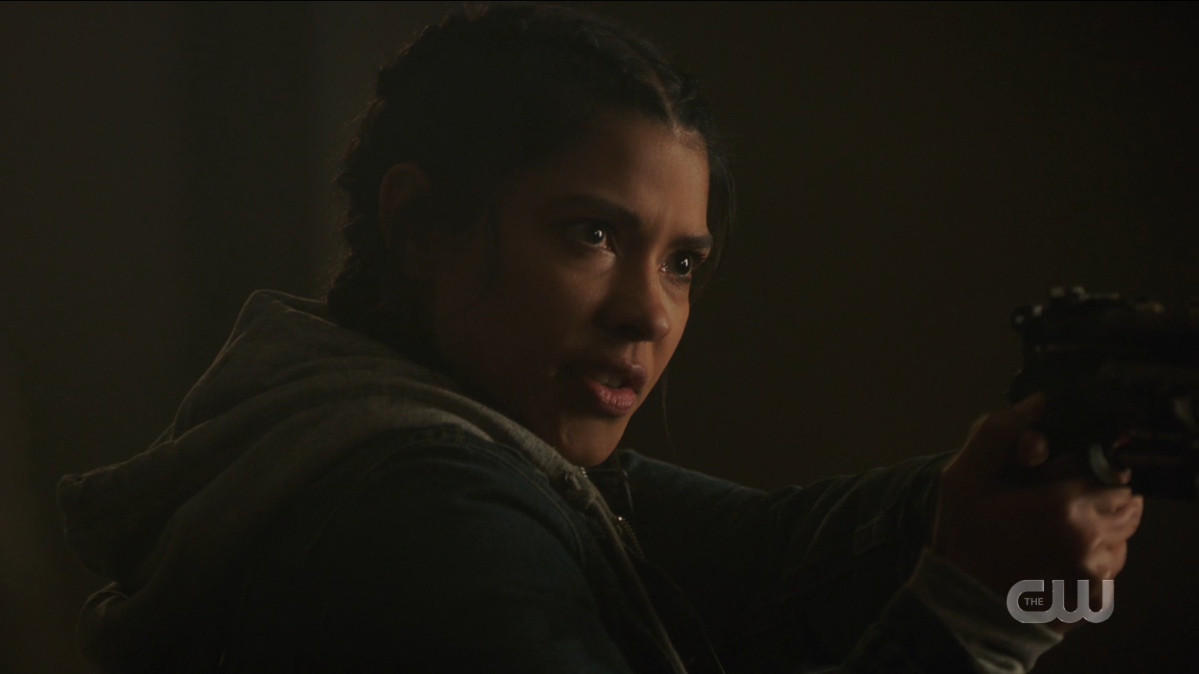 I appreciate that sometimes it seems like Spooner is off in her own Alien movie.

Spooner says that this alien wants to get off this planet and is considering trying to use the missile to do it. Mick is immediately hostile, yelling at the alien that she wouldn’t be able to use that missile to do anything but die. She tentacles him and he says he has a spaceship of his own, and Spooner can tell she understands him but just doesn’t trust him. Which, frankly, same. He offers to take the alien to her spaceship in exchange for Sara’s location, and she asks what kind of fuel his ship takes because this trip is going to be a long haul.

Back in the Oval Office, the military men get word that Castro fired his missile, and they literally play football with the buttons to the nuclear codes to return the favor. Honestly I wouldn’t be surprised if this really is how life or death decisions are made in Washington but honestly I was about as interested in the situation as Zari was. 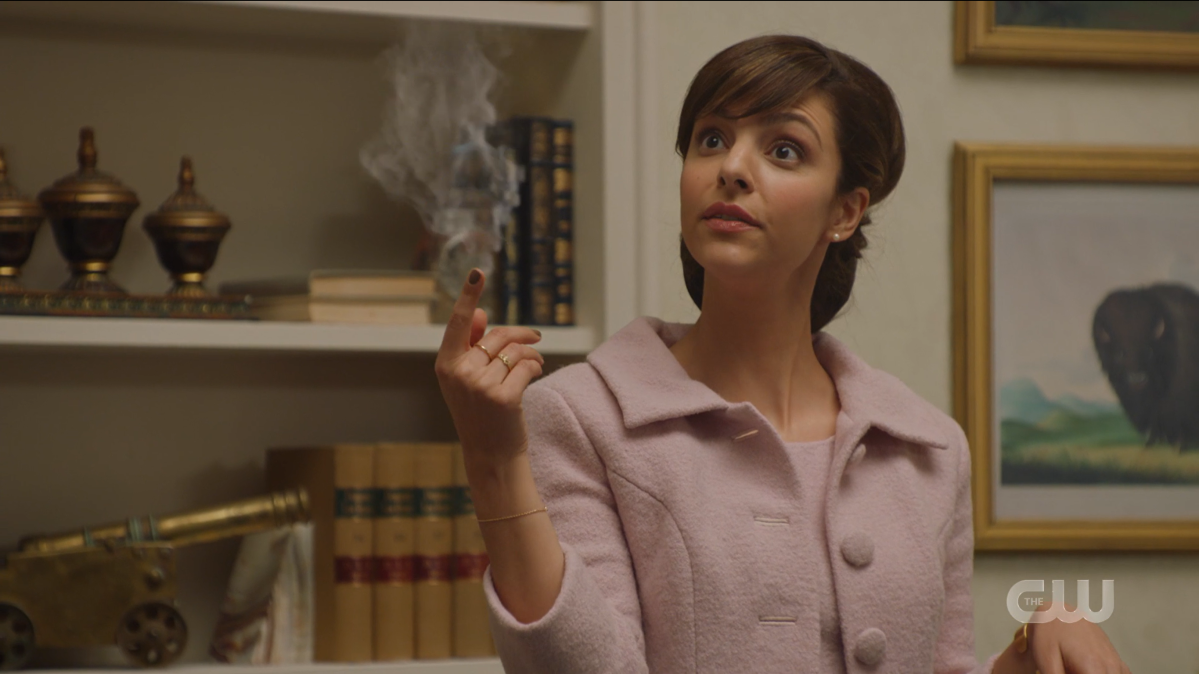 Ultimately, they convince the president not to retaliate and they all brace for impact. But the only person who dies is the military man who ran out and tried to shoot the missile down (I swear guns use brain cells for bullets), because the missile had been disarmed before it launched. Nate joins the President and his men for a bro huddle and Zari is amused by their childlike nonsense. 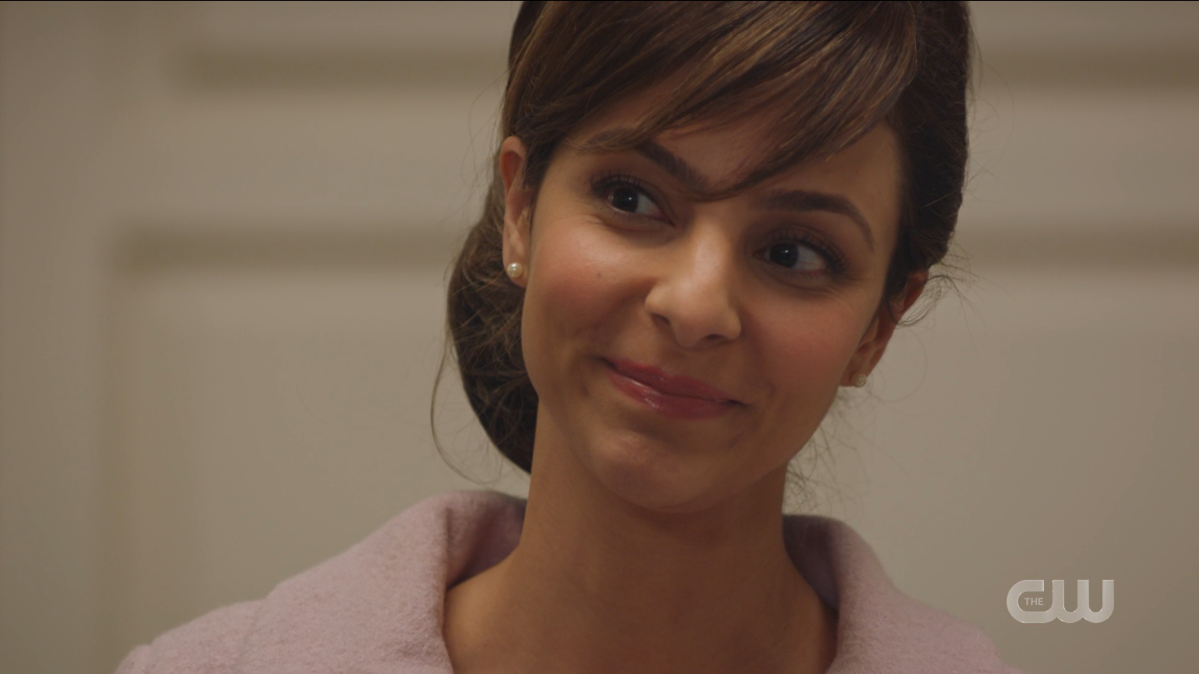 :thinking about the storylines I deserve that are better than being trapped in a room with frat boys and a man as interesting as a hunk of steel:

As it turns out, the reason the missile was disarmed is because Mick and the alien took the plutonium out to power the Waverider for the longer mission to find Sara and the missing spaceship. While they walk, Mick opens a portal and yeets Spooner out.

As the alien gets to work on turbocharging the ship, Mick tells Ava that since they can’t fully trust their new shipmate, he’s going on this particular rescue mission alone. At first it seems like Ava is pissed at him for not following her direct orders. 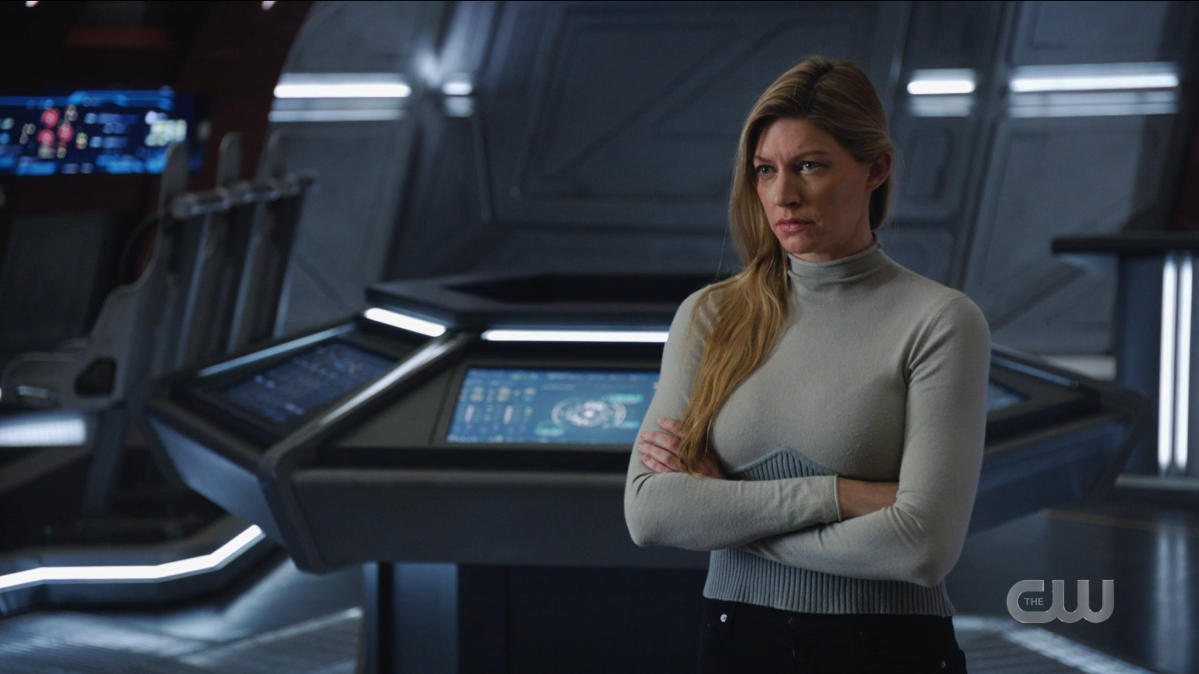 If I walked into the room and saw this I would start confessing immediately starting with the time in kindergarten I only pretended to be asleep when naptime ended so I didn’t have to do show & tell.

But then she admits she was wrong to not trust his instincts, so she hugs him and agrees to let him go alone.

As Zari pulls out her 60s secretary hair, she catches Nate leering at her again, and apologizes for being a reminder of what he lost, but he says that’s not why he’s leering. And I fear another love triangle.

The Legends find their way back to each other in the woods, and they decide while Mick has the Waverider, they’re going to live in Constantine’s house. Though it’s unclear as of right now what year they’re in and which version of a very annoyed Constantine they’re about to be Real World-ing it with.

As they set out on their journey, Mick grumps up to the alien we know to be Kayla and starts barking rules at her, like don’t drink my beer. Kayla starts clicking at him in her alien tongue(s?) and Mick gets angrier. So Kayla puts on her ring that transforms her into her human form and asks if he has any stronger booze. 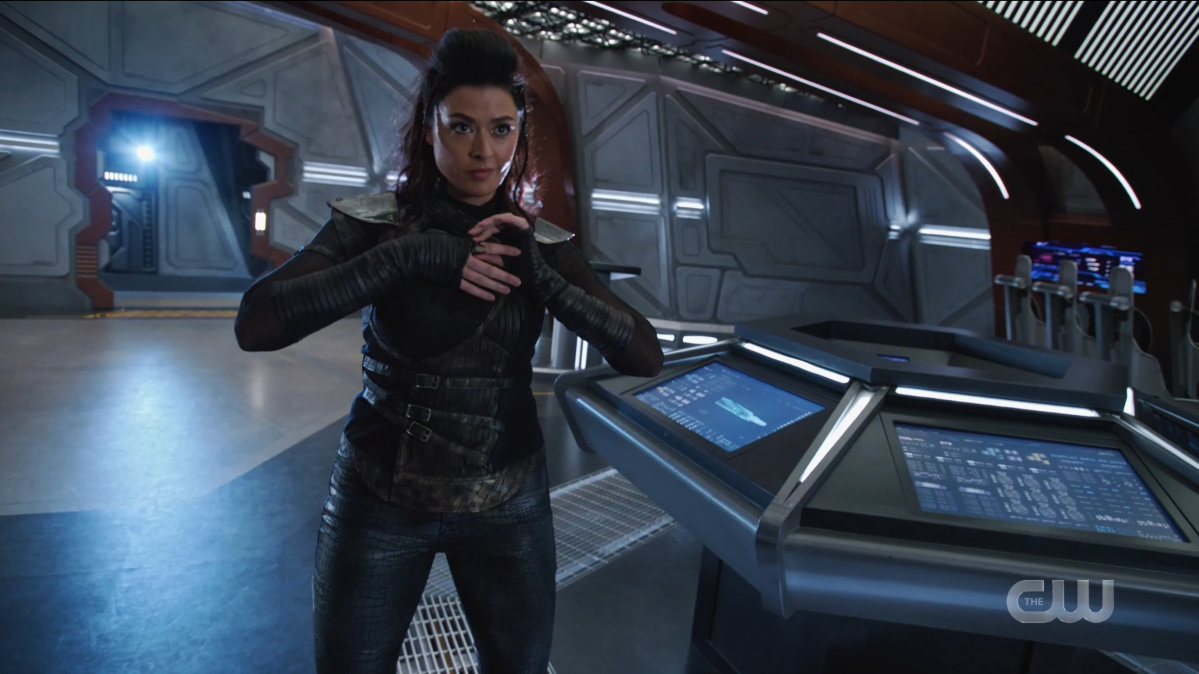 I have been waiting approximately 7 years for Aliyah to appear in another show I recap so I have more excuses to take screenshots of her.

She downs the rest of Mick’s beer and Heat Wave cools down for once.

I, for one, am thrilled that Aliyah O’Brien has joined the shenanigans. I first came to love her in Rookie Blue as lesbian forensic pathologist Holly Stewart, and continue to be delighted every time she reappears on my screen. This is no exception. I will warn you, if Ava and Kayla ever go toe to toe, or even get face to face, I can’t promise my Avalance ship won’t drift a bit. I am but a weak gay. 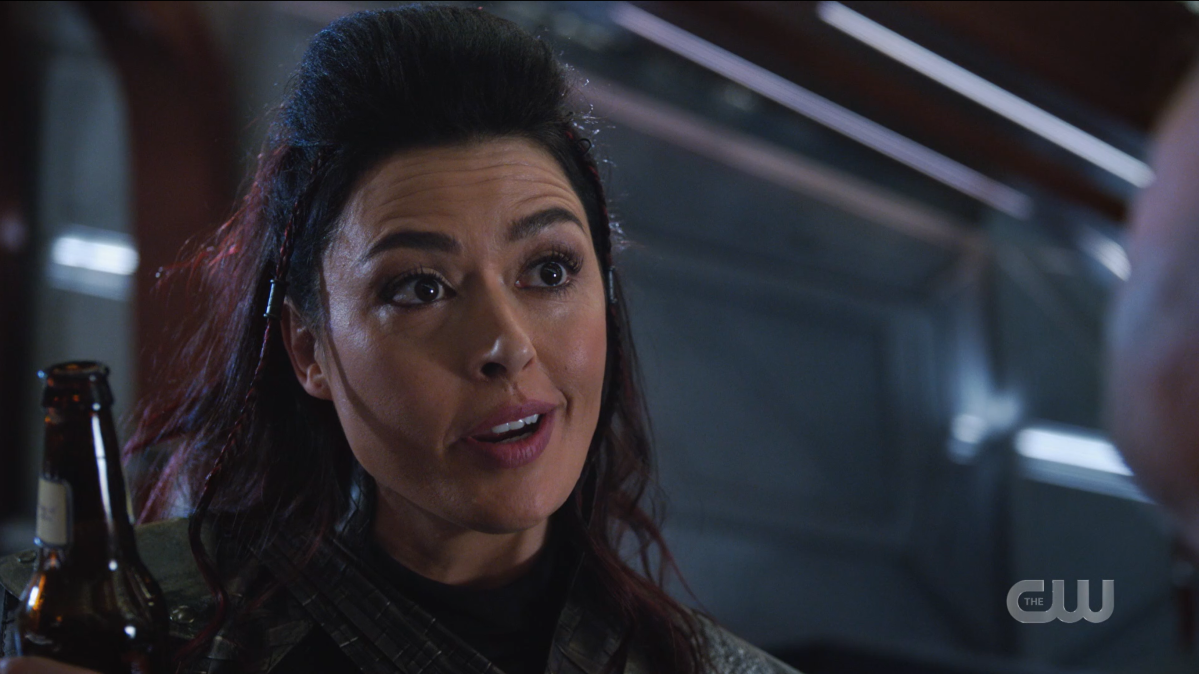 And I mean, all aliens are pan, right? It’s only humans that invented the nonsense concept of binary sexuality?