I SAID WHAT I SAID: All Praise to Niecy Nash playing pool in her underwear and a blazer. You’ll thank me later.

I mean, what are evening reads even for, if not for THIS LEVEL of joy???? Niecy Nash, Jessica Betts, and the Great Queer Love Story of 2021 by Jeffrey Masters for The Advocate

Writers Who Eat: T Kira Mahealani Madden in Conversation with Bix Gabriel. This is a lot of goodness, much like food.

Addressing Rape in Four Minutes or Less: Dating App Reps Left Unprepared to Respond to Assault Victims. “At OkCupid and other dating apps, moderators are expected to resolve customer claims of sexual assault in minutes — and with no special training.” (A wild ride of a read, let me tell you that!)

We Have A Lot Of Questions About What Martha Stewart Was Like As A Babysitter. And now I share those questions!

Why Is Size 26 The Cut-Off Point For Plus-Size Fashion?

The Aughts Seem Both Cooler and Sadder in Retrospect

Political Snacks: Today is the One-Year Anniversary of the Murder of George Floyd. 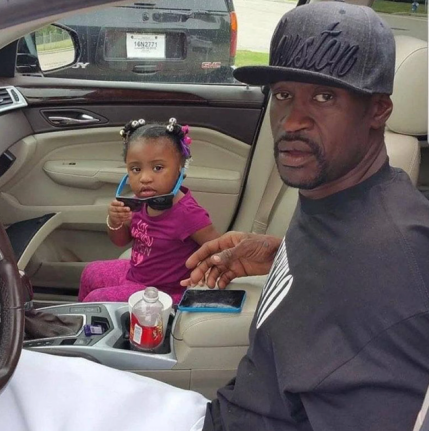 If you have any prayers or warmth or energy to offer up into the world tonight, offer them to Gianna Floyd.

“An image of George Floyd and his daughter Gianna has been circulating around social media since yesterday. George is sitting in the driver’s seat of a car, wearing a black T-shirt and black baseball cap with the word houston emblazoned in cursive letters above the brim.

In the passenger seat is Gianna, who is now 7 years old, but in the photo—taken a few years ago—looks as if she isn’t more than 3 or 4. She is wearing a purple-and-pink shirt and matching pants and a small plastic bracelet on her right wrist, and has several silver and pink bobbles tied into her hair. Her right hand is holding a pair of plastic blue-and-black sunglasses—the sort made for children with the expectation that they will not last very long—and she looks as if she has pulled the large glasses down from her face and to her chin specifically for the picture.

I find the photo compelling for a couple of reasons. George and his daughter share a striking resemblance. The image has captured them in a moment of uncanny synchrony—bodies facing forward, heads turned toward the camera to their left, each of their mouths slightly ajar. The photo also draws you in to both pairs of eyes. Eyes that are still, direct, calm, and so clearly built from the same blocks of DNA.

The photo is striking, too, because Gianna here reminds me so much of my own daughter.”

George Floyd Was Also a Father (and ‘Say His Name’: Gianna Floyd Speaks on Anniversary of Dad’s Death)

‘The Trauma Keeps Coming’: How Black Girls Grapple with Witnessing Police Violence. “Experts have noticed an increase in the severity of mental health conditions among Black girls who witness police violence — like the one who witnessed George Floyd’s murder.” (My love to you Darnella Frazier, I think of you and your bravery all of the time and I wish nothing for you but that this world softens enough to give you peace).

It’s been a year since then 17-year-old Darnella Frazier recorded the murder of George Floyd. She has not done media interviews or made public statements outside of her trial testimony. Today she released her first full public comments. Worth a read: pic.twitter.com/P9xKdo1IoL

Why Last Year’s Protests Are Thought to Be the Largest Movement in U.S. History. With an interactive map.

And One Last Thing…

Ok. I have been obsessed with the Linda Lindas and nostalgia they give my riot grrrrrl loving heart all week, from the minute I found out they wrote a song calling out a white classmate for being a racist and misogynist (relatable) but then! This! The Linda Lindas Sign With Epitaph Records