Being cerebral and someone who “over thinks” (which if you are, you don’t quite grasp how MOAR THINKING could ever be a bad thing), you’re aware of your flaws and you either fix them or decide that they’re a deserving piece in the wacky jigsaw of a person you’ve come to be. That’s all well and good until you’re in a relationship and this carefully crafted person you are is face to face with someone who believes in your greatness but is sometimes upset by how it plays out. So what do you do when someone doesn’t like this masterpiece you’ve created? I mean, you know you’re not perfect but it took a long time to get that way and you’re happy with the current version.

You, this impeccable human being that embraces their flaws and flaunts their strengths, have to come to terms with the fact that you might have to change the way you operate in some cases. That can be a hard pill to swallow (you don’t even like pills). Because if you think you’re great, and they think they’re great, but you have problems, maybe you two aren’t supposed to be great with each other. Didn’t you build yourselves up so you wouldn’t have to change? Relationships include relinquishing some amount of say in your happiness to another. And who are we kidding. You’re a control freak and that freaks your shit out. 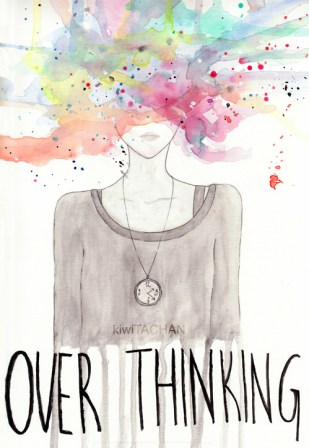 Here is this other person with a whole background, life, and years of experiences completely separate of yours. No matter how much time you spend with her, you can never know her whole story and she can never know yours. You just hope that she can apply what she does know to guess at how your lived experience informs your everyday. Most of the time you bumble around unaware of the individuality of everyone around you but when you finally feel like you connect with someone and are experiencing a sense of oneness, you have moments of, “Whoa. You are a completely different person.” It’s crazy. You’re crazy. To expect someone other than yourself to “get” you is a few inches short of sane. And as someone who feels constantly misunderstood, this is your ultimate life goal — to find someone who can make sense of you when it’s been such a journey to make sense of yourself.

You always think you need things figured out before you jump into shit. Unfortunately, relationships do not escape this fate. If anything, it’s more apparent there than with any other aspect of your life. What you’re currently finding is when two people that think they know themselves SO WELL are in a relationship, they think they can predict the problems they will have in the future. Instead of waiting until those problems actually arise and deal with them as they come, they try to nip it in the bud before it happens. Or worse, they contemplate succumbing to these yet-to-have transpired problems. They talk about the relationship in this cerebral, philosophical way. Every relationship is like infinity; the possibilities are limitless… but also, no one really knows what the fuck they’re talking about because no one’s been there before. +

And so here you two are. The over thinkers. Positive that given your command of knowledge of yourselves, you can predict what things will cause you problems. There’s no way you can but you pretend anyway so when it happens, it won’t feel like failure in the same way it would if you’d given yourself up to the possibility that maybe it doesn’t have to fail. You want to have a rational cushion to pad your fall. So you rely on, “Oh, I knew this would happen because I’m a genius and no one can get anything past me!” But the only thing that could be getting past you is your relationship.  You have to know. You have to be prepared. And you’ve been prioritizing being right over being happy. 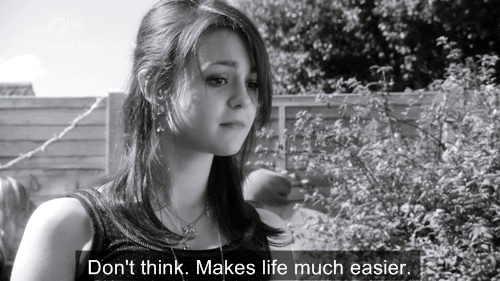 People think that early in the relationship, you shouldn’t be thinking about these things. You shouldn’t be imagining years down the line and you don’t get that. That seems like poor fucking planning. You don’t know how to stop being that person. To be someone that just lives and enjoys and doesn’t worry about it. But yeah. That’s kind of what you have to do. In every other instance, this is the person you want to relax with. This is the person that somehow finds the magic button that turns your brain off, even if just for a second. So maybe you should chill the fuck out. You kind of owe it to them. And to yourself.