Happy July! I hope none of you turned straight when Pride ended today! If you did, don’t worry, Riese has released the monthly Autostraddle viewing guide and there’s plenty of LGBTQ stuff in there that’ll set you right.

+ Nina and Dre appear briefly on this week’s episode of The Chi but it’s long enough to reiterate that there’s still tension between the two after Nina’s affair. They toss unnecessary barbs at each other, even as their friends sit by uncomfortably. Thankfully, they are in counseling so hopefully they’ll be able to salvage their relationship. Meanwhile, Imani’s been replaced? In order to boost Trig’s potential candidacy for city council (what?!), Tracy and Douda recruit Tierra (formerly Kelsey on Dear White People) to play his new girlfriend. — Natalie

+ FYI: the first four episodes of Loot, the new show starring Maya Rudolph and Michaela Jae Rodriguez, are now available on Apple TV+. Highly recommended from both me and Heather. — Natalie

+ Ellen was in more of this week’s episode of For All Mankind but just doing President-y stuff; still no mention of her queerness. I’m hoping that since she’s visiting NASA maybe she’ll run into a certain old flame but also maybe the show forgot. — Valerie Anne

Mercedes Woodbine is the Pynk. She might not own it but she owns it. But Mercedes has always had her eyes on what’s next: opening her own gym — home to her dance team, the Chucalissa Challengers — and winning back custody of her daughter, so she’s always stacked her paper. Just when she’s on the precipice of getting everything she’s always wanted, the rug is snatched out from under her…by her mama, no less…and Mercedes is forced to return to the Pynk. Determined not to stay there long, Mercedes does what she’s always resisted doing: taking her longtime customer, Cedric “Coach” Haynes, up on his offer to “sponsor” her. But, “a bitch got her some integrity,” so before Mercedes agrees to sleep with Coach for money, she asks for a meeting with his wife first to get her approval. 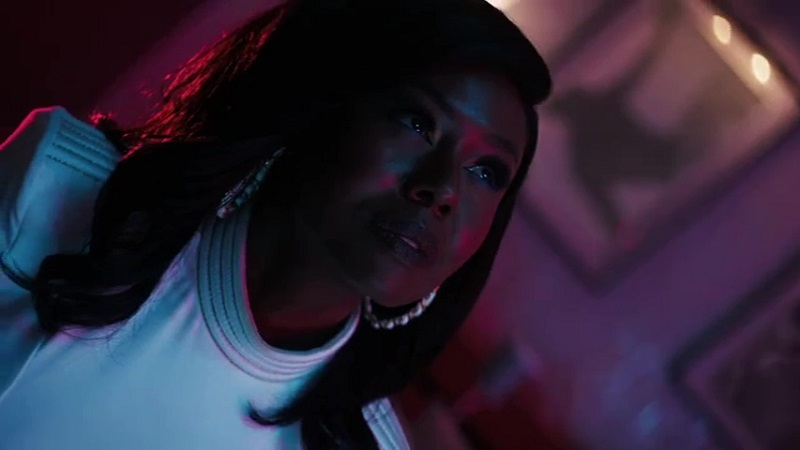 The trio — Mercedes, Coach and his wife, Farrah — meet at the couple’s riverside condo in Memphis and formalize their agreement (with a contract and NDAs). Farrah’s snooty and rude to start but quickly warms to Mercedes’ charm. As she goes to make her exit, Coach invites Farrah to stay and enjoy the “Mercedes Experience.” And boy does she: Farrah takes in Mercedes’ entire performance — on the condo’s newly installed chrome pole, to Teyana Taylor and Kehlani’s “Morning” — with her mouth agape (#relatable). She’s so taken by the whole experience that when Mercedes turns her attention to Coach, Farrah interjects: stripping off her clothes and turning their one-on-one into a threesome.

Unfortunately, the party gets interrupted but a few days later, Coach invites Mercedes back to Memphis to pick up where they left off. But when she arrives at the condo, it’s Farrah who’s there, collecting her photography gear. Mercedes apologizes for the abrupt end to their party the other night but Farrah assures her it was fine. Farrah insists she’s never done that before — “it sho’ll came easy to ya,” Mercedes notes — but I’m skeptical. A call from Coach interrupts their conversation and while Farrah helps him locate his socks, Mercedes retreats to the pole and practices her moves. Again, Farrah is mesmerized. Unable to resist, Farrah snaps a picture of Mercedes, spinning upside down on the pole. Mercedes reminds her of the no photography clause in her NDA and Farrah is basically like, “if you don’t tell, I won’t tell”…and it’s clear that’s going to be the theme of this evening. 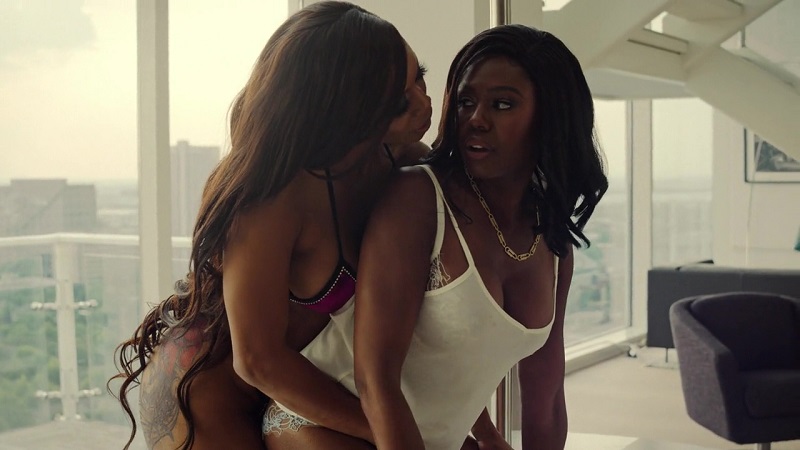 Once Mercedes is done with her routine, Farrah laments that she can’t do what Mercedes does so, of course, Mercedes volunteers to teach her. She invites Farrah to take her clothes off in quite possibly the least sexy way I’ve ever heard on television. Farrah resists so Mercedes leans down and pulls off Farrah’s shorts for her. She explains that to climb to the top, the pole needs her skin. Predictably, Farrah tries but falls almost immediately and breaks out into a fit of riotous laughter. It’s the most at ease she’s been since we met her. She tries and fails at twerking so Mercedes slides in behind her to teach her how. She reaches around to the inside of Farrah’s left thigh and presses down on the “twerk muscle” which elicits an immediate reaction — of all sorts — from Farrah. Ever seen someone seduce someone else unwittingly? That’s Mercedes in this scene.

Overwhelmed by her feelings, Farrah admits that she likes Mercedes despite herself. Mercedes tries to comfort her but that just makes Farrah feel worse so she lashes out, dismissing Mercedes as just a stripper. She tries to take back her insult but Mercedes reminds her that she’s the one that’s naked now. She dismisses Farrah and turns to prepare for Coach’s arrival. But Coach isn’t coming, he never was.

“I’m the one who texted you,” Farrah admits. “I’m sorry for misleading you. I just…never met a woman who could hold her own weight, like you.”

Farrah draws closer and, finally, it feels like Mercedes knows what’s about to happen and she fully gives in. They kiss and things escalate quickly from there…and listen, nothing about the way Farrah dives between Mercedes’ legs says “this is my first time.”* Later that night, Mercedes wakes up in bed alone, with a text message from Farrah (“That was wonderful. Can’t wait to see you again.”) and $10k on the nightstand. The money is a cold reminder of what her relationship with Farrah is and what Mercedes has committed to doing.

“Demethrius” also included a sex scene between two male characters — Big Teak and Lil’ Murda — and social media was overrun with homophobia (predictably, none of it was directed at the Farrah/Mercedes scenes). The episode’s writer, the legendary Patrik-Ian Polk, encouraged the haters to go watch something else, “cuz the gay ain’t goin’ nowhere.” Happy Pride! 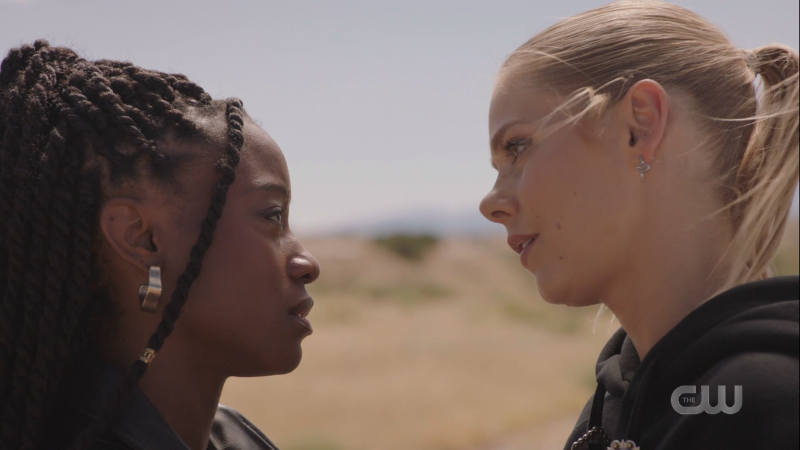 I guess I’m glad they broke up BEOFRE the reporter found out about the aliens?

This week they brought Sherri Saum back just to kill her, which made me sad on many levels, but it was sweet to see everyone gather around Maria to support her, and to hear Isobel call her “sister” again.

Isobel goes out to get everyone coffee, and runs into Anatsa at the coffee shop. Anatsa heard the news about Maria’s mom and hugs Isobel, and Isobel is so moved that she tells her she’s ready to tell Anatsa something she’s wanted to tell her for a while. Anatsa has been able to sense she was holding back, and is ready to hear it.

But then Anatsa says that she wants to talk about the job offer she got in Albuquerque, and Isobel panics and tells her that she should take it. She rushes off before her face can betray her real feelings on the matter, and Anatsa watches her go, looking sad she didn’t ask her to stay.

Isobel’s next stop on her pity party parade is Cameron, and I adore this duo. They are the two that are given the best lines and their level of snark is unmatched, and their comedic timing playing off each other gave me life. Like when Cameron realized Isobel is in love and Isobel immediately reacted, “It’s HORRIBLE, Cameron!” Cameron tells Isobel she’s probably panicking because it’s the person she’s truly cared about since her evil ex, and Isobel realizes she has to save this relationship.

So Isobel runs to stop Anatsa, right in the middle of the road. She breathlessly apologizes for pushing her away, admits she was afraid, and says she’s finally ready to let Anatsa in and tell her everything, she just needs to take her to a nearby cave. She literally asks her to ride off into the sunset with her…

Anatsa says for her, love can’t be this complicated. So she’s taking the job in Albuquerque. She wishes Isobel well and says, “You deserve to be happy,” at which point I yelled at my TV, “DO I NOT DESERVE TO BE HAPPY?!”

Maybe there’s a world where Isobel gets with Cameron instead of Kyle but alas I think I know where this road is headed.