One of my favorite photos from my childhood is a photo of my dad holding me next to a life size Woody on a trip to Disney World. Toy Story was my all-time favorite movie and, from what I can remember, the first film I would ever quote by heart. It’s one of those core memories I locked in at a very young age. Being the same age as the film (27 years old), I grew up with its rising popularity. As I got older, Disney created merchandise, rides, even whole lands devoted to our beloved world of toys. It was clear that other millennials were falling in love with these goofy, lovable, and sometimes egotistical characters just like I was.

From 1995 until now I’ve seen every iteration of Toy Story almost immediately after it was released. While I don’t quite remember Toy Story 2 or 3, I remember hysterically sobbing with my then-girlfriend during the last ten minutes of Toy Story 4, a story that quite clearly acknowledged that the generation who grew up with Buzz and Woody were now in the age of moving away from family, finding partners, and creating new family. Toy Story 4 was one of the first major Pixar films to cameo a queer couple. 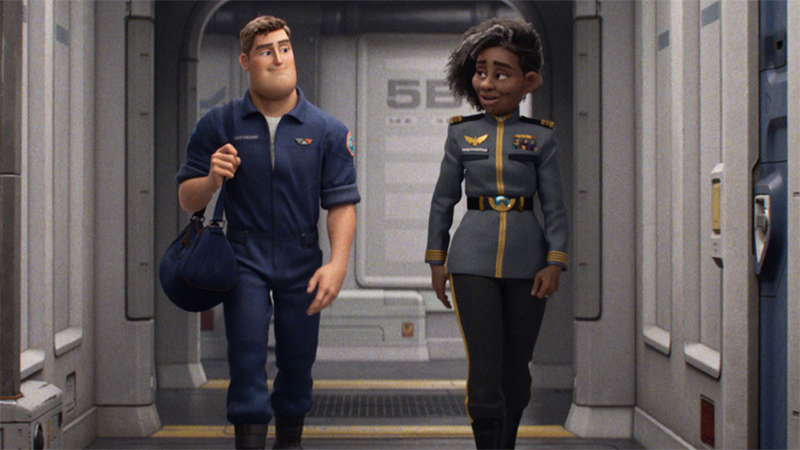 The scene depicts Bonnie, the main (human) character, on her first day of kindergarten. During parent drop-off we see two moms say goodbye to their child and then return later to pick them up. Although the two moments lasted no longer than ten seconds combined, you can imagine every Karen was outraged. The One Million Moms protest made headlining news, causing a major disruption in the conversation of how LGBTQ+ friendly Disney/Pixar really is. Recalling the trauma that came with that 2019 Toy Story release, I was ecstatically surprised to see a queer couple star as the integral plot line of Pixar’s newest film about the backstory of Buzz Lightyear.

Lightyear opens with a screen that simply reads: “In 1995, a boy named Andy got a toy from his favorite movie. This is that movie.” This means that Lightyear is the movie Andy would’ve watched, presumably around 1995, Toy Story’s premiere. With this context, we’re introduced to Buzz and his space ranger partner, Alisha Hawthorne (Uzo Aduba). They’ve been on numerous missions together and, when Buzz ultimately gets their spaceship stuck on a deserted planet, Alisha helps him build an entire city from the ground up. At first, Buzz and Alisha’s sole mission is to get Buzz’s ship to reach hyper speed and get everyone home. During his first trial, Buzz fails to reach hyper speed, but returns home in about four minutes, or so he thinks. When he lands back on his planet, he finds Alisha four years older than she was when he took off, only to learn that four minutes in space travel equates to four years on the ground, a phenomenon called time dilation. 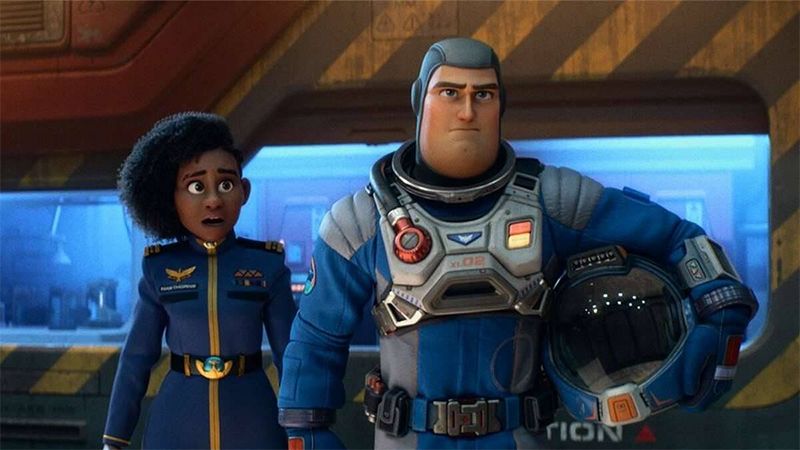 So what does this have to do with being gay? A lot, actually. As Buzz fails test run after test run, he comes back to find Alisha aged four years older every time. When Buzz returns from each four-minute mission, he finds Alisha engaged to a woman, married, growing a family, becoming a grandparent, and eventually in her last years of life, all while Buzz remains the same age. After Buzz returns to find Alisha passed away, he looks back on the happy, fulfilling life she cultivated for herself and realizes he was focusing on the wrong mission the entire time. Unlike Toy Story 4, Alisha’s queerness isn’t just some sidelined reference. The whole plot of Lightyear revolves around Buzz comparing his life to that of his queer, Black best friend and realizing that family and community is what he truly desires! As Buzz eventually meets Alisha’s granddaughter, Izzy (Keke Palmer) and partners with her in saving the planet, Alisha Hawthorne’s legacy remains a hero and inspiration to Buzz and his ragtag team of junior space rangers trying to save the planet from Evil Emperor Zurg.

In our Autostraddle Slack conversation about Lightyear, Heather brought in a comment from Vita, one of our readers, that, I feel, perfectly articulates why Alisha’s storyline is groundbreaking:

“It’s not a small or throwaway part of the movie. The climax hinges on Buzz deciding Alisha meeting her wife is more important than his primary objective for the entire movie, the lost years of his life, any possible better alternative path. He sacrifices everything for their love story and for the multi-generational positive impact of their love story. I was gobsmacked at how hard it swings not just for gay people being tolerable in “family-friendly” settings, but for gay people creating amazing families themselves.” 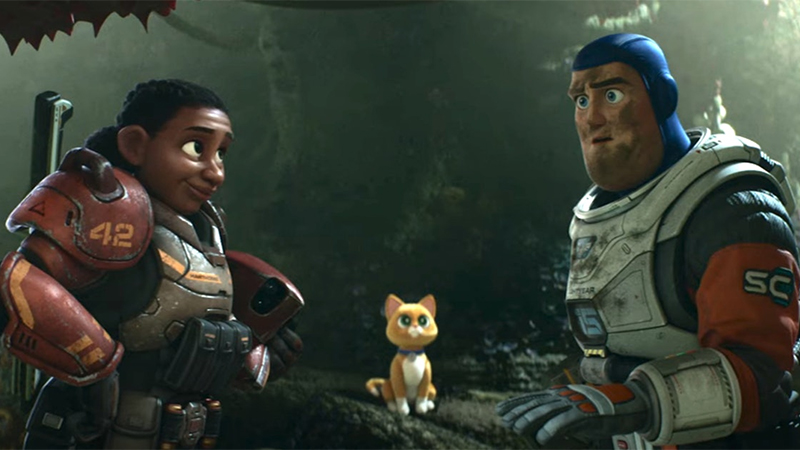 We are given not one, but two queer POC folks who are MARRIED and have happy FAMILY who then go on to have their own happy family, which, as the commentor mentions is MULTIGENERATIONAL QUEERNESS! Pixar made the deliberate choice to use a queer family as the model for Buzz to aspire to. What’s more, they made this choice within the context of 1995. Think about it: if this movie came out when Andy was a kid in 1995, that means that every human family in the Toy Story universe would’ve seen and tolerated, if not celebrated, a queer, black woman and her family.

Our very own Katie Reilly shared this excellent point in our Slack as well:

“I loved the fact that they said this was the movie Andy saw in 1995 which means Pixar made some alternate universe where queers were in movies as main characters before Ellen even came out” (1997).

This means Lightyear’s story of queer family excellence came before the American Counseling Association declared that “homosexuality is not a mental disorder” (1999), before The US Supreme Court overturned “sodomy laws” (2003), before “Massachusetts [became] the first U.S. state to legally recognize same-sex marriage” (2004), or before the US military “Don’t Ask, Don’t Tell” rule ended (2003). Alisha and her wife aren’t just characters in a made-up universe, they’re family role models in pre-marriage equality America. While piecing together this fictional universe may seem superfluous to some, it means the world to the six-year-old queer Emily who wants to see her kind of love in the characters she looks up to. Moreover, Pixar is encouraging us to dream about a reality in which we could’ve received an Alisha action figure for our birthdays. A reality where my favorite photo could be an image of my dad and me standing next to Alisha and her wife in a character meet and greet.

It’s so refreshing to feel energized by queer representation in mainstream animation, particularly Disney and Pixar. Instead of writing a critique or piece about only seeing a few seconds of one couple in passing, I’m able to write about an entire universe of people loving and looking up to people like me. Sure, we’re still waiting on a mainstream family-friendly Disney film with queer heroes, but honestly I think this is a really exceptional start and makes me excited to see what Pixar does next.

Originally from Toledo, Ohio, Em now lives in Los Angeles where she does many odd jobs in addition to writing. When she's not sending 7-minute voice messages to friends and family, she enjoys swimming, yoga, candle-making, tarot, drag, and talking about the Enneagram.

Em has written 16 articles for us.