I often see TV critics say there’s no good way to describe Prime Video’s animated hypebeast spoof, Fairfax, but I think that’s stilly. Fairfax is like if 30 Rock had a baby with Daria that was raised inside the world of BoJack Horseman. By which I mean: Fairfax is heavy satire with mile-a-minute deep-dive entertainment insider jokes and visual gags, with a misanthropic teenage lesbian main character who’s live-laugh-loving / brand building in Los Angeles. The series, which dropped its second season last week, focuses on four middle school friends who are just trying to survive their youths while also figuring out their place in The Culture. Kiersey Clemons’ Derica, a queer activist and aspiring model, is, by far, my favorite character on the show. And after facing her first big crush rejection, she’s reshaping herself in season two.

Obviously that starts with a trip to a thrift store to buy a white leather jacket with fringe that she swears to never take off. She’s reinvented!

Season two is also full of zingy pop culture commentary, the kind that makes you actually glad you spent too much time on Twitter because otherwise you’d have no idea what anyone was talking about. Of course that also means some of the jokes — “we’ve already had a baby that’s actually a cake” — are already dated, even though they happened like three weeks ago. That’s just how fast Twitter moves. But some of Fairfax’s main targets are timeless. Derica does a “Girlbossier” photoshoot with all POC models, but when the camera flips around the entire production team is white as ghosts. So much for theor Div-HER-sity initiative! There’s a spa called Clout Nine that specializes in “clout fatigue and cringiness.” There’s phantom phone swiping rehab. And even a Romeo and Juliet-inspired anime episode that’s aiming straight at fascism.

One of the ironies of Fairfax is that it’s made for the TikTok generation, but there’s no way you can scroll on your phone while watching this show or you’ll miss everything. It’s dense with the kind of humor that forces you to pay attention. 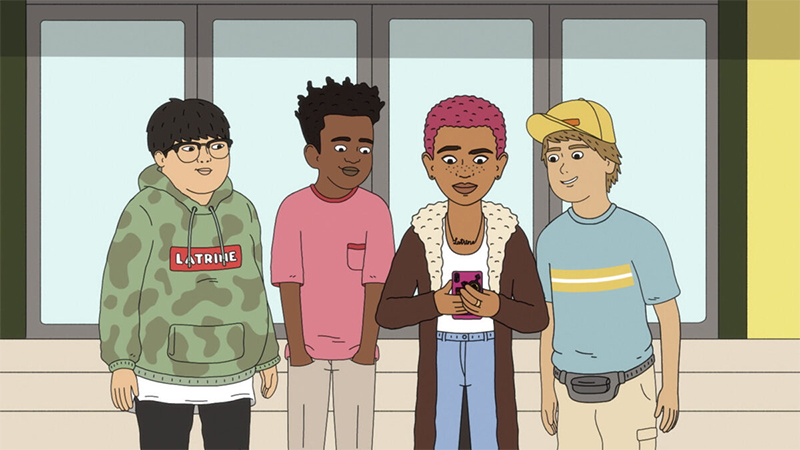 It also has a lot of heart, actually. Three decades may separate it and MTV’s 90s hit Daria, but the sentiment is the same (when the kids crack and let sentiment in). Growing up is hard, no matter what generation you are, and as much as everyone’s chasing popularity and that perfect pair of sneakers, they’re also trying to figure out where they belong, who they are, and what it really means to connect with other human beings in a burning world.

Even if you don’t relate to the teens of Fairfax, you can’t help but root for them.

Both seasons of Fairfax are now streaming on Prime Video.