I struggle a lot with my concept of masculinity, or at least with talking about it. In terms of enacting it, I approach my masculinity the same way I approach most other things: I do what I would like to do, and I do not do what I would not like to do. But it’s when I try to describe those things that I begin to sound like J. Alfred Prufrock. “That is not what I meant at all.” Because in trying to process what masculinity is made out of, I run up against the rigidity of it and my language falters. Sometimes in describing how I knew I was trans, I wind up accidentally narrowing the concepts of what a woman can be — and it’s simply not what I mean to do. Well, I never buy a stitch of clothing that isn’t from the men’s department…okay, some women don’t either. I bind. So do some women. I want top surgery; yes, sometimes people who use she/her pronouns also want that. My wife, a cis woman, grows frustrated in my ham-handed attempts to narrativize my experience because in describing how it is to me, am I bringing the already too-close walls around her gender even closer?

There are too few examples of masculinity. Or rather plenty of examples of exactly the same masculinity and not enough space to breathe in between them. I’m not going to call it alternative masculinity, because I think that’s bullshit, to label some masculinity as alternative and some as, what, normative? I think that’s part of why we’re in this masculinity predicament in the first place — that we talk about it as a binary of toxic and good, normative and strange. In or out of the box that we label. And yet — how do we talk about our experiences without making them rely on something that it’s not? For example: I know I am masculine because I don’t like x or I know I am trans because doing y makes me feel dysphoric. Why can’t masculinity just stand on its own, independent of any sort of negative space around it or theoretical opposite? It’s such a hairy thing to parse. And I’m not going to parse it in this essay, either.

I am simply going to advocate for more examples.

Enter Dream Daddy as an entity. A computer game, developed by Game Grumps (originally a YouTube series, now additionally maker of this damn delight). The idea behind the game is to create your own dadsona (and your dad can even be a trans dad!) and date all the other hot dads in the neighborhood. I poked Al Monts until they played it for an Autostraddle review back in 2017, and they let us know when the comics were coming out earlier this year, but somehow I missed them until I showed up at New York Comic Con this month and Oni Press loaded me up with a tote bag full of gay books.

The game was pretty revolutionary in its depictions of masculinity; it let players try on a lot of different flavors of masculinity, and let them interact with other masculine folks in gentle and interesting ways. In the world of Dream Daddy, masculinity is both competitive and nurturing, physically fit and bear-tastic, trans and cis, and all of it is very, very gay. While the game introduced us to the world and allowed a player to try a plurality of masculinities on for size, the comics take this experience a step further away from the body of the reader, and does something a little bit different that I very much need right now as I quietly (but intensely) internally address what it means to be a trans masculine person. Spoilers for the game and comics ahead!

Rather than putting the reader in the shoes of Manda Panda’s dad, the first issue, Much Abird About Nothing, opens by introducing us to “our dad” or the character we would normally be playing, if it were the game. We actually never learn our protagonist’s name, at least not in issue one, but to be honest, he may not even really be our protagonist. There might not truly be one; this is an ensemble project, and that’s the first thing the comics do differently. Rather than emphasizing the relationship between two characters, the comics explore the dads as a community. They interact in even more varied ways with each other than in a game marketed as a dating sim. Less rom com, more How I Met Your Father. Our Dad is going with Craig, a physically fit gym bro with three daughters, to a college reunion. I say “physically fit gym bro” as though Craig can be reduced to such a narrow definition, but the things the comic allows him to do expand the way his gender arrives on his body: our dad goes to get water from Craig’s fridge, and discovers a be-lemoned pitcher of it on a shelf. “I can’t believe Kegstand Craig puts lemons in his water now,” he says. And in the next frame, he stares at his glass in awe. “Wow. The ratio of citrus to water is perfect. This is so refreshing!” So many things are present in these two frames, things I don’t often experience when reading about masculinity in any sort of fictional context. First, Kegstand Craig has been allowed to evolve, and there isn’t a moral judgment about how he has evolved. He hasn’t gotten better or worse; he has simply gotten older and changed. And that is an okay thing to have happened. Second, he keeps a house and takes care in details that make his life more comfortable — the lemons in the water. Later, Craig confides in Our Dad how nervous he is about the reunion, that some things about the reunion might cause him social stress. He communicates these fears really cogently and calmly and allows himself to feel the feelings without passing judgment on them. He is then reassured by another Dad, Our Dad, that the reunion will be fine and fun. And Our Dad will be with him every step of the way. Plus there is some very sexy kissing. We get to watch Craig and Our Dad do everything from adventure at the pier to interact with Craig’s mom. 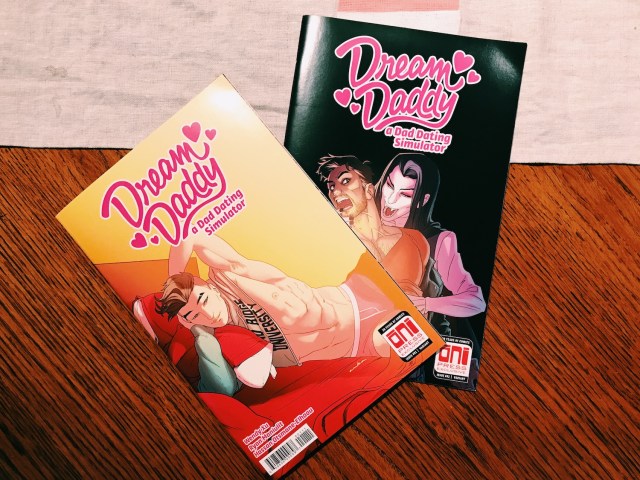 The first two Dream Daddy Comics, as they look laid out in an attractive manner on my dining room table

In the second issue, entitled Let the Right Dad In, we follow Robert (dad to a pupper, not a human child) and Damien, canonically trans goth (vampire?) dad and explore their relationship with each other as Damien first moves into the neighborhood. Robert thinks of himself as a classic movie hero; Damien thinks of himself as a vampire, basically, or at least an enthusiast of Victorian Jelly, as evidenced by the scene in which Damien and Robert interact at a neighborhood cookout. “Looks like you’ve got a thing for the macabre,” says Robert. “I prefer to see it as a comfortable relationship with death’s inevitability.” Robert sees himself as a badass, but runs during his first encounter with Damien; Damien allows his earnest love of his aesthetic to flourish (“For my aesthetic sense to convince you of the supernatural can only be described as a testament to the years of hard work I’ve spent refining my personal style and sense of self.”) while also, again earnestly, volunteering at an animal shelter for the love of cute puppers.

In short, not only do we have a pantheon of masculinities in the characters as individual archetypes, each dad transcends his archetype and experiences a multitude of masculinities within himself. I find both of these things underrepresented and also comforting, an affirmation that I am not doomed to something so narrow. Furthermore, each sort of masculinity we see never relies on a diametric opposite, which is often the flaw of masculinity portrayals. They simply are, and it makes me breathe easier.

The other thing the comic does that the game doesn’t do is encourage a quietness, a low-stakes-ness for which gaming as a medium doesn’t often allow. In a game, there are usually high enough stakes to make a player feel like something has been attained. The Dream Daddy game has both a choose-your-own-adventure conversational system that the genre of “dating sim” relies on, and also dad-ly mini-games that often require dexterity. For whatever reason, I am very good at the Brian mini-games (yes, even the mini golf that everyone else I know complains about), but very bad at the Mat ones. I have not had one single good date with Mat, and so he remains someone unexplored.

One cannot, however, rage quit reading comics because no part of the experience of a book relies on physical dexterity or frustrating repetition. There is a sweetness to the medium that I crave; a sensitivity to the art, the act of putting my feet up on the couch and slowly sipping coffee, taking in a story that doesn’t require my involvement (save for actively reading it) to unfold. I am not usually a person to advocate for passivity, and yet that is what I want right now. Something that’s less about trying things on and more about observation. Something gentle and nurturing, where the number one conflict is a bird accidentally stealing someone’s watch. There’s no goal for the reader, nothing they must attain, no action necessary. I can simply rest in this strange and beautiful world of homosexual daddies with expansive definitions of what it means to be masculine; given how raw and terrible I feel as I continue to come out as trans, continue to lift up the rocks within myself and peer under them, this is what I need. I have cried so much about this. Sometimes I just want a comic book where not every attempt to narrativize masculinity looks like a deep pit into which I can tumble.

All this, plus the fifth one of these, slated for a December release, is entitled Dungeons and Daddies and might be a perfect confluence of my interests. You can join me in reading the next three issues (one of which came out last week) by ordering them online directly from Oni Press.