New Yorker’s Family Research Foundation, a conservative, anti-gay marriage organization, launched their “Mayday for Marriage” RV Tour on May 1. How clever! The tour will include an RV they describe as “wrapped in marriage messaging” going from city to city throughout the month to meet with legislators – and average, everyday straight people, too! Doesn’t this sound like the best 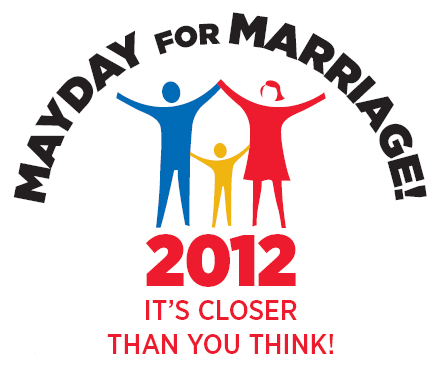 conservatives: they're closer than you think!

Stops on the tour include official offices, marriage rallies, and press conferences. On May 22, New Yorkers are invited to celebrate “Mayday for Marriage Day,” which is not on May Day, and will happen in church. The NYFRF is asking over 5,000 churches on its mailing lists to talk about the importance of the institution of marriage and its protections that day, and to then encourage their churchgoers to be good, giving Christians – and donate to the tour. And finally, the tour will culminate in a rally in Albany outside of the State Capitol.

I can tell NYFRF is freaked out because they said so in their blog post announcing the tour:

“Governor Spitzer desired to advance homosexual marriage, but his tension with the State Legislature made this highly unlikely. Governor Paterson was perceived as a weak governor. Though he was passionate about his desire to sign “gay marriage” legislation, he was more a lover than a fighter and ultimately failed. Governor Cuomo’s approval ratings are very high. The popularity of the new governor, coupled with the fact that he has some political capital to spend, means that the battle for marriage will be fiercely fought in the coming weeks.”

The NYFRF is asking supporters to come on out and support the cause, as well as bring out their checkbooks to fund it. And when that doesn’t work out, they are also asking for lots of prayers to the Big Guy Himself to push their cause further.

But it isn’t just Cuomo that the NYFRF should be freaked out about – it’s their entire state. 58 percent of New Yorkers support changing the lawbooks to include gay partnerships. You’d think this would shut down all of these RVs and all of the prayer circles, but no: when it comes to the state Senate, the majority isn’t so big – so the fight goes on.

The first rally, on Saturday, happened in downtown Elmira and featured five Reverends from various institutions across the state. Reverend Jason McGuire spoke to attendees about the importance of having a mother and father for every child, and then likened gay marriage and, therefore, gay families, to the Supreme Court’s decision in Roe v. Wade. I wish I could make this stuff up.

Elmira City Mayor John Tonello has publicly declared his disagreements with NYFRF’s tour. “I’m hopeful it passes the state Legislature this year,” he said, “and gay marriage is approved.” Oh my gosh, us, too!

Here’s some footage of the inaugural rally:

The only obvious way to shut down a Mayday for Marriage tour is to take action at the site of one. So if you like in New York, put on your lace-up boots and head on out to a rally with a real message about love and acceptance. You can get tour dates and updates on their website or on Facebook. The HRC is encouraging you to contact your state senator to voice your support of same-sex marriage, using this petition.