Last week, during an interview for an upcoming L Word-themed episode of the Nancy podcast, I was explaining to host Kathy Tu why Season Four was the worst season when she interjected — “what about Season Six?”

“Oh, right,” I replied. “I like to pretend that Season Six never happened.” 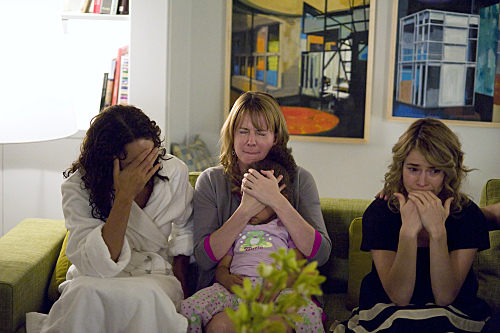 How I feel about Season Six

See — in addition to being a very short season (only eight episodes), Season Six was dogged and destroyed by its commitment to a quarter-baked murder mystery plot surrounding my dear beloved Jenny Schecter. (Yes, I’m aware that loving Jenny makes me the member of a very small group of passionate and controversial L Word fans.) It didn’t make sense, it didn’t feel like an organic extension of the relationships and stories and tone the previous five seasons had set, and it made Jennifer Beals cry in her trailer every day. Episode 608 is, hands-down, one of the worst hours of television I’ve ever witnessed.

So you can imagine my delight when I read that Ilene Chaiken, speaking about The L Word reboot at the Television Critics Association press tour, said they’re strongly considering proceeding… as if Season Six never happened! Specifically, Chaiken reported that they “may forget” that the controversial final season of the show “ever happened.” This is especially wise considering that the last time Chaiken tried to build an L Word spinoff as a continuation of Season Six’s plot, “The Farm,” it sucked and therefore didn’t get picked up.

Chaiken also told the TCA audience that they were “very close” to finding a new showrunner, and that the new showrunner would be LGBTQ and also “one of the kids, somebody who knows what’s going on in that world.”

While Chaiken will only be an executive producer on the reboot, she did feel confident that the new series would have a more “enlightened” attitude towards transgender issues than the original series, which faced criticism for mishandling Max’s (Daniela Sea) transition and promoting stereotypes of trans men as aggressive and confused. “We’ve all learned a lot since then,” she said. “I think the new version of the show would reflect that.”