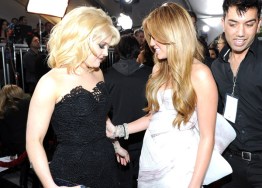 But luckily other people watched it, like the smartie cleverpants ivyboys of my second-favorite website, The Awl. These are my favorite parts of The Awl’s Liveblog:

8:02 p.m. Now, Rihanna is traveling through a kudzu field of glowsticks while wearing a bikini top that looks like it was crafted from dip-dyed dish towels while performing her version of Beyoncé’s interpretation of Axl Rose’s snake dance.

8:20 p.m. Stomp meets Jersey Shore meets my living room being about 95% brighter than it was before this performance started.

8:23 p.m. Oh, no, my bad, next up is Miley Cyrus’ homage to Alanis Morrissette Unplugged.

8:33 p.m. There is also the matter of the callback to Bobby Brown’s outfit from the “My Prerogative” video.

8:49 p.m. I like how Fergie is embracing the Peas’ “cover every demographic base” aesthetic with an outfit that incorporates Gaga’s cage, Katy’s cleavage, and Ke$ha’s muddy glitter.

9:46 p.m. And now here’s Taylor Swift to be the buzzkill. And continue with the “people descending from the sky” motif.

9:47 p.m. At least Taylor’s set is inspired by the cover of Fall Out Boy’s Inifnity On High.

9:52 p.m. Justin Bieber thanks Michael Jackson: “Without Michael Jackson, none of us would be here.” OK, so his geography misstep is a bit understandable, but come on.

10:56 p.m. I didn’t even like the New Kids when they were a “thing” but that synchronized crotch-grab? Ticket, purchased.

Anyhow we made a gallery.

These are our observations:

I expected to like this but ended up feeling sad for everyone. Receding hairlines. Also, I’m not 8 anymore.

2. The Death of Fashion

Fashion died tonight. No really it did. Pull out your stirrups and turtlenecks ladies, the game is over, and fashion lost. It’s dead on the floor, where Jada Pinkett-Smith, who is, btw, a total lesbian and you don’t have to believe me but trust me one day this will come out in the open and you will be like, oh JUST LIKE AUTOSTRADDLE SAID, anyhow where Jada found it, birthed it, BELTED IT, and then put it on top of an innocent child who she then escorted to an awards show while wearing Xena’s training bra and some crepe paper.