Have you ever wished that you could be led through the thicket that is gender by a baseball-cap rocking self-identified transdrogynous genderqueer named Boston Bostian? Then today is your lucky day, because by simply clicking here, you can read a nearly-done version of The Gender Book. The product of “countless interviews, over 200 surveys, many hours in the library, and a bunch of soul-searching,” The Gender Book is a beautifully illustrated guide to the infinite possibilities of human identification. It’s interactive, patient, funny, and intersectional, and it covers everything from generalizations to pronouns to how to be a good ally. And it’s respectful of identification as a constant and personal journey, providing no ‘answers’ beyond its page-nine declaration that “Gender is, simply, how you see yourself.” 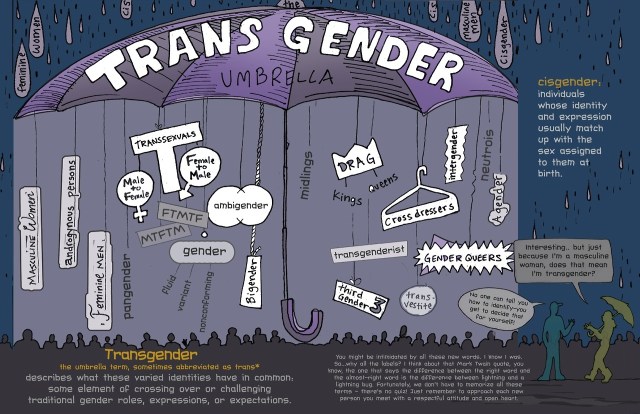 THE TRANS UMBRELLA {NOTE: GRAPHIC HAS BEEN UPDATED FROM ORIGINAL POST}

The book is straightforward enough that you could send it to your mom the next time she asks you why you’re wearing a tie, and in-depth enough that even people who think about this stuff every day can probably find something new — did you know that the tastiest papayas come from hermaphroditic papaya trees?  I also learned the term “gender surfer.” Even if it’s all familiar, you’ll definitely enjoy the illustrations, many of which are adorable and smart reinterpretations of familiar images, like classical art and board games (did I spot a marble statue of Jessica Rabbit?).  And the overall style is a really great mix of wide-eyed and wise. 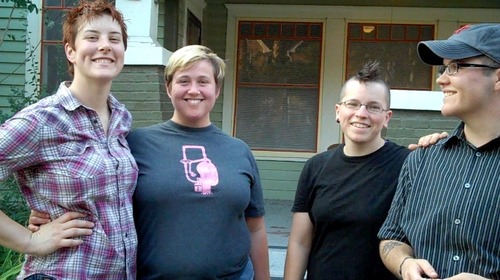 The best part?  It’s not finished!  “In the interest of obtaining constructive feedback and community responses,” the authors have crowdsourced a lot of their content, and have made drafts of the book available on the internet from the very beginning. Although the book is nearly complete, there’s still a lot of room for you. If you have a revision, comment, or suggestion, email the creators (mel@thegenderbook.com) or take to Tumblr.  If you’d like to contribute your own perspective, they’ve got a short survey on their website, and they’re always fishing for specific experiences on the book’s Facebook page.  And if you’ve got nothing to say but “keep up the good work,” you can always donate, so they can get the book printed and sent to LGBT centers and other places that need it. Happy reading!