It’s not every day that a group of current and former sex workers sue the government of Canada, but that’s exactly what’s happening with Bedford v. The Government of Canada, which is now being discussed in the Supreme Court. Amy Lebovitch, Terri-Jean Bedford and Valerie Scott first challenged three laws that criminalize various aspects of sex work in an Ontario court back in 2007. In Canada, the buying and selling of sexual services itself isn’t illegal, but Bedford, Scott, and Lebovitch argued that the laws criminalizing the activities surrounding sex make it very difficult to legally and safely participate in sex work, and that these laws violate their rights to security of the person as outlined in the Canadian Charter of Rights and Freedoms. The Ontario court agreed and tried to erase all three laws, but not before the government of Canada basically said, “Hey! Hey! Not so fast, Ontario. We’re pretty committed to the criminalization of these activities surrounding sex work.” The federal government appealed the verdict and it was brought to the Supreme Court, where the case was heard yesterday. This past week, sex workers have voiced their support for Bedford, with marches being held in big cities across the country. 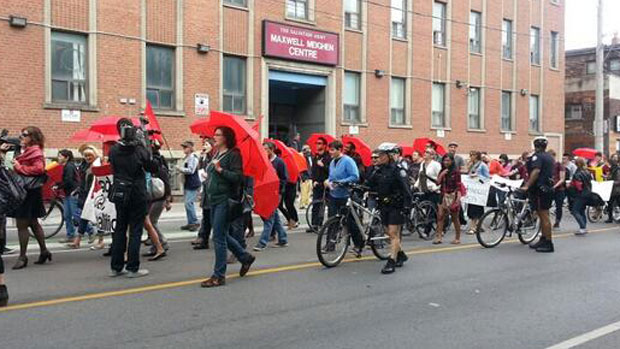 So what are these three laws that the Bedford case, if successful, could erase?

1. The law prohibiting public communication: This law prevents sex workers from publicly, openly (and therefore more safely) discussing how much they charge and negotiating things like consent and boundaries. According to the advocates supporting Bedford, “this law unfairly forces sex workers to choose between their liberty from imprisonment and charges, and the safety/security of their person from violence.” Unable to openly engage in necessary communication, sex workers have been driven out of safer, public areas, and also have to often work alone rather than in pairs or groups so as to “stay under the radar.” Because this law accounts for approximately 95 percent of prostitution charges, sex workers are forced to spend their energy on avoiding getting caught instead of openly communicating about important things like boundaries, money, and safety, and Bedford argues that this makes them more susceptible to abuse and exploitation.

2. The “bawdy house” law: Previously used to condemn gay male bathhouses, the “bawdy house” or brothel-restriction law prevents sex workers from using a specific location (either indoors or outdoors) for their work. Advocates for decriminalization stress that this law “attacks the ability of sex workers to have a safe and secure work location, where they are in control of the space, can limit the possible dangers, and employ safety protocols.” The law also puts sex workers’ housing at risk. Landlords, if they know what the location is being used for, have to evict the workers or face penalties themselves. Like the law prohibiting public communication, the “bawdy house” law isolates sex workers by creating legal incentives to work alone. If they work in a brothel or other communal work location, they are vulnerable to attacks from clients, who can call police about the whereabouts of the space once they’ve left.

3. The law preventing “living off the avails of prostitution:” This law is supposed to prevent exploitative and forced labor, but de-criminalization advocates argue that there are already laws dealing with extortion, forced labor, and rape; and that this additional one is paternalistic and treats sex-workers-by-choice as though they are unable to take care of themselves. Additionally, it puts their relationships with everyone from bodyguards to accountants at risk.

Bedford argues that together, the three laws work to hide and shame sex workers, which is detrimental to their health and safety:

“Sex workers’ rights advocates say all three of these laws serve to drive sex work more underground, where the exploitation of sex workers is more easy and likely to occur. They also feel that the laws put sex workers at risk of predatory violence because predators know that sex workers are less likely to report to the police, and that it is less likely sex workers will be believed or that they will have the violence against them taken seriously.”

The Bedford case isn’t just causing conflict between different Canadian court systems, but within feminist spheres. You only need to google Andrea Dworkin and Catherine MacKinnon to see that feminism’s relationship to sex-work has not been one of rose petals and love notes. Anti-prostitution feminists argue that all sex-work is inherently exploitative of women, especially poor women and women of color, and must be abolished. The pro-legalization community doesn’t deny that reality, but they do not agree that criminalization is the best way to make work and life safer and easier for poor women and women of color who are involved in sex work nor is it helpful when combatting sex trafficking. In Canada, the Women’s Coalition for the Abolition of Prostitution is, as you can tell from their name, for the abolition of prostitution as a whole, and not just its de-criminalization. The Coalition represents multiple women’s groups that fight to protect women from violence, abuse, and exploitation. It has been around for decades and represents The Native Women’s Association of Canada, the Canadian Association of Elizabeth Fry Societies, The Canadian Association of Sexual Assault Centres, Vancouver Rape Relief Society, and the French groups Action ontarienne contre la violence faite aux femmes (Ontario Action Against Violence Against Women), Concertation des luttes contre l’exploitation sexuelle (Coalition Against Sexual Exploitation), and Regroupement québécois des centres d’aide et de lutte contre les agressions à caractère sexuel (Quebec Group Against Sexual Aggressions).

According to the Coalition and the many groups it represents, prostitution itself is a danger to women that must be abolished:

“Prostitution itself is harmful to women. Women in prostitution in all locations endure verbal abuse and humiliation, loss of their children to adoption or state care, physical pain from repeated intercourse, mental trauma, health problems and homelessness.”

Though it is against all forms of sex work, the Coalition is in favour of certain parts of the Bedford case, mainly the idea of decriminalizing (mostly female) sex-workers while punishing (mostly males) involved in paying for or profiting from sex work. Legally, the Women’s Coalition recognizes that criminalizing public communication surrounding sex work is unconstitutional and unsafe for sex workers, but it wants to keep the provisions that criminalize living on the profits of prostitution and running a “bawdy house” to remain. What the Coalition wants pretty much already exists in Sweden where buyers of sexual services, and not the sex workers themselves, are criminalized. Decriminalization advocates argue that this is not the model to follow because it “serves to lessen the ability to clearly communicate around consent and boundaries or to screen clients. And it takes away income opportunities for those making their livelihood from sex work, forcing them to work longer hours and lower their standards for safety and satisfaction.”

It can’t be ignored that sex work in Canada is extremely racialized. A study of sex workers in Vancouver found that 50% of those interviewed were First Nations, which is not at all representative of overall population demographics. Furthermore, the same study reported that ninety-five percent of sex-workers interviewed said they wanted to leave prostitution. The Coalition stresses that, as shown by studies such as this one, sex work oppresses low-income women and First Nations’ women, and therefore should be abolished. Of course, those who support decriminalizing sex work aren’t advocating for the oppression of low income and/or First Nations’ women who have been forced into their line of work by their circumstances. They argue that, in light of the fact that the majority of sex workers want to leave sex work, it would be easier for someone to leave sex-work and find another job if they did’t have a criminal record, and that even those sex workers who want to leave may not be able to do so immediately, and up until that day comes their safety should be paramount. Furthermore, decriminalizing sex work could make it easier for oppressed women to report rape, assault, kidnapping and other crimes committed against them while working — these crimes (which are already illegal, regardless of context) often go unreported because reporting them puts the woman at risk of arrest as well.

In “Sex Work: a feminist legal perspective,” lawyer Leslie Robertson discusses the case to de-criminalize sex-work and her relationship with sex-worker-led advocacy groups such as POWER (Prostitutes of Ottawa Work Educate and Resist) and Maggie’s: The Toronto Sex Workers Action Project. Just like the Women’s Coalition for the Abolition of Prostitution, POWER and Maggie’s recognize that sex-work disproportionately affects First Nations and low-income women who already face economic and racism-related disadvantages. But unlike the Coalition, sex-worker-led groups such as Maggie’s and POWER want it to be legal to work in a brothel and profit from prostitution:

“POWER and Maggie’s told the Court that this model does not actually make their work safer. When clients are criminalized, workers will still have difficulty screening customers, clearly communicating about their transactions, and working with others or indoors. Criminalizing the clients perpetuates the stigmatization and keeps this labour underground and unsafe.”

Instead of following Sweden’s model, many decriminalization activists look to New Zealand, where there has been full decriminalization since 2003. A 2008 study of the effect of this decriminalization found that while sex workers still faced the threat of violence, abuse, and exploitation, in the five years between the decriminalization and the study, there was improvement in working conditions, though it wasn’t universal. To make environments safer, the government is moving towards written employment contracts for sex workers in brothels and says it will continue to recognize that decriminalizing sex work “has empowered [all kinds of] sex workers by removing the taint of criminality from their occupation, and part of that empowerment is to take control of their employment relationships.”

The Supreme Court of Canada will make a decision on whether or not to criminalize sex work in the coming months, but the debates around this kind of work are likely to go on for much longer. It’s a unique opportunity for a public conversation about a topic that’s usually avoided, and hopefully to improve women’s safety and wellbeing in the long run.