Hello and welcome to this recap of Supergirl Season 6, Episode 13, The Gauntlet aka The One where Kara and Lena Were Reunited.

Previously on Supergirl, Kelly called the Superfriends out and in and stepped into her power as Guardian, Lena found out she was descended from a witch and possessed the gift of magic but stepped decidedly AWAY from her power, Nyxly abused her power to trap Mxy and start to go after some totems, starting with the Totem of Courage.

Kara is in the tower when Lena comes back, and Kara is so happy her friend is back. She even goes in immediately for the hug. 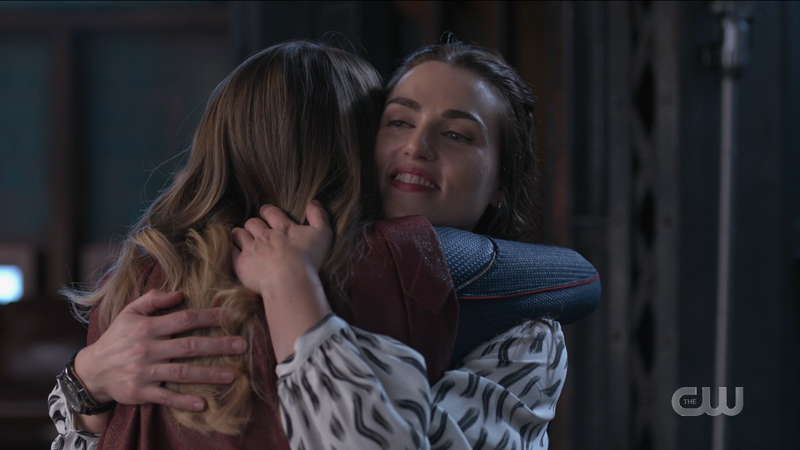 “Can you believe they let us do this now?”

Kara asks Lena about her trip Back East, but Lena is still processing it all so while she doesn’t dare lie to Kara, she dodges the question and asks to be caught up on work stuff instead. Brainy gives her the previously on recap and Kara invites Lena to go to the Fortress with her to see what they can learn about the totems. And I’m still not over Lena being so casually and warmly folded into the Superfriends’ plans. I will love this forever. 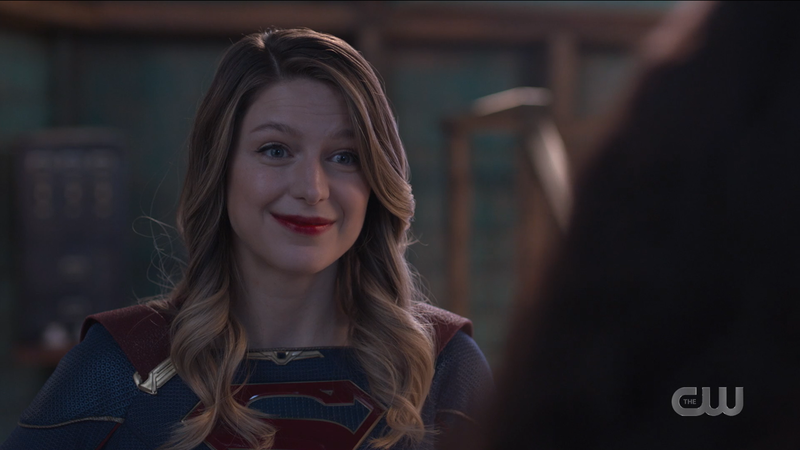 Putting aside my Supercorp feelings, I do genuinely love Lena Luthor’s integration into the team with all my heart.

Lena happily agrees and they head to the Fortress together, where they access the living memory of Vita, a Kryptonian witch who has popped up here and there across the seasons. Kara understands why they might need a witch to deal with fifth dimensional magic but Lena’s face becomes that of a person confronted with the very thing they’ve been trying to avoid. Lena asks if “magic” is even the right word for it, since it’s technically ENERGY, and surely there’s a scientific explanation. 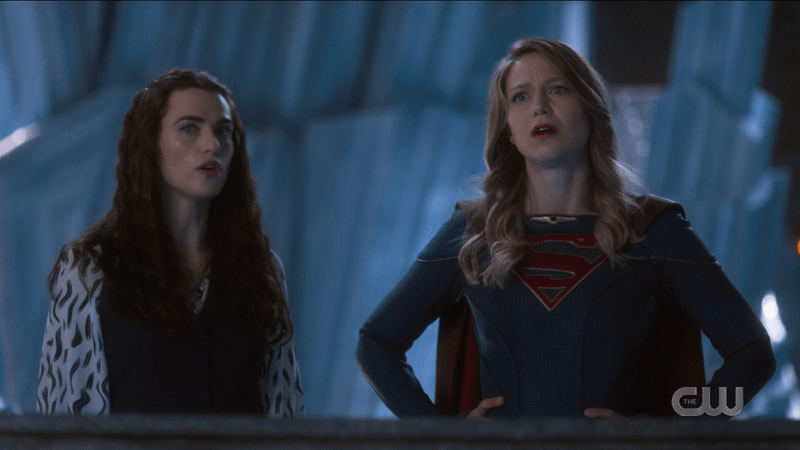 “Let me guess, magic always comes with a price.”

Rule 1, , there is an order to which you must collect the totems, and Courage is first. Rule 2, the totems are concealed as artifacts, hidden across time, important to the cultures raised around them. Which…is not a rule. But go off, I guess. Rule 3 is that you have to activate the totem before you wield it by saying the word “cursex” and the final rule is that to control the totem you must submit to a test of character, a gauntlet, and succeed. 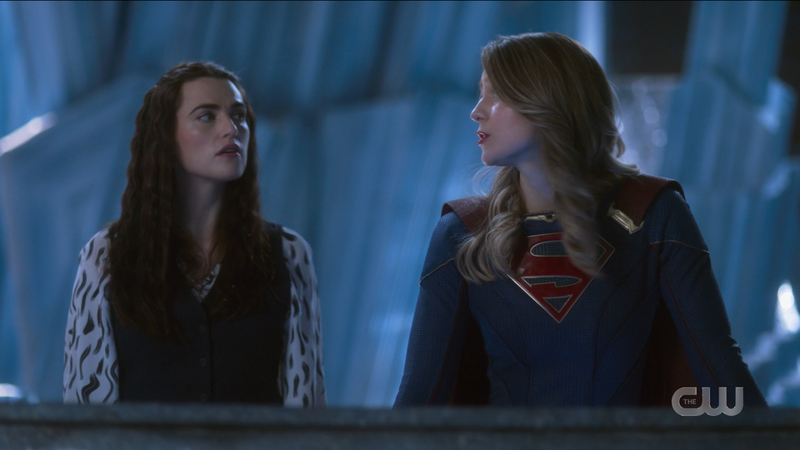 “I’ve been taking a lot of online quizzes lately so I’m sure this will be fine.”

Meanwhile, in the National City Museum of Ancient Technology and Anything Else Supergirl Happens to Need Right Now, a doctor gets a letter about her funding being terminated and she is frustrated because she wants to harness lightning for a laser. What kind of laser? Who knows. She just wants it.

Up in the glam rock spaceship, Mitch tells Nyxly how to get into the museum and steal the artifact, and she’s annoyed she can’t just snap her fingers and get her way like she could in the fifth dimension. 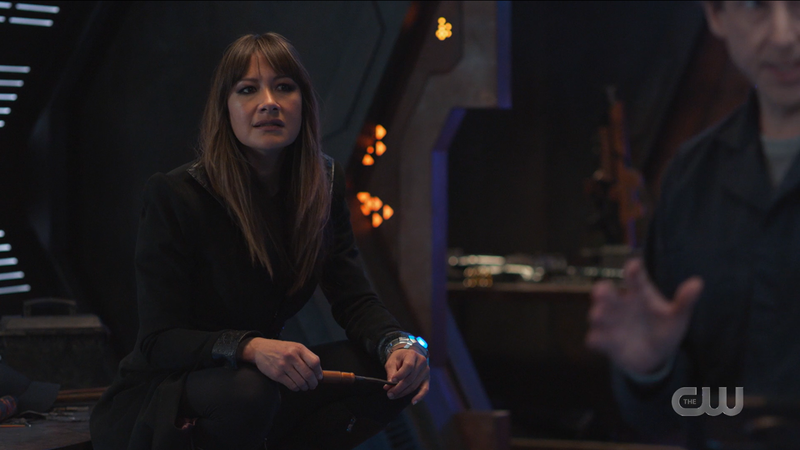 I understand. Being a human IS quite tedious.

But, it will be worth it, because the Courage totem is the first step in her elaborate revenge plot.

Back at Alex’s apartment, Alex and Kelly are chatting over coffee. Kelly thanks Alex for giving her the space to process all that’s happened over the past few days, and of course for the coffee. 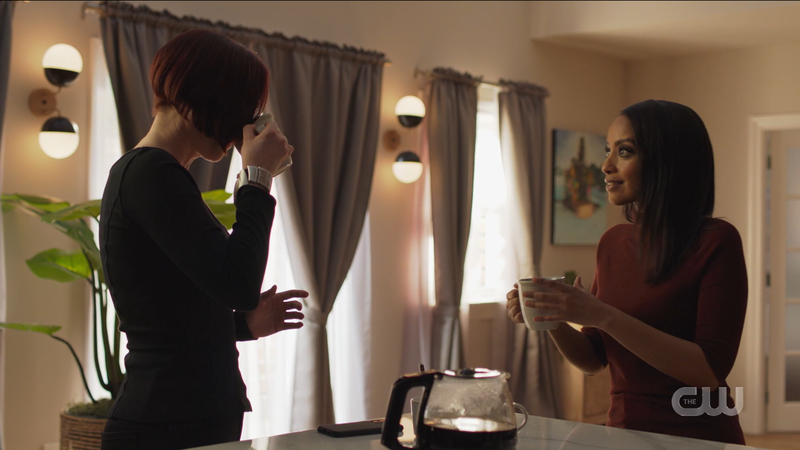 “Honestly I’m just grateful Lena and I can be in the same episode, even though we had to split it and not share scenes.”

Alex gets a call from the Tower and invites Kelly along, but Kelly has more work to do with Orlando in the Heights, and Alex just beams proudly at her before asking if she needs any help. Kelly assures her she doesn’t so Alex kisses her on the cheek as they go their separate ways. 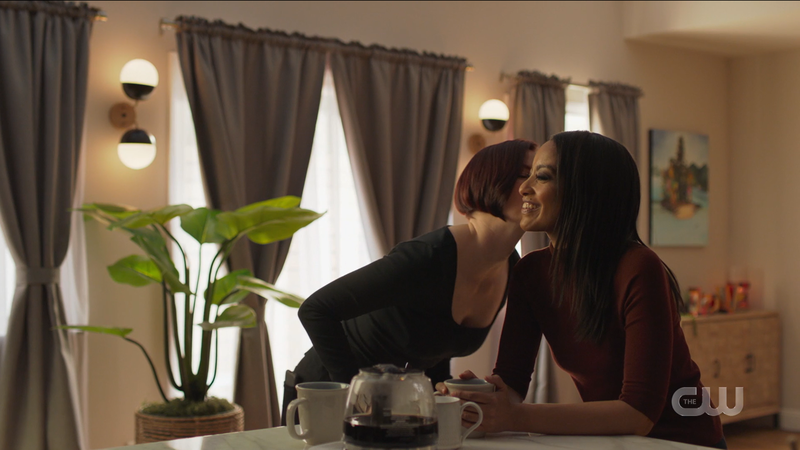 In the tower, Alex and Lena do some tag-team science to narrow down potential artifacts that could be the totem in disguise. 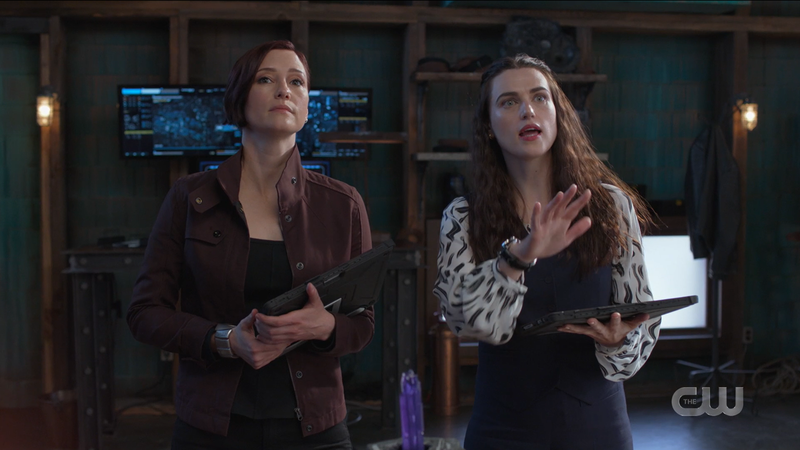 Crazy science, if you will.

There are still so many options that it would take Supergirl a month to investigate them all, but just then they get a ping from the computer telling them that Nyxly is trying to steal the slingshot David supposedly used to kill Goliath that just got delivered from Warehouse 13.

Nyxly smash-and-grabs the slingshot and starts to run out as the alarm sounds when the Superfriends stop her. Kara says, “Hand it over,” and Nyxly just laughs in her face and says, “No,” which continues to be adorable. I love her streak of joy amidst her villainy. 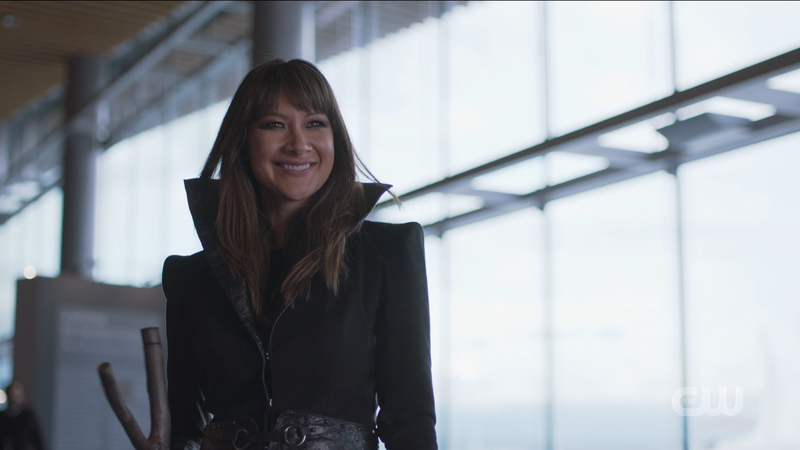 I would take ten thousand Nyxlys over He Who Shall Not Be Named any day.

Nyxly decides that her only way out is through so she utters the magic word to activate the totem and starts to see a blast from her past while a blast of energy fills the room, and when Supergirl makes a play for the totem, it splits in two.

The Superfriends take their half of the totem back to the tower, where Lena examines it, learning that it’s definitely radiating fifth dimensional energy. 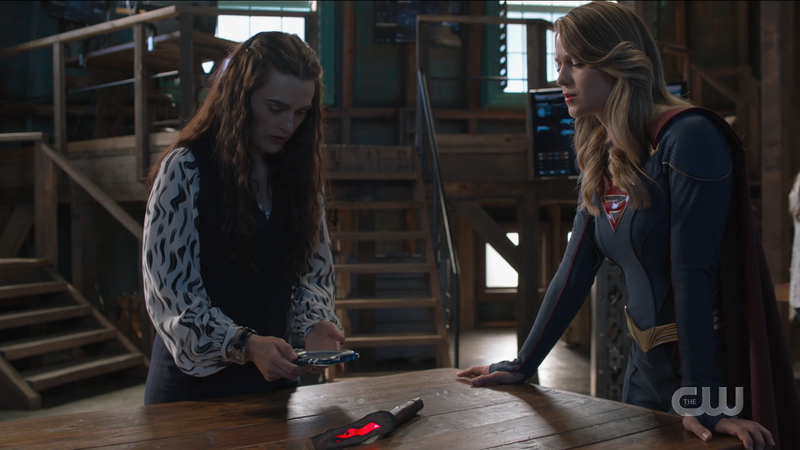 “I can contact my old friend Helena G. Wells to ask her about it…”

They turn on the crystal to ask Vita, but she’s tired of being a hologram so she jumps into Brainy’s body instead. She tells them that they need to unite the halves of the totem to gain full control of it, and to get control of her half, Kara will have to pass her gauntlet before Nyxly does. And she has to face it alone. 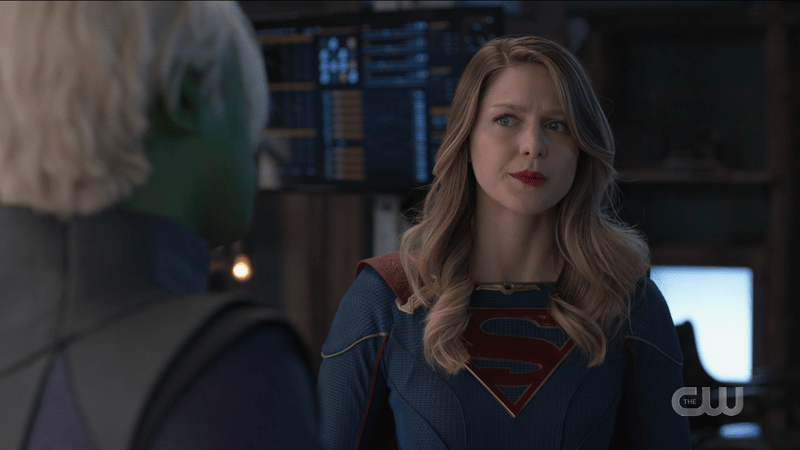 “But I’m the superhero who LIKES working with her friends! Unfair.”

Lena yeets Vita out of Brainy and rushes off to make sure it never happens again while Kara heads to the training polygon to enter her gauntlet. A voice tells her she must face her past, face herself, and face the moment she lacked true courage. So she’s surprised when she finds herself in a flashback of the day she became Supergirl, when Alex’s plane was going down and she had no choice but to try to save her. 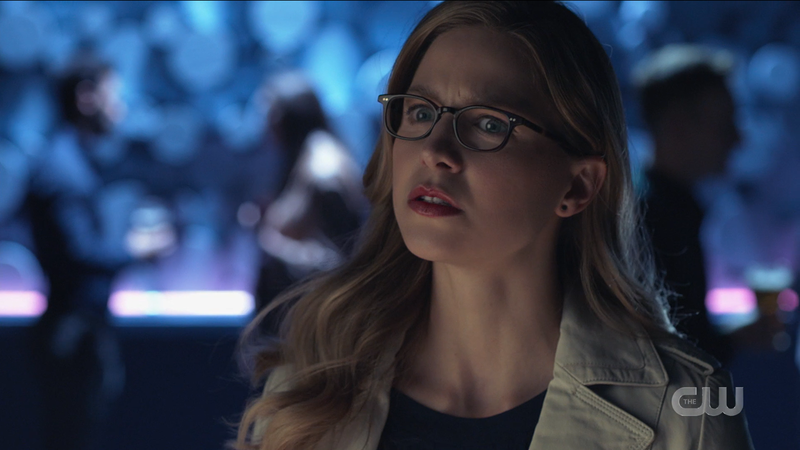 Did they just part her hair on the other side or did they find the only good wig on the CW lot?

After she goes through the motions, on her way back to her loft she hears a cry for help that she remembers ignoring the night of for fear she would be exposed. Kara is clearly not overthinking the riddle the way I was; I would have thought she had to just witness what ignoring the cry for help caused; have the courage to face the consequences of her decision. But Kara can’t help herself and decides to save the man this time, thinking that it was the most courageous choice. However, she soon finds herself back in reality with the voice telling her that she has failed the gauntlet. And so, everyone who had been in the museum when the totem broke gets a little jolt of courage.

Nyxly activates her half of the totem too and enters her own gauntlet with the same rules. She finds herself back in time, on the day of the coup she planned with her brother, which was stopped by her father, who praised his son for his bravery and scolded his daughter for her betrayal. Nyxly, filled with years of rage and resentment, decides to change this moment by killing her father this time, but that causes her to fail the gauntlet, too. 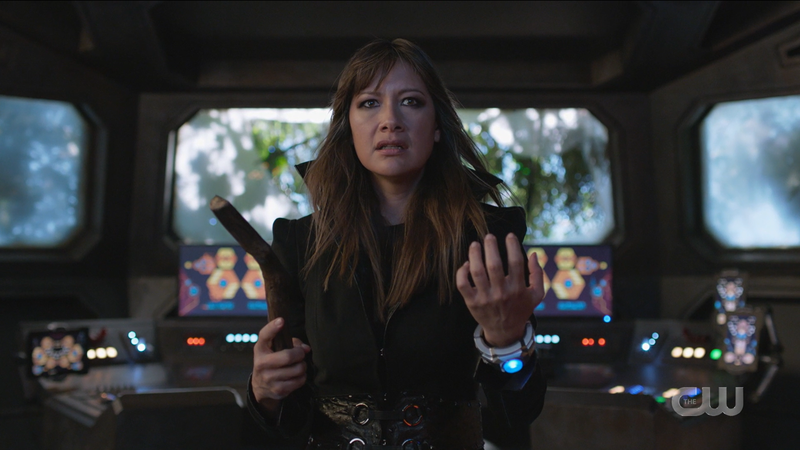 Is Nyxly getting more attractive as she gets more evil or is this a me problem?

There’s another surge of courage, and this proves too much for the citizens of National City. The museum breaks out into mayhem and fighting and Spike the Iguana is there so he turns back into his dragon form.

The Superfriends show up and Alex’s practical tactical brilliance has been fully replaced by taurine and raw courage, and she runs off to face the dragon head-on. J’onn yells after her that he’s proud of her and Kara just looks at her team like they are all playing a practical joke on her. 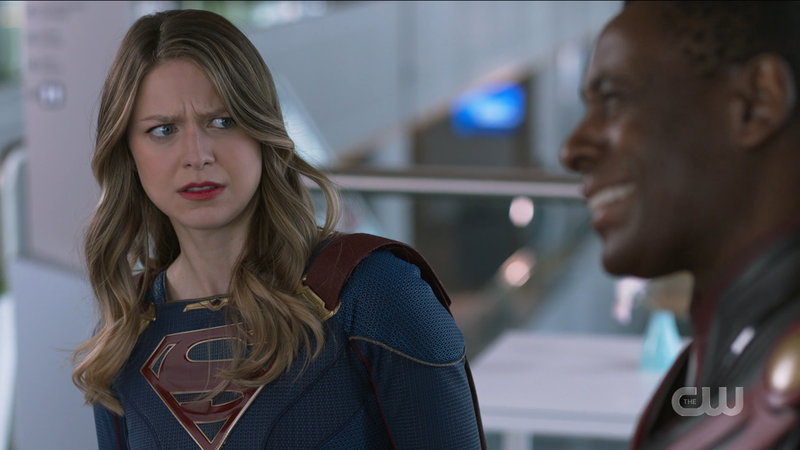 Me when everyone on my Twitter timeline was talking about how much they loved Mare of Easttown.

The scientists fight over the plans for lightning harnessing, Brainy miscalculates some punches, J’onn tries to reason with the dragon, and Alex fights with gusto. Kara steps in and manages to get everyone to listen to her long enough to de-dragonify the iguana and head back to the Tower with her.