Hello and welcome to this recap of Supergirl season 6, episode 12, “Blind Spots,” aka the one co-written by Azie Tesfai herself!

At first it seems like we’re going to pick up where we left off, with Nyxly fondling her crystal ball and thinking about the totem, but before things can progress, we rewind instead. And in a rare turn of events, we actually get to see what Kelly was doing during the last episode while the Superfriends were up to their impish shenanigans.

Kelly starts her day by calling Joey to check in, and is happy to hear him talk about how excited he is for his new apartment with Orlando, and how he’s taking a friend to see it now, but her smile quickly fades when she hears him scream as the building collapses.

Kelly runs to help them, pulling rubble off Joey and his friend, and when Orlando tells her that ambulances don’t exactly rush to the Heights, Kelly decides to take the kids to the hospital herself since Joey is having trouble breathing.

But by the time she gets there, the hospital is already overwhelmed, they need more vents, there’s nothing they can do to speed up helping the victims of the building collapse. 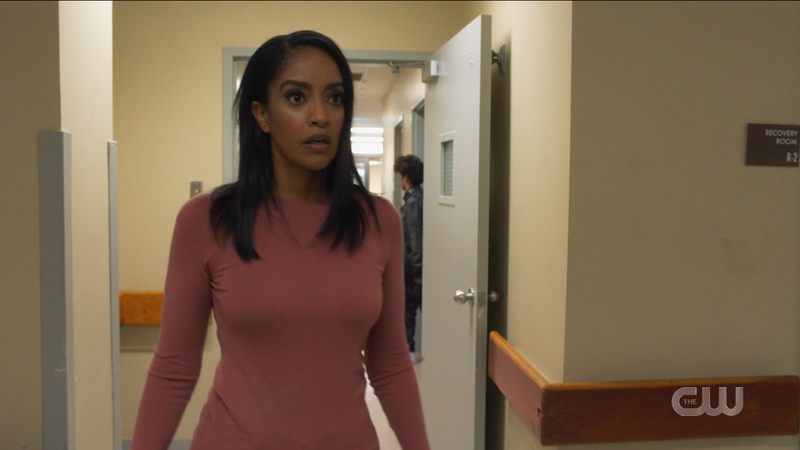 Kelly, if I’m ever on a ventilator and a literal child needs one, unplug me!

I finally had to learn the evil Councilwoman’s name, and it’s Jean Rankin. She was close enough to the collapse to need to be in the hospital too but she demands to be taken to a private hospital instead; but when Kelly asks for her help, she assures her she’s “freeing up a bed” out of the goodness of her cold, black heart. But Kelly isn’t stupid.

Orlando suggests they ask Supergirl for help, but when Kelly calls Alex, she says they’re busy trying to stop Nyxly; in the meantime, at least, she’ll have some of her med school friends send respirators over. 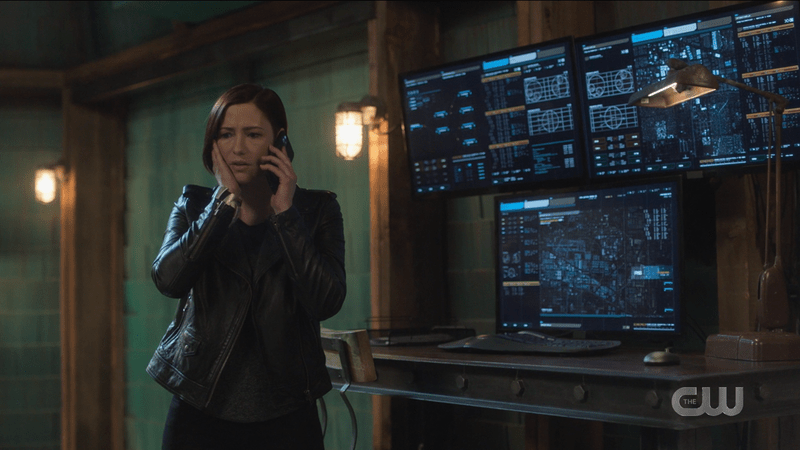 “Yeah I have some connections at the Grey Sloan Mercy Grace Memorial Hospital for the Disaster Prone and Overdramatic, presuming there hasn’t been a sharknado there this week they should be able to help.”

Kelly looks a little hurt as her girlfriend hangs up on her and goes back to looking after Joey, who is starting to glow blue on the inside, along with the other survivors.

Once she’s in her fancy hospital, the doctor suggests resting will help her heal, but living by the mantra of no rest for the wicked, Rankin demands some trial medicine, and even though the doctor doesn’t want to, he eventually “leaves” a needle near Rankin’s bed and she injects herself, and her wounds heal up immediately, but her assistant passes out beside her.

Back at the hospital, Kelly sees the news reporting on the giant cat the Superfriends fought, but nothing about the building collapse. She calls her brother and leaves a message, venting about how she has even suited up as Guardian yet and fighting for the community is already so exhausting, especially since she feels like she’s fighting alone. She doesn’t know how to get people to care, and she feels so… powerless.

Having the opposite problem in Newfoundland, Lena is learning magic from her mom’s friend and is already way too good at it. 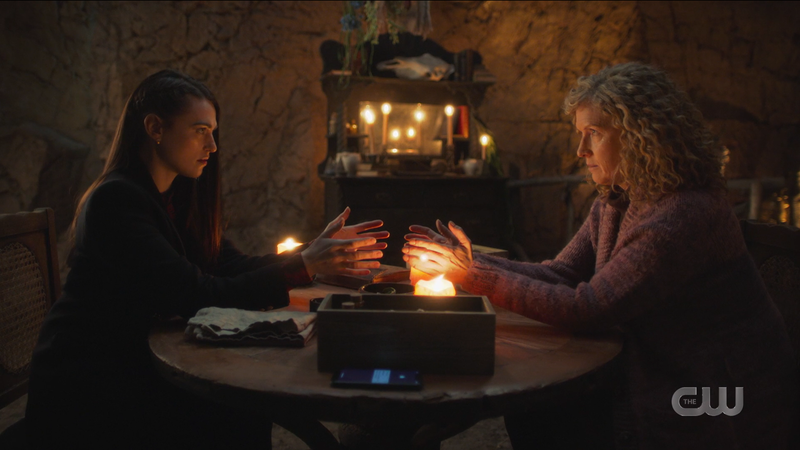 Florence wants her to try again but Lena gets a news alert about the Nyxly business so she decides to head back to National City to help them, instead. Florence tries to get her to take her mother’s Grimoire with her, but Lena just leaves without looking back.

At the Tower, the Superfriends decide to shift their efforts into finding Mxy instead of Nyxly, since they think his power will be easier to track, so Kara needs to take Alex to the DEO Desert Facility to get something for Brainy. Alex hesitates, worried about Kelly, but she decides Kelly will be okay without her help and decides to leave anyway. 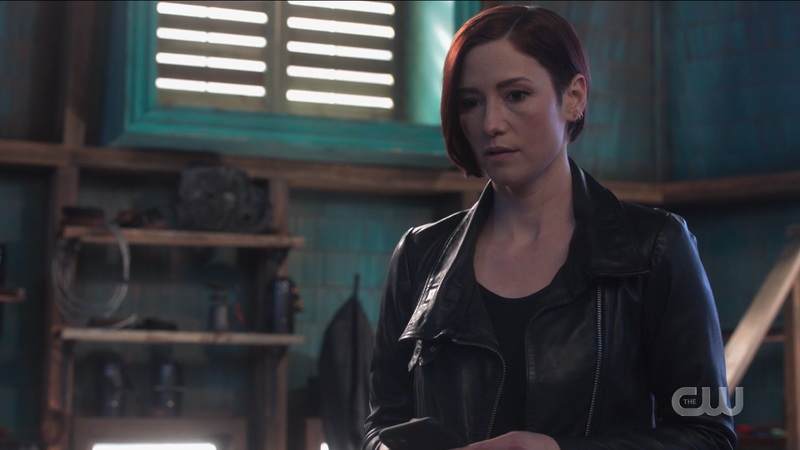 Wanting to check in on someone but also not wanting to bother them/seem overbearing is a regular struggle in this household.

Kelly sees the CATCO news channel finally reporting on the building collapse… but it’s talking about the traffic it’s causing, not the people struggling to get the help they need. Kelly calls Andrea about it, but Andrea says the Heights “isn’t newsworthy” for her demographic and brushes her off, frustrating Kelly even further. These are the people who are supposed to be her friends, and no one is listening. 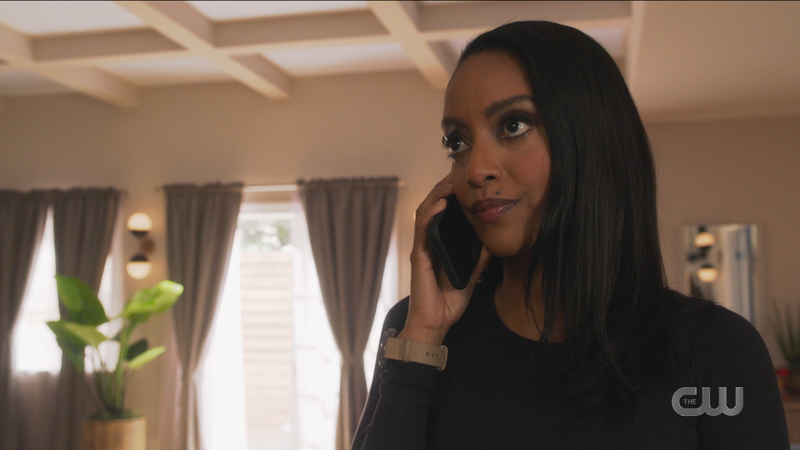 Andrea, you have ONE (1) friend, it wouldn’t have killed you to try to get into Kelly’s good graces.

Kelly hears a knock at the door and when she answers it, she’s surprised to find John Diggle, who apparently has been wandering around the Arrowverse since his show ended. He says that James sent him because he was worried about Kelly, that she’s leaning on her military training and not stopping to take care of herself while trying to take care of everyone else. She explains that she’s trying to help and just feel so… alone. 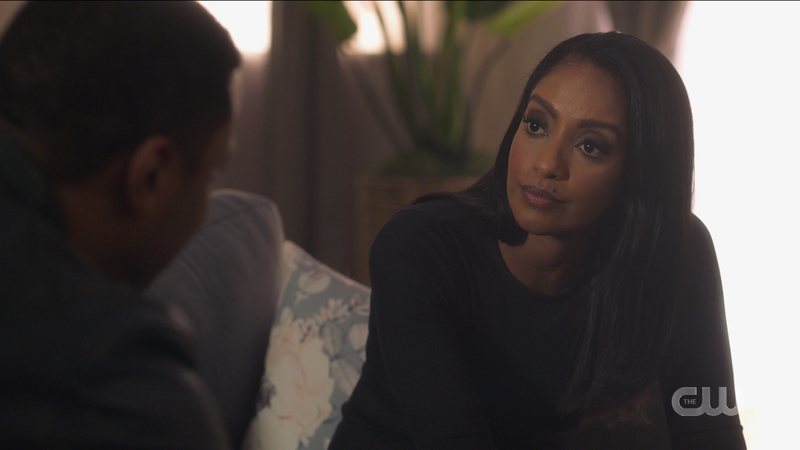 “And there were so few Black characters on this show over the years they literally had to import one from another show to help me.”

She tells him that Alex sent respirators to help but no one else has done anything else to help her. Diggle understands her struggle, and wishes it didn’t need to come to this, but that maybe she just needs to show them what’s going on. Really put it in front of their faces, make it impossible to ignore. So they head down to the site of the building collapse to see what’s really making these people so sick. And sure enough, as soon as they get there, they find a blue glowing light and follow it into the rubble in search of answers.

In a fancy car nearby, Rankin observes the rubble and is pleased that she got to look like a supportive community leader but will still end up getting her way. Speaking of getting her way, she says she really wants a sandwich, and one immediately shows up in her hands. And once again, her assistant passes out about it. And she thinks she can use this new power to transform the neighborhood.

When Alex and Kara come back with some fifth dimensional energy trackers, they follow the signal and are surprised that they lead them right to Kelly and Diggle. They catch each other up and Kara explains that she feels bad about accidentally powering up Nyxly’s device. 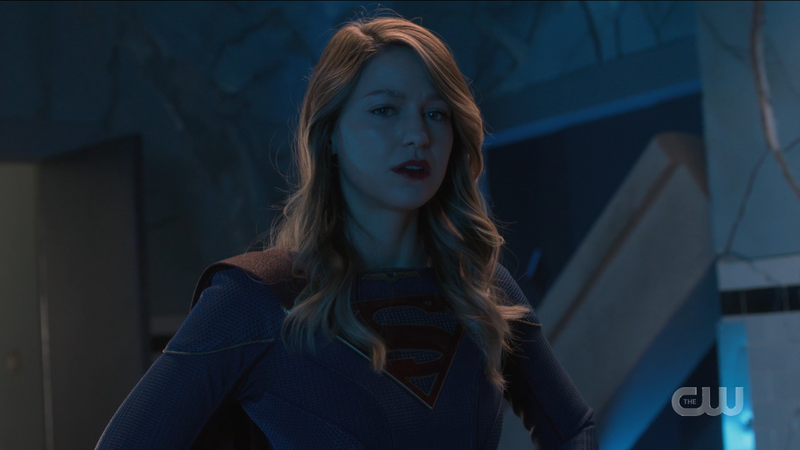 One time in high school I stepped on a girl’s flip flop and broke it and I still feel bad about it, so I understand.

They realize that their cases are connected, and that they can remove the energy from the debris, which will help them find Nyxly AND help the citizens of the Heights. A win-win.

Meanwhile Rankin is really leaning into her new powers, conjuring money to bribe some constituents into voting for her, completely unaware that every time she wields her power, she’s taking it away from others. Not that I think she would mind knowing locals were paying the price for her magic.

Kelly tells Kara about the damage to the Heights, about the lack of resources and support, and she begs her to help. Not just Supergirl, but her girlfriend’s sister, her friend. But Kara assures her that when they stop Nyxly, Mxy will be able to snap his fingers and put everything back the way it was. She flies off as Kelly is trying to explain that making things “the way things were” wouldn’t actually be helping, but she’s already gone. Ignored once again. 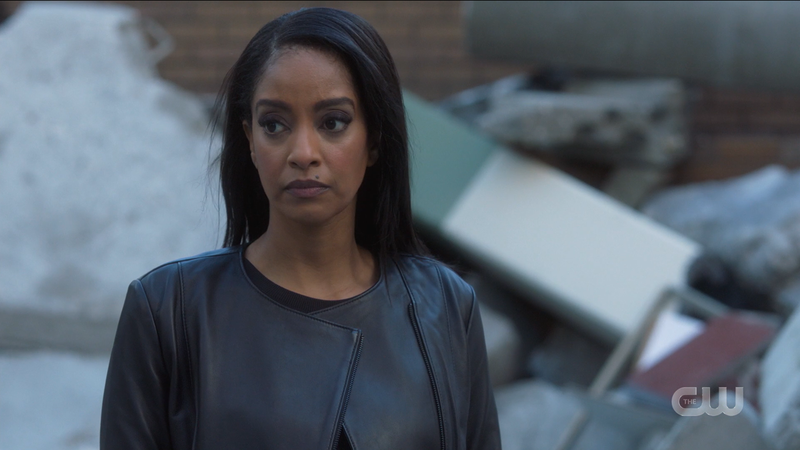 “A girl is absent for ONE episode and suddenly she’s invisible.”

Kelly gets a call from Orlando and Joey is getting worse even though the doctors don’t know why. Alex checks in on her and Kelly thanks her for the respirators; the only thing anyone has actually done for her today. 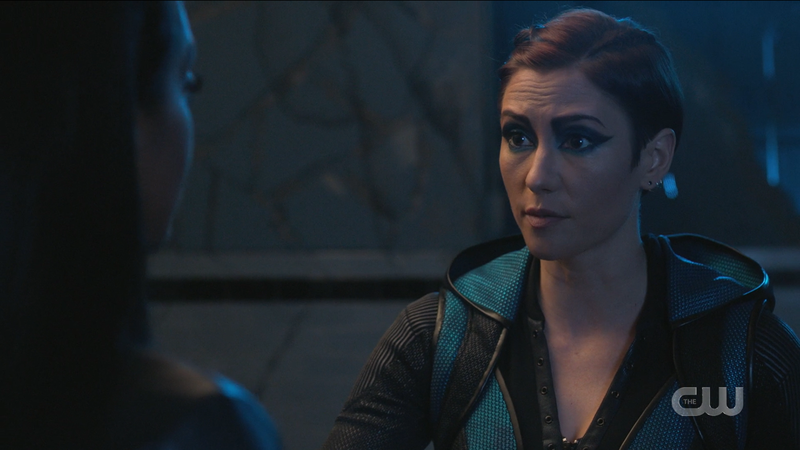 Kelly starts to explain that there’s something else going on, but Alex agrees with Kara that stopping Nyxly will “fix” everything and heads back to the Tower.

Nia, who Kelly wasn’t even talking to but was listening more than Alex apparently, gives Kelly one of the trackers to see if maybe they did miss something. Kelly quietly thanks her for this crumb of support. 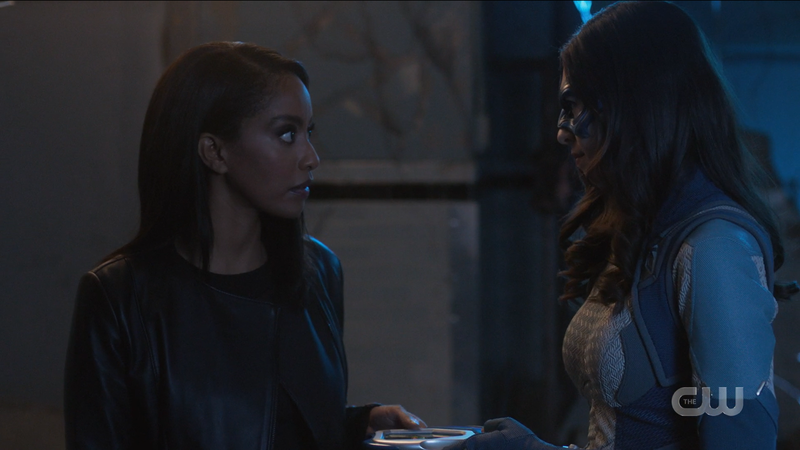 Giving someone the tools to help themselves is better than nothing I guess but also like SOMEONE HELP HER.

Kelly uses the tracer and it leads her to Rankin, who is radiating fifth dimensional energy; Kelly thinks it’s a little odd that she looks good as new while Joey and the others are getting worse. Rankin is giving a press conference and when asked about the people who are still sick, Rankin gives a tone deaf answer, insisting she feels great and that everyone else should just… try harder to feel better?? Orlando runs out and asks his own questions, wondering what fancy treatment she got that the others in the community didn’t have access to. She rattles off some Fox News lines about how they should pull themselves up by their bootstraps, which isn’t even relevant here, but what IS relevant is what Orlando responds, which is that the problem isn’t that they aren’t pulling themselves up, it’s that the system is holding them down. A guard goes to get Orlando to stop asking questions by way of nightstick, but Guardian steps in and stops him with her shield before he can.

Guardian chases after a fleeing Rankin, but she has powers now. They fight and Rankin speaks her greatest insecurity out loud, “You’re not strong enough.” 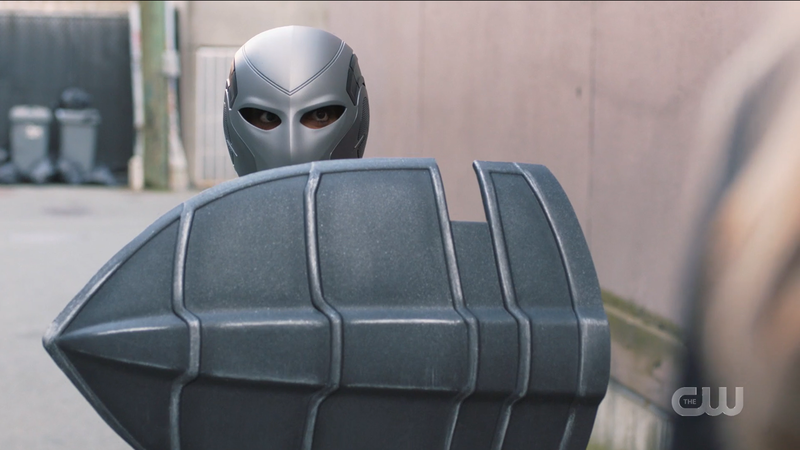 She looks like a little sister wearing her big brother’s cosplay and it’s very cute but also looks very uncomfortable.

But no matter how much she doubts her strength, no one can deny Kelly’s smarts, and she manages to grab some of Rankin’s hair before she disappears.

She takes the hair back to the Tower and demands to know where the Superfriends were when the fight broke out. She tells them Rankin is the source of the energy but that she couldn’t fight her alone. Kara starts to apologize but Kelly interrupts. She has something to say.