Over the last few years, sex toy companies have asked us to review their toys in exchange for, you know, their toys. Today we’re reviewing the Iroha Plus Tori by Tenga, which you can purchase through Babeland.

Right out of the box, I have to say it: The Iroha Plus Tori is cute. The product’s website says it’s “shaped like a bird,” but when it’s perched on its clever charging base with the clear dust cover snapped over it, it looks more like a sweet little woodland grub in a terrarium (although its unfortunate deep red color led a friend to call it “a hunk of liver”). Because of its unique shape, this is the kind of sex toy you can display on a bookshelf or on top of a dresser without worrying too much about who might see it.

When I picked it up, I realized the Tori is also a very soft toy. This is my first vibe that’s had a squishy texture beneath its smooth silicone, which the company calls “Soft-Touch.” It feels delightful in my hands, but the fine surface creases running the length of the silicone, which seem to be purely cosmetic, make the Tori slightly harder to clean after use.

The Tori is curved with buttons that are easily accessed on its underside. The vibration is strong, although it’s not quite as rumbly or deep as the vibration of larger toys. And while the vibration seems to be slightly stronger in the longest of the protruding tips (the “head” of the bird), I can still feel it throughout the body of the toy. 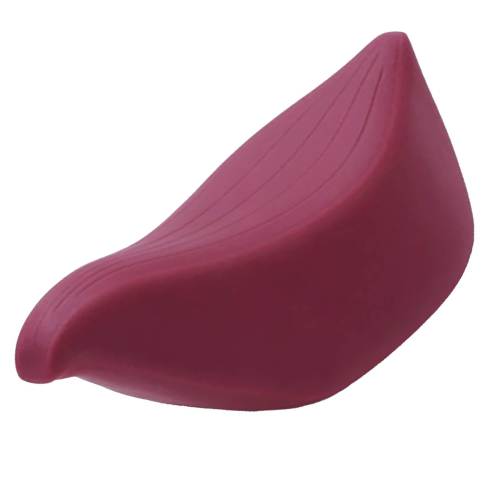 When the Iroha Plus Tori arrived, I’d had a busy few weeks, so let’s just say I was eager to test out this cute lil’ guy. Because of the toy’s ambiguous shape, I wasn’t immediately clear on how to use it. For my first try, I opted to press the whole body of the toy up against my vulva, avoiding direct clitoral stimulation, which can sometimes be too intense for me. The Tori was a great shape for this — I could easily access its two simple buttons to play with the five strength levels and vibration patterns (although the patterns only seem to be available at full-strength vibration) and use my hand to rhythmically shift how firmly the toy was pressing against me. First use was a very rousing success!

Later, I learned that the Tori is waterproof, and Tenga’s website suggests that the elongated tip be used for insertion. Bath time, however, was pretty much a failure. While there can occasionally be a benefit to some very light penetration, attempting penetration with the tip of this toy felt like…well, if I knew my tools better, I’d have a metaphor for you, but it felt like the wrong tool for the job. With the tip of the toy inserted, I couldn’t quite reach my clit with the toy’s body, which would’ve made insertion a more satisfying experience. I switched over to using the tip for direct clitoral stimulation, which proved to be more effective, although not as satisfying as the more rumbly vibes I own.

While the Iroha Plus Tori is very cute and has a beautifully designed charging case, at a price point of $138, I just can’t quite say it’s worth it. I wanted to love this toy; instead, it will take its place next to the other toys I’ve owned with vibration that’s just a little too buzzy. But if you like toys that are on the smaller side, if you want a quality vibe for traveling with, or if you want something you can display proudly in your bedroom without anyone raising an eyebrow, this might be the toy for you!