When they get there, Lena confirms that this is fifth dimensional energy at play, and Alex isn’t sure it’s such a bad thing. But Kara says that laughing in the face of danger almost got Alex killed. J’onn starts to wax poetic about his team of Earth children when he realizes the thing he was made to be courageous about is sharing his feelings, which Lena doesn’t love as a general possibility for herself. 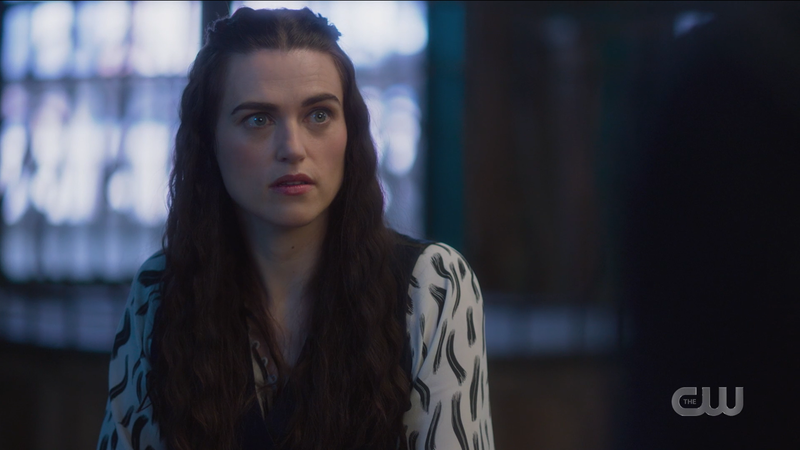 Brainy comes in and tells them that Nia had the courage to try to access a new dreamscape, and he can’t wake her up. Alex tells Kara to be brave like her and try the gauntlet again, but Kara is worried about making this worse. 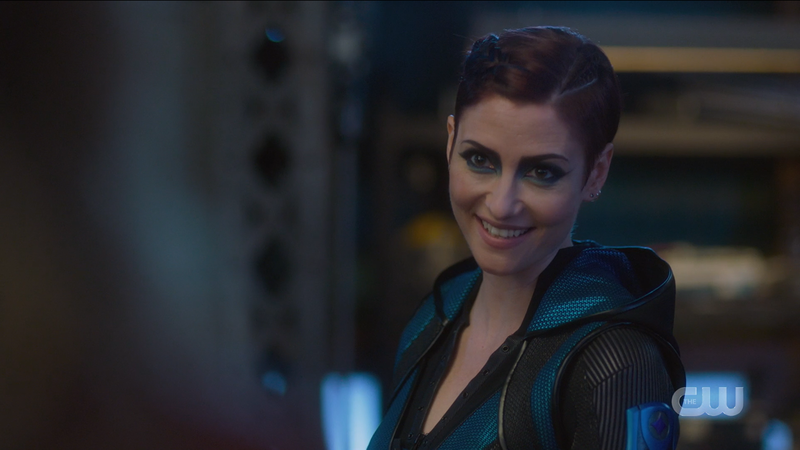 This has the “DO IT” energy of my chaotic D&D party.

Up on the spaceship, Nyxly can’t figure out where she went wrong in her gauntlet vision. Mitch says maybe she’s supposed to kill her brother instead, but the very thought of it upsets Nyxly too much. Mitch says that maybe because she hates the idea, it means it’s the courageous thing.

Supergirl is back in the polygon of pondering, ironically trying to muster the courage to go back into the courage gauntlet, when Lena sits next to her, also at a loss for what to do next. 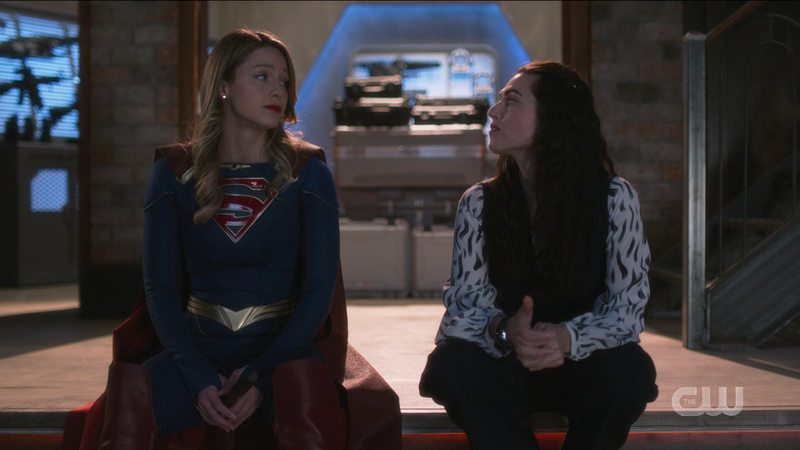 I mean I could come up with a few ideas.

After a minute of discussing the gauntlet and the problem at hand, Kara looks to Lena and asks if she really doesn’t believe in magic. Lena decides that’s not relevant right now and says, AND I QUOTE, no I am NOT making this up or dramatizing it or paraphrasing or copy/pasting from Stay the Night again, Lena Luthor literally says to Kara Danvers, “I believe in you.” 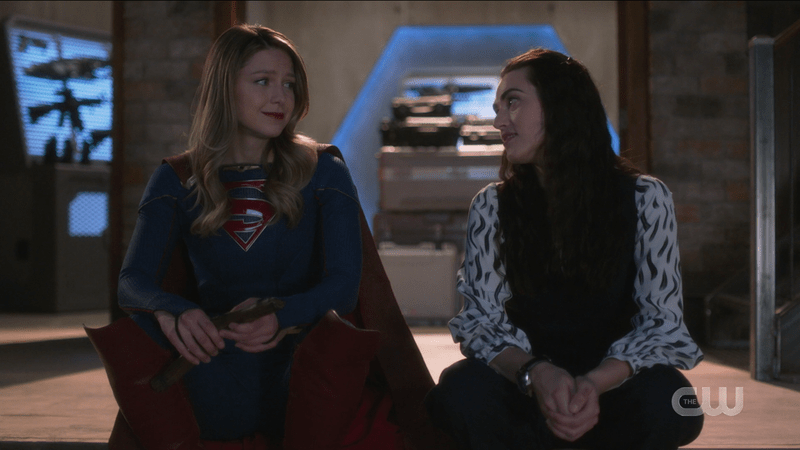 And she didn’t even need to be affected by the Courage Totem to tell her.

Lena reassures her that no matter what it’s called, they’ll figure out this problem, together. And while Kara figures that out, Lena is going to talk to Vita and see if she can glean some more answers.

Kara tries the trial again, but fails again, causing another surge of courage, causing the scientist to skip the trial process and go right to causing a lightning storm in order to harness its energy.

When Lena fires Vita up again, the technopagen reveals that she knows Lena has access to magic. Says hypothetically an “Earth witch” could be strong enough to help stop Nyxly, and might explain why she wasn’t affected by the totem’s surges. She says that sometimes magic defies the laws of science, which stresses Lena out a bit, though she seems to be starting to come to terms with it. 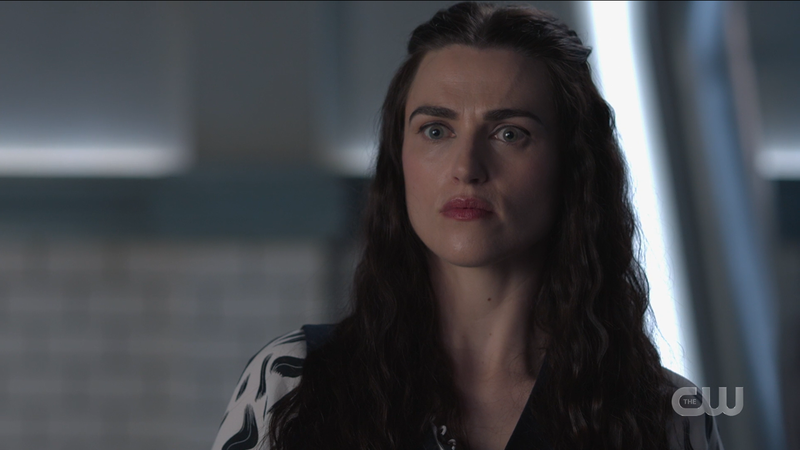 I believe in my heart that Katie McGrath is a witch. It’s the only explanation for :gestures broadly at her: all this perfection.

When Lena rejoins the Superfriends and asks about the storm, Brainy tells them about the scientists he overheard at the museum, and they set out to find them.

Nyxly restarts her gauntlet trial, too, but instead of killing her brother like Mitch suggested, she just confronts him. Admits he broke her whole heart, her baby brother, the child she helped raise, her best friend. She trusted him, and never would have hurt him, and he betrayed her. 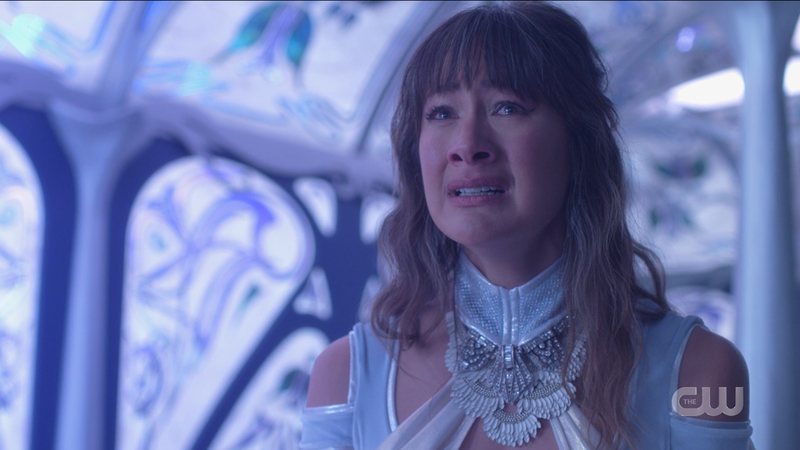 I was perfectly happy loving Nyxly as a cartoon villain, I didn’t ask for all these big-sister/narcissistic parent feelings!

This display of courageous vulnerability was what she needed to do to pass the gauntlet, and the totem shards start charging and trying to reconnect. Kara holds tight and asks for help containing it, so Lena gives Kara a box to put her shard in, if you know what I mean.

Brainy thinks he found the scientist, but he’s wrong, which Lena points out is the fourth time today. Turns out he WAS affected by the totem, and he was granted the courage to be wrong, meaning he’s mostly been guessing lal day. Kara wants to slow down and make a plan but her team is off the rails and already out the door.

Supergirl finds the scientist (with Lena’s help instead) and breaks her machine to try to get her to see reason. She looks around and sees the chaos around her, all caused by the totem. 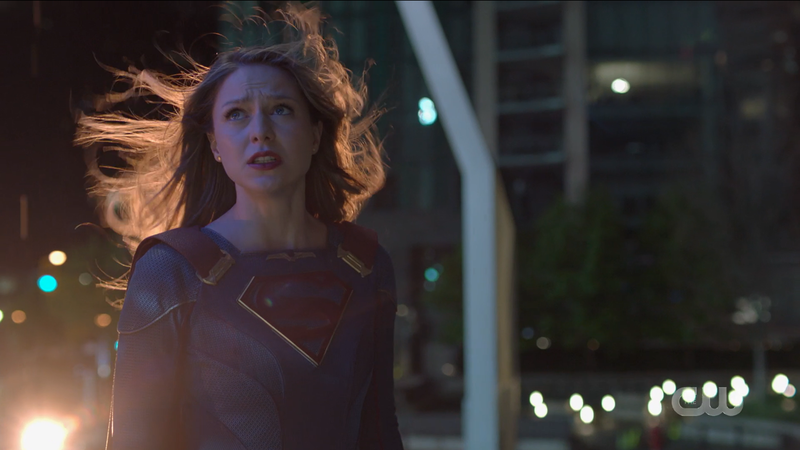 “Besides, this lightning is doing nothing for my hair.”

So Supergirl tells Lena to release the totem. She needs her team back to fix this, she can’t risk this getting any worse than it already is. So Lena listens and everyone is restored to the normal amount of courage as the totem finishes its transformation in Nyxly’s hands.

The scientists, now with her faculties about her, realizes she made a mistake and tells them that they need a negative ionizer, which Sentinel can make with her glove. The scientist is worried about it being dangerous, but just in time, Guardian arrives to have her back. 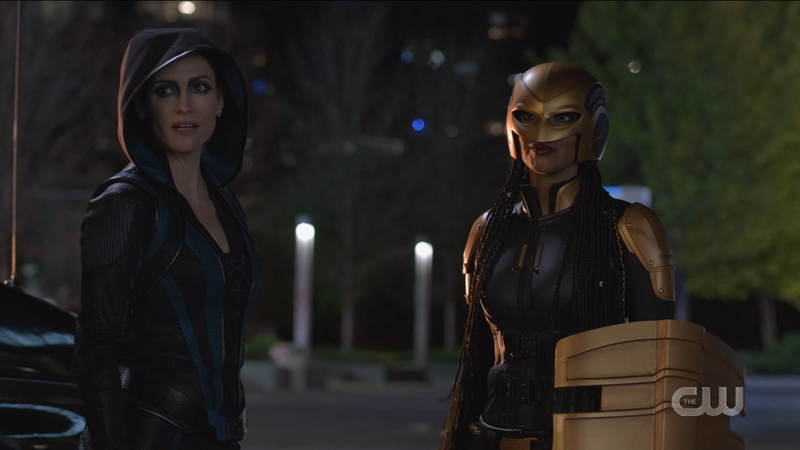 A Sword and her Shield.

The three fliers go up to stop the storm in the sky while Guardian protects and Sentinel de-ions the air or something, teamworking the storm into submission.

When the totem is complete, Nyxly and Kara get glimpses of each other’s gauntlet, and Supergirl falls from the sky.

When Kara wakes up, Alex and Lena are by her bedside, relieved she seems okay. 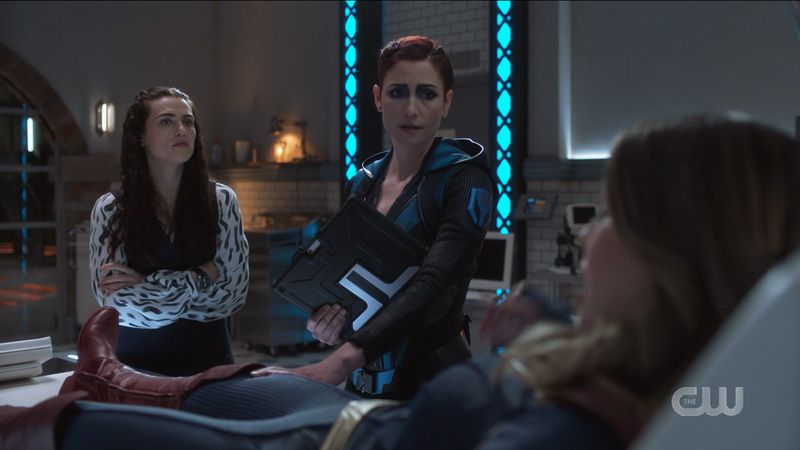 My kingdom for a Dansen/Supercorp double “date” scene.

Kara tells them what happened, and Lena thinks a psychic connection makes about as much sense as anything else they’ve been confronted with today. Kara knows Nyxly can sense her too, and that they need all the power they can muster to to help stop her, causing Lena to look a little guilty. 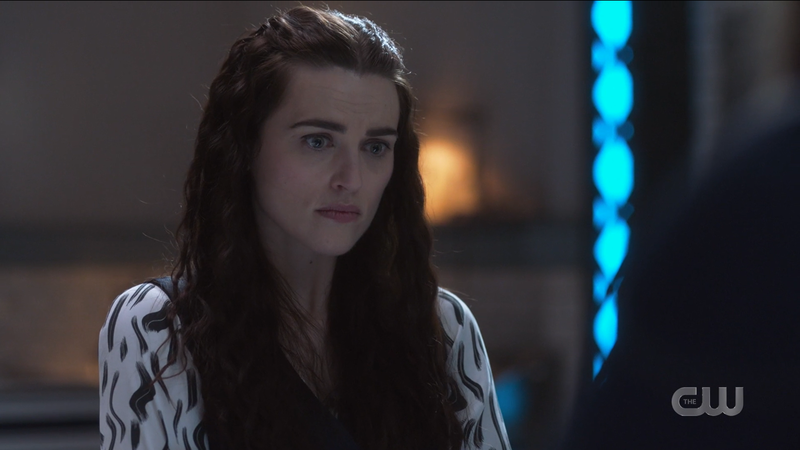 I want to murder everything that makes Lena make a sad face, including the very concept of guilt.

Back at the lesbian lair, Kelly is tending to Alex’s wounds, telling her that chicks dig scars, almost like they heard our cry for more on-screen Dansen conversations. 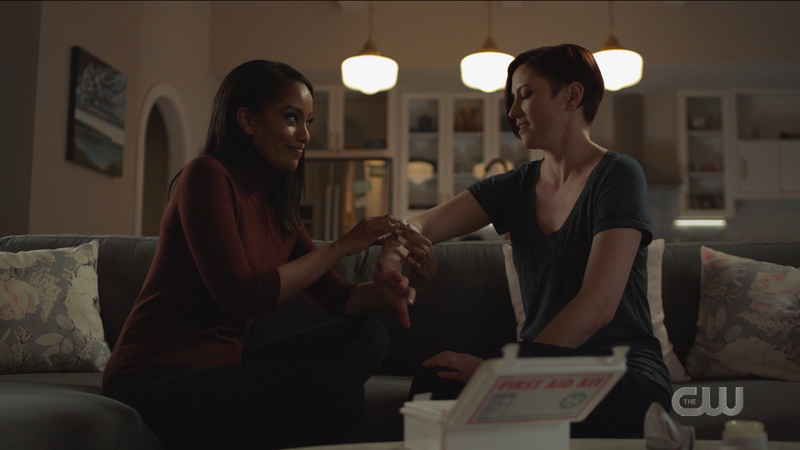 Genuinely love to be pandered to.

Alex apologizes for pulling Kelly away from her Heights mission, but Kelly was happy to help the love of her life. She wants to be partners in the field and at home, because she loves Alex very much. They’re part of each other’s worlds, and on the same team, and they’ll find that balance eventually. 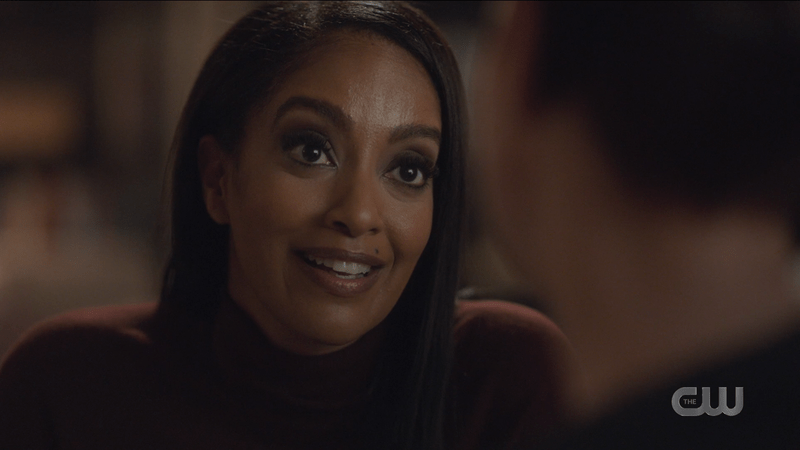 I know it won’t happen but all I want is a Guardian/Sentinel spinoff, and I’m GONNA keep talking about it.

Meanwhile at the loft, Kara and Lena are hanging out! Alone! Together! Looking cozy af and eating…pie?? Lena looks more at ease than we’ve ever seen her, hair down, unheeled feet tucked up under her, chatting with her gal pal. 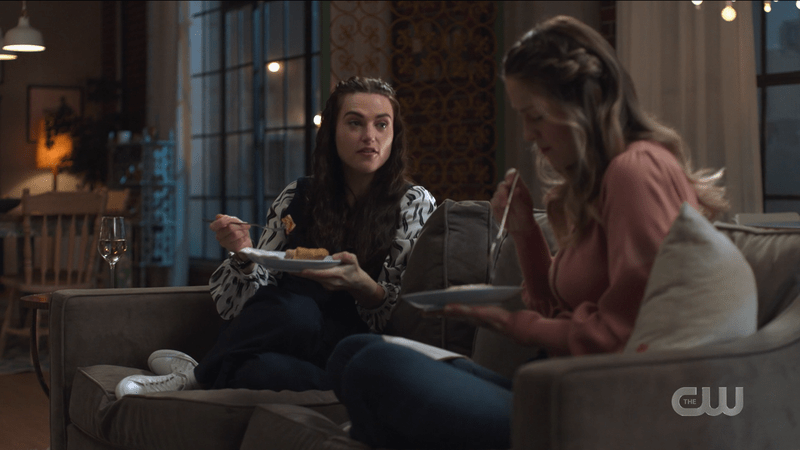 JUST A CASUAL GAL WITH HER PLATONIC PAL

Kara is lamenting not passing the gauntlet, and explains what she saw to Lena, but Lena doesn’t understand either. She sounded pretty brave to Kara.

Mustering her own courage, Lena decides that now is the perfect time to come out to Kara as a witch. Kara’s face is hilarious, trying very hard not to scream like when she saw Alex’s Sentinel costume for the first time, forcing her face to stay curious when it’s clear that internally she is equal parts confused and excited. 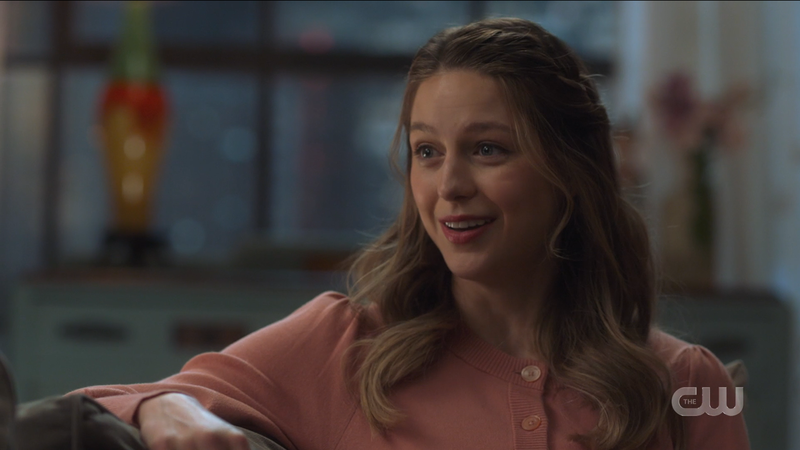 Me trying to act cool when someone says they started my favorite show(s).

Lena isn’t sure she’s ready to talk about it, but she wants to help, and more specifically, wants to help Kara. She wants to try to untether her from the imp. But Kara says she wants to stay tethered for now; she thinks she can use it to her advantage. She knows it could be dangerous, but she’s willing to take that risk if it could potentially help them. Lena looks in awe at the Kryptonian beside her and says again that she can’t believe the totem dared deny her. I’ll quote Lena once more so I’m not accused of exaggerating, but she says, “You are the epitome of courageous.” EPITOME. 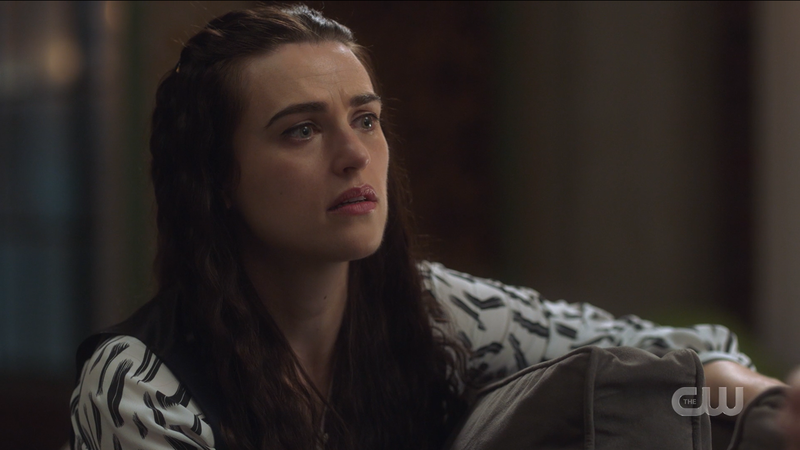 THIS SCENE BROKE ME. Time to give myself to the sea. Bye!

Kara gets another twinge and can feel Nyxly’s rage and determination. And it’s true, Nyxly is furious. They both had to face a gauntlet, why does Kara seem so…hopeful. And what’s the word? Gay? Happy. Same thing. Mitch says maybe Nyxly had to suffer more because she won and Nyxly decides to relish in that and refocus herself on finding the next totem.

The end! Next week, the totem of depravity? Love? We’ll find out! Together!