It’s cold today, but sunny. Socks Bobbi tried to murder Roomba this morning, more than once. The sneak attack from under the couch. The flying assassin attack from the top of the cat tree. That one resulted in Roomba shutting down and making a womp-womp noise before screeching error! error! error! until I put Socks away in the bedroom. They’re both asleep now, the cat and the robot; mortal, adorable enemies. 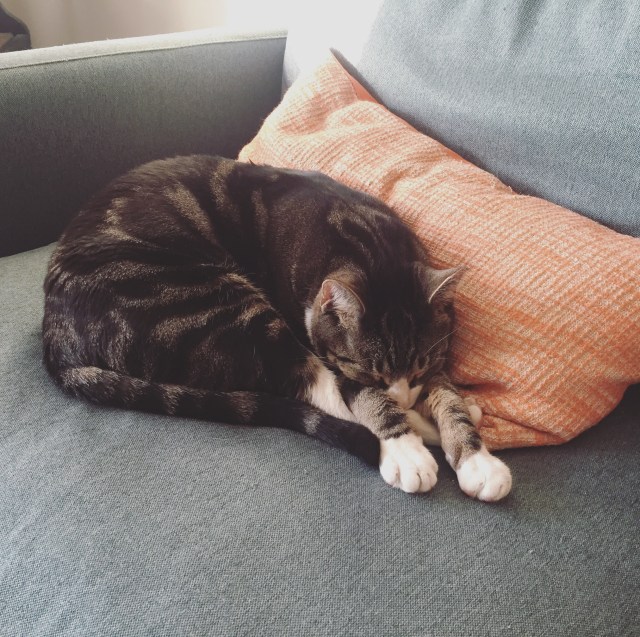 + The dictionary is at it again! Merriam-Webster offered a definition to Kellyanne Conway after she said feminism isn’t a word she’d use to describe herself because “I’m neither anti-male or pro-abortion.”

📈'Feminism' is defined as "the belief that men and women should have equal rights and opportunities." https://t.co/Zjf7CAPUjL

“I see Milo as this embodiment of the awfulness you see over the past few years with the general tilt of millennial conservatism,” said the teen. “It’s diverged from this traditional conservatism so much. You’ve seen it essentially become full of awfulness and all about attacking the left and not about actual principles. It has nothing to do with conservative ideology so much as it has with opposing the leftists, SJWs, and so on and so forth.”

+ Another day another LGBTQ dance party outside the White House. This one, which went down on Friday night, was held to celebrate trans youth in the wake of the Trump administration’s decision to destroy Obama’s Executive Order granting trans students the right to use public facilities that match their gender identities.

+ On Saturday, Slovenia began performing its first same-sex marriages. Gay couples still can’t adopt children together in Slovenia, but local activists say the central European country made a “a big step forward” with its decision to side with gay folks on the issue of marriage.

+ Marriage equality makes gay kids less likely to kill themselves. Amazing what being treated like a human will do for your mental health!

+ Trump’s bullshit brought Beyonce back to Facebook. She posted for the first time in a long time the day after Trump’s announcement to share her support for LGBTQ youth, and trans youth especially.

+ At a pre-Oscars rally on Friday, Jodie Foster spoke out against Donald Trump. Foster has always valued her privacy and shied away from using her celebrity to advocate for political causes, but she told the crowd gathered in Beverly Hills: “This year is a very different year. It’s time to show up. It’s a singular time in history. It’s a time to engage. And as the very, very dead Frederick Douglass once said, ‘Any time is a good time for illumination,’ and this is the time for illumination. I believe this time is filled with light … not darkness.”

+ Moonlight dominated the Independent Spirit Awards last night. It won every award it was nominated for, six in total. Joi McMillon became the first woman and the first Black person to win an Independent Spirit Award for editing. (She co-edited the film with Nat Sanders.) The Los Angeles Times profiled McMillon earlier this year; it’s a great read. She got her start as the assistant night editor on season three of The Surreal Life with Flavor Flav. The first thing she cut was an episode of Beauty and the Geek! She’s also the first Black woman to ever be nominated for an editing Oscar, an award category the Academy debuted in 1934.

+ Ellen gave away her biggest gift ever last week: 41 college scholarships to the senior class at Brooklyn’s Summit Academy.

+ Looks like the Disney Channel featured its first gay kiss! In a recent episode of Star Vs The Forces Of Evil, two dudes smooched along with all the straight couples at a concert. (The kissing happens at the 1:25-ish mark.) The Disney Channel didn’t actually even break out with a gay character at all until 2014, when a pair of lesbian moms showed up as supporting characters in one of the final episodes of Good Luck Charlie. Slow progress is better than no progress, but you oughta peek at Cartoon Network, Mickey Mouse.