Steven Universe, the Cartoon Network animated series created by Rebecca Sugar, is one of the best made and most creative children’s shows of all time, and also one of the most important. The animation, writing and voice acting are all brilliant beyond words (don’t worry, we’ve tried), but more than that, the show delivers on important, relevant, and rarely seen conversations and depictions of humanity, family and identity. Now, you can own a DVD of 12 episodes from the first two seasons titled “The Return.” 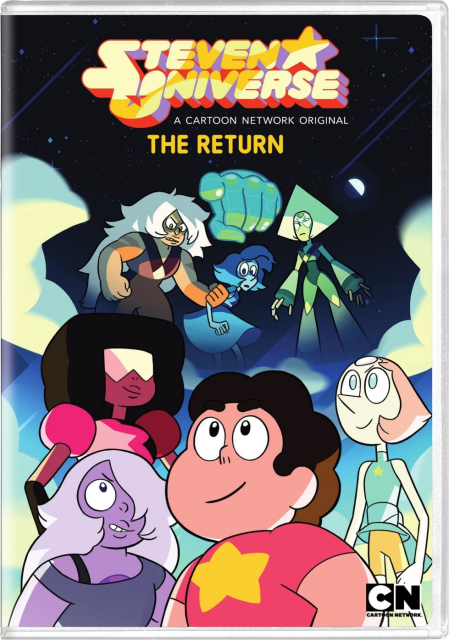 This collection includes many of the first and second season’s best and queerest episodes, including “Alone Together,” where we first meet Stevonnie; “Rose’s Scabbard,” in which Pearl’s love for Rose is explained; and the stunning “Jailbreak,” featuring “Stronger Than You,” a song from a children’s cartoon about the strength of gay love. Themes and messages about being yourself and the importance of love and having a family you can trust and who trusts you (no matter if that family is chosen or biological or made up of one son, one dad and a bunch of moms), abound in these episodes and it’s all handled so well. These episodes don’t need to hit us over the head with long speeches or confusing language to explain these things; it just uses cute songs, hilarious and touching dialogue, and gorgeous storytelling.

The other episodes included are “Mirror Gem,” “Ocean Gem,” “Space Race,” “Lion 3: Straight to Video,” “Warp Tour,” “The Message,” and the episode that gives the DVD it’s name, “The Return.” I love the way these episodes have been gathered together. Even if you haven’t seen most of the show, these specific episodes in this specific order will give you a great idea of what the show and the world are about. We meet Lapis Lazuli, Peridot and Malachite; we learn more about fusions; we learn details about what the Crystal Gems are and where they come from and we learn about what’s going on back on the Gem’s Homeworld. We also get to see a lot of backstory into Amethyst, Pearl, Garnet and Rose and learn about their relationships and how they got to be the Crystal Gems that we love. These episodes build a strong skeleton for the show to build itself on.

The other great thing about this collection is that each one of these episodes is rewatchable. Before I got my hands on the DVD, I’d already seen these episodes more than once, and I was happy to see each of them again. And even more so, as I was rewatching them, I was able to make so many new connections based on the new episodes I’ve seen. You can watch these episodes to learn, to laugh, to cry, to grow, and about a hundred other other things. It’s such a rich and deep show that has so many layers of comedy and story and character and art.

I want to talk for a minute about just how perfect the voice casting and acting on this show is. Regulars like Estelle as Garnet, Deedee Magno as Pearl, Michaela Dietz as Amethyst and Zach Callison as Steven are perfect in every single episode, adding so much dimension and life to their characters. And then when there are guest characters like the hilarious Shelby Rabara as Peridot and the perfectly paired Erica Luttrell and Charlyne Yi as Sapphire and Ruby, the show becomes even more amazing. In just one appearance as Stevonnie, AJ Michalka is able to so perfectly portray an androgynous young person exploring the world and experiencing all of it. It’s also important to note that nearly all of these actors are women of color, as are most of the others in the cast, meaning that kids of color will get to see and hear themselves represented where they don’t normally get to.

It’s so amazing that there exists a DVD like this that you can just out and buy. If you have a kid in your life, this is the one DVD I’d suggest you buy so far this year. Not only will you be giving them one of the most beautiful, brilliant, creative and well-written cartoons of all time, but also a show that addresses topics like gender, sexuality and identity in a way that makes more sense than 90% of adult shows. Steven Universe is so important. It’s changing the world and saving lives and helping people grow up and helping others realize that they don’t have to change who they are.

Imagine being a child today, and you come home from another confusing day at school and your parents have bought this DVD for you. Or, you save up your own money because your parents aren’t supportive and you get your hands on this DVD. You start watching and you see Stevonnie, an androgynous character made up of a boy and girl who fused together, struggling to feel comfortable in their skin and then ultimately finding their comfort level. You watch a family made up of flawed and broken people who accept, love and affirm one another. You watch two space rocks, Ruby and Sapphire, embrace and kiss and then sing a song about how they’re literally made of love. Imagine you’re a child today and you’re watching Steven Universe: The Return and you finally see yourself not only represented on a show that’s specifically made for you, but treated with respect, love and reverence — and then imagine that you’re finally able feel those things about yourself.