Last year at New York Comic Con, I walked up to writer/artist Terry Moore‘s booth — press badge around my neck — and burst into tears. 36 years old, working at comic con (like as my actual job), I’d sought out him out to shake his hand and tell him in person how much his long-running series, Strangers in Paradise, had meant to me. I say “in person” because we’d emailed dozens of times before that day at NYCC when I sobbed onto a copy of his 2016 sketchbook and thrust ten dollars into his wife’s hand to cover the cost. I’d interviewed him for various websites. He’d published one of my fan letters in the back of one of his books. All I wanted to do was smile at his face with my face and reiterate my thanks for drawing two women in love. I’d interviewed Wonder Woman herself, Lynda Carter, on the GLAAD Awards red carpet just a few months earlier. How hard could it be to walk by and high five Terry Moore?

Very hard, actually. Impossible. Because it wasn’t the 36-year-old me who waltzed up to his table. I wasn’t a senior editor at the world’s most popular queer lady website, thriving in New York City with my girlfriend of six years. I was younger. Much younger. I was 23 or 24 and all my friends were marrying men and I couldn’t make myself follow their lead, no matter how many times my Baptist pastor urged me to. I didn’t know what was wrong with me, but it was something, and I was scared and I was alone and I hated my job and I hated myself. I had no plans for my future because I couldn’t imagine a future because I’d never seen one (in real life or on TV or in a movie or in a book) that made sense to me.

I was 23 or 24, standing in Galactic Quest comic book shop in Buford, GA, when the owner, Kyle, pressed Strangers in Paradise into my hand. He asked me what kind of books I liked to read and I blurted out “Wuthering Heights” for some reason, and he laughed and told me to take the first SiP trade paperback. He said if I liked it I could come back and pay for it later, and if I didn’t, I could just pass it along to someone else who had a thing for female protagonists who love so deeply the weather changes with their moods. It was a good Brontë joke and when I laughed he flipped the book over and showed me the cast of characters on the back cover: “This is Katchoo,” he said. “She’s in love with her best friend, Francine; this is her. She thinks she’s in love with Freddie, but she’s just scared to admit she’s in love with Katchoo too.” 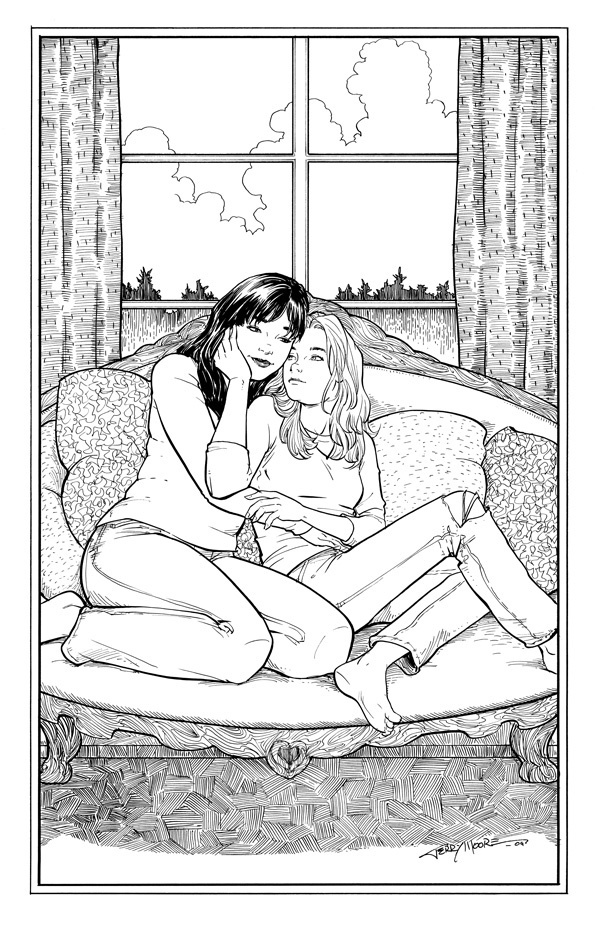 A post-SIP sketch by Terry Moore.

I shoved the book back at Kyle and told him no thank you. My church had been warning me about stuff like this my whole life. You read a book about homosexuals or, say, a boy wizard, and you might get tricked into feeling sympathetic towards them and you might forget how they’re pawns of Satan and you might get dragged right into their lifestyle. Kyle insisted and I relented. It was free and he was so eager to share a comic book he loved.

It turns out my church was right: Ten pages into Strangers in Paradise I realized what Jesus was talking about when he promised that when I found the truth, I’d be set free. Katchoo loved Francine, and it was perfect and heart-wrenching and sweet and sexy and fraught and easy and normal. So normal. Loving another woman — loving another woman — was normal, and I was free. 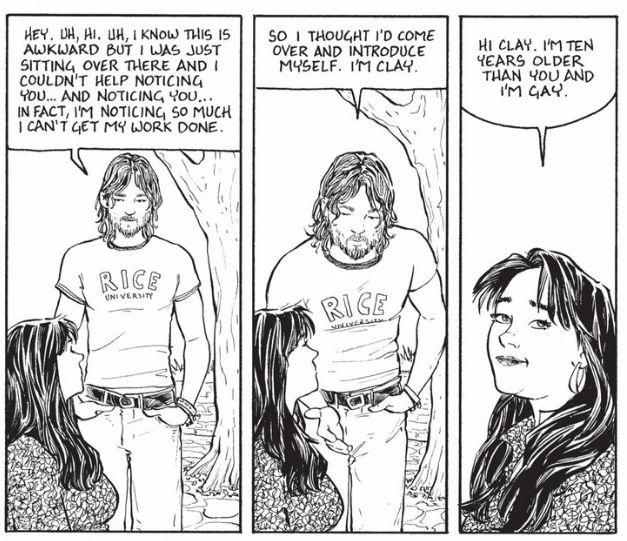 Francine Peters: The only woman who stayed in the closet longer than I did. She finally said she was gay in Issue #88.

Francine loved Katchoo back; that was obvious before the end of the first trade, but it took 106 issues for them to finally find their way to each other for good and forever. Strangers in Paradise is a lot of things. It’s a love story, for sure. It’s a story about chosen family. It’s a noir mystery and a mob drama and a ’90s sitcom and an art history lesson and a love letter to music and complicated rumination on identity. I used to wait by the mailbox for each new issue to arrive. I’d devour it and then start over at the very beginning and read all the way through again until it was time for the next issue.

I’ve been thinking about Strangers in Paradise these last few days because of something Terry Moore said in the Treasury Edition a long time ago. He started the series in 1993 and had always planned for Francine and Katchoo’s story to have a tragic ending. He thought it’d be bold, and poetic. But September 11 changed the way he thought about story, about his work in the world, and he realized there were enough sad and terrible endings for real people and fictional characters, especially queer ones, and he resolved in the following months to ultimately give his lesbian and bisexual female leads the send-off fans wanted, the send-off they deserved. 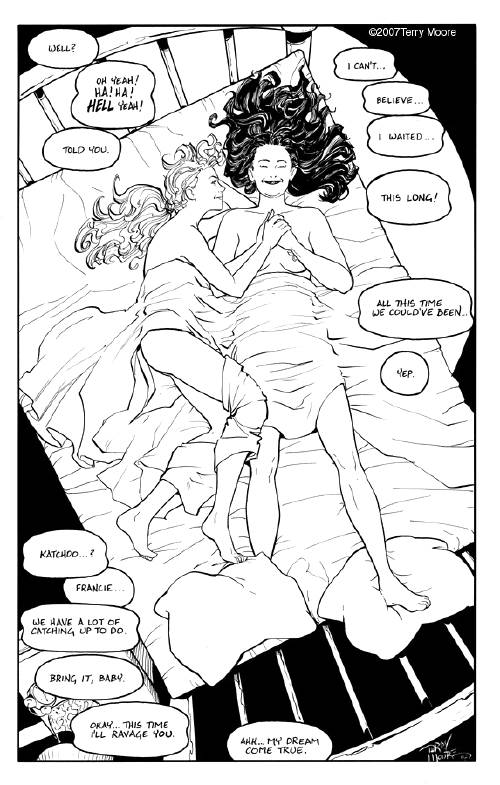 My dream come true, too.

It’s no wonder that I reached for SiP yesterday in the wake of the Orlando attack. It’s a well-worn comfort, a story that tugged me out of the closet and sent me off in pursuit of my dreams, a story that has offered me distraction and reassurance for years.

Over a decade ago, Terry Moore realized what so many storytellers before and after him have been too obtuse to see — that happy endings for gay people aren’t cliche. They’re not the norm. They’re rare and remarkable and we hold them in our hearts forever. I never knew a future until Galactic Quest Kyle wrapped my hands around Strangers in Paradise.

Francine and Katchoo lived happily ever after.

Francine and Katchoo lived happily ever after.

And so can you.