All right, Trekkie’s and N00bs, are you ready to watch along? This episode opens on the Enterprise Crew pulling a “Google Maps.” Essentially, they’re driving around and snapping photos of outer space to create accurate star maps. With the rate things are going, I wouldn’t be surprised if Google ends up in charge of this task once we’ve got warp technology. 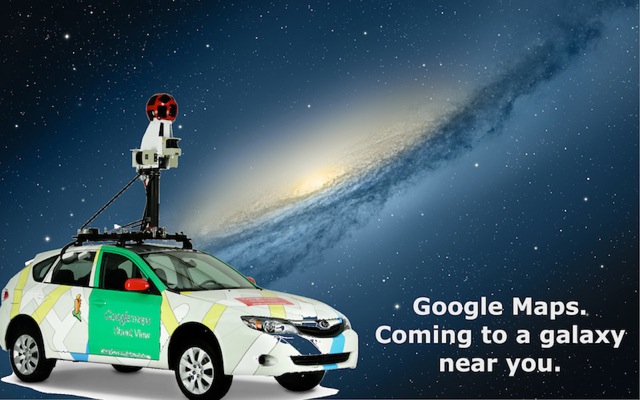 The irony here is the Apple wallpaper.

While Spock snaps pictures of the stars, the crew detects a large object hurtling toward them at an alarming speed. It looks like a piece from a Rubik’s Cube disengaged and flew into space after this epic nerd competition:

The entire crew is hella confused by this object, as you can tell by their expressions. 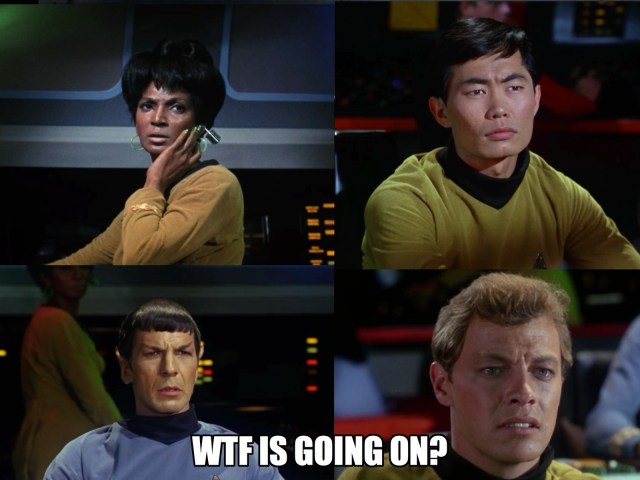 Wondering where the captain is? Well he’s busy getting a physical in Dick Bay with Dr. Bones. Yep. 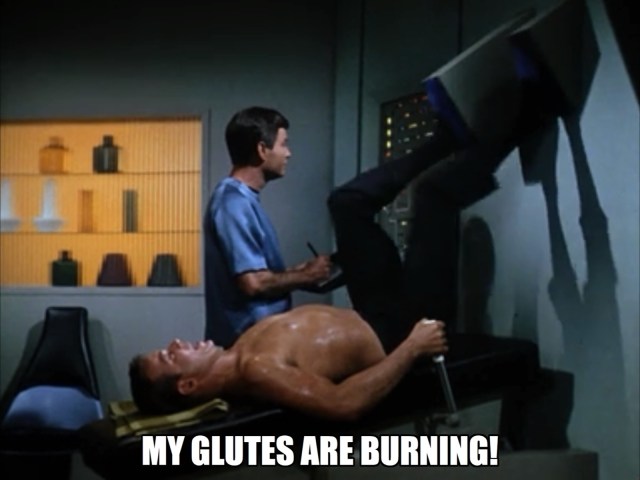 Of course the first thing Kirk does is jump onto video chat with Spock, to show off his muscles. 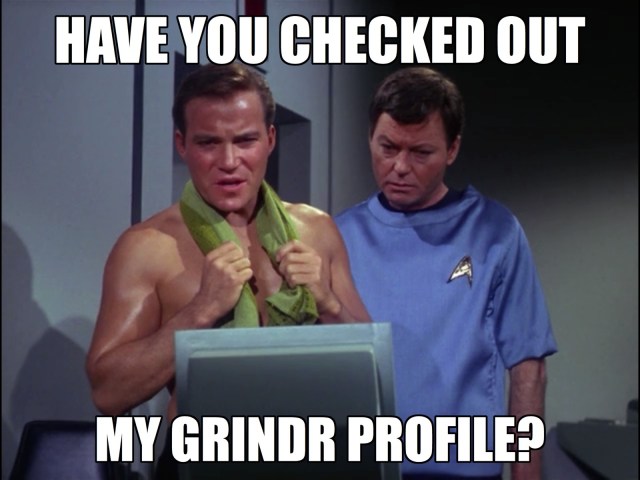 Spock is Smart and Sassy

During the Rubik’s Cube approach, the chief navigator, Dave Bailey, started having a freakout on the deck. Looks like work stress finally got to him. He explains to Spock, “Raising my voice back there doesn’t mean I was scared or couldn’t do my job. It means I happen to have a thing called an adrenaline gland.”

Spock plays the tiniest violin for Bailey and replies, “It does sound most inconvenient, however. Have you considered having it removed?” 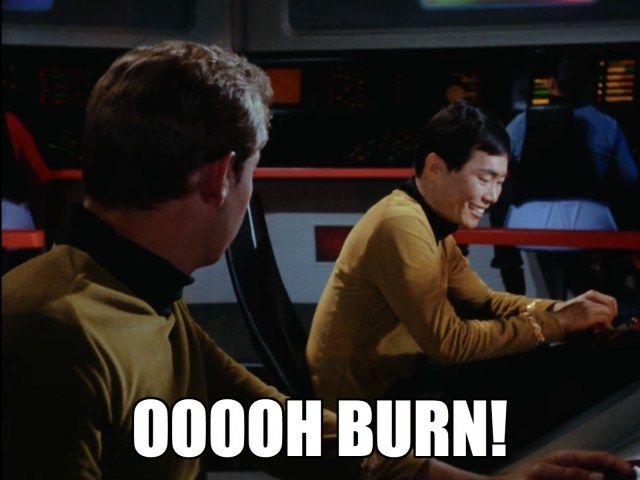 “Try to cross brains with Spock, he’ll cut you to pieces every time.” Sulu’s still got swords on his mind. 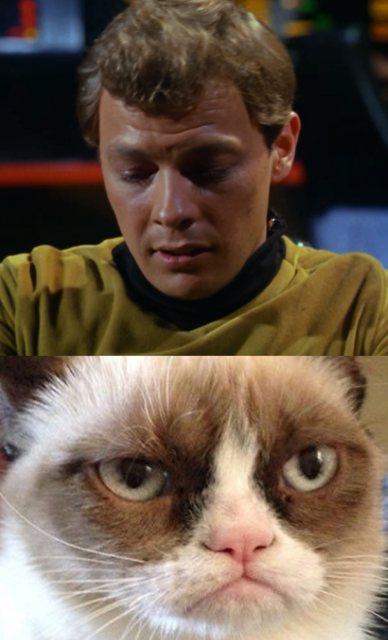 Of course, this lack of sympathy turns Bailey into a massive Grumpy Cat.

Turns out that the Rubik’s Cube piece is a whopping 11,000 tons, and it won’t quit following them around. Here are Spock’s theories about what the object could be: 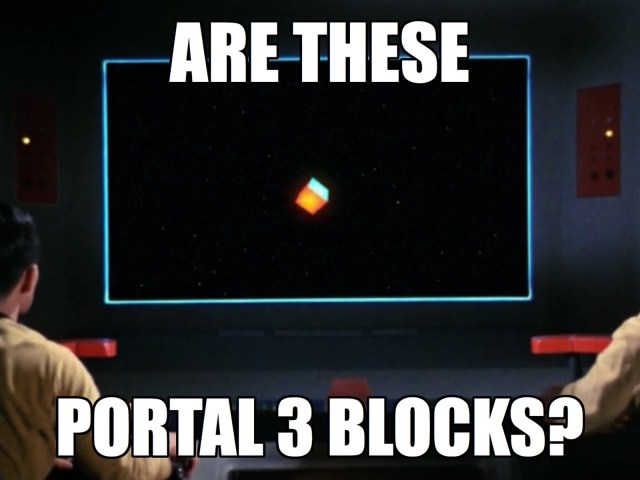 Spock discovers that the cube is hitting them with a low dose of radiation. Kirk decides that they need to act and test the boundaries of this Rubik’s Cube chunk. They increase their speed from low to warp, and the scary block keeps pace. It’s quite terrifying to hear Spock announce: “Radiation passing the tolerance level, entering lethal zone.”

The Enterprise blasts the cube with its weapons, obliterating it. It’s impressive to see how much the crew trusts Captain Kirk during this tense situation.

Booze and the Struggle of Women

Bones pours Kirk a celebratory drink, but reprimands Kirk for promoting Bailey. The kid seems too green, caving under the pressure and hesitating too much during the Rubik’s Cube chase. We don’t get far into this conversation before Yeoman Rand enters with Kirk’s food. He complains about his salad, and shiiieet, Yeoman Rand never asked to get stuck on kitchen duty. 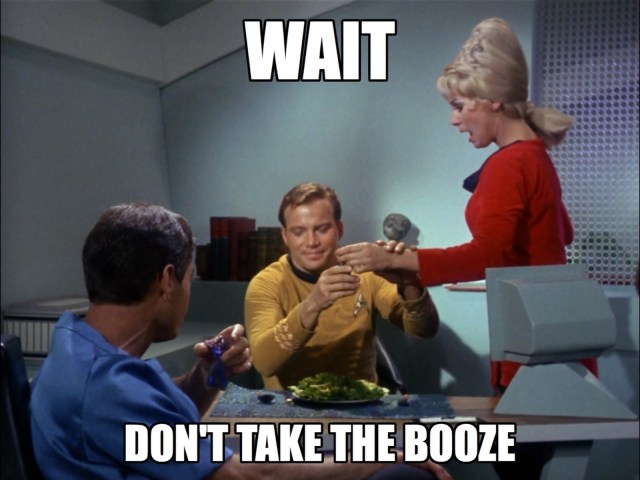 Instead of being a doosh, why don’t you make your own fucken lunch, Kirk?

Turns out Bones is responsible for the healthy menu, since Kirk’s a few pounds overweight.

Kirk turns around and gripes about Rand being a woman.

“When I get my hands on the HQ genius who assigned me a female yeoman.”

Bones replies, “Whats the matter Jim, don’t you trust yourself?”

And Kirk gets even doosh-ier, proclaiming, “I’ve already got a female to worry about! Her name’s the Enterprise!”

Poor Rand continues to serve as an example of the sexism women suffer in future societies. I continue to headdesk every time this bullshit happens.

The Disco Ball of Doom

Didn’t you get the memo about threatening shapes? This time, it’s a sphere! 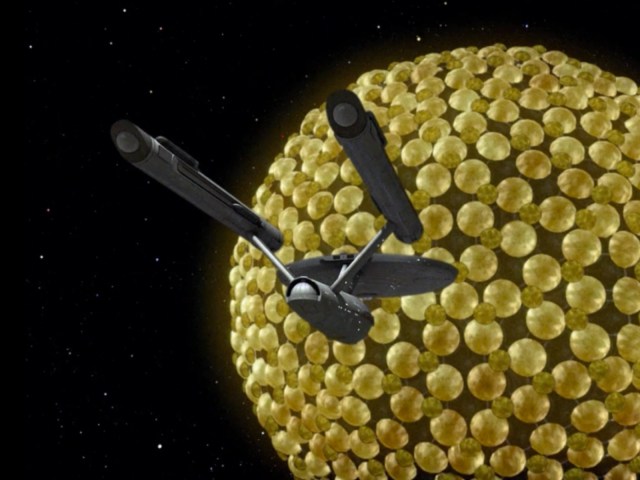 Someone lost their bling in space.

Balok from the flagship, Fesarious, announces that the Enterprise will be scanned and destroyed, since they blew up their Rubik’s Cube probe.

Spock then utters one of the the gayest sentences I’ve heard all season, as the Enterprise quakes. 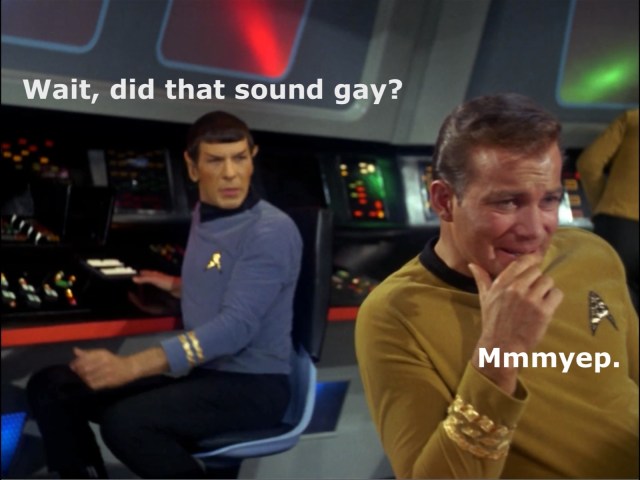 Immature lulz were had.

Balok tells the crew that they only have 10 more minutes to live, and that they should start praying. “We make an assumption that you have a deity or deities or some such beliefs which comfort you.” Interesting! Come to think of it, there’s been little mention of religion in TOS.

Someone needs to get Bailey outta there, because he’s having a full blown panic attack. He jumps out of his chair, screaming, “What are you, robots? Wind up toy soldiers? Don’t you know when you’re dying?” 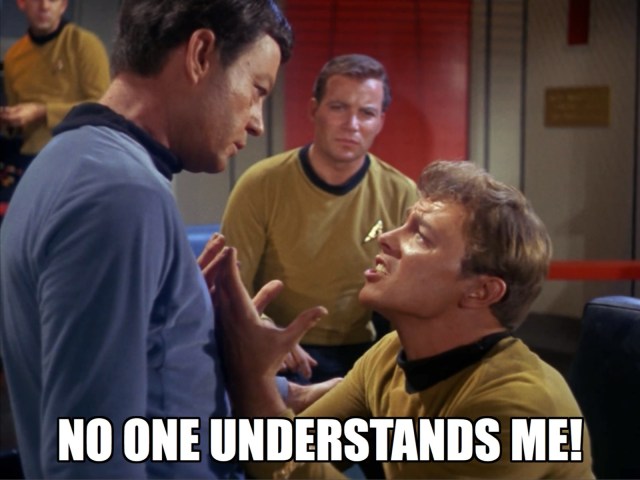 Poor dude. But seriously, get him off the bridge.

The Captain finally orders Bailey out to sick bay, and Bones totally blames Kirk for putting an inexperienced crew member in such as stressful position.

Well guess what Rand’s been up to? She got bored and heated up some coffee with her hand phaser, and serves it to the crew as a sort of last-minute comfort. That is freakin’ adorable. 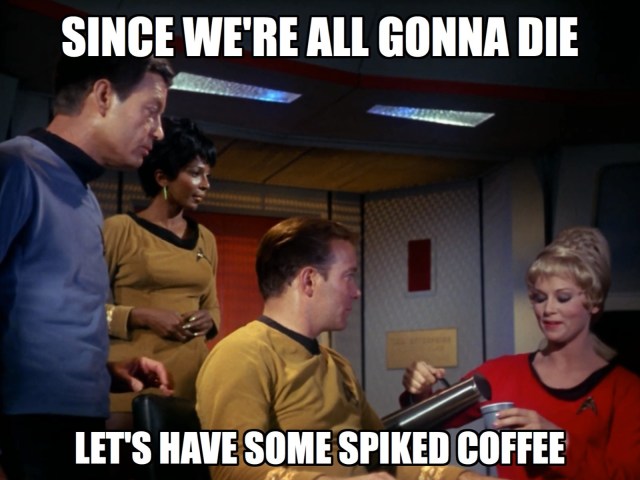 For that alert and buzzed feeling.

Kirk suddenly has a creative brain-fart. Spock’s been comparing this entire situation to chess, but maybe they need to approach this emergency like a poker game! I wonder if he’s gonna order the crew to strip? 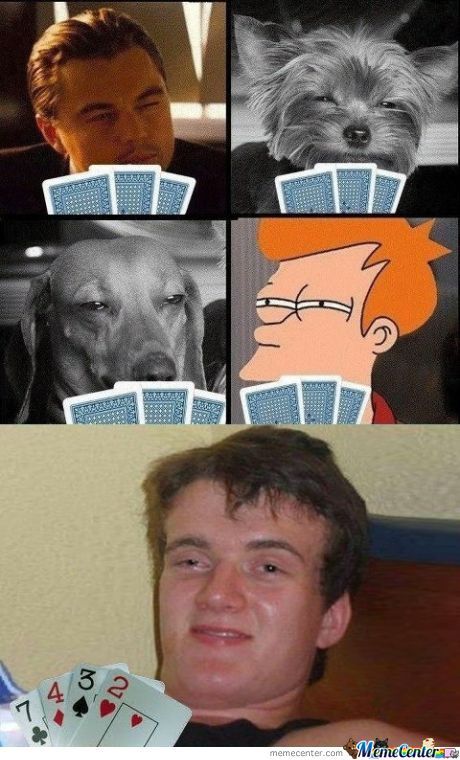 This rando plan is the best!

Kirk explains that an (imaginary) substance called Corbomite is built into all Starfleet ships, and it will reflect destructive energy back at the attacker, destroying them.

Kirk busts out his EPIC BLUFF and says, “Death has little meaning to us. If it has none to you, then attack us now. We grow annoyed at your foolishness.” Daaaaayyyymnnn! 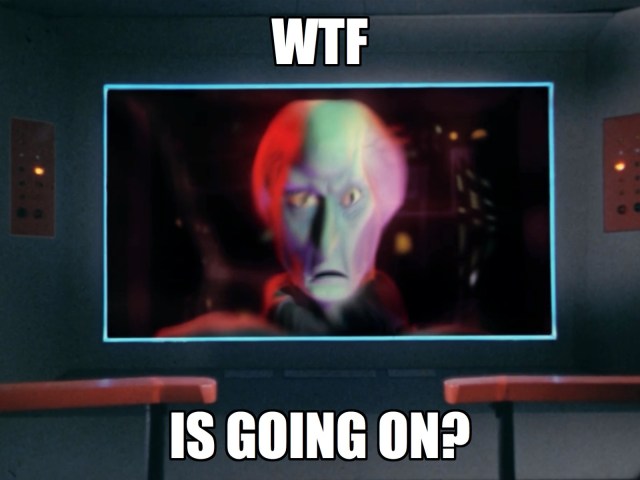 Turns out the bluff worked, because the Enterprise doesn’t get blasted away. 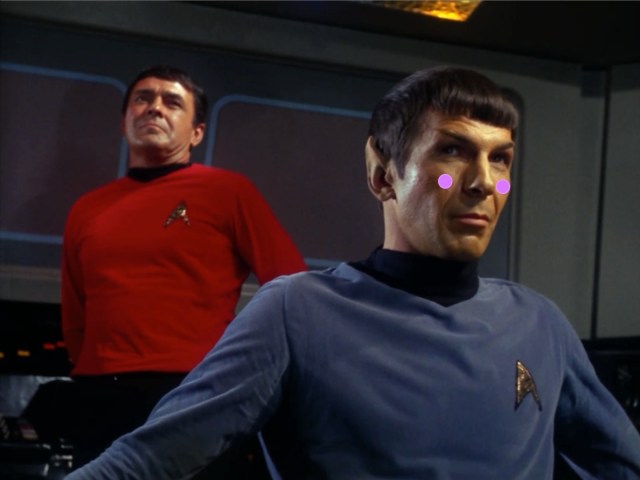 Spock is super impressed and about to drop his panties. Scotty’s just happy to be alive.

Balok’s not done with them yet! He deploys a mini space craft, which kinda looks like a cluster of Honey Nut Cheerios. It drags the Enterprise away with a tractor beam. Balok claims that he is taking them to a prison planet.

Kirk ain’t having that. He orders the crew to resist the tractor beam, which is draining power aboard the Honey Nut Cheerios. The Enterprise shears away from the tractor beam, and Balok is stuck drifting in space, with a blown engine.

Kirk reminds the crew that their mission is “to seek out and contact alien life.” In this noble effort, he decides to give Bailey a second chance. “The face of the unknown. I think I owe you a look at it.”

Kirk tells his boyfriend Spock to stay on board, in case it’s a trap. Well, isn’t that what Spock usually does anyway?

“Bend low, gentleman!” yells Scotty, as he gets ready to beam ’em over. “It’s pretty cramped in there!” No homo! 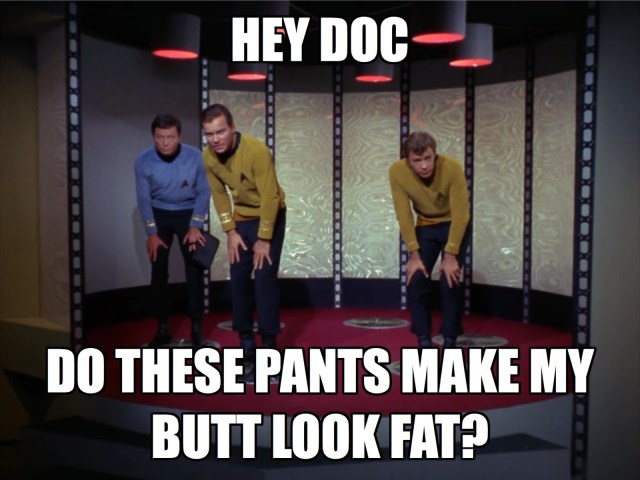 Kirk’s been feeling sensitive ever since Bones prescribed that salad diet.

They arrive, and it turns out that the Face of the Unknown is just a dummy! See Bailey, new lifeforms aren’t so scary after all!

Oh wait. This is Balok, who looks like a scary Teletubby holding a traffic light. 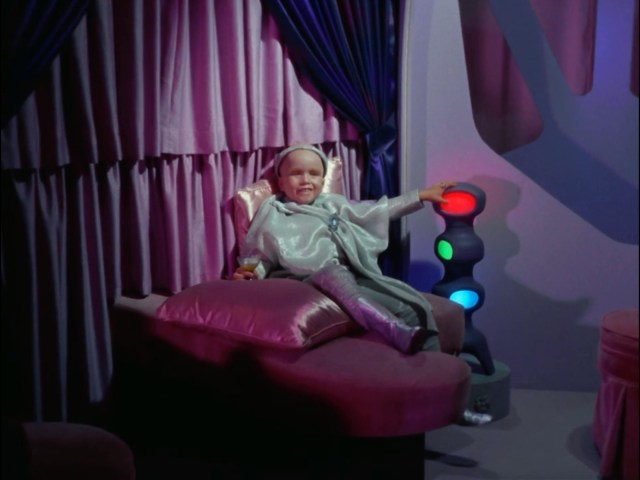 What even is life right now.

Balok reveals that he’s lonely, and that he was just playing a game with the crew of the Enterprise. Hahahah! And that he totally wants them to be friends and exchange cultural ideas.

He offers them some Screwdrivers as a peace offering for, ya know, trying to kill them all. 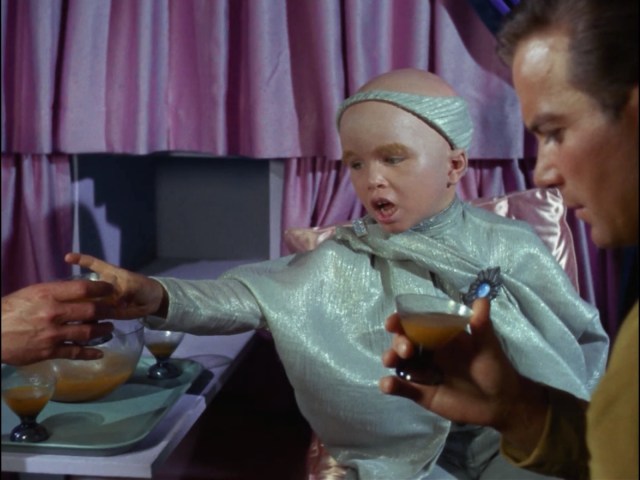 It’s my own special recipe!

The most ridiculous part is that Kirk and his crew DRINK IT. At this point, I started wondering if they were gonna wake up in a bathtub full of ice with organs missing.

Kirk loves Balok’s idea of cultural sharing, and Bailey volunteers to stay behind to keep Balok company. Seriously?! Were the drinks THAT good? At this point, we realize that this was all a complicated lead up so that Bailey could face his fears.

Kirk’s thrilled that he’ll “get a better officer in return,” but I think that he just secretly wants Bailey off the ship.

Kirk and Balok shake hands to seal the trade, and this bizarre, confusing episode ends. 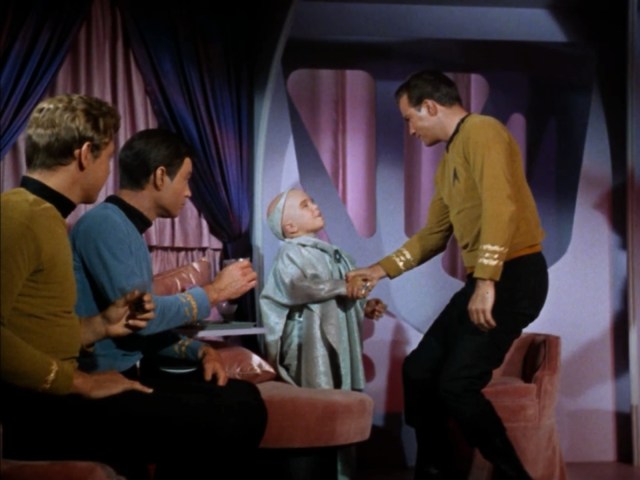 Once the Captain leaves, Bailey’s gonna discover all sorts of nightmares on the Fesarius.

I wonder if we’ll see Bailey and Balok ever again.

And this episode just brings us back to that look of confusion: 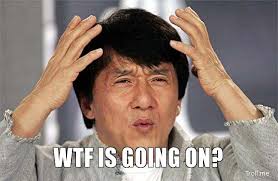