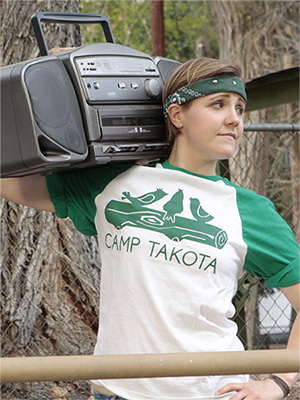 Howdy, campers! Friday was a big day for your imaginary Valentine slash A-Camp veteran slash My Drunk Kitchen sensation Hannah Hart because GUESS WHAT: she’s in a movie! Starring in Camp Takota alongside fellow YouTubers Grace Helbig and Mamrie Hart, Hannah and the gang made a heck of a movie about three childhood friends at summer camp. From the official movie website:

With her personal and professional life in shambles, Elise (Grace Helbig) ends up having to take a job as a counselor at her old summer camp. There, she reunites with two estranged friends (Hannah Hart, Mamrie Hart) who attended camp and never left. When the future of the camp is put in jeopardy, the three friends must band together to save it, changing the course of their lives forever.

Hannah even plays a lesbian! Check that out. Queer representation. A girl after my own heart.

Look at this extended trailer!

You can watch the full movie right now, right this second over on the official Camp Takota website! In addition to the full-length movie, there’s also making-of documentary available, which is pretty cool in its own right, given that this movie was made and released without a major studio. It’s always interesting to see how movies with multiple women in lead roles are received, and because Camp Takota is being released directly to the internet (aka the three stars’ main audience), it will be even more interesting to see how well it does. Real talk, this movie is really good and funny in ways that I wasn’t expecting (although a few jokes rubbed me the wrong way), and I mean, besides the fact that it’s always a good idea to support queer people in film, I really think you’re going to like it a lot.