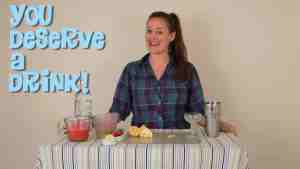 Happy weekend! How was your week? Was it rough? Yeah? You deserve a drink. Fortunately for everyone on the planet, there’s a YouTube channel for that.

A three-minute rundown of pop culture and alcohol recipes, “You Deserve A Drink” is a weekly webshow hosted by Mamrie Hart (presumably no relation to my/everyone’s love interest Hannah Hart, but like, weird, right?). Edited by Grace Helbig of “Daily Grace,” the show is shrill, over-the-top and about seven kinds of awesome. Each episode, Mamrie picks a prominent figure from entertainment news and teaches you how to make a special drink in their honor, like Charlie Sheen’s Tiger Blood Gimlet or Big Boi’s Hey Yacht, in addition to celebrating alcohol-idays like Mother’s Day. My favorite video is Harry Potter’s Flaming Butterbeer because I want to punch her every time I hear her make a pun on “quidditch,” but it’s just so clever, you know?

My friends who have made these drinks said that they’re really good, especially if you want to get really drunk really fast. The show even has “a built in drinking game”: take a drink for every horrible pun she makes. You guys, she averages about five puns per minute, depending on the video. I mean, really. It’s like she does this just for you.