Playwright Shirlene Holmes calls theater “a place to do divine things.” In that same vein, Holmes, who has authored the work A Lady and A Woman, strongly believes in the theater’s capacity to produce social change. During Brown University’s “Black Lavender Experience,” a week long festival that began on April 7th and ended on April 12th, Black LGBTQ artists gathered to perform and discuss their work with students, residents, and festival participants in Providence, Rhode Island. Holmes and a number of queer Black playwrights and filmmakers took the time to sit down with students and talked about the divine nature of their writing for marginalized communities.

For Yoruba Richen, the filmmaker and producer behind the documentary The New Black, social justice and creativity are ingrained within her. From her academic pursuits to her creative expression, Richen’s work exists to engage and impact her audience. Although she began her performance work in the theater, she found film work while she was studying urban planning in graduate school. Film provided her with an outlet, not only to communicate her own experiences or to tell stories she found interesting, but also to speak with marginalized communities and seek justice for those whose stories often go unheard. She explained that film requires her to think about how people will use and receive her work, demonstrating how as a queer Black artist, she has used work like The New Black to serve various communities that she belongs to. For artists like Richen, community uplift does not only complement the pieces they produce, but rather is very inherent to their work.

Likewise Dr. Charles Mulekwa views theatrical work as an opportunity to create new knowledge, benefiting marginalized communities by telling stories that have not been told at all. For example, the Ugandan playwright reflected on a controversial piece he had written in his home country. He described how in spite of some of the public criticisms that insisted that Mulekwa wrote about a taboo topic, privately some people would offer him perspectives that he had not realized before. Mulekwa asserts that a part of a writer’s obligation — if that writer wants to write to uplift oppressed communities or groups — is an understanding that the writer must be willing to take risks and even to fail. The objections and criticisms Mulekwa faced are all a part of a playwright’s experience. Mulekwa encourages young writers to keep perspective and to constantly legitimize themselves. “You have as much right as any [“famous”] writer to write a play,” he maintained, remembering his own intimidation when he read works by people now hailed as classical writers. He believes that we all have a story to tell.

It was fascinating for me to hear how many of these artists connected the community building and social justice efforts of their plays and films to the spiritual realm. Sharon Bridgforth, author of River See, the bull-jean stories, and dyke/warrior-prayers, uses her work to “serve the ancestors, who are also the future.” She describes her spiritual practice with respect to playwriting as a “theatrical jazz aesthetic” (which, in case y’all were wondering who came up with that bomb ass term, apparently traces back to Aishah Rahman). Bridgforth broke it down for us, explaining that this theatrical jazz aesthetic means that in her writing and acting, she focuses on working as a collective or as a gathering with her cast and audience, while being present (or serving) as she performs or writes the performance. (It’s kinda like what jazz musicians do when they’re jamming out.) Her work is beautiful, fluid, and incorporates a mysticism that somehow speaks to a multitude of experiences while never explicitly saying whose experiences its meant to represent. 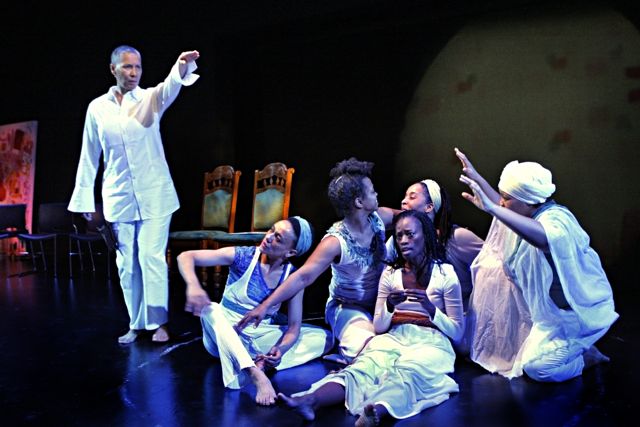 You are more than just yourself when you write, these Black LGBTQ artists seemed to agree. Holmes summarized her feelings about writing for her various communities, stating, “It’s not your role to write something and keep it [for yourself]”. As a daily practice, she plugs herself into the Divine, which for Holmes is the god of her understanding. She advises young Black, LGBTQ and Black LGBTQ writers to find their own divinity as they seek to use their writing to not only reflect their personal experiences, but also to reach out and touch the experiences of others. “We make simplicity so deep when it can just be simple,” Holmes explained about divinity seeking. “Plugging into the divine can be drinking water, calling an ancestor’s name, … [it] can even be admitting that you don’t want to write today.”

These Black LGBTQ artists dedicate their work to sharing stories and also to engaging with various communities, whether that engagement means establishing a common ground for mutual understanding or airing out the “dirty laundry” that hinders a group from moving forward. They politicize their experiences and breathe life into the tragedies, victories, sorrows, and quotidian experiences of people of color and LGBTQ communities. Although none of these artists claim to speak the realities of all members of the communities or groups they belong to, they work through the divine and sacred spaces they create within themselves and their work to affect social change and uplift.