Before we launch into this recap, I have to let you folks know something: I’ll be wrapping up Star Trek N00b next week with episode 20.

Don’t draw your phasers just yet! I’m not really a complete N00b to Star Trek anymore. After analyzing the minute details of each episode, I’m able to hold my own in Star Trek conversations, laugh at in-jokes, and appreciate the historical impacts of this amazing series.

Friends, I’ve gained new geek skills, kinda like a Pokemon in its intermediate stage of evolution. 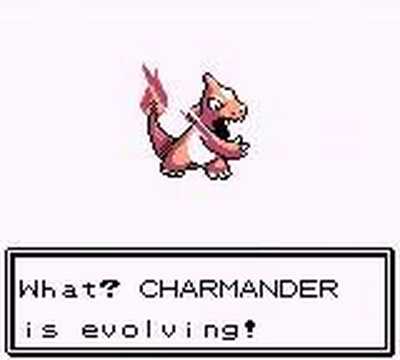 Be careful, don’t tap the B button!

Instead of working on N00b, I’ll be moving onto even bigger nerdy pursuits with Autostraddle, like more Queer Your Tech articles and other nerdy projects with our Captain of the Geekery Enterprise, Ali Osworth. I’ll absolutely keep watching TOS, so feel free to add me on Twitter or Pinterest to keep up with my observations as I slowly evolve into full-fledged Trekkie (or *cough* Trekker). I’ve also been dipping my toes into Next Gen (LOVE Data!).

Thank you to everyone who has supported me during my n00bish exploration, and I’ll catch ya next week for one last hoorah!

Now onto the recap… and as always, you can watch along with me!

So the past few episodes have focused on Spock‘s overwhelming rationalism, but what about good ol’ human brutality?

Kirk goes on a war rampage in this episode, and we get to see how people can eff up too. 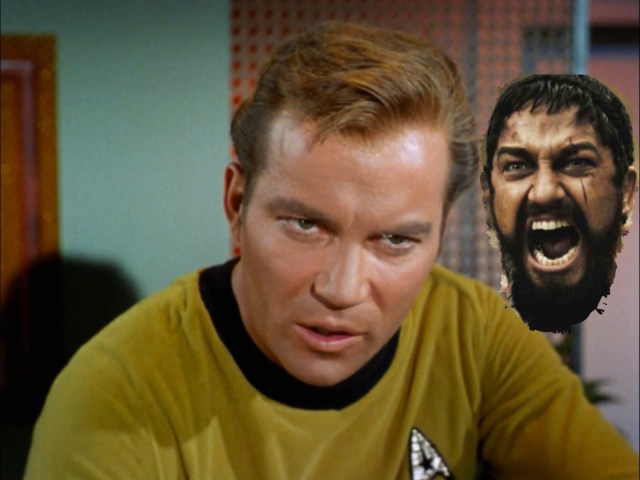 BATTLE! (Just so you know how out of touch I am with this franchise, I kept searching for “Leonidas from 500” until I realized that was the wrong number.)

On to the blood and guts!

Kirk and McCoy are super excited for dinner — they plan on chilling with Commodore Travers on the far-off outpost of Cestus III. McCoy’s hankering for rib eye steak and exotic booze, which leads to this great exchange.

Spock: You’re a sensualist.
Bones: You bet your pointed ears I am! 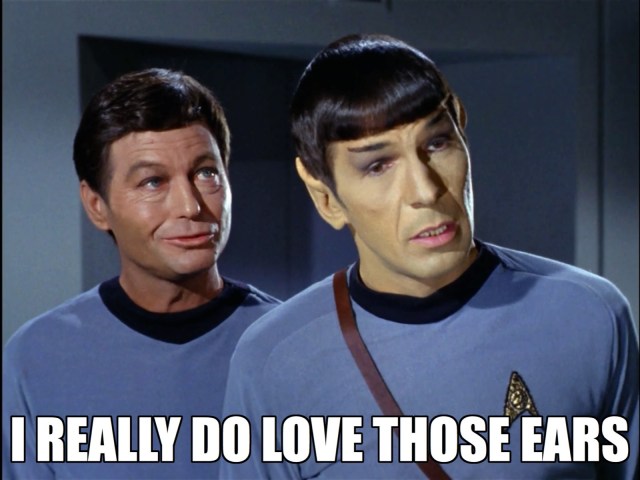 Unfortunately McCoy’s culinary dreams come crashing down around him. They beam down to Cestus III to find it a destroyed wasteland. 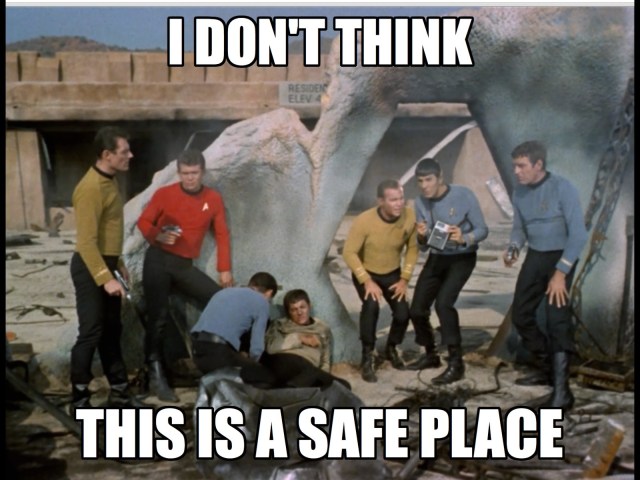 So who REALLY invited them down to the planet?

A surprise vessel appears in space, and Sulu instantly puts up defensive shields. Now the landing party can’t beam up.

Kirk orders Sulu to slam the attacker with phasers and photon torpedoes. He’s so controlled during this scene — it’s super impressive! 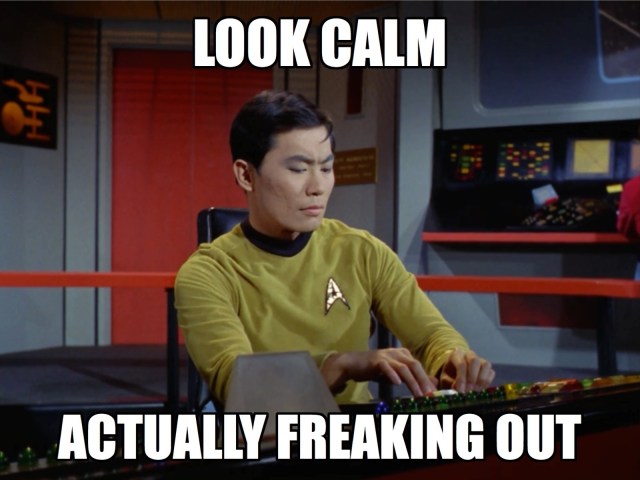 Kirk orders Sulu to Warp away. His priority is to protect the ship.

Even though this is really hard for Sulu to do, he follows his captain’s orders and flies away.

A Red Shirt dies, but really, that’s no surprise. 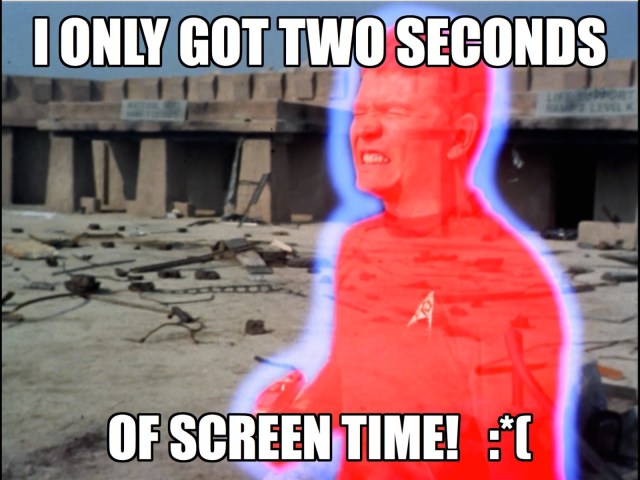 Kirk and Spock get sick of getting bombed, so they roll around across a field until they find a canon. 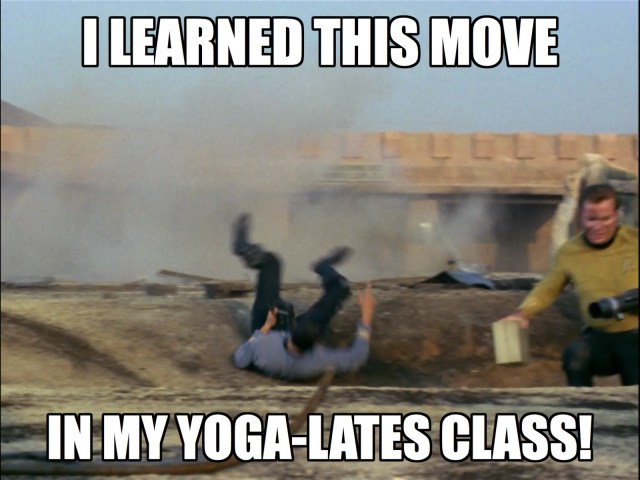 They guess that the enemy is hiding behind a bunch of rocks. And they guess right! After firing, the attackers drop their shields and rush to help their fallen soldiers (who we still haven’t actually seen).

Sulu rushes in and beams up the landing party, breathing a sigh of relief that his boyfriend Bones is OK.

Once he gets back to the Enterprise, Kirk is hella pissed. He gets this weird gleam in his eye.

He speculates that the attackers must have on thing on their minds: invasion. Spock warns that this kind of assumption is dangerous, always the voice of reason.

Spock: The regard for sentient life –
Kirk: There’s no time for that! Out here, we’re the only policemen around. 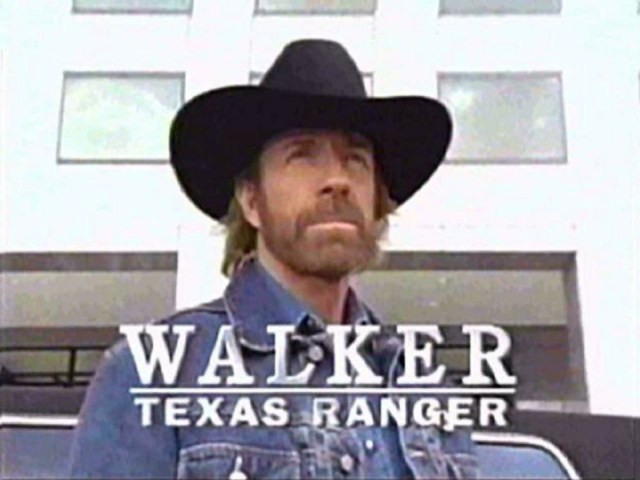 Cuz the eyes of a ranger are upon youuuuu.

Yikes. Where’s your head at, Kirk?

The Metron: Smarter Than You

Kirk is powertrippin’, and he chases the attacking ship all around space. Scotty‘s pissed because they’re gonna burn out the engines. Because, you know — it’s happened before.

But suddenly, both ships get stuck in some kind of sticky mouse trap in space. 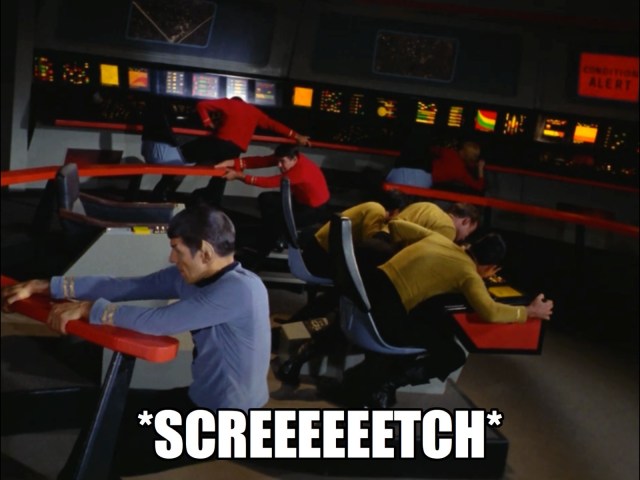 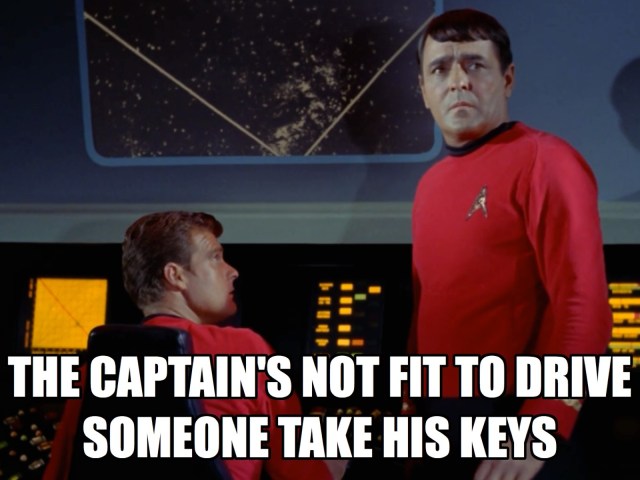 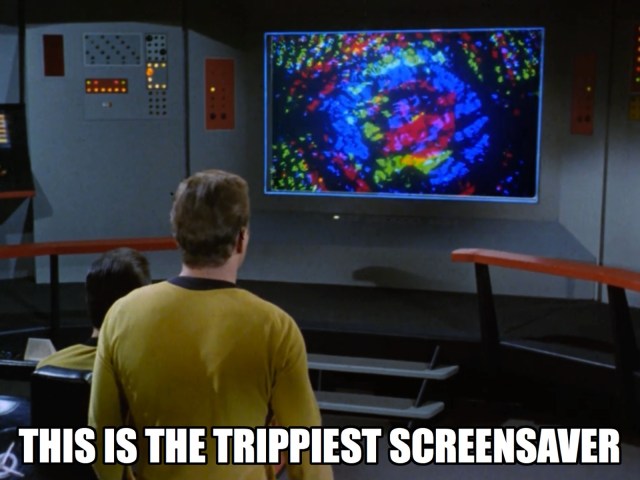 A voice comes on over the intercom — they introduce themselves as the “Metron.” I wonder if they’re related to the Metatron? 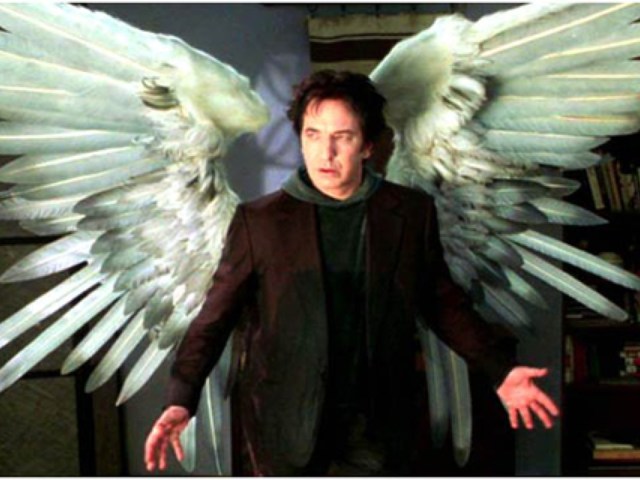 I have a feeling that Alan Rickman’s voice could get them outta trouble any day.

Turns out the Metron are an uber-intelligent species, and they’re annoyed by these angry dudes flying all over the place trying to kill each other. They propose a solution: Kirk and Gorn captain can fight to the death while isolated on a planet. The winner’s crew gets to live — the loser’s crew gets squished. Then *POOF!* Kirk disappears and the dance off begins!

So let’s talk about the Gorn. It looks like their costume department dug out the live-action outfit for Reptar from Rugrats. Yeahhhhh. 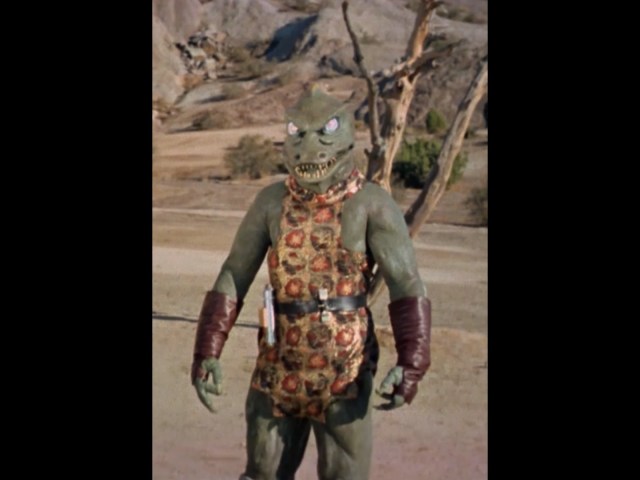 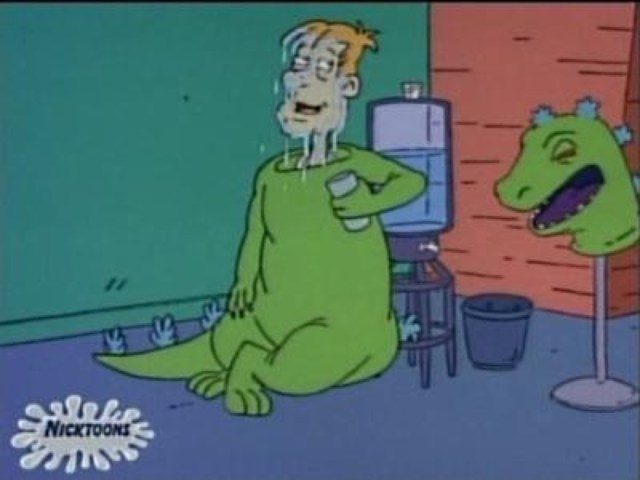 I hear the soundtrack for Reptar on Ice is hella good.

Gorn is super slow, but boy is he strong. They try to start the fight with good sportsmanship and a little smooch. 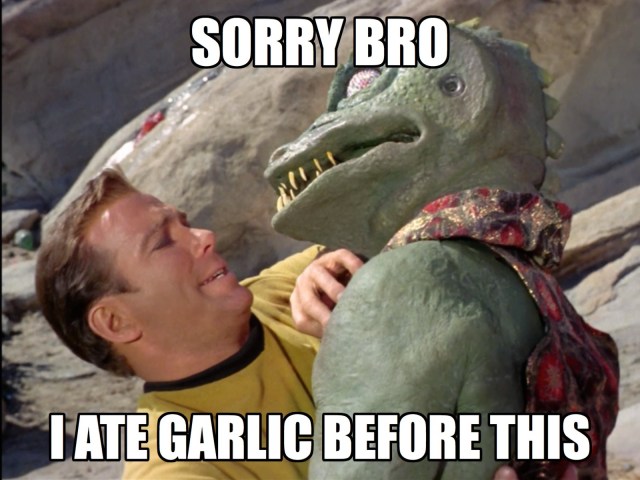 The Metron have casually informed Kirk that all the materials he needs to build a weapons will be on the planet. He rolls around in yellow dust and gemstones, totally clueless about what to do. 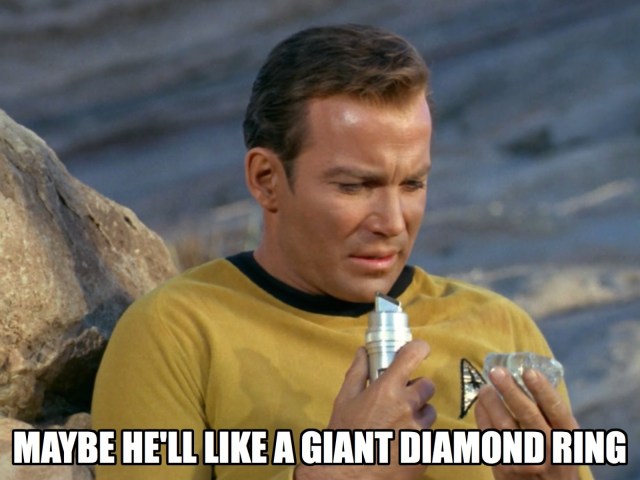 Meanwhile, Gorn is honing a prison shank and getting all MacGyver with some rocks and string. 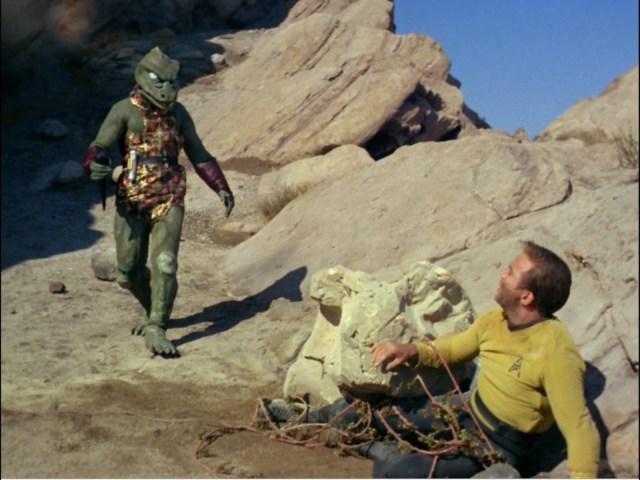 I’m tired, can we play a different game?

The Metron are terrible meanies, and they decide to live stream Kirk’s death to everyone on the Enterprise.

Gorn and Kirk start communicating with these awesome karaoke mics the Metron supplied. The Dance Off has now become a Sing Off.

Gorn grumbles about how the humans invaded his people’s land, Cestus III. And how Gorn killed them to protect his kind. Oopsie! 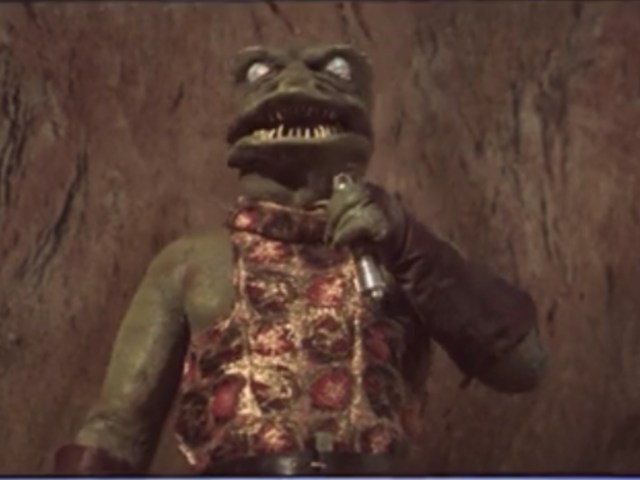 Kirk’s still in survival mode, and he has a brilliant flash of insight! Potassium nitrate + sulphur + charcoal deposits + bamboo = a giant gun! With diamond bullets! And that white dust Kirk was sitting in? Not cocaine.

This is like some convoluted RPG recipe. Right before Gorn jumps him, Kirk shoots him with the Bamboo Bazooka. 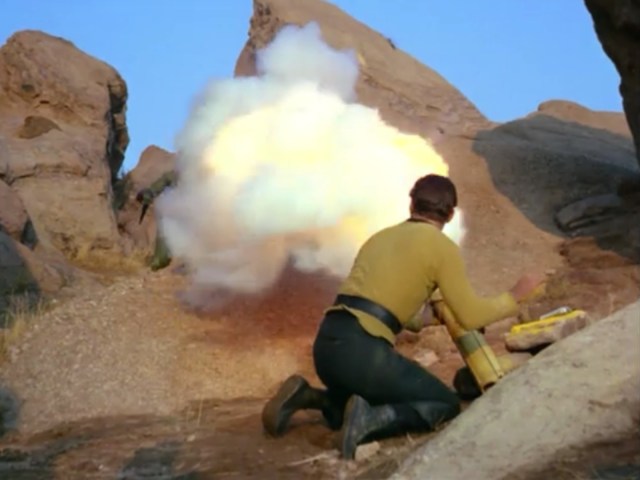 Kirk’s about to shank Gorn with his own weapon, but then his WAR RAGE wears off and he decides to spare the Gorn.

“You’ll have to get your entertainment somewhere else!” Kirk cries.

If the Metron really wanted entertainment, don’t you think these would have been better arena ideas than a deserted planet?

Gorn goes *POOF,* hopefully to an emergency room because dang, he just got blasted by a diamond canon.

Then the Metron appears. He’s a 1500 year old glowing boy, and I thought he was gonna launch into the “Touched by an Angel” speech. 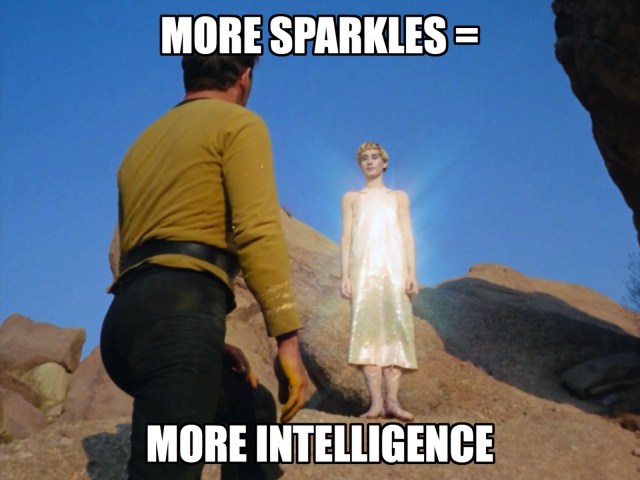 This rule does not apply to Twilight.

“You demonstrated the advanced trait of mercy, something we hardly expected,” explains the Metron.

He gives Kirk a gold star, a pat on the head, and returns him to the Enterprise.

So commenters, tell me: with the high death rates, how do they recruit more redshirts? And how would you survive the arena?