This week we watched an entire thirteen minutes and forty-seven seconds of Skins before turning to drugs, which means everything the Parents Television Council was worried about is true. 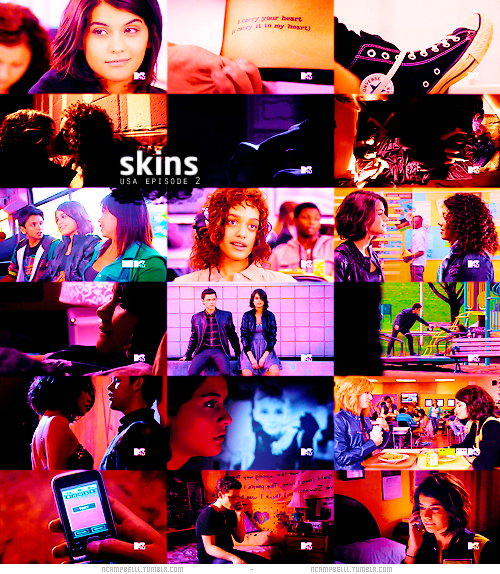 Without a doubt, however, the most unrealistic aspect of this week’s episode is that on a random weeknight, there just-so-happens to be a hoppin’ lesbian club night that lets in 16-year olds within walking/bussing distance of Tea’s house. I mean they take ten busses and a hydroplane to get to school and it’s only a hop/skip/jump to pussy palace?

We open in Lesbian Cruising Spot #1 — NOT THE PLANET THE PLANET ISN’T REAL — History class! Is this what happens in high school these days, children? Is it? 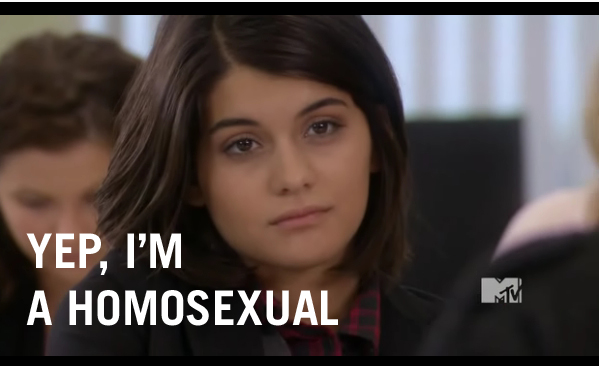 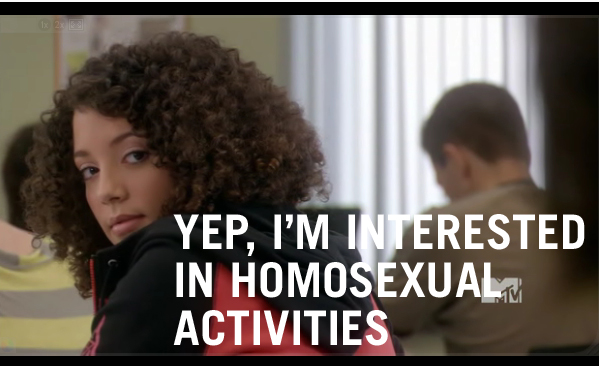 Tea invites Betty to join her at Lesbian Club Night in Fantasyland via mysterious table-dropped note which reads “Northern Soul.”

Tea roars sexily through her busybusy life, surrounded by noise and chaos, eventually escaping into the dear refuge of her bedroom where we can watch her undress and check out her literary tattoo:

Tea’s got her lesbo-jeans, lesbo-shoes and GLITTER SHIRT on, as well as a giant coat that is not fucking around. IT’S TIME TO MEET THE LADIES 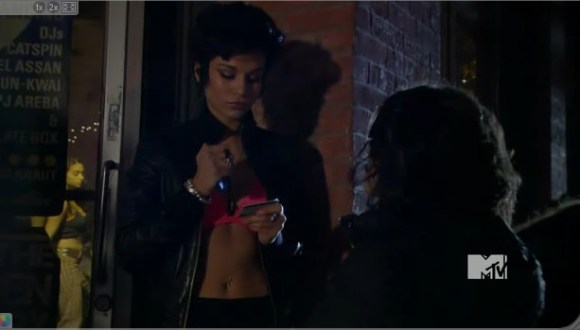 But This ID Says “Maxxie Oliver”?

No lesbian bar would ever be named Northern Soul, it would be named “Lick” or something. Which is the name of an actual lesbian bar in Vancouver. This is how we prevent anyone wandering into Meow Mix looking for Monday Night Football or e-harmony speed-dating.

Tea’s confident and demurely plucky, like a girl with a lot going on in her head and no suitable receptacle for her feelings. Thus she saunters confidently towards the Lordess of the Dance. 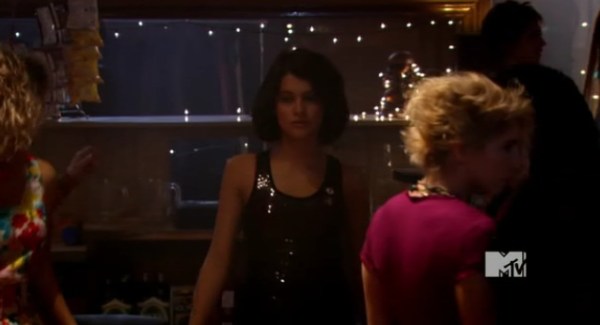 Someone Get That Girl a Blog

Also? Tea’s got this little dance she does that makes you want to cuddlefuck the hell out of her glittershirt and Chucks. 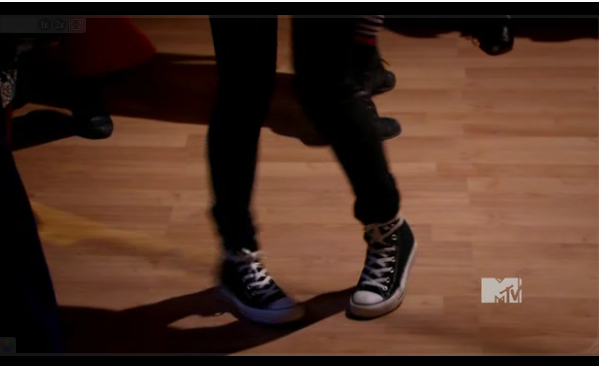 Betty, dressed like her namesake from the Archie comic books, arrives, as promised… 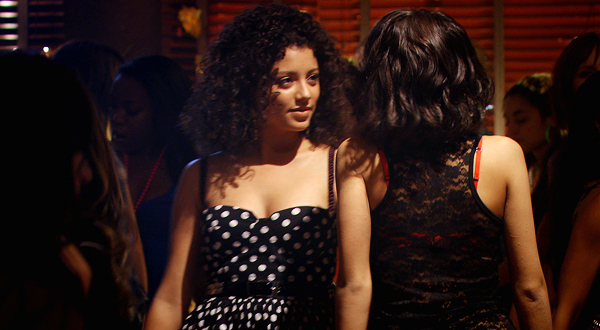 Before long, Tea and Betty begin Lesbian Kissing each other in a way that suggests they will soon be Lesbian Vadgeblasting. Get your gas mask on, the apocalypse is nigh. 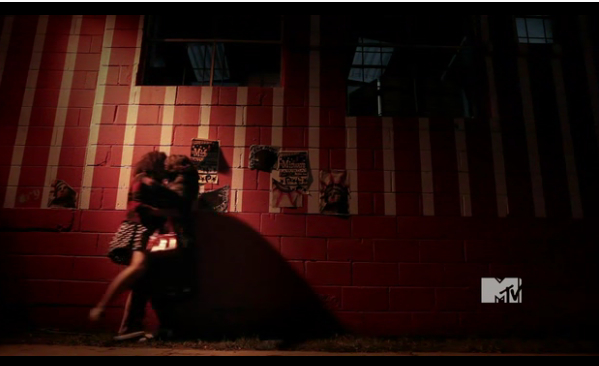 Betty, just like Showtime, has NO LIMITS and before long she’s back at Tea’s casa, clam-diving in what could not possibly be A DARKER ROOM UNSUITABLE FOR SCREENSHOTS. 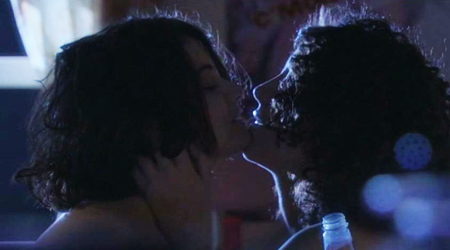 According to our chart…

Yes. They had sex.

This was not Palex sex… 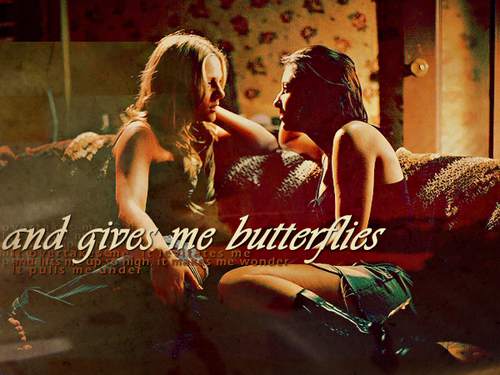 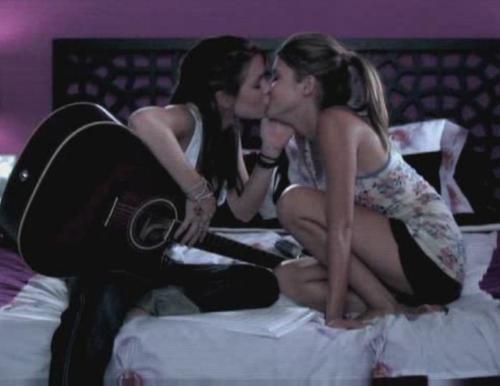 I mean, people definitely went down on each other. Just saying.

Already sleeping naked together, at such a young age. 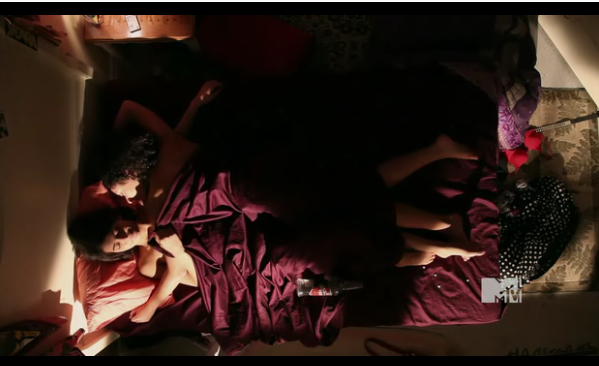 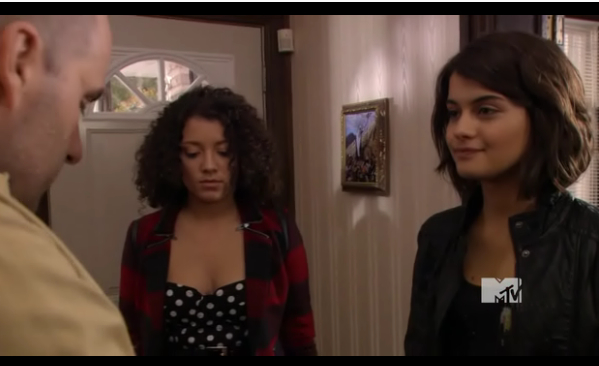 The next morning Betty puts that godawful dress back on and trods downstairs into the madhouse that is Tea’s family, which is when we meet NANA THE SURPRISE STAR OF THE SHOW: 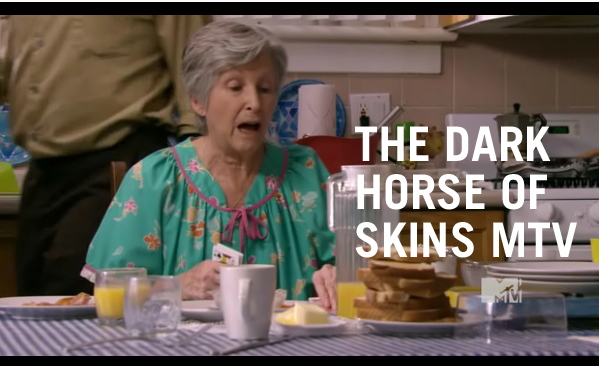 As Betty’s being awkwardly introduced and spoken to by everyone in the room because Tea’s Dad knows her boyfriend or something, suddenly, Tea’s brother calls out LOOK IT’S THE LESBIAN… 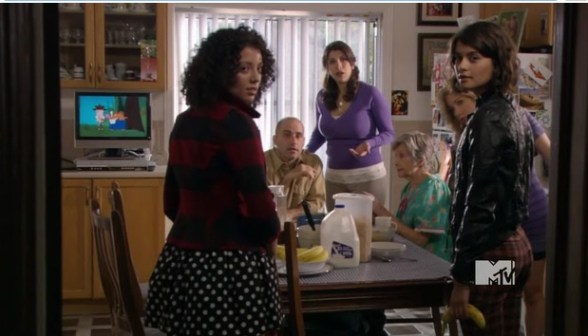 …and Mom says we can’t use that word here you know how Grandma hates it and the Dad says what word and Mom says “The L Word” and who can’t relate to that, right? I mean, who killed Jenny = so dumb. 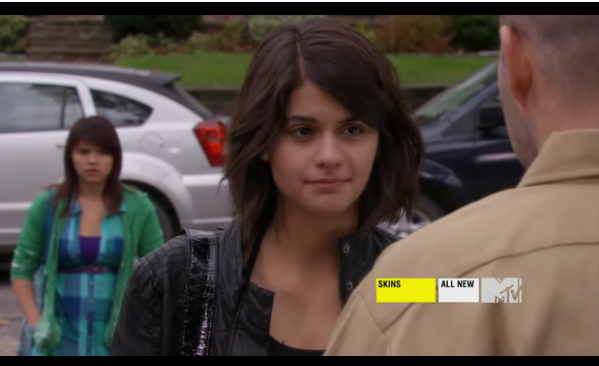 The one in leather or the one in plaid, you decide

But they’re talking about Daisy, who’s not a lesbian. She doesn’t even have a personality yet, let alone a sexuality. Duh.

Dad jokes that Tea is very “open-minded” and Daisy wonders out loud if Tea will ever tell her family that Daisy isn’t the fingerblaster here. Then Betty has her requisite morning-after freakout —

Tea describes her night of passion to Daisy as ‘alright’ with ‘a lot of licking.’ How many licks does it take to get to the center of a Tootsie Roll Pop/Tea’s heart? Time will tell!

Oh but first it’s time for our morning commute! 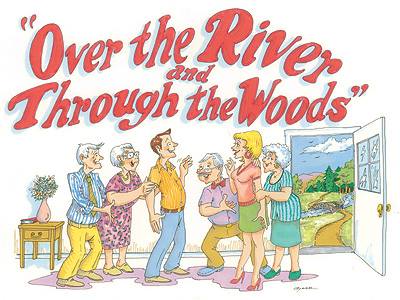 It’s another leisurely morning in RandomeasterncitymaybeBaltimore, where the children appreciate the morning light, have 2-3 feelings, ride the bus, get some bacon & eggs, and then wander into school just in time for lunch. 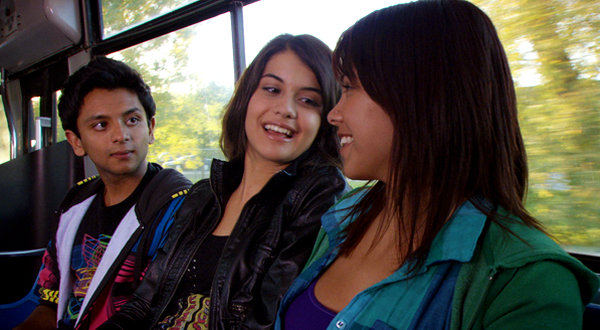 Hey Did You Get That at Kohl’s Back to School Sale? I Love Pencils!

Abbud needs to stop it with this OMG SEX thing. It worked when Dev Patel did it, because that dude is a good actor and I believe his lines were slightly better, but this guy is just irritating. Nice hoodie, though.

Ah, lunch. Such a pivotal time in the life of a young person. Lunch brings out the child in all of us, apparently, the child who can’t eat a chocolate bar without smearing it all over his face… 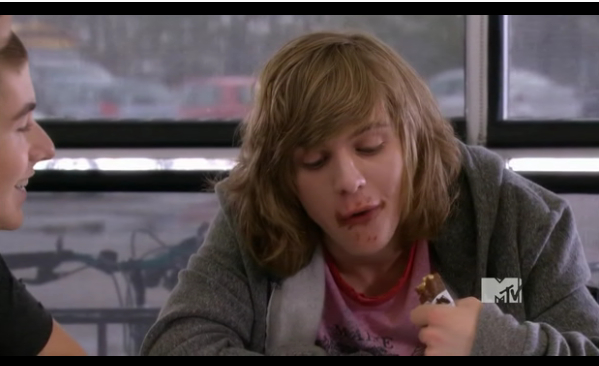 … the child who is so fascinated by FRENCH KISSES WITH TONGUE that when Michelle & Tony play a bit of tonsil hockey, the world must cease as the children stare on in wonderment, offering a verbal play-by-play… 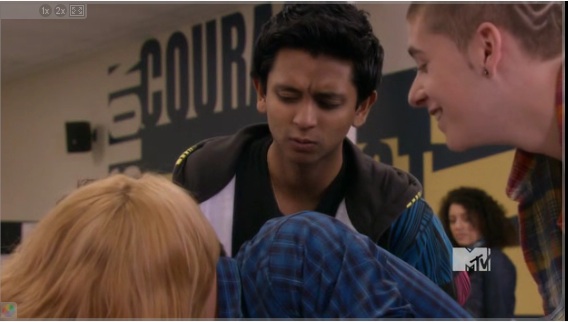 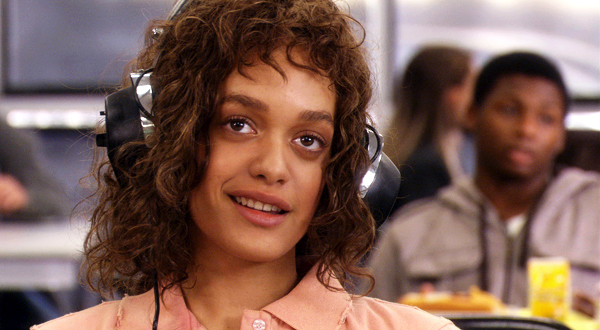 … the child who is so titillated by saying the word “breasts” that it must be repeated, multiple times, slightly different but no less exciting every time, just like the idea of the cheerleader showing everyone her boobs at halftime, which I think counts as child pornography.

But back in grown-up land, SOMEBODY HAS FEELINGS and is sharing those feelings with Tea via eye contact. 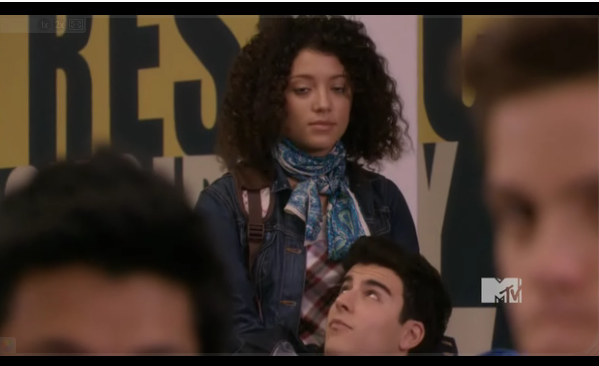 I’m putting my money on “credits Tea with her lesbian awakening, falls in love with her” 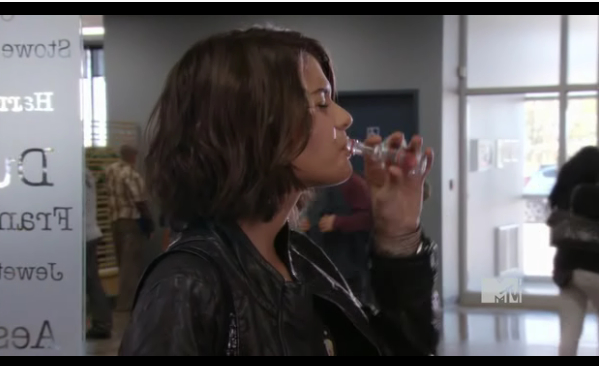 I Know This Mini-Bar

Tea chases lunch with a mini-bottle of vodka but luckily evades an open container law as she lives in no-mans land. I mean that could totally just be a mini-bottle of clear Tabasco sauce or some kind of lesbian witch potion. OH LOOK WHO IT IS — 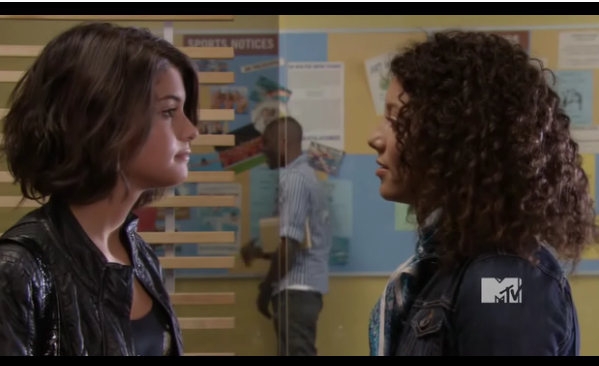 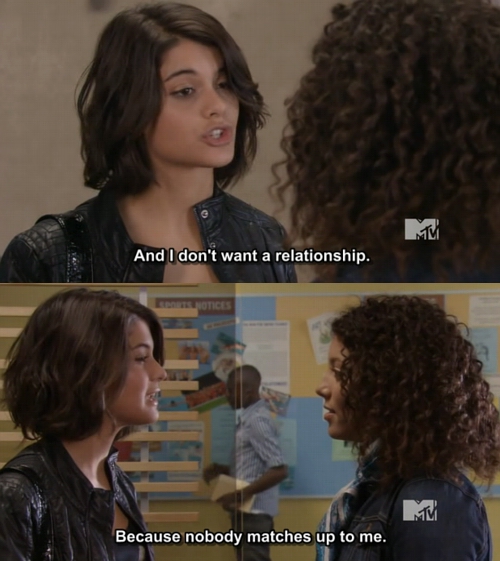 Tea: “Sounds like pretending to me, and that’s bad stuff I have to avoid. And I don’t want a relationship.”
Betty: “Why’s that?”
Tea: “Because nobody matches up to me.”
Betty: “You’re just an arrogant bitch really, aren’t you?”
Tea: “Sorry, scaredy cat.”

Tea’s family is playing “who can talk the loudest” and at first we think Tea’s going to come out while everyone talks, like when Bette told Jodi that she slept with Tina (or something like that, I can’t remember) and Jodi couldn’t hear her which was like, really mean but also weird, but no instead Tea yells for everyone to be quiet and everyone is for about a minute and then chaos re-erupts. 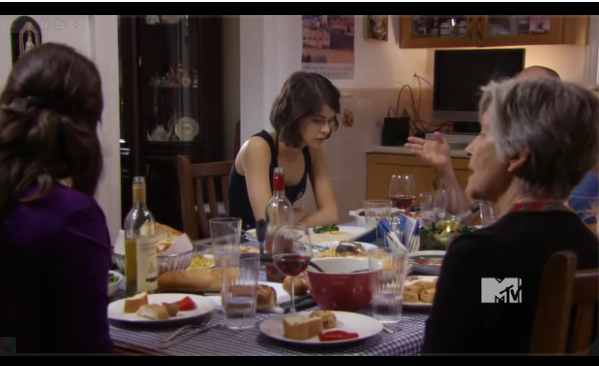 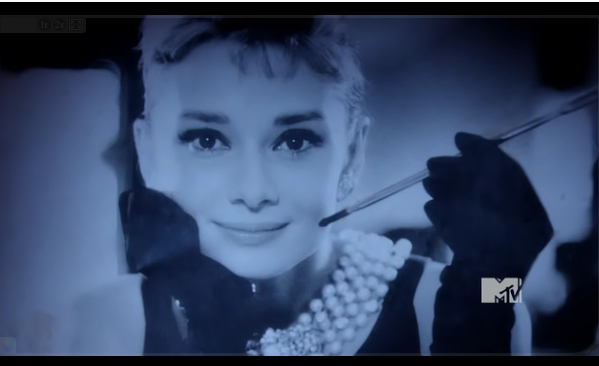 Breakfast in Bed at Tiffany’s

Tea’s getting intimate with Audrey Hepburn in her dreams when Nana strolls in, which would be embarrassing if Nana didn’t think she was walking into a Nuremberg Rally. 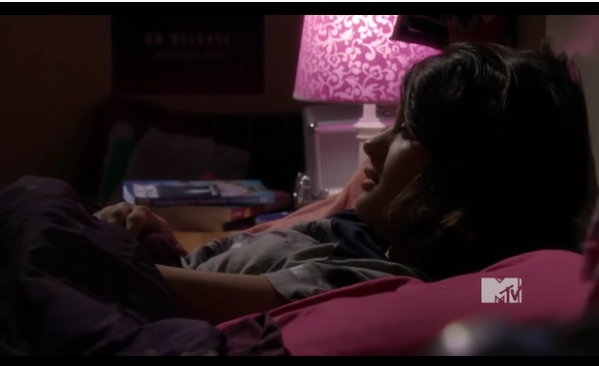 Blair Waldorf (at least in the books, IDK re: the TV show) Also Loves Audrey Hepburn, Maybe They Should Bang

Probs Nana is thinking, “Audrey Hepburn sure is looking lovely these days.” She calls Tea “Ruthie” and says she doesn’t want her marrying that boy. Tea figures this would be a good time to bounce her private ideas off somebody who has a lot of love but not a lot of memory.

Tea: “Something’s wrong with me Nana. I want the sex but the girls I sleep with? Bore me. They’re catty and clingy and I dunno — it never feels like enough. Is it too much to ask for someone to be interesting? I just wanna feel equal.” 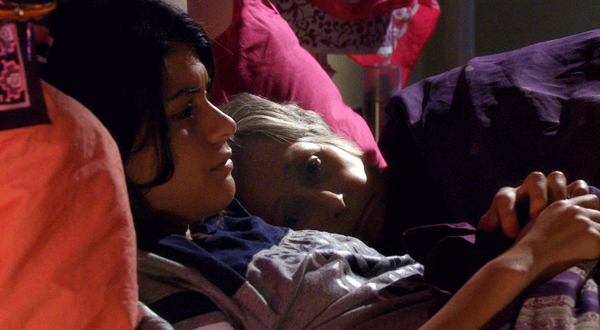 And I Said, What About Breakfast at Tiffanys and She Said “I Think I Remember the Film”

Two thumbs up for the “gay AND.” As in: she’s not a one-note lady for whom navigating homosexuality is the only issue. ‘Cause it ain’t — relationships are complicated & confusing regardless of gender, and by often watering down teevee homo plots to “Gay” being enough to ride a character, writers really shortchange us. So Big Up to Brian.