It’s been at least a year, I think, since the last time Life & Style indulged in a hot steaming bath of Shiloh Panic, a word Autostraddle invented to describe “society’s response to non gender-conforming children.” Although we try to stay away from celebrity gossip and really anything about children, we feel Shiloh Panic is a serious issue in our community as it perpetuates some of the most damaging ideas about gender. 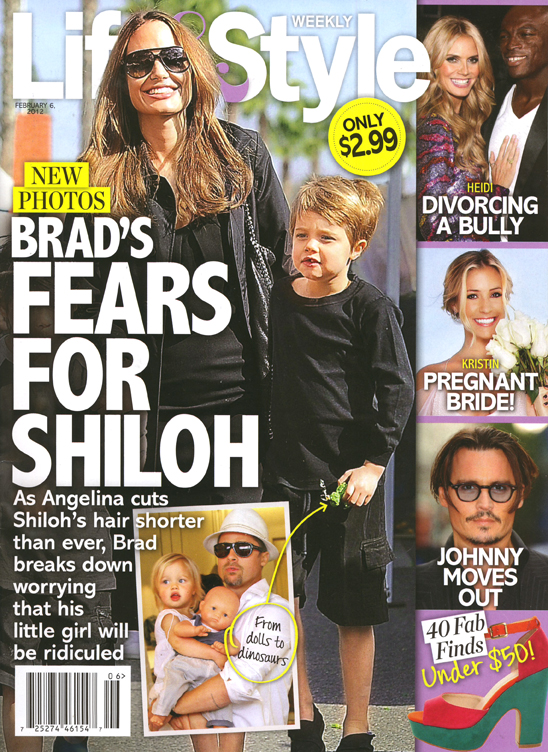 For starters, it seems patently obvious that the only people ridiculing Brad Pitt’s daughter are the editorial staff of Life & Style. I fear for Shiloh, too, but it’s not because of her haircut — it’s because of Life & Style‘s obsession with her haircut. It’s all quite meta, really.

Furthermore, in a magical move typical of celebrity rags, the magazine kills two sexist tropes with one stone: Angelina’s unable to mother because working women with ex-girlfriends clearly cannot take care of children and Shiloh is doomed because she wears clothes from the boy’s section. Those crazy Jolie-Pitts!

On the Life & Style website, the following is revealed:

Angelina Jolie was beaming as she and three of her kids shopped at the Studio City Farmers Market in LA on Jan. 22, but fellow shoppers couldn’t help but notice daughter Shiloh‘s new shorter-than-ever haircut.

In fact, one onlooker even mistook the adorable little girl for one of the Jolie-Pitt boys. “It was very chaotic,” Lynda Stenhouse, who was at the market, tells Life & Style. “She rushed by my section, but I did notice her skinny white legs and the commotion of the boys.”

Now, in the new issue of Life & Style, sources reveal that while the proud parents encourage their little girl to be independent, Brad is concerned about the scrutiny to which Shiloh is being subjected.

“It would crush Brad if one of his kids was picked on,” says a friend of Angie’s. And there’s reason for the parents to be on edge over Shiloh, caution experts. “This is a culture where kids get picked on if they don’t look like other kids,” points out psychotherapist Jonathan Alpert. “Shiloh’s already different — being the daughter of superstars — and she may already feel ostracized because of that.”

And while Brad, like any dad, is going to worry, he also knows he can’t change his little girl. “I want [my kids] to explore that innocence as long as possible and find out what’s really interesting to them,” he confides. “I just don’t want to encumber them in any way.”

There’s plenty to dissect in there, though I find the idea that her “shorter-than-ever” haircut is used as a trademark of impending deviance immediately hilarious. When she had short hair, that was one thing, but now that she has SHORTER hair, she’s basically Rosie O’Donnell! What the fuck?

Anyhow, before I continue this rant, let’s take a little trip back in time to the first time this happened, which was in early March, 2010. In response to this cover…

…we asked “at what point does media panic regarding Shiloh’s Radical Androgynous Haircut cross over into Officially Offensive Territory?” and suggested that the cover was an example of either transphobia or awesome-phobia (the latter because Shiloh’s tomboy style is fan-fucking-tastic and we’re super jealous of her access to such rad sneakers). We pointed out that although the print magazine industry is in trouble, Life & Style isn’t — their circulation numbers continue growing, presently hovering at about 4.9 million readers. These are the magazines you see at the dentist, hair salon, and on the floor in your shared dorm bathroom under someone’s Caboodles. These headlines are what children see when they’re waiting in line at the grocery store with their parents. This kinda actually really does indeed matter.

Anyhow, back in March, even GLAAD came out against the magazine cover and the horrifying article within:

The National Center for Transgender Equality noted that “the length of Shiloh’s hair or the clothes she wears are really matters for her and her parents to decide… what’s important here is that every child, including Shiloh, has the opportunity to express herself and explore her world in a way that is safe and nurturing for her.”

So unconcerned, in fact, that they chose to do it AGAIN in September 2010: 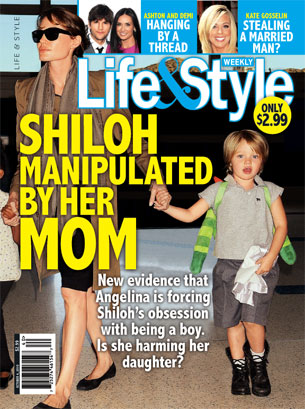 One way in which all these covers fail so monumentally is that they all draw illogical conclusions from the evidence presented to them — it seems far more natural to assume that Shiloh herself wants short hair, sneakers and dinosaurs than it is to think her mother is burning Shiloh’s dresses and strapping Shiloh to a chair to hack her locks away with gardening shears.

Another way (more blatant in the earlier covers than in this week’s) is a much more common mistake — the idea that “tomboy” behavior is a strong indicator of sexuality or gender identity. C.Lynn Carr’s 2007 study “Tomboyism or Lesbianism? Beyond Sex/Gender/Sexual Conflation,” found that the fact that “a large majority of women recalled wanting to be boys (sex) in order to do things that boys got to do (gender) may be testament to the relative powerlessness of children, who are often told how to act and what they can and cannot do by peers, parents, and educators.” Other studies have shown that between 51% and 67% of adult women report childhood tomboy behaviors, so it’s hardly even notable.

Not that we care if Shiloh is queer or trans and I think it’s highly inappropriate to even speculate at this point. Right now she’s just a little girl who likes to keep her hair short, and these covers reinforce the idea that non-gender-conforming children are playing with fire AND that there is something inherently wrong with being trans or queer. I mean they don’t have to say it directly, we know what they’re getting at. 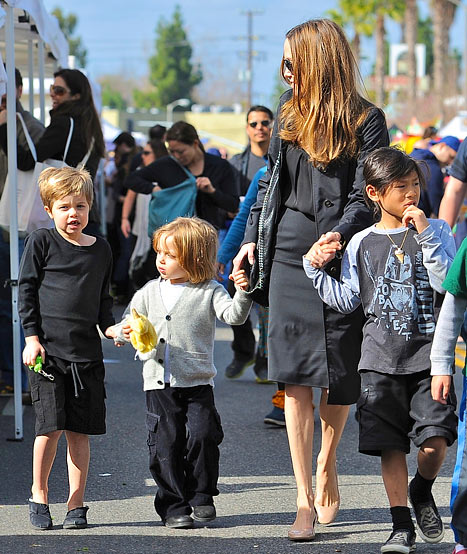 US Weekly captioned this photo "Shiloh Jolie-Pitt's adorable tomboy look is back!" which is a lot more like it

These covers are presenting the idea that Shiloh’s style will get her bullied while actively bullying Shiloh. Apparently when presented as “concern,” bullying is completely acceptable, a brand of hypocrisy we constantly see employed by anti-gay-rights activists as well.

It seems that if Life & Style is so concerned about how Shiloh will get treated by her peers during some ambiguous yet-to-be-realized future in which Shiloh will suddenly be surrounded by an entirely new peer group, they should look at why the world is so hostile to anything “different” or “out-of-the-ordinary” rather than directing the world’s attention to something “different.” What if the “problem” the magazine was freaking out about wasn’t going from dolls to dinosaurs but being overweight or poor or, you know, GAY?

So nice one, Life & Style. I pray no self-loathing suicidal gay teenager gets his or her hands on this piece of shit because the message you’re declaring is extremely loud and incredibly clear: it’s not the bullies that need changing, it’s the bullied. And that’s just plain wrong.