If you were to rely solely on media and pop culture to shape your musical knowledge, you may think that the only female hip hop artist worthy of your attention right now is Nicki Minaj. 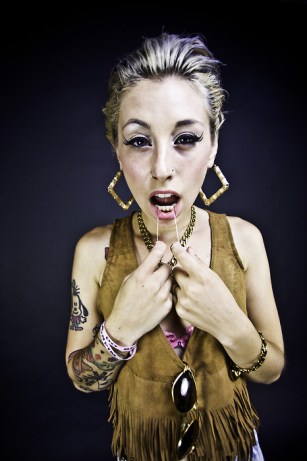 Or worse, Kreayshawn, who claims bisexuality only when it’s convenient, and seemingly thrives on being a direct representation of everything that is wrong with hip hop: the glorification of labels and name brands over knowledge of self; the adaptation and appropriation of hip hop culture without a genuine sense of what it really means.

With the plethora of hyper-sexualized females using visual gags and fashion stunts to keep your attention and an overwhelming amount of misogyny pervading the genre, it can be easy to forget that the history of women in hip hop is incredibly diverse, expansive and amazing. Even more disappointing is the fact that you can listen to copious amounts of modern Hip Hop and not realize that there are plenty of talented female MCs in that world, both past and present, who often get overlooked. With that said, I’d like to introduce you to a league of talented ladies who deserve a few plays on your iPod.

The hardest part of creating this list was trying to narrow it down to just seven great female MCs. It took two  weeks of intensive research, decisions, redecisions, debate and general fuckery, but I think what we have here is a great starting point for anyone who’s curious about women in Hip Hop.

Please don’t mistake this shortlist as anything ‘official’; there are a host of up-and-coming female rappers out there who are equally as deserving of your attention: Ethel Cee is pretty amazing, as is 7th Stori, Kid Sister, K-Slay, Snow, Karmin, and Ill Camille. And let’s not forget the legends who they learn from; MC Lyte, Salt & Pepa, Queen Latifah, Lauryn Hill, Eve, Da Brat, Bahamadia, Mystic, Rah Digga, Ms. Jade, Lil Kim, Foxy Brown and my personal favorite Missy Elliot…artists who have consistently delivered an eclectic mix of positive, artfully done Hip Hop, as well as the occasional and oh-so-necessary party anthem.

Women have always been and will always be a powerful force in Hip Hop, in various forms and styles. Don’t let anyone make you think different.

Amathyst Kelly, an adorable Aussie sensation now residing in Los Angeles, seems to be channeling 2 Live Crew when she rhymes. Her lyrical content is provocative and raunchy; her beats and production exist solely to get the party started. Most impressively, her delivery is clear and sharp, even with the (thick and sexy) Australian accent. While the ever-popular track and video for Pussy comes across as a play for attention, Iggy’s debut EP Ignorant Art is an impressive start. Having recently landed on the XXL Freshmen cover and signing with T.I.‘s label, it looks like her buzz is picking up.

I would love to see Iggy develop her lyrical content bars further, and quick. Party rhymes are fun and all, but she raps too well to not expand on that lyrical persona. Also, don’t give up the Australian accent  for us, kid. It’s why we love you.

Hailing from Harlem, Banks has made an interesting musical venture into EDM/dubstep, trip/hip hop, pop hooks and at times, excessive swearing. She’s wild with both her delivery and rhymes, but also able to hold a decent note when singing her own hooks – something I’ve come to enjoy more than anything else. Azealia learned the industry ropes quickly, consistently delivering upbeat tracks and catchy hooks while maintaing a quirky style that’s completely her own. Having gained popularity with the bloggerkids in 2011, she’s now performing live at Karl Lagerfield’s fashion shows, selling out concerts in Europe and even starting traditional “rap beefs”, most notably with the aforementioned Iggy Azalea.

The most entertaining part of all? Azealia’s newly Diplo-produced single Fuck Up The Fun; a great demonstration of just how little Azealia does not give a fuck about you or your feelings. It’ll be interesting to see if her style can hold up over time, or how it may evolve not that she’s signed with Lady Gaga‘s manager. And if you haven’t yet read Katrina’s post on Azealia from a while back, it’s worth checking out.

Born in northern California and now residing in Texas, Claudia A. Feliciano, aka Snow,  is quickly becoming a favorite. The product of a loving Latino family with a southern background, Snow is the only bilingual rapper on this list, and has the most intriguing delivery as well.

Snow’s style is akin to that of Chicago legend Twista (Yelawolf for you new kids): a swift and rapid lyrical delivery set to agressive 808-heavy production. Snow is approaching her fourth album plus shooting clips for her popular youtube videos series, but hasn’t yet received the promotion she deserves. She has a huge advantage being able to rap in two languages and is on her way to carving out a special niche in hip hop. Gabby’s a fan of hers, too!

Rapsody, aka Marlanna Evans, is pretty flawless with her lyrical prowess. Clear and concise with a laid back tone, she’s the creative wordplay queen on this list, using signature 9th wonder beats as the perfect canvas to paint lovely pictures with her words. Her motto, “Culture Over Everything”, is reflected in her flow; you can hear the direct influence of past musicians like MC Lyte and Lauryn Hill in her style. Signed to JAMLA records but still relatively new to the scene, Rapsody has already racked up an impressive list of collaborators including Mac Miller, Jean Grae, Big K.R.I.T., Erykah Badu, Kendrick Lamar, Murs, Big Daddy Kane, Rah Digga, Freeway, Raekwon and the legendary DJ Premier. Consistently on the grind and releasing engaging, refreshing tracks, Rapsody has made four mixtapes and one EP for you to review, and has her first full length release, The Idea Of Beautiful, on the way. A personal favorite of mine, I hope to see this little lady go far, and soon.

Detroit continues its streak of hip hop victories by producing Boog Brown, an artist whose resume listed published author and poet before she set her sights on establishing a music career in Atlanta. Boog’s writing background manifests in her relaxed flow and profound storytelling. Named one of iTunes’ 10 Best New Hip Hop Artists in 2010, alongside the likes of B.O.B., Drake, Nicki Minaj and J. Cole, Brown has spent the last two years expanding her musical repertoire with two albums, several tours and tons of guest appearances. Brown’s most recent victory? The Brown Study Remixes, her best work and production to date.

Brown has tons of tracks for you to discover. My current favorite is The Gifted Freestyle, a short, stylish introduction to what this artist is all about.

Over seven years and four albums, Canadian-born Eternia, aka Silk-Anne Semiramis Dawn Craig-Kaya (wow) has used her husky tone, poetic phrasing and aggressive delivery to build an impressive list of  accomplishments. After dropping “Love” – a single dedicated towards ending domestic abuse – and releasing her stunning debut album It’s Called Life, Eternia was nominated for Rap Recording of The Year at the 2006 Juno Awards – one of the first women to have that honor. After a few more awards and a deal with FatBeats records, she released three more albums including At Last (2010), a critically acclaimed album and possibly her best to date. Eternia is just one artist from a talented musical family; her brother is industrial musician Ad·ver·sary and her sister can be heard singing on the hook of “Love,” below.

Now working on the seventh album in her 15-year career, South Africa-born and New York-raised Tsidi Ibrahim, aka Jean Grae, continues to raise the bar for female rappers. Jean is the daughter of legendary jazz musicians Sathima Bea Benjamin and Abdullah Ibrahim, so she was basically awesome from birth. Her style is remarkable; she is a master of speed, cadence, delivery and storytelling.

Jean began to build her repertoire in the mid 90’s New York underground hip hop scene, performing as What What? alongside groups like Brooklyn Academy and Ground Zero. However it wasn’t until Jean’s first solo release, Attack Of The Attacking Things, that people really took notice. After two additional EPs, her next project Jeanius with famed producer du jour 9th Wonder was highly anticipated, but suffered delays and other hassles due to an internet leak. Citing disenchantment with the music industry, Jean took a break from the scene but has recently returned to work on a new project, Cake or Death. Now she has a pretty great Twitter, and a large and loyal fanbase that is excited to have her back – it will be interesting to see how the Cake project goes.

Ericka is the woman behind one of Autostraddle’s favorite music blogs, Music Nerdery, and is currently on tour with the amazing Anita Baker.