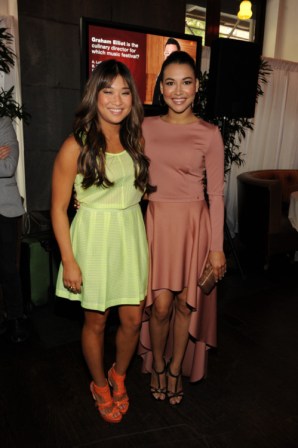 Because Glee‘s always so adept at pulling off complicated concepts, the team has announced that for Season Four, they will attempt the “show-within-a-show” format which will “revolve around a handful of graduating seniors and be set at a performing arts school in New York.” However, The Hollywood Reporter reports that the series’ primary location will remain the slanderously appropriated residence of Lima, Ohio and its storied McKinley High School, and that Glee will be announcing Season Four’s new cast of characters over the next several weeks.

There’s a lot of speculation surrounding who of the main cast will return to this hellscape come fall, especially after last week when both Dianna Agron and Amber Reily tweeted things that suggested a departure from the program. Dianna:

On May 9th, Riley tweeted:

“That’s a wrap on Amber Riley! Just closed a chapter in my life, the only thing I’ve known day in and day out for three years. I’m going to miss the whole Glee family, seeing them everyday! I have so many brothers and sisters now :) But I am looking forward to a much needed and deserved summer vacation! SCHOOL’S OUT Glee Kids! Let’s play!”

When fans deduced that Riley would be leaving the show, she followed up with:

“My tweet apparently has been misconstrued. I was not confirming I was leaving the show. Just stating that I would miss being in the classroom everyday with the cast and that would be changing. Thanks for the support guys :)”

It’s Upfronts week, and today has been a busy day for Glee fans. This afternoon, Naya Rivera all-but-confirmed her Season Four return by announcing she was on her way to UpFronts and is “excited to see everyone and celebrate the start of a new exciting season of Glee!” Today on Big Morning Buzz Live, Chris Colfer said “we will all be back in some capacity, I believe,” and Jenna Ushkowitz made a similar remark on her appearance on today’s episode of The View.

The Hollywood Reporter, live-blogging Fox Upfronts, had only this to say about Glee:

Reilly talks Glee, moving to Thursdays. Sings its praises–ha ha. The show will follow some kids to theater school in NY. It’ll be “a show within a show.” No word on who’ll be in the show. Amber Riley isn’t here, though.

Also, Season Four will see Glee move from its present Tuesday night spot to Thursday Night, which I believe is somehow related to American Idol.

Tomorrow night we’ll be treated to two entire new episodes of Glee, “Props” and “Nationals.” “Props” will feature a bizarro-world sequence where Tina trips in a fountain and wakes up in a world where she’s Rachel Berry and everybody else is somebody else too:

“Nationals” will feature Lindsay Lohan and bring back Unique, the transgender female character played by a Glee Project winner:

No word yet on whether or not anybody at Glee has seriously considered my proposition to cut all dialogue from the show and make it into a Brittana Musical Hour.