Exactly one month ago, we told you about a South Carolina high school who was so dead set against allowing a GSA that they were considering cutting ALL extra-curricular activities just to shut it down. In the end, it was recognized as too extreme a measure, and the administration gave up that tactic. That’s not stopping Texas, though!

Texas’s Flour Bluff High School is so intent on denying high school senior Nikki Peet the ability to start a GSA that they’ve cut every single student group on campus. Dr. Julie Carbajal, the school’s superintendent, has made repeated statements that there is “no chance” a GSA will ever happen at Flour Bluff. Nikki first made her request for a GSA four months ago, and despite honoring every requirement for a student looking to create a 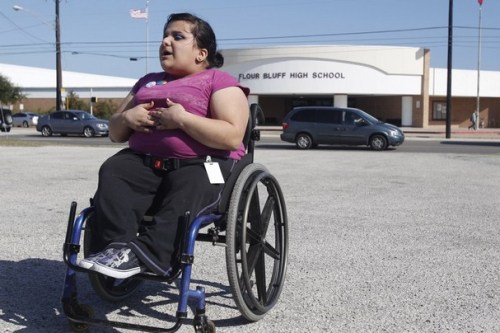 new group on campus, she was repeatedly denied. The school’s reticence led to more and more headlines each day – prohibiting the formation of a GSA isn’t just unethical and bigoted, it’s against the law.

According to the American Civil Liberties Union (ACLU) and the ACLU of Texas, the school district is breaking the law – specifically the Equal Access Act, passed by Congress in 1984. The Equal Access Act requires federally-funded schools to offer fair opportunities for students to form student-led extracurricular groups, regardless of their religious, political and philosophical leanings.  For years, Flour Bluff High School has allowed extracurricular clubs (including the Fellowship of Christian Athletes) to meet on campus with seemingly no issue – until now.

Finally the only recourse they could find to deny these students the community they wanted was removing student groups entirely from the school. This is not only appalling in that it demonstrates that these adults are willing to sacrifice resources and support for thousands of kids just to ensure that the ones who are gay aren’t getting any; the ACLU says this is an “unlawful prior restraint on Nikki’s speech.”  Carbajal says, of course, that the school is entirely within its rights; she says that it approved a policy in 2005 that gave it the right to refuse clubs’ formation if they weren’t tied to curriculum. This is also what Summerville High in South Carolina claimed – apparently the Zombie Appreciation Club had more academic merit than everyone was giving it credit for. There’s also some clear parallels to the Constance McMillen prom debacle – by taking privileges away from all students in order to deny things to the queer ones, it creates an atmosphere of blame and resentment, where straight students may blame and punish their gay peers, believing that it’s their fault they’ve been deprived of the Chess Club and Prom Committee when in fact it’s the fault of a homophobic administration. As Peet herself says, “It’s going to bring a lot of hate and animosity to the school because now people are going to be like, the people who are for the GSA, they’re the ones who stopped the other clubs. So we’re kind of being blamed for it,”

There’s still action being taken against Flour Bluff, however, and with the hard work of activists they may be forced to admit their wrongdoing. The ACLU has sent a demand letter to the school giving them until Wednesday, March 9 to allow a GSA on campus or face legal action, and the Texas Civil Rights Project is thinking along the same lines.

Harrington [of the Texas Civil Rights Project] told Six News “We will simply file a lawsuit in federal court, or we could also file a complaint with the office of civil rights and have the school district investigated for compliance with federal law.” He says Flour Bluff’s choice to ban all non-academic clubs from meeting on campus won’t get them out of hot water. “They’re doing this in retaliation. The fact that this group came forward for certification or for approval. So it doesn’t much help them at this point to play this kind of game,”

There’s also a protest planned outside the school on Friday, March 5 for 9 am. Attending will be Paul Rodriguez of the Gay-Straight Alliance at Texas A&M, and hopefully supportive members of the community. You can attend if you live in the area; otherwise, sign this petition from Change.org to let the Flour Bluff school administrators that the nation is watching, and we won’t let them hurt our kids because of their own hangups about homosexuality.