Summerville High School and Fort Dorchester High School are lucky enough to have a Gay Straight Alliance even though they’re located in the the relatively socially conservative state of South Carolina. Unfortunately, they almost stopped having one recently when the school board tried to shut it down after student complaints about its existence. Of course, they couldn’t just shut down the GSA because they didn’t like it; this is 2011, the era of strange/dubious excuses to mask homophobia.

Instead, they asserted that student clubs are meant to have a “curricular orientation,” and shouldn’t be focused around “personal identity.” One board member goes so far as to say that non-academic clubs distract students from their studies. So instead, the administration tried to shut down every non-academic club or organization, which included the Zombie Appreciation Club, the Prom Committee, the Fellowship of Christian Athletes and the Video Games Club, among others.

The school was thwarted in its efforts, but only when someone realized that their plan would also require terminating things like the National Honor Society and the Student Council. And Habitat for Humanity. That doesn’t mean the school won’t revisit the issue later on, though, with budget cuts expected for this year.

Under the guidelines of to the 1984 Federal Equal Access Act, which was formed to protect students’ rights to form religious clubs, if a secondary school which receives federal money allows one non-curricular club, it must allow all the others, including Gay-Straight Alliances. However the club must be initiated at the request of a student.

Of course, specific attempts to derail the ascension of high school Gay-Straight Alliances are nothing new. In 1999, the students of El Modena High School in Orange County, California, sued the school board after they voted unanimously to prevent the kids from forming a GSA. Judge David O. Carter of the United States District Court for the Central District of California ruled in favor of the students.

Other school districts have circumvented rulings requiring GSAs to legally meet at public schools by making GSAs “non-school sponsored” which can mean different things such as not being allowed to use a school intercom system, not being in the yearbook, not having club funds in school accounts, not being a part of other school events which do welcome gay kids, not having a spot on the student government. 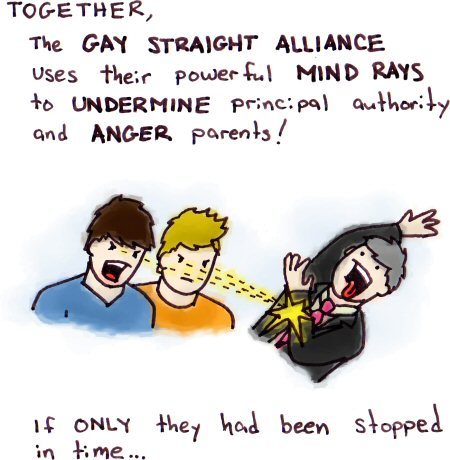 The first GSA was formed in 1988 by a straight student who wanted to raise awareness about anti-LGBT bullying and harassment. Over 1,000 schools had registered GSAs by 2001, and by 2008 over 4,000 GSAs had registered with GLSEN. Schools that have attempted to thwart the formation of GSAs generally lose in court.

There comes a time when you have to ask: what IS it that adults hate so much about gay kids? I mean, it’s not like they don’t also hate gay adults. If kittens could be openly gay, there are people who would hate them too. But the extent to which they seem willing and even eager to deprive all students and young people of the resources and support that they deserve, including straight kids and in this scenario possibly even their own children, is absolutely outrageous.

Obviously it’s no secret that this country is chock-full of homophobes. But it seems like school administrators should at least be inspired by legal precedent and a changing social climate to at least refrain from imposing their personal agenda on their work life. Are these decisions just holdouts from decades of prejudice, or are there new concerns gestating in the minds of America’s educators? Is there discomfort with a new generation that’s more comfortable talking about queer identity than any before it? Is it a general paranoia about teen sexuality?

We’ve been talking obsessively about the bullying of gay kids for months now, and seem to have come to a group consensus that the people who hurt gay kids in school just for being gay are afraid and angry and lashing out at a marginalized population that represents what they fear about themselves, and that because our culture supports them in their belief that gay kids are something to be afraid of, nothing is done about it. What does that pattern mean if, as we’ve been seeing, the bullies are increasingly likely to be the adults who are meant to be caring for and protecting these kids?

Maybe the question isn’t why no adults stepped in to save kids like Seth Walsh; maybe the question is why adults are so panicked by queer or read-as-queer kids that they lose the ability to even see them as children who need their care or recognize the benefits of GSAs. A degree of homophobia that engenders mistreatment of any and all children, not even just gay ones, is undeniably a problem in our system; even if you personally don’t care what happens to kids like Tyler Clementi, if you care about your own, then this is your issue too.

In short, to the adults that make decisions at schools like Summerville High: What is wrong with you? Maybe you should figure it out before damaging an entire generation.