If you’re anything like me (Heather), you’ve already watched The Owl House a third time waiting for the new mini-movie season to start, and, well, good news: Vallie has written a beautiful essay about all the things that make the show so special for queer weirdos. Another brilliant essay? Niko Stratis on how much She-Hulk owes to transness. Drew wrote another Slow Takes; this time about that bananas Netflix holiday movie 12 Dates of Christmas. Valerie Anne recapped another all-new Motherland: Fort Salem and reviewed the Cara Delevingne and Selena Gomez lip-smashing in Only Murders in the Building. And Carmen can’t but wonder: What in the hell happened to Valkyrie’s promised girlfriend in Thor: Love & Thunder?

+ The WNBA All-Star game is this weekend! 1pm Sunday on ABC! — Heather

+ Natalie told me I was going to love this week’s Loot and she was right! Michaela Jaé Rodriguez Sofia is, of course, my all-time favorite kind of character: hard shell and gooey caramel center. And this week, her softer side gets to come out even more than usual at a spa day. It’s just so dang adorable. — Heather

If Molly Ringwald’s Sweet Sixteen had actually been like this, maybe I would’ve watched.

Well my friends, Stranger Things 4 has come and went. Vecna was defeated (for now) and Hawkins is safe-ish (for now). It’s also looking like the Upside Down has come Right Side Up and the underworld might be meshing with the current world. But hey! Let’s leave that cliffhanger for Season Five where it belongs — right now I’m here to talk about all things gay with our favorite lesbian Robin and her favorite crush, Vickie.

I’m going to zoom around a little here because Stranger Things is always much more about the monsters than it is about any personal relationship (though I still maintain that the straight relationships on the show do seem to get the largest pie slice of screen time, even by this measurement. And it’s something I hope Stranger Things course corrects for Season Five, a little bit for Robin — but more than anything, for Will. Moving on!). Robin runs back into Vickie at the army surplus center while the Hawkins kids are buying guns to shoot up the telepathic demon of the Upside Down with while he’s in a meditative state torturing children. Just normal teen highjinx. You know.

Robin is devastated to see Vickie, who up to this point she thought was single and (hopefully, possibly, based on her frequent Fast Times at Ridgemont High rewatches) queer, fully making out with her boyfriend. Maya Hawke really sells Robin’s disappointment and pain, even if the show moves through it quickly to get back to the sci-fi adventure Scooby Doo shenanigans at hand.

Later, after Vecna is defeated, opening up a crater through the center of Hawkins that most think is an earthquake, and Hawkins has returned to somewhat normal — Robin runs into Vickie again, this time while both teens are volunteering to make PB&Js at the earthquake rescue shelter. Turns out that boyfriend? Home for Spring Break, hates that Hawkins is a hellmouth, hates Fast Times at Ridgemont High, and Vickie promptly broke up with him. When I tell y’all that Robin’s nervous cute little face at the news could light a thousand suns!!!

So of course they flirt — well, Maya Hawke makes excellent use of her perfect genetic make up for close ups while Robin smiles at Vickie, who is talking a mile a minute. They share eyelash glances, Robin holds her breath, and maybe.. just maybe… there’s a happy ending for this teen lesbian in 1980s demon spawn Indiana after all.

For All Mankind 305: “Seven Minutes of Terror” 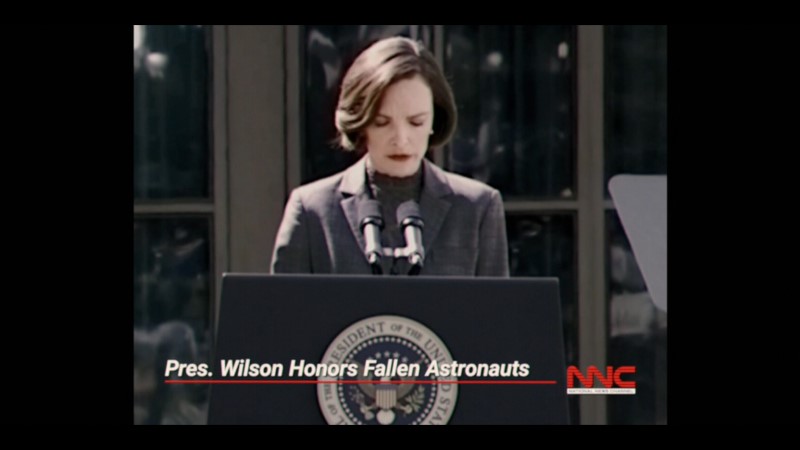 The lesbian character being in 90s live news footage quality while the straight characters are all in 2022 Apple TV+ HD feels like an apt metaphor.

Hello and welcome to my wee rant about For All Mankind. Here’s the thing: We’re halfway through the season already, and we still haven’t addressed Ellen being a closeted queer Republican president in the 90s. She even went back to the NASA base and she didn’t run into Pam while in town or anything. And like, yes, okay, sure, I know this show is about astronauts but how many Space Races do they expect me to care about if they’re not also going to give me the gay storyline I grew attached to?! Instead, this season, they’ve leaned back into the incredibly creepy Karen/Danny storyline I thought we were finally rid of?? Why???? At LEAST give me more Molly Cobb, show! Anyway, as much as I enjoy having a mild panic attack watching people get crushed to death in space, I wish Ellen wasn’t being pushed into the background of this show. (And I mean that literally. Most often, when we see her, she’s just on a television broadcast in the background of a scene.) I don’t know who would jump into a show partway through, but if someone did start with Season 3, they would have no idea Ellen is queer, and that bothers me. I was willing to give the show a few episodes to finish catching us up on all that happened in the time jump but, as I mentioned, we’re halfway through now and my patience is wearing thin. Danielle Poole is the only thing keeping me going at this point. Here’s hoping the back half of this season is a bit gayer.