The following review of “Thor: Love and Thunder” has spoilers for Valkyrie’s gay storyline. The most significant spoilers are marked off with the designation [spoilers begin], however reading ANY of this review comes with the presumption that you have either seen “Thor: Love and Thunder” or don’t mind being spoiled overall. And away we go on a flying winged rainbow horse called Aragorn! 🦄⚡️🌈

I first knew that I’d buy tickets to Thor: Love and Thunder back in 2019, when at San Diego Comic Con Tessa Thompson said that Valkyrie’s first priority as the King of New Asgard would be to find her queen. Ok wait, that’s a lie, I first knew I’d buy tickets to Thor: Love and Thunder back in 2017 during Thor: Ragnarok, when Tessa Thompson used a oversized space gun to make a joke about a strap-on. But I knew that I’d be buying tickets on the first day — Covid risk and all (I wore a mask the entire time) — when a Love and Thunder trailer came out last month, and Tessa Thompson was licking what appeared to be gold blood off of a sword with her whole entire tongue. I am but a simple woman, my sweet King Valkyrie was finally going to be gay on screen, after being queer coded for years with her canon bisexual scene left on the cutting room floor. I was going to be there to see it.

Of course, earlier this week we learned that the dreams of Valkyrie finding her queen were not going to happen. Instead the on screen confirmation of Valkyrie’s queerness would come from a mention of her dead girlfriend. I grinned and bared it. I’d already bought the tickets. By the time a viral tweet started circling about Natalie Portman (Mighty Thor/ Dr. Jane Foster) lying when she called Thor: Love and Thunder “so gay” — it only stung a little.

Before the THOR 4 screening last night Natalie Portman called it "so gay". Devastated to report — and really, you won't believe this — that she lied

Measured in terms of popcorn and air conditioning in July, there’s a lot of fun in Thor: Love and Thunder. It’s a worthy successor to Thor: Ragnarok (my favorite, and despite what Natalie Portman claimed, still the gayest Thor movie). Love and Thunder is full of the same irreverent humor, bright colors, and tales of space Gods that helped Ragnarok break the mold of previous buttoned-up Thor films and become a classic of the genre. It juggles too many plot lines, but does so efficiently, including an opening act featuring all of the Guardians of the Galaxy and also a recreation of Dr. Jane Foster’s plot from the Mighty Thor comics, in which she battles cancer by picking up Thor’s hammer and becoming her own version of a Thor. Yes, cancer battles are dark, but Thor: Love and Thunder somehow finds appropriate moments of levity that I didn’t expect, and for reasons I cannot explain, it mostly works? Speaking of dark themes that shouldn’t work but do — Christian Bale is a haunting standout as Gorr the God Butcher. His whole thing is that he wants to kill all the Gods in the universe for vengeance and Bale is simply sublime as the stuff of nightmares.

That’s all well and good, but I left Thor disappointed. Then the disappointment gave way to a fireball orbiting around me like rings of Saturn (hey! We are talking about a Thor movie here). It’s not only that Valkyrie, the King of Asgard and leader of her people, doesn’t have anything close to her own love story in a movie literally called LOVE and Thunder (well, it’s more than a little about that) — it’s that Valkyrie overall is criminally and bewilderingly underused. 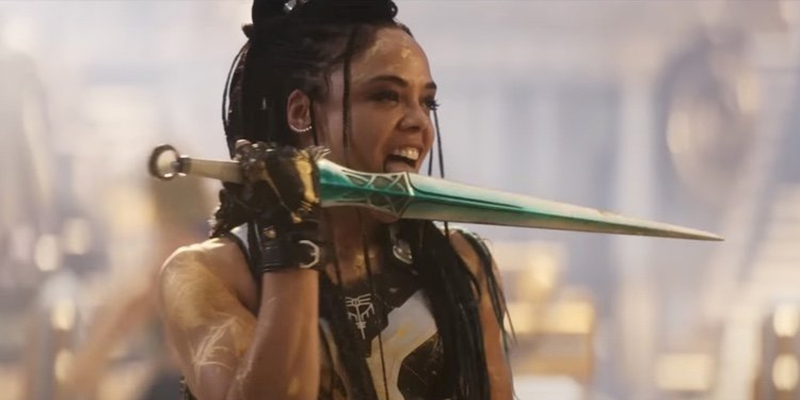 What’s fun is that Valkyrie’s very clearly queer; few women wear a suit as well as Tessa Thompson and the Gods bless us as King Valkyrie cycles through several, each hotter than the last. She briefly flirts with a greek goddess. As always, Tessa Thompson hums with what’s quickly becoming her signature “I’ll take you, and if you don’t watch out I’ll take your girl, too” energy beneath every gaze — and as always, it is perfect. And, given the context, it is a big deal to finally have Valkyrie’s queerness named on screen.

What’s upsetting is, of course, the scene where this confirmation happens — which was spoiled for many before the movie was even released. While traveling across the galaxies, Thor and Jane share a romantic moment on the deck of their ship. Inside Valkyrie, a little tipsy, confesses to Korg — a Kronan warrior whom I usually describe as “cheerful Rock monster” — that she stopped believing there was still love for her when her girlfriend, another Valkyrie, the love of her life, died in battle. Presumably we saw this death in a flashback during Thor: Ragnarok, though the movie doesn’t make that connection explicit.

[spoilers begin] The scene itself is a mild annoyance that I could get past, but what’s worse is that Valkyrie’s confession is almost manipulated immediately by Gorr to emotionally torture her (in a scene that, it must be said, Tessa Thompson just heart wrenchingly delivers) before she becomes a hair’s breath away from being the latest statistic in queer tv and film’s most hurtful trope. Then, for reasons that are not suitably explained, she sits out of the third act completely. I expected that with Jane Foster returning, Valkyrie (who was originally introduced to the series after Natalie Portman declined joining for the third movie) would have to vie for screen time. I did not expect that someone who at The Battle of Earth — gotta love those comic book movie names — and helped to defeat Thanos (!!) would be so thoroughly and unceremoniously sidelined.

In fact, her ending is so abrupt, I wouldn’t be surprised to discover in a few weeks that once again some part of Valkyrie’s plot ended up on a cutting room floor.

And that brings us back to fireball. The one that’s burning me. Marvel keeps getting away with this! There was no excuse that in 2017, the morning after flirtation between Valkyrie and another woman was edited out before Ragnarok’s release or that the death of her supposed greatest love was left as a question mark, only to be clarified in a movie five years later. There was no excuse that in 2018 a quietly queer flirtatious moment in Black Panther, reportedly between Okoye and Ayo, met the same erased fate. It was nearly laughable in 2019 when the first queer canon character finally came to the MCU, it was a glorified extra role in the early minutes of Avengers: Endgame (their 22nd film!) that could have easily been removed from the plot with no consequence.

Chloé Zhao’s Eternals in 2021 brought Marvel’s first same-sex kiss, which coincidentally could also be easily cut with no notice if necessary, Brian Tyree Henry’s excellent work as Phastos notwithstanding. 2021 also came with Loki coming out as bisexual, but in a single throwaway line during the third episode of his television show, which I mention with no disrespect to Loki director Kate Herron, who’s also bisexual. I’m sure even that single line was hard fought for. Earlier this year, in 2022, Doctor Strange and the Multiverse of Madness’ America Chavez, a famously lesbian Latina superhero in the comics, had her queerness reduced to a small Pride pin on denim jacket and a less than 20 second scene with her lesbian mothers, which again — are you picking up the theme here? — could have been cut without changing anything in the script! Disney of course, did not cut it, and if they wanted a pat on the back for their “brave” choice, look at that — I’m fresh out of participation trophies.

Now we’re full circle back to Valkyrie, who’s big anticipated queer reckoning — after her first cutting room floor incident — was merely a mention of an off-camera and dead girlfriend. Here we are again.

We deserve more than this. If skipping a single scene is all it would take to erase someone’s queerness for an audience, then it is not enough. We deserve more than “blink-and-you-miss-it” representation, or to pretend that representation is good — when we know it’s not! — because we’re scared that if we ask major studios for more, it will be taken away altogether. We deserve real storytelling, not crumbs. Even among Gods of thunder, perhaps especially then.

Marvel comics are notoriously queer, and owe so much to queer and trans perspectives, but the multi-billion dollar movie and television empire spawned off its back seemingly never will be, at least not in any meaningful way. That should probably not still be maddening at this point, but I guess I like ramming my head against a wall or something because I can’t stop screaming (or watching).

Ultimately, in a movie that promises love to span each universe, nearly everyone finds some version of a love-filled ending, except the sole queer woman of color. Even Korg — yes, the cheerful Rock monster dude! — finds gay happiness to call his own. Funny how the Black bisexual woman can’t say the same, now isn’t it?