Spoilers ahead for Only Murders in the Building, but only for the gay parts, and only of the first two episodes of season two.

Before this season, Only Murders in the Building got a stray mention on our gay website on a technicality; between a guest star here and a Jamie Babbit directed episode there, we found excuses to mention this show we enjoyed when we could because it’s fun vibes spoke to us, but it wasn’t until Cara Delevingne strolled into the art studios of our hearts in Season 2 that we finally could celebrate this show for being fully, canonically, very, very queer.

In case you missed the first season and are just here because the feature image piqued your interest, here’s an elevator pitch for the first season of this show: three residents of a fancy New York apartment building form an unlikely friendship after their love of true crime podcasts ges a little too close for comfort when there is a murder in (you guessed it) the building and they decide to start their own true crime podcast to try to solve it. It’s a bit of a romp while also interlacing some genuine moments of friendship, self-reflection, and grief. I genuinely did not expect to enjoy a show starring Steve Martin and Martin Short so much, but they bring so much gentle humor and are such great foils to Selena Gomez‘s sardonic Mabel, plus I love me a good, old-fashioned whodunnit.

Okay that was a long elevator ride so let’s get to the good stuff.

The second season of Only Murders in the Building hits the ground running with the same tone as the second, where the jokes are plentiful but the stakes are high. But now we don’t have to spend as much time developing the dynamic between the core trio, so they can start to explore their dynamics with other characters.

Enter: Cara Delevingne. As the trio gains fame and notoriety in the city, Mabel starts being called “Bloody Mabel” on social media, sometimes in a positive way, sometimes in a negative way, but either way she can’t help but check her notifications. There she finds a video message from a woman with prominent eyebrows and cheekbones that could kill a man inviting her to an art gallery opening. 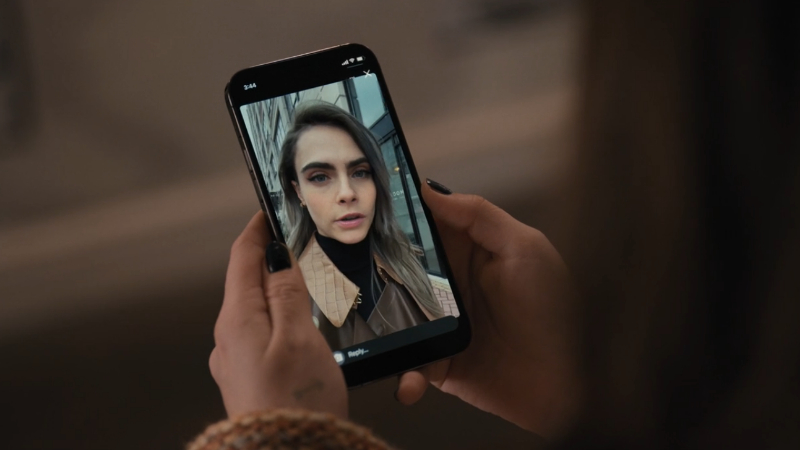 “Hey, I just met you, and this is crazy, but here’s my art gallery, I’m normal, maybe.”

And she even says later that she’s glad Alice wasn’t a catfish but if I found out any of my friends met up with a stranger alone after going semi-viral on the internet…I don’t care how hot they are, that is not smart behavior!!

But since I’m not there to yell at her, Mabel decides to go to the gallery and Cara Delevingne’s character, Alice, greets her while wearing the gayest outfit I have ever seen. 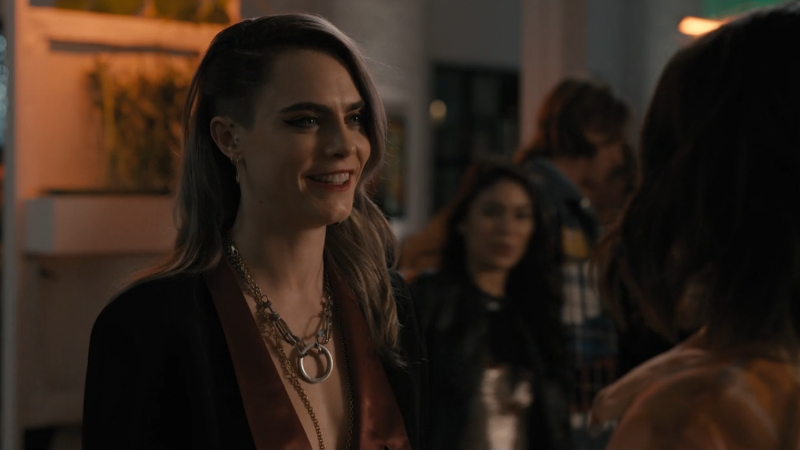 Mabel is telling a story about Frida Kahlo (gay) when she catches Alice staring at her (also gay), and Alice says she just finds her so compelling. She asks Mabel to join her art collective and Mabel agrees on the condition that it’s not a cult…an accusation which Alice does not outright deny. 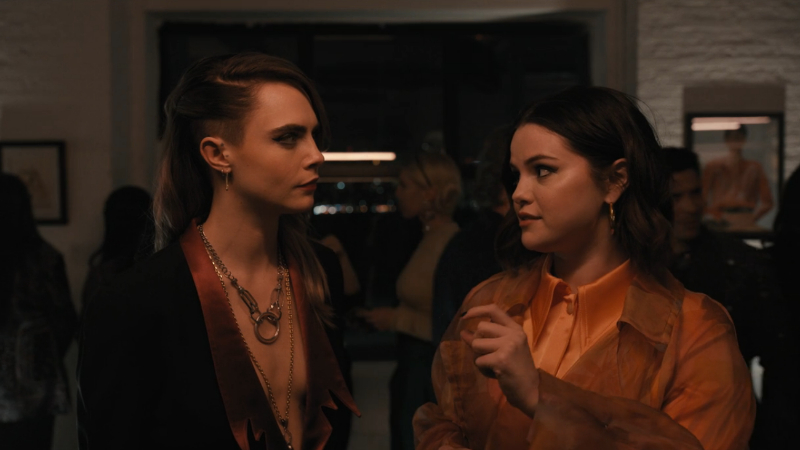 I probably would accidentally join a cult if someone who looked like and/or at me like this asked me to.

Later, Mabel gets caught smiling at her phone when Alice texts, and she ends up going to see her again at the gallery when it’s empty. Alice shows Mabel a sculpture and gives her an axe to destroy it with, as a form of art therapy and for a video series she’s doing. Alice caresses the axe, talks real close to her face, slowly places the protective glasses on Mabel’s face…And honestly? Processing your trauma via art is the gayest second date I’ve ever heard of.

After she’s done smashing out her feelings, Mabel tells Alice she feels better, and proves it by walking up to her and kisses her square on the mouth. Alice is pleased by this turn of events and kisses her back. 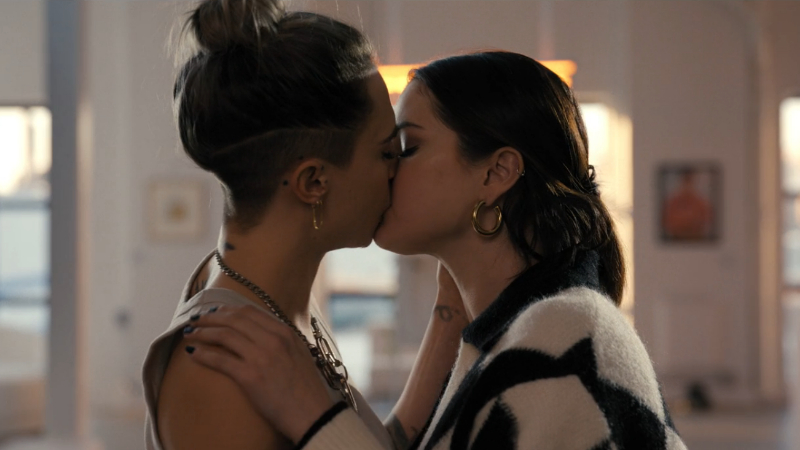 This show was like, “We only have 10 episodes, we can’t waste any more…KISS KISS KISS.”

And the world rejoiced!

Now, I scoured this good internet of ours, and I couldn’t find any definitive proof that Selena Gomez has joined the likes of her fellow former Disney stars like Demi Lovato, Miley Cyrus, and Dove Cameron in coming out as queer, only speculations I can’t in good faith take as fact. But I swear on a sex bench Cara Delevingne is, and regardless, I’m delighted by this turn of events for our dear Mabel.

I won’t lie, I don’t entirely TRUST Alice? Partly because she seemed to come on REAL strong, real fast, and Mabel’s gained too much attention for me to believe Alice isn’t up to something. Like maybe she thinks Mabel did a murder and is into that, or maybe she’s involved in this season’s murder mystery somehow. Maybe she has a rival podcast called Only Lesbians in the Building and wants to sabotage Mabel’s podcast. Or maybe Alice from Batwoman just made me overly suspicious of all Alices and actually this Alice is just someone hot and artsy for Mabel to kiss! Someone her age who gets her and can be there for her since lord knows she’s been going through it. Either way, I’m sure that it will be fun, because a) not mad at watching Cara Delevingne kiss girls on my teevee, b) watching Mabel have to explain to her old men buddies about bisexuality/queerness/this situationship will likely be hilarious.

This week’s episode was a flashback episode so there was no Alice, but in the future weeks I’ll be keeping you abreast of the queer shenanigans by way of our weekly Boobs On Your Tube column. Here’s hoping Alice isn’t the one doing murders in the building!