The Owl House has already made history in terms of queer representation with the love story that has blossomed over the course of two seasons between protagonist Luz Noceda and her magical classmate Amity Blight. Then, it made history again by introducing Disney’s first non-binary character, Raine Whispers. Who also happens to be deuteragonist Eda Clawthorne’s old flame.

Eda herself has long been a fan-favorite, having been part of the series from the very first episode. We first meet her when teenage protagonist Luz steps through Eda’s magic door into the strange and often terrifying world of the Boiling Isles, home to witches and demons alike. Eda is one such witch, the most powerful one, in fact, if her boasting is to be believed. She is also a wanted criminal on the run from the law, mostly for something she didn’t do: join a coven. This makes her a “wild witch,” whom government propaganda declares to be a danger to society. After taking Luz on an adventure, she agrees to teach her magic and let her stay in her home, the eponymous Owl House; and over the course of the series, the two bond over their social outcast status and weirdness.

In fact, it is right in episode one that Eda coins what could be considered the show’s catch phrase: “Us weirdos gotta stick together, you know?” 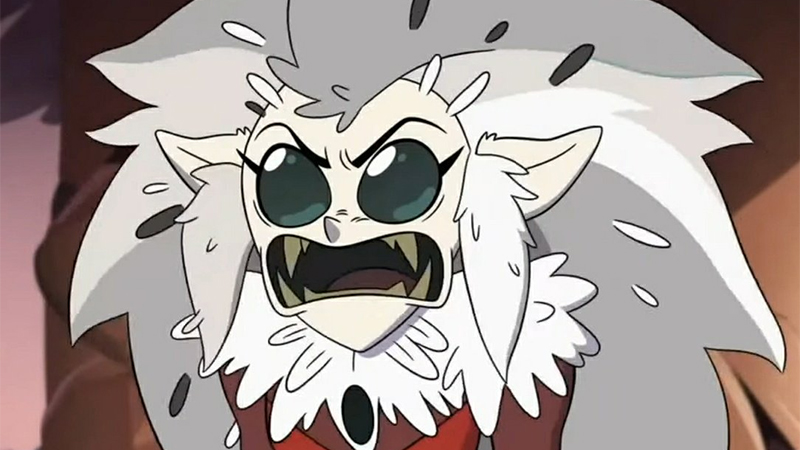 She is beloved among fans not just for her weird and kooky ways, but also for the narrative involving the incurable curse that has been put upon her in her teens, which causes her to turn into an owl-like beast that reads as a pretty obvious metaphor for disability, neurodivergence, and illness and/or mental illness. People with many of these conditions see themselves in the way she has to take daily elixirs to manage her curse and the way it touches every area of her life, while she also tries to make the best of it and keep a positive attitude.

An episode I, as a chronically ill and neurodivergent person myself, particularly appreciated was Season two’s “Keeping Up A-Fear-Ances,” in which Eda’s mother is introduced as a figure who keeps looking for a cure for Eda’s curse against her wishes and ends up harming her in the process. Ultimately, she sees the error of her ways and swears to henceforth accept and respect Eda, and the way she decides to handle her curse, in full. Not being listened to when it comes to the management of one’s disability or illness feels sadly familiar, and I am very grateful that The Owl House took the time to address this issue in their show.

Fans have also speculated about Eda’s sexuality, aided by the little bi flag seen on her cheat box in a shot of an episode in the first season. Because why would a character who shucks all norms be heterosexual, after all? 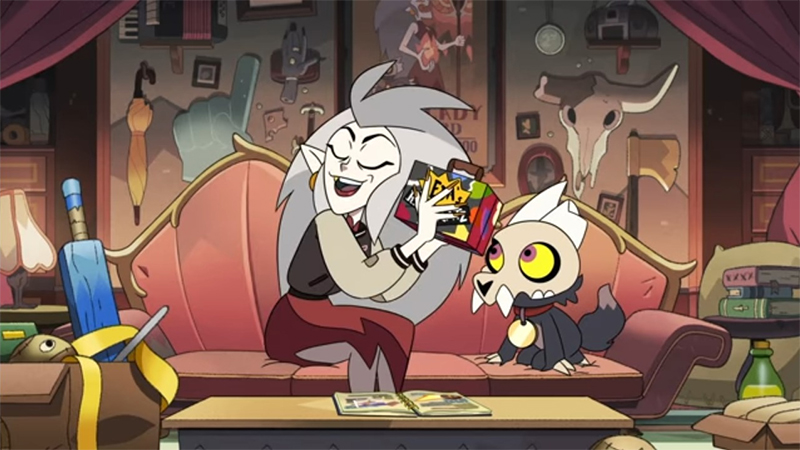 This, however, remained in the realm of hypothesis until the season two episode “Eda’s Requiem” introduced Raine Whispers, who was advertised as “a witch from Eda’s past” and confirmed as nonbinary on social media. The show goes the route of their gender being accepted as perfectly normal, with they/them pronouns being used for them without comment. Raine’s character is anchored firmly in the story from the get-go, as they are introduced when they are appointed head of the Bard Coven, one of the most high-ranking positions in Boiling Isles society. At the same time, this introduction establishes their personality by requiring them to make an acceptance speech in which they stumble over their words and ultimately run off stage in a panic. Soon, however, we learn that they have a hidden agenda: all these years, they have been working toward building a resistance to the Emperor’s restrictive and punishing reign, and they credit Eda with inspiring them to do so when the two meet again. We see this via flashbacks.

One shows a younger Raine and Eda on a hill, and Eda is playing Raine’s Rhapsody, an instrumental piece she appears to have composed for them, and gives them a speech about facing their fears. “Just give ‘em a whack right in the face”, she says, and she’s talking about the performance they skipped out on to hang out with her instead, but they seem to have taken it to heart and remembered it when they discovered how corrupt the coven system is, ultimately causing them to plot their rebellion. Due to the show’s tragically shortened run, there isn’t much time to develop a character introduced this late, but the show’s crew uses every opportunity to flesh Raine’s character out as much as possible. 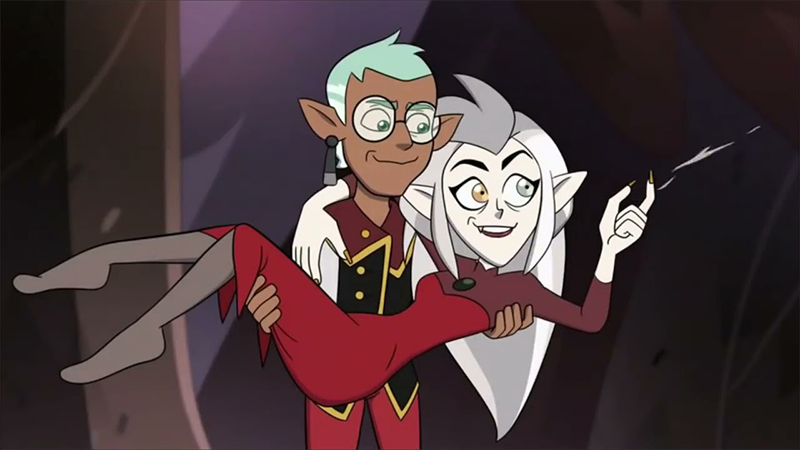 Eda and Raine’s love story parallels Luz and Amity’s in the way it slowly develops in sometimes beautifully understated ways. No big declarations of love are made, but the way they blush around each other and declare their worry and care for the other speaks volumes. In Knock Knock Knockin’ on Hooty’s Door, Eda is fed sleep-inducing cookies by a well-meaning Hooty, leading to a series of flashback-dreams in which she grapples with her past and the Owl Beast. The first part shows a teenage and likely recently cursed Eda accidentally attacking and permanently injuring her father when he sets off a party popper that triggers her curse. In the next part, she and Raine are confirmed to have dated in their youth, only for Raine to break up with Eda for lying to them about their curse and pushing them away emotionally in the process. It’s hardly far-fetched to say that Eda’s previous experiences with the curse caused her to always keep Raine at arm’s length because she was afraid of hurting them.

As someone who has pushed people away due to mental illness before, I certainly felt for Eda in that moment, even as Raine’s perspective was also perfectly understandable. When they reunite in the present day, they bond over their distrust of the restrictive coven system and desire for change, kicking off the rebellion against Emperor Belos in earnest. Because as Eda once inspired Raine, she is in turn inspired by them: to see the bigger picture, think beyond herself, and begin to believe that systemic change is possible. And this is really what makes this a great love story for me, one where through each other, the characters gain a deeper understanding of themselves and the world around them. 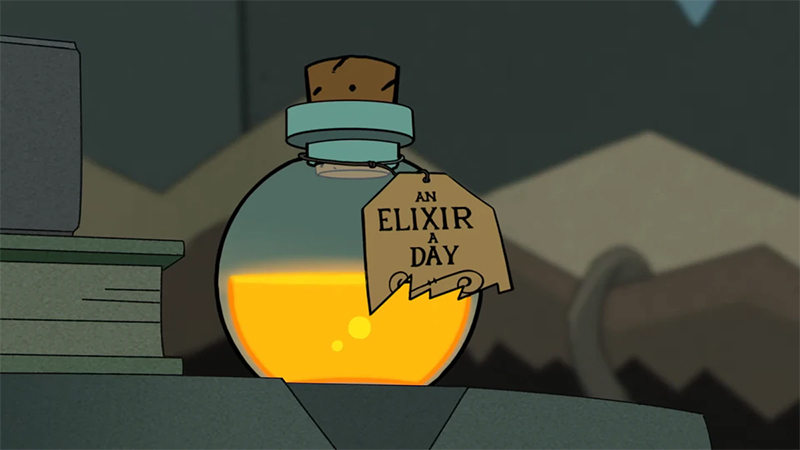 In a time when non-binary people seem to be mostly thought of as a new phenomenon that mainly appears among young people, it is quite momentous for a cartoon to introduce a non-binary character that is middle-aged. It also reflects reality, as even celebrities in their thirties and forties have come out as non-binary in recent years; such as Queer Eye star and voice actor Jonathan van Ness, actor Sara Ramirez, or Japanese pop star Hikaru Utada.

And for The Owl House to have both a queer ship between teenagers and one between older characters is equally important. Luz and Amity tell queer kids they have a present; Eda and Raine tell them they have a future.

Vallie has written 1 article for us.