I keep saying over and over to anyone who’ll listen that the best queer representation happening on TV right now — and, in fact, in the past eight years or so — is in the form of queer cartoons made by queer creators. And the penultimate episode of The Owl House‘s second season just proved me right. AGAIN! Our heroine, Luz, has gone from enemies to girlfriends with mean-girl-turned-good-girl Amity Blight. They’ve danced around their feelings for each other (literally and metaphorically). They’ve hugged it out. They’ve confessed their crushes. They’ve gone on dates, kind of. Mostly they’ve just been trying to save the world together. They’ve held hands. And they’ve pecked each other on their cheeks. And now, our magical queer love birds have kissed! Right on their adorable cartoon mouths with cheeks blushing like boiling rain!

It’s a first for main characters in a Disney cartoon, and it’s perfect. 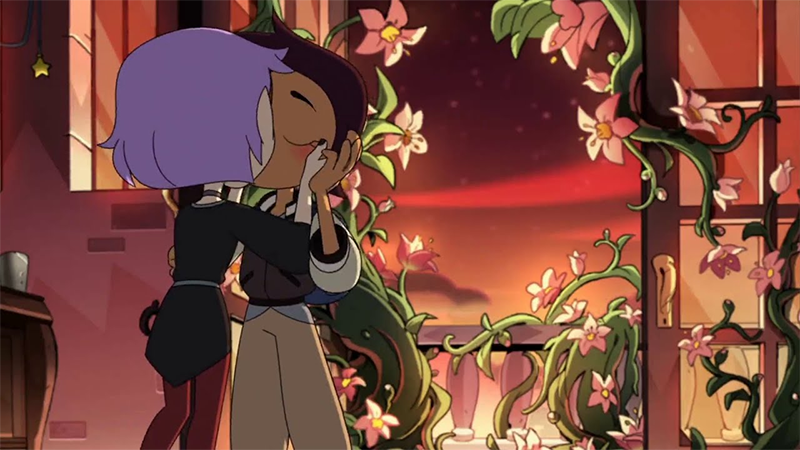 It goes like this: As Luz & Co. prepare to face down Emperor Belos at the Day of Unity celebration, Amity, finds herself locked in her bedroom by her overbearing mother like some kind of Rapunzel. Her mom knows Belos is going to destroy society, and she doesn’t care; she just wants to be part of the ruling class when the new world order drops. The rest of the family? Not so much. Amity paces around and tries to figure a way out of the situation, wondering aloud what Luz would do to escape if she was trapped like this. She needs to get out and save her girl! But the whole time she’s walking in circles and worrying, Luz is outside taking down a whole army of guards three times her size. She climbs some magical vines, bursts through Amity’s window, and — *swoooon* — Amity rushes over and kisses her.

They both seem kind of surprised, and kind of shy, and also so very in young gay love.

The Owl House has already broken down a dozen barriers, so there was no doubt in my mind that creator Dana Terrace was going to fist fight Mickey Mouse to make this happen, if she was forced to. But that didn’t make it any less rewarding. The slow build and endless surprises of Luz and Amity’s sweetest ever romance are a billion times better than all the Disney Prince + Princess stories combined. And, unlike other cartoons that have paved the way with their kissing queers (like She-Ra, Adventure Time, and Steven Universe), this one is geared toward even younger audiences. Most of the time, Disney is too afraid to even casually mention a straight character has some gay off-screen parents. Terrace has pushed them to be exactly who they need to be right now. 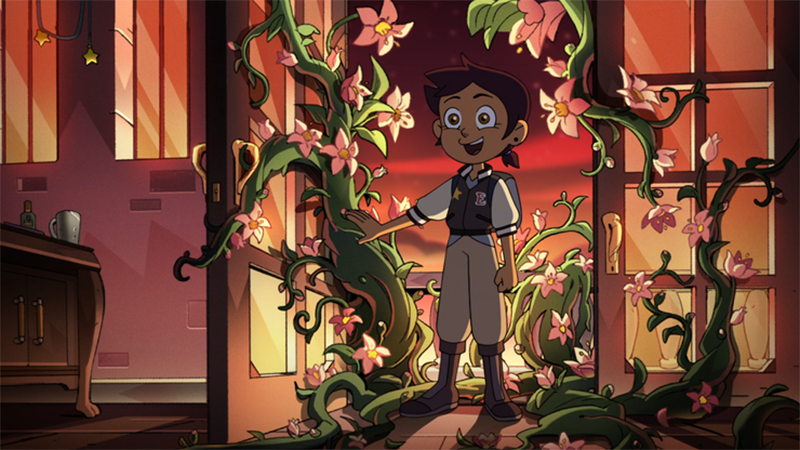 The season finale of The Owl House dropped today, and I don’t want to spoil anything for you, but I will say that Luz and Amity’s relationship takes another huge step forward. A third season is on the way, but it won’t be a 20-episode regular season; it’ll be three 40-minute episodes. I have no idea how Terrace and her brilliant collaborators will wrap everything up in that time, but I trust them like they’re my witchy psuedo-mom with wild magic hair and a quirky haunted house.

Until then: Hoot hoot, my friends!