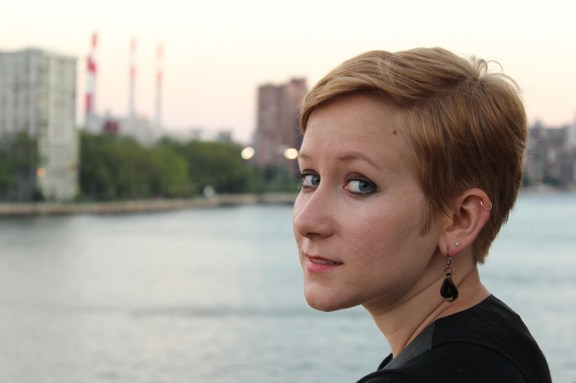 Jana Fisher writes sweet lyrical pop that’ll likely resonate with people who are finding their feet. The child of a minister, Jana’s music career began at churches and corn festivals in rural Ohio. Following a family-forced move to Florida and the release of her debut album, A History of Sleepwalking, she followed her heart to New York City and completed her “evolution from naive choir girl to self-aware and articulate artist”. She describes herself as “a good girl everywhere but at the piano”, which is kinda hot.

Late last year Jana released an EP titled Ideals & Deals, which showcases some memorable pop hooks and an angelic voice. It’s her first record since coming out as a queer artist, and you can download it for free. Up next she’ll be releasing the music video for her second single, “If I Ever Break Your Heart“.

Lyrical piano pop. My latest release, Ideals & Deals has a spunky, folky feel to it. I wanted everything to feel live and a little dirty.

I’ve been playing piano since I was six. I’ve dabbled in other things— electronics, bass, guitar— but piano is my home.

My song “30k,” which is a somewhat tongue-in-cheek tale about the New York dream and being broke.

Writing helps me process emotions that are complicated or a little too raw to talk about. For the longest time I was completely unable to write songs that weren’t angry or melancholy. I’m trying to work on that. I’m actually a reasonably happy person!

I wrote a song called “Another Layer of Sorry” about the boyfriend I had when I came out… Poor guy, he was really nice and I put him through a lot. Every time I look back on that I have to laugh at how oblivious I was.

I’ve gotten really into cooking since I went vegan about a year ago. I love how putting limitations on the ingredients you can work with forces you to be more creative. I’ve gotten into making all sorts of ethnic food I never would’ve touched before. It’s extra fun when my omnivore girlfriend begrudgingly admits to liking my rabbit food.

Fiona Apple’s Extraordinary Machine. I don’t even think that’s her best album but it’s the one I relate to the most. It carved out a little spot in my heart.

I had this horrible job as a guest list girl for a nightlife promoter. Every Friday and Saturday I had to put on heels and dresses I’d never wear otherwise and stand outside a club for four hours, even in the dead of winter. The worst part was these people would drive in from New Jersey or Connecticut all excited for a hot night on the town and I had to charge them an exorbitant amount to get into a club I knew was dead inside. It totally killed nightlife for me.

I’m making my way through A Song of Ice and Fire now. After watching the first season of Game of Thrones I got anxious for the next season and started reading the books. I don’t know what I’m going to do when I finish A Dance with Dragons. Just tell me who Jon Snow’s mom is already!

I want the career Aimee Mann has had! Even after so many albums, she’s still making wonderful, carefully constructed music and seems like she’s managed to keep her sanity.

Sadly no! I grew up always having cats, and I’d love to have one now, but I haven’t quite talked my girlfriend into keeping one in our tiny NYC apartment… yet.