Unfortunately, autostraddle dot com was down until recently (Did you know Autostraddle was down?) Chances are, you noticed and you emailed Riese, and not Tess, or asked someone about it on formspring.me, but did not email Tess. While you were doing homework and contemplating abandoning the internet, and our domain, forever despite continuing to reload the page and oh my GOD why isn’t it loading still? (stay tuned for a post on the topic of there being no posts later this evening), we were keeping track of the things we wanted to tell you.

While Autostraddle was down, a lot of things happened.

Some of them centered around teenagers:

+ At a few schools, homophobia got a big thumbs-up: on Tuesday, Neuqua Valley High School in Naperville, Chicago, was told by a District Court judge that administrators could not limit the “free speech” of their students – and therefore upheld the right for students to wear shirts reading “Be Happy, Not Gay,” and “Be Happy, Be Straight.” My guess is that these shirts make gay people and nice straight people unhappy. (The shirts were made to combat kids participating in Day of Silence, which was commemorated with a tee shirt.)

+ Students at Harding University calling themselves the “HU Queer Press” launched a website to talk about the gay/lesbian experience at their Conservative Christian school on Wednesday morning. By four p.m., school administrators had already blocked the site.

+ Meanwhile in Texas, the validity / importance / existence of “Gay/Lesbian Clubs” is being called into question.  Rachel wrote about this and you can read it here.

Some of them were about adults acting like “lovestruck teenagers” instead: 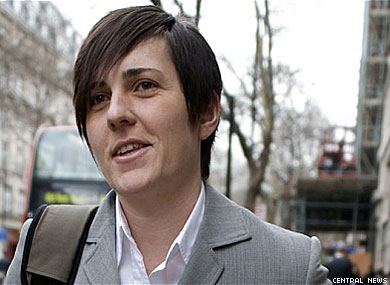 A lesbian Army captain in the U.K. Royal Military Police, Karen Tait, was sent home from Afghanistan because of a relationship she had with a Sergeant prior to deployment. She is openly gay. Tait denies that the relationship continued while she was on tour, and also denies that it clouded her judgment. But it may be too late, because she was caught in the SCANDAL OF ALL LESBIAN ARMY SCANDALS. Yes, that’s right, Karen Tait was seen running sunscreen into the Sergeant’s hand. And because of this, she now faces a military tribunal. Tait claims that her forced leave of absence, and the way her relationship is being treated, is really about discrimination based on her sexuality. (SURPRISE!) You can judge by reading some excerpts of the gossip her colleagues spilled to the Guardian:

The staff sergeant said the two ‘selfish individuals were out for themselves’ and Cpt Tait was a ‘disgrace’.

Another experienced officer said they were ‘so wrapped up in themselves it’s nothing short of criminal’.

And lastly, there is a new bunch of news concerning adults:

+ Prop 8: In California, the gay marriage debacle is clearning up – with some help from the Attorney General. Kamala Harris on Tuesday requested that marriages be granted in the state once more, beginning immediately. This is, quite obviously, a blow to the backers of the gay marriage ban in her state. Her decision comes for a few reasons, including the recent Obama decision on DOMA. She also feels that the fight over Prop 8 will ultimately be “fruitless,” no pun intended, and that it is a waste of time to let it continue.

+ Adoption: And in the ultimate case of turning the world upside down, a heterosexual couple in Britain was denied the right to adoption because they disapprove of homosexuality. Yes, you heard that right. Potentially the best thing you missed while Autostraddle was down was the imagery of a social worker taking that couple to town because they inteded to teach their kids that the gay lifestyle is “immoral.” In today’s Britain, after the passage of the Equality Act 2006, that is considered religious discrimination. The law also makes it impossible for Christian adoption agencies to deny service to gay couples seeking out children. (They reacted by closing down.) So, um, double yay! It seems as though the law has made life better for all of the gays in Britain – leading me to wonder what good a similar piece of legislation could do here.

So, while Autostraddle was down, indeed a lot happened. You looked great the whole time. And now that we’re back, we’ll always have you covered.