Have you heard about The Peculiar Kind yet? Because, you know, we keep talking about it and stuff. A product of Brooklyn art collective, The Artchitects, TPK is an honest, thoughtful, intelligent web series created by and featuring queer women of color. The first episode, which premiered last month introduced us to a cast of five super dope women who had a ton to say about sex, community and safety. The second installment, whose topic, gender roles, was inspired by a woman the producers of TPK met on a night out, saw an expansion in the cast with the addition of two new women.

The producers of TPK, Mursi Layne and Alexis Casson, found the original cast through networks of friends and acquaintances, and now, in a concept that we here at Autostraddle obviously very strongly support and believe in, they’re using the Internet to find YOU! They’re looking for four rad people of color to hop on the TPK bus for an episode and share their sagely awesomeness with the world. Think about it: it’s an opportunity to participate in a lesbian reality series that does not require you to go out to the club and yell at somebody’s ex-girlfriend for two hours. I would list the criteria needed to apply, but they made this flyer that tells you everything: 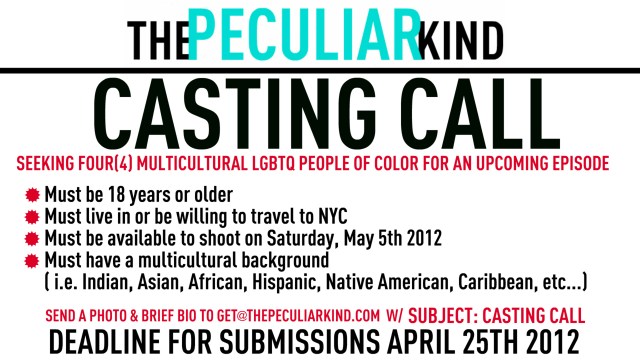 But if that’s not reason enough, then there’s this: the only thing better than consuming media that actually reflects your life is participating in it! The Peculiar Kind wants to give you that chance.

So go ahead, be the media you want to see in the world.