As part of our No Justice, No Pride programming, our trans subject editor Xoai Pham has curated a five-part series called the Principles of Pride. The series unpacks the foundational values that clear a path forward for the LGBTQ movement, values that would make our ancestors proud. This is the third in this series; you can read the first two here.

I write this article as a Black Indigenous (Zapotec) nonbinary femme migrant. I use “Indigenous” and “Black,” at times, as interchangeable categories as I cannot separate my Blackness from my Indigeneity and vice versa. When I reference “trans” people, I include myself as well as those who are third, fourth and fifth gender individuals in their own communities. I understand that the category of “trans” does not make sense to some Indigenous kin whose traditional cultures already betray gender binaries enforced by the West. This article also centers my embodied experiences of surviving the violence of U.S. federal law, which means that it does not fully account for the legal systems outside of the connected 48 occupied U.S.-states.

As I begin this piece, I remember it is only June. Just last month, we honored and witnessed another National Day of Awareness for Missing and Murdered Indigenous Women, Girls and Two-Spirit People. This should not be our reality. We must address and abolish the systems that identify and target Black and Indigenous women, girls, and two-spirit people because if they are not free, as Audre Lorde reminds us, none of us are free.

Pride was not simply a riot. For Black and Indigenous trans, gender nonconforming, two-spirit and gender-expansive people, pride is still a riot. We have never had the privilege of parades. In order to comfortably participate in a parade, we have to first be acknowledged as a people who are valued and protected by the communities we supposedly belong to.

How can Indigenous people in the U.S. celebrate pride when American Indian women are murdered at 10 times the national average? Indigenous people were assigned an abstract citizenship that has never been upheld and protected by the U.S. empire. What is a pride parade to an Indigenous person whose land is occupied by the same people who march in the parade?

For Black communities alike (many of whom are also Indigenous), what is pride when the people who march with you are the ones calling the police on you? None of the murders we have witnessed as of late are accidental. The murders of Tony McDade, Nina Pop and Monika Diamond all live in a constellation. If the world each of them inhabited wasn’t invested in white supremacy, they would all be alive.

Pride has never been a parade for those of us who continually survive the empire’s plan of Black and Indigenous extermination. So, we riot. For some, the riot takes place in the public domain — we destroy public property because we were once private property and continue to live in its afterlife. We break down buildings in the ways our bodies were broken down via the horrors of the TransAtlantic slave trade, plantations, fugitive slave laws that legalized not only brutality but public execution. We continue to face Jim Crow segregation and the public lynchings of the twenty-first century brought upon by a society invested in policing (not only in the actual police department, but policing people on the basis of race, gender, body size, ability, and more). In this rioting, we demand to be seen as more than property; we demand a humanity that is no longer surveilled, disciplined or punished for existing. We riot by taking machetes to the forest in the early mornings or nets to the water in the hope that we can find our missing and properly say good-bye to them. We riot — as Runa-Kañari poet Sonia Guiñansaca reminds us — by adorning our bodies, walking out the door and demanding the world to see us in all of our genders and lack of gender(s).

In Walking with Ghosts, two-spirit Cherokee poet, Qwo-Li Driskil asks, “Who gave your body back to you?” I sit with their question and ask: how can I give my body back to me?

As a Black Indigenous person, I feel that my body always belongs to everyone but me. I think of the day an older woman approached me at a bus stop and slapped my mouth to remove my lipstick. I remember the shame I felt that day. I remember the day I was chased out of the A-train in NYC by a man with a pocketknife. I remember blaming my femininity on both occasions and never considering the fact that it was other people who caused the violence (including those in my own community). We have to demand the space to name our experiences and be believed as experts of our own lives, as opposed to being questioned about what we have lived through.

I want the world to no longer assume ownership of our bodies, but we cannot do that without land. Decolonizing the land itself is not only crucial but necessary for a liberated future in which everyone’s body belongs to themselves.

I want the world to no longer assume ownership of our bodies, but we cannot do that without land. Decolonizing the land itself is not only crucial but necessary for a liberated future in which everyone’s body belongs to themselves. The land is always in relation to kin who are trans, gender nonconforming, two-spirit and gender-expansive. As a Black Zapotec, my grandmother tells me that our ancestors survived slavery by learning how to shapeshift into other organisms. In an audio recording from last summer, my grandmother explains that shapeshifting like butterflies and dragonflies is a skill that we have lost. She then interrupts herself and tells me that not all is lost: she names the Muxe people a few villages away. Muxes are third-gender Zapotec relatives who are assigned male at birth under western categories of gender, but they take on the traditional roles supposedly assumed by people assigned female at birth in the west. Muxes elongate everyone’s quality of life because many grow up to be traditional curanderas (healers) whose herbal remedies and ceremonial rituals arrive to them in dreams. Decolonizing the land means centralizing Indigenous cosmologies into our everyday. Decolonizing the land requires the abolition of property and ownership as well as unlearning what we think we know about gender. We must abolish patriarchy in order to decolonize the land; we must abolish gender discipline. Patriarchal violence breaks apart communities and if communities are torn apart, they cannot care for the land, the very condition of possibility that makes human life possible.

To decolonize the land, we must not only denounce anti-Blackness but abolish it. African diasporic people who arrived on this continent as chattel have also become stewards of the land. My grandmother teaches me that we Black Zapotecs could not exist if there wasn’t a mutual commitment between Black and Indigenous people to protect the land in Oaxaca and each other’s knowledge (including shapeshifting).

Many Indigenous communities are also nomadic and in order to truly understand the nuances of trans Indigenous experiences, we have to understand the fact that at the level of conquest, the first point of attack is relationality: relationships between people and others in their own community and the relationships between people and the ecological world. Our struggles as trans Indigenous people starts with other people. How can the land protect us if we do not protect each other? How can we decolonize the land if we continue to perpetuate anti-Blackness and patriarchal violence?

Black and Indigenous trans kin, we are the future. Our daily choice to be in this world is an interruption to elimination. I do not want any of us to romanticize our struggle and traumas. What we have been through is inhumane.

Our survival today, yesterday and the day before is evidence enough to know that our values as Black Indigenous trans people are the values needed to move beyond empire and towards an unsettled future.

I dare all of us to believe in our leadership. We must no longer look down. We must speak our needs, desires and values out loud. I need non-Black and non-Indigenous LGBTQ folk to listen to us. I need you all to back us up, to make space for us, to fight for us so that we can fight with you, because we’ve always been rooting for you. Will you dare to root for us too?

I also need non-Black Indigenous kin to face their internalized anti-Blackness. I need them to understand Black struggle as an Indigenous struggle. I need Black and Indigenous cisgender LGB communities to do the deep work of understanding how, under a settler empire, they benefit from the project of trans extermination. I also need them to understand that the same project of trans extermination, while it benefits them, is also indirectly moving towards their own extermination. Because the end goal is a monolithic society, where all of us are willing pawns under the empire. I need all Black and Indigenous people regardless of gender to commit to unlearning patriarchy.

When Igbo-Tamil sibling, Akwaeke Emezi writes, “It was difficult to accept not being human but still being contained in a human body,” what I understand as a fellow Afro-Indigenous trans kin is that it is difficult to accept our hyperhumanity in this world. We will be misrecognized over and over again. By hyperhumanity, I identify our ability to imagine liberation even in the darkest of times. I think back to National Day of Awareness for Missing and Murdered Indigenous Women, Girls, and Two-Spirit relatives: we are hyperhuman because we do not stop searching for one another until we find our kin. We are hyperhuman because we choose the right to mourn and grieve when death occurs. We are hyperhuman because we riot in the hopes that we will achieve a joyous future. Black and Indigenous people have offered me the largest frameworks of care ever since I was a child.

An experience of hyperhumanity is one that is always committed to being a better relative; it is a commitment to care. The first step to offering care is to address who we haven’t cared for, why, and how we will unlearn that neglect. Will you unlearn with me?

Dearest kin: our hyperhumanity has taught me that in the future we are all architecting, we will live, we will be safe, we will love, we will laugh, and we will continue to experience this life that we call ours. 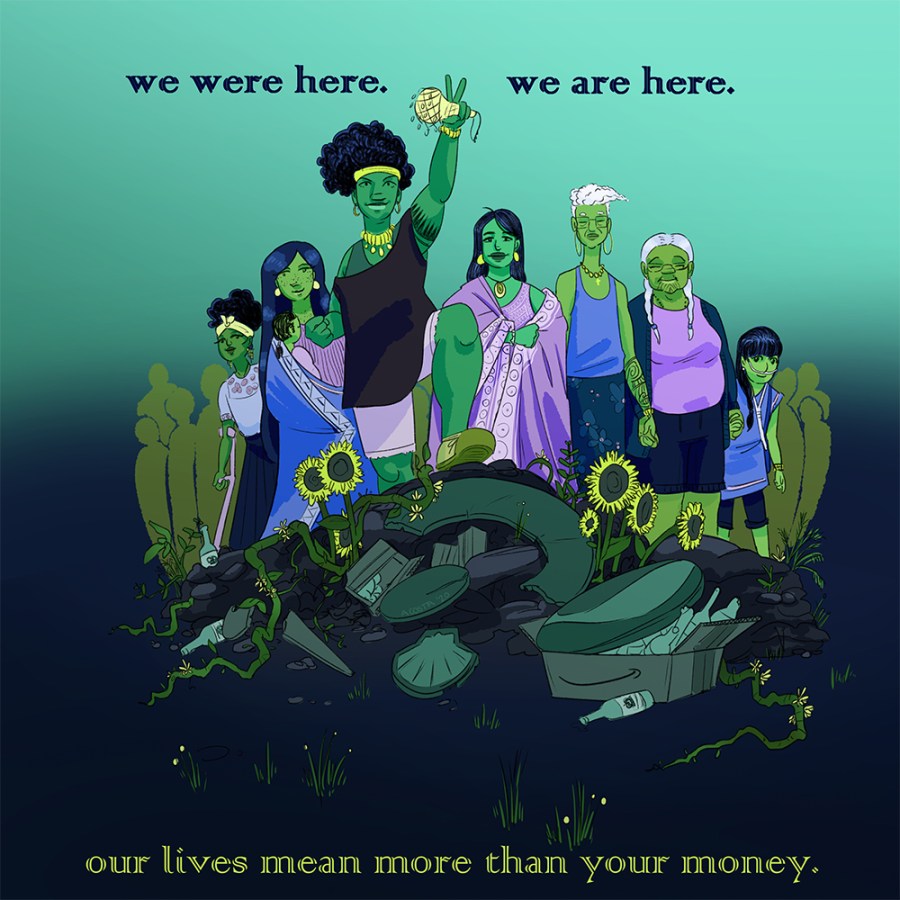 Alan has written 1 article for us.