Welcome to the next edition of Pretty Little Liars Fashioncap, the article where I talk about how to dress like 25-year-old actors pretending to be 16-year-old high schoolers dressed like 21-year-old lesbian runway models.

The costume designers for PLL totally listened to my critiques last week and gave Samara and Emily some cuter things to wear! In fact, we open on the liars wandering aimlessly around outside, Emily wearing this: 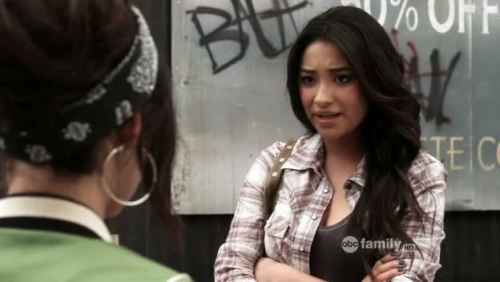 That’s right, Emily wore a plaid shirt! Look how freaking adorable she is with those mother of pearl snaps and double breast pockets! Although my fact checking was only Google searching “Emily Pretty Little Liars Plaid,” I’m going to say this is the first Emily Plaid Incident. Thus, this is grounds for celebration and the buying of plaid shirts.

I’m really not done celebrating, but I’ll move on since we haven’t even hit the opening sequence yet. But wait, Aria? I get that this is a look, but I’m still unclear who’s look it is. Miley’s? Tupac’s? There were too many jokes to make, so I made a collage. 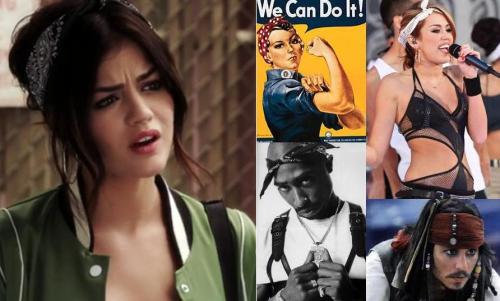 Oh that's who Tupac is

Moving right along, everyone is getting ready for the next day at school. Aria, Spencer and Hanna are wearing boring straight girls things that I don’t care about. Emily, on the other hand, is wearing A SHIRT WITH A G*DDAMN TIGER ON IT. This must be how she gets the girlies. I’m thrilled. 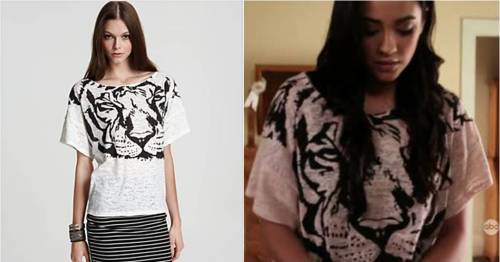 Just go around throwing your cat at everyone

Except here’s the bad news: that shirt (Bianca Tiger Print Tee) is sold out. It probs sold out the second every other girl like me went on shopstyle.com and looked for it. But wait! You can totes wear other tiger shirts. I actually think this is a cool look. Also, although Emily is wearing a skirt (I take back what I said last episode) I think this would look really hot with black shorts. Think about it.

Anyhow, then some other stuff happened involving Hanna and her feelings, but I didn’t really care because no one changed their clothing and feelings are out of style this season. But then there was a scene involving Aria which lead me to a completely non-fashion question that I just really need to ask.

What the hell is this? 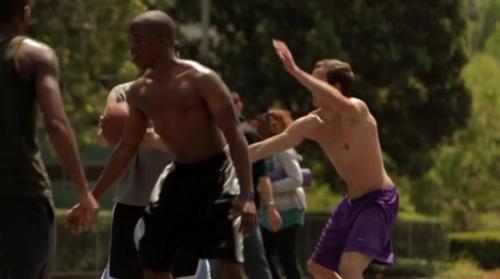 Unfortunately, this all transitioned to a five minute scene in the middle of the episode where there wasn’t any clothing to even talk about. Also, I got really confused because I didn’t know they changed actors for Jason. Apologies if you were hoping I was going to link to all of this seasons cute new basketball shorts.

Moving on from the soccer game, two things are very clear: Samara still isn’t wearing any colors, and Pam is still the most adorably dressed mom ever. 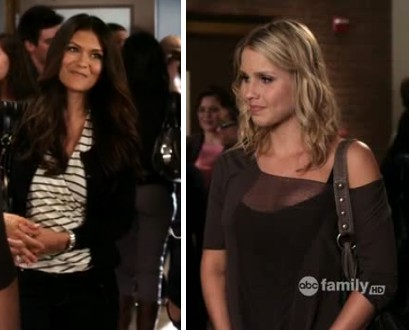 Samara just realized that Emily's mom dresses cuter than her. Not happy.

After it became apparent that there was actual gay stuff to comment on, I sort of stopped paying attention. There were some more vague scenes with Aria plus a really dimly lit one with Spencer. The heterosexual double date didn’t really tell us anything about fashion except that Hanna read our advice about dating and knew to dress to impress. To the tune of a $275 Vena Cava blouse. 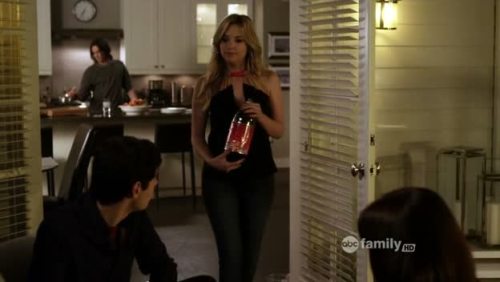 Cute that it matches the coke bottle, but no one's going to buy it for $275

Lucas freaks me out, so I was pretty psyched when the show shifted to the next day and we got Super Lesbogay Fashion from Samara. This outfit is so gay that lesser gay outfits orbit it. If this outfit were a TV show, it would be on Showtime and be called The Real Lesbian Outfit Word. If this outfit was a monster, it would be Gayzilla and tromp around closets terrifying your Doc Martens. 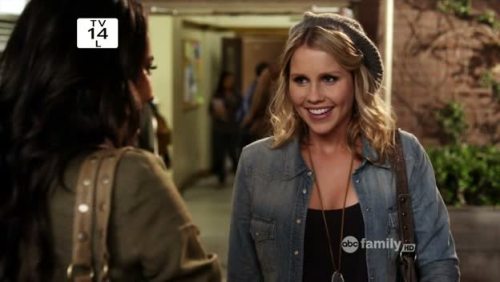 They still won't show me her legs

Next week, Paige will find out about Samara, and I’ll show you what outfit to wear when you freak out and egg someone’s house!

Thanks to Intern Grace for the screen caps and Fashion of Pretty Little Liars for help finding Hanna’s shirt.