Friends, hello! Please accept my bended-knee apology for the lateness of these last two Pretty Little Liars recaps. Technology and my health have been conspiring against me, but three trips to the doctor and two trips to the Genius Bar seem to have gotten things back on track. This is a shorter recap than usual, but I promise to make it up to you after tonight’s all-new episode!

Previously on Pretty Little Liars Mike told Aria about how Mona was working on a plan to frame Alison for her (fake) murder and unmask A by collecting a full refrigerator of her own blood. Spencer got her brain completely scooped out and replaced with SpaghettiOs by a rambling wreck named Johnny. Emily broke up with Talia (kind of?) because Talia’s husband came a-callin’ at the coffee shop talking turkey about bisexuality. And Hanna danced like your childhood dreams of flying. 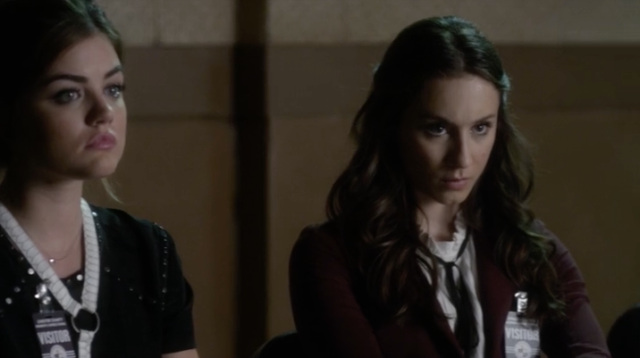 We’re here because we need you to cast a tie-breaker vote for Best Liars in Love. Sparia or Hannily. 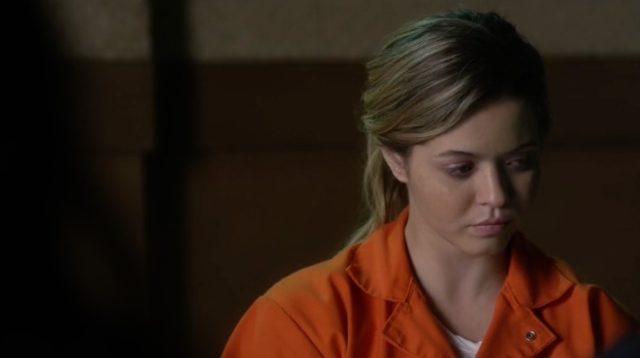 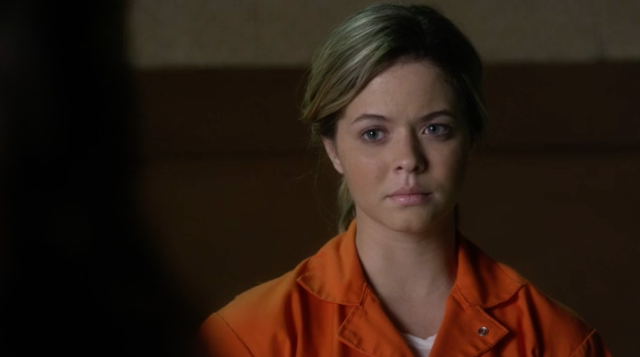 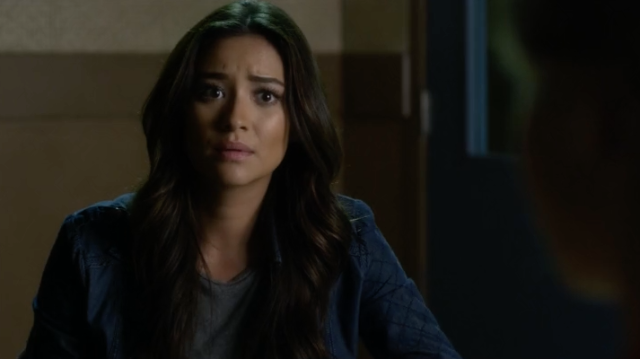 The Liars hit up the Rosewood Federal Penitentiary and Inevitable Baby Doll Hospital to apologize for that tiny thing of having Alison tossed into jail for a murder she did not commit. They explain how Mona’s plan to stage her death and frame Ali probably actually got her killed, and then Aria amazingly, hilariously, chivalrously defends the Vanderjesus: “Once she found out who A was, she was going to come back home and be like, ‘LOL, Tom Sawyered, y’all!’ And then you would have gone free!” This does not do much to console Alison, that Aria Montgomery of all people is now Mona’s most ardent worshiper. Well, besides Hanna, obviously. And Hanna’s not even here. Aria again: “Hanna had shit to do, Ali. God, get off our nuts. You’ve barely even been in jail a few weeks.”

What an upside-down world we live in where Aria has stealthily scooted in under Hanna (hey-o!) as the best Liar this season. Guess who we’ll blame for Spencer’s tumble to the bottom of the list? Oh, it’s Fucking Johnny, all right.

As the Liars are getting ready to go, Ali tells Aria she’s going to dime out Mike so hard it’s going to make everyone’s heads spin around like Poltergeist. Aria begs for some more time for Mike to solve things, and Ali’s face is so perfect. It is the absolute perfect “Are you fucking kidding me” face.

It’s been a long time since I believed Ali was a bad guy. A long time. But when she gets out of jail, I kind of hope she starts torturing these guys (again?). They sort of deserve it. 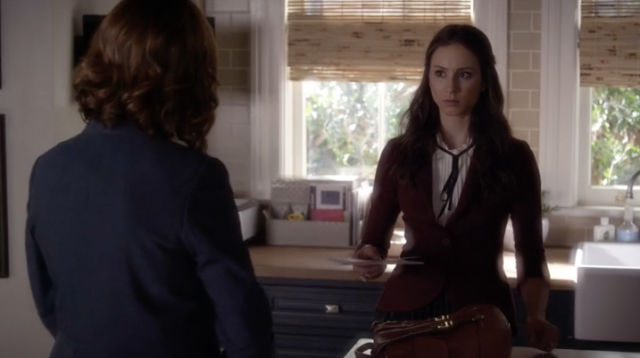 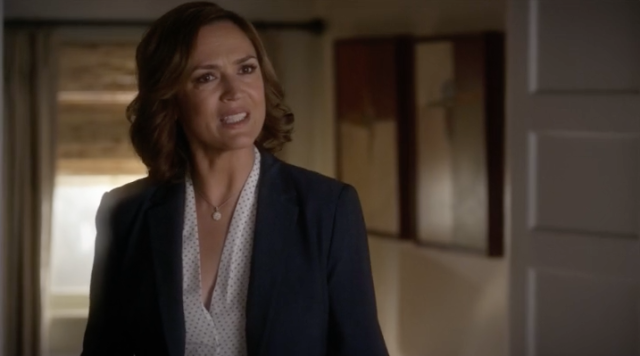 You tell me, Spencer. Sparia fan fiction? In your college application folder? You have become consumed with lesbianism!

The Liars disperse. Spencer goes home to find Veronica marching around the house in a livid trance. She cannot believe Spencer went to jail to hang out with Ali when she is under investigation for one half dozen crimes herself. She tells Spencer to pack up her shit because she’s going to London to meet one of Wren’s old Oxford buddies who is going to get her into college on another continent. Probably she should be sending Spencer to Bangladesh or Yemen or Cambodia or some other country that doesn’t cooperate with U.S. extradition requests, but okay, Veronica. You do you and SVU.

On her way to work, Emily is accosted by a woman named Claire Handleman (no, for real, I’m not making that up like “Costumeshop”) who is a handler for the Glass Slipper Beauty Pageant. You guys aren’t old enough to remember her from In the Heat of the Night, and that’s okay, I’ve made my peace with that, but she was awesome on that show. Also, she was on Days of Our Lives last year, which is a fun fact because half the people on this show have been on Days of Our Lives, including Hanna’s dad who was her uncle when they both lived in Salem. TV is great! 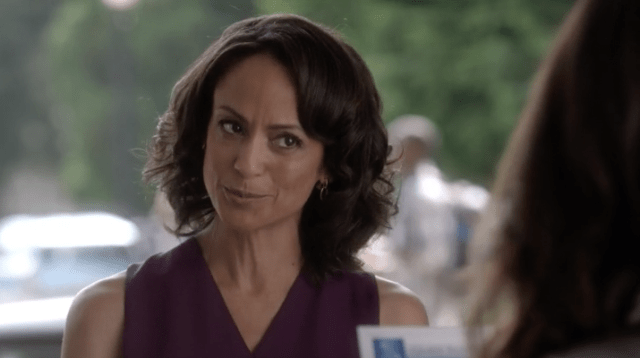 We just need your authorization to use your name in these fan fics that were submitted to the Gay Love Glass Slipper Contest. 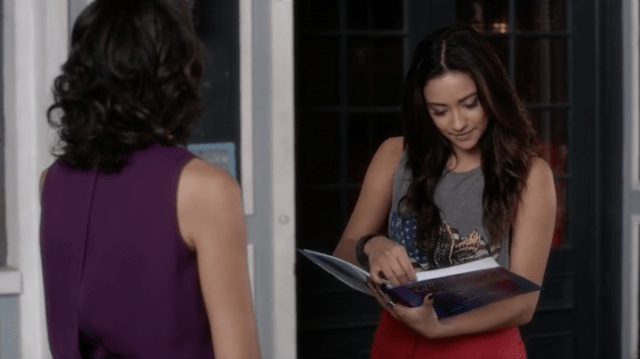 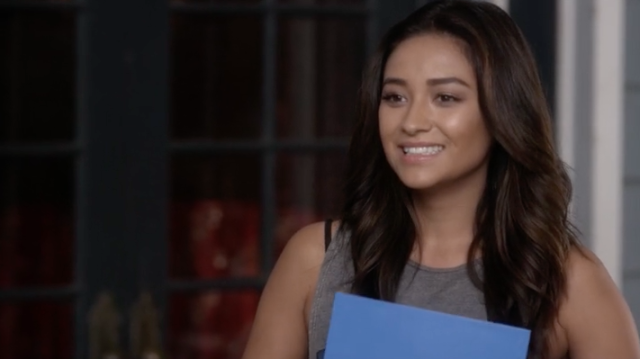 Anyway, so Claire Handleman tells Emily her mom didn’t sign her pageant permission slip, which means a couple of things: 1) Emily is still a minor and therefore not old enough to be dating Talia, and 2) Emily still hasn’t told anyone her parents vanished in the night and never came home. Emily lies and says she’ll have her mom sign the paperwork. Claire says she should have been signing that paperwork for years because Emily has always been a shoo-in for Miss Solar System.