When Aria returns home from Spencer’s, Andrew is waiting for her. They were supposed to do some studying, but she forgot due to her brain being absolutely full of theories and terror. She apologizes but he finally comes clean and says he doesn’t care about helping her study; he’s honestly just trying to get an invite to her pants party. He asks her out on a date to go see All the Presidents Men with him, says, “It’s a thriller about getting messages from a shadowy figure who knows everybody’s secrets.” Remember that time when he said, “War is a game that has to be played with a smile!” Are you A or what, Andrew? 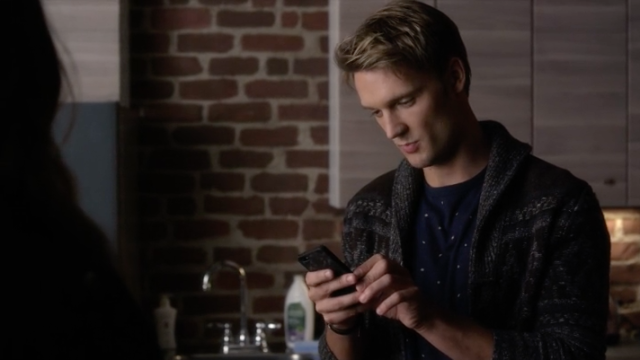 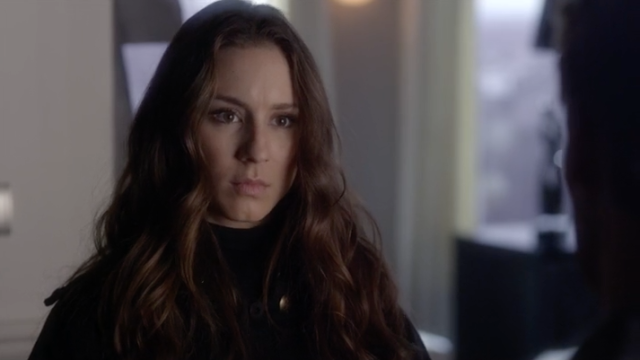 Let me guess. Naomi and … Emily.

Well, Spencer is in London. This is a thing you know because the London Eye and the Houses of Parliament and The Clash singing “London Calling” and Wren and Melissa’s flatmate talking more British slang than the entire canon of Harry Potter fan fiction written by Americans. YANKS. Remember when this guy played Kurt’s boyfriend on Glee? He always wore that hat. His name is Colin and he heard Spencer likes to be mansplained to these days, so he tells her to stop trying to contact her friends and family back home and start studying up on Oxford. (For example, Oxford is two hours outside of London. That’s a tip from me.)

Emily is on her way rehearse her sexy dancing when Talia shimmies up, Subaru loaded down with all her possessions, to tell her that she came clean with Eric and they’re separating. 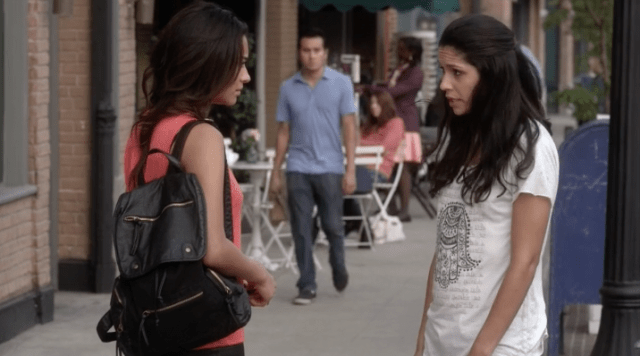 Caleb said I could crash in his old heating vent in the library.

And so that’s settled!

Aria has found Cyrus who is also maybe Hank Mahoney. He is in the hospital because he crashed his moped. She wants Hanna to come visit him with her. Hanna doesn’t want to hear it. All she wants to do is support Emily’s plan to dance Hanna into college, go to college, get a degree in — I’m gonna say — Neuroscience and Behavior Studies, marry Caleb, and move to literally any other place on earth. Aria makes those baby bear eyes and Hanna sighs and goes with her to the hospital.

What they find is a guy claiming to be Cyrus all wrapped up in bandages in the burn ward. Does that stop them from interrogating him? No, it does not. They toss out a bunch of questions about who he is and who did this to him and does he happen to know by any chance what happened to the vials of their blood he bought off of a teenage boy in a diner in the woods? He mumbles and grumbles and groans like how mummies do. And then he reaches for a pen and writes “Varjack” on a napkin. 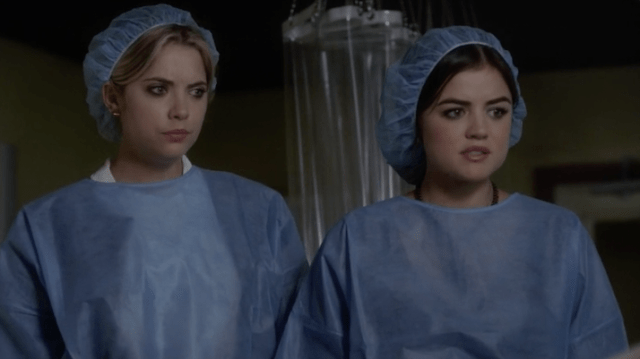 This is so gross. I liked the Candy Striper outfits better. 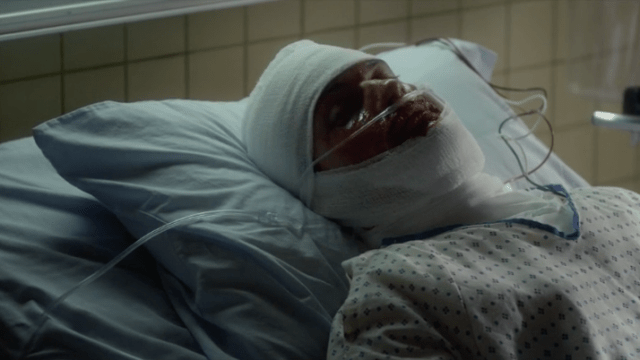 Hanna and Aria think it says “carjack” at first, so they’re trying to work out what that means when you’re talking about a guy that drives an electric scooter around. But then they decide it means “Varjack” like Paul Varjak from Breakfast at Tiffany’s, which was my first guess when Cyrus wrote that down, but I thought it meant Ezra and they think it means Ali. But then! I remembered Ali had a fake passport that was for “Holly Varjak” and so then I was like, “Oh, Cece Drake burned this man alive!” So anyway, I’m not any better at this than Aria is, and even she susses out that Cyrus never texted or emailed with Varjack, only saw him/her in person, or else he would have spelled the name correctly.

Aria is radiant this season. 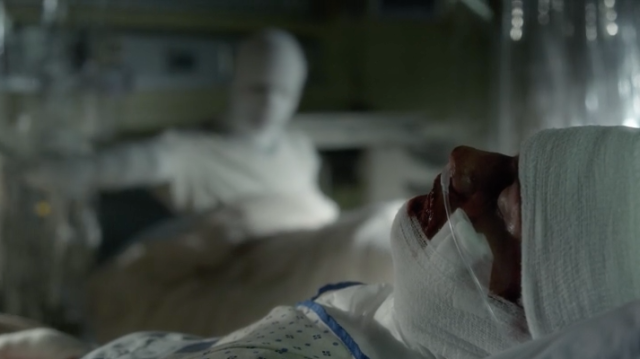 As soon as they leave the burn unit, a mummy on the other side of the room stands up from its bed and ambles over to Cyrus and murders him. Ha! I love this show so much!

Spencer’s Oxford interview happens with some guy who calls the United States “the colonies,” like he is 250 years old and mad as hell about the Boston Tea Party. Not mad at the act of rebellion. Mad that people had the audacity to waste that much tea. He tells some “jokes” about philosophy, and Spencer’s like, “I Kant stand philosophy jokes. Get it? Kant? Like Immanuel Kant? Kant stand philosophy jokes.” Professor Tweed and Elbow Patches laughs and laughs. He likes Spencer a lot. 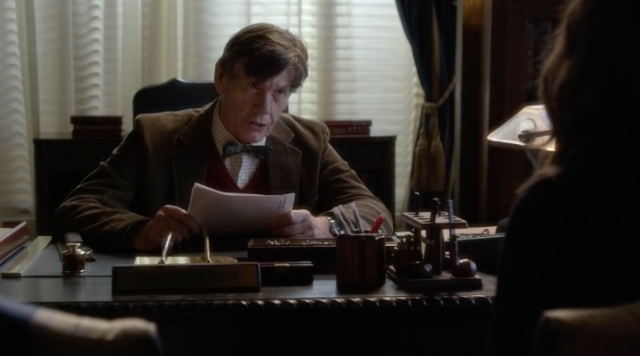 You would get on swimmingly with my granddaughter, Rory Gilmore. 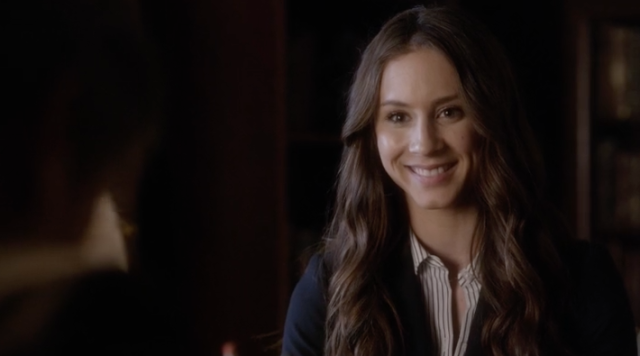 And then her purse starts bleeding. No for real. He’s points out that her bag is doing something weird, and she looks over and her bag is leaking actual physical blood all over the place. The chair. The floor. Blood, blood, blood. She can’t think of an excuse, so she just grabs her purse and runs out the door like a maniac.

Emily dances at school. It’s real sexy and everything, but I sort of prefer Hanna’s velociraptor hustle. Don’t judge me. Talia prefers Emily’s sensual samba. She gets so sprung on it, in fact, that Emily pulls her onto the dance floor for some lessons. She’s like, “No, trust me. Let the rhythm get ya. It got Hanna last week and it was like a decade of therapy in 45 seconds.”